When you review over a hundred products a year, it’s a rare thing to become truly excited about something. Yet, when Asus’ Eee PC landed in our office recently it garnered genuine excitement. Indeed, when we first heard about the Eee PC it immediately drew comparisons to the burgeoning and frankly imperfect UMPC sector. However, as we learned more about the device, it generated more interesting comparisons to such yesteryear classics as the Psion Series 5 and the legendary netBook. Is the Eee PC the natural successor to such devices? 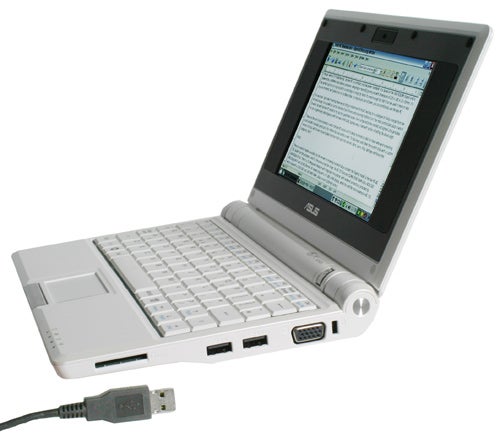 Possibly, maybe: in truth I’m in a playful mood right now, so you’ll have to follow the trail of crumbs instead. First things first though, what is it? Fundamentally, the Eee PC is a compact and low power sub-notebook. It is based on the Intel 915GM chipset and is powered by a 900MHz Intel Celeron processor. Weighing a mere 920g and with dimensions of 225 × 165 × 21~35mm, it’s the perfect size for carrying around in a small bag or simply by hand. It’s small enough too that it can be used in more or less any environment, be it plane, train or cardboard box – so long as you can sit down, you can comfortably use the Eee PC.


For example, right now I’m writing these words while sitting in Heathrow Terminal 1 waiting for a colleague to finally emerge from the Arrivals lounge. Surrounded as I am by hoards of taxi drivers and screaming children it isn’t the most comfortable place in which to work, but with the Eee PC rested on my lap it’s a good deal easier. Even compared to the smallest and lightest ultra-portables its size is appreciably advantageous, with me now comfortably working away in bed, burning the midnight oil. 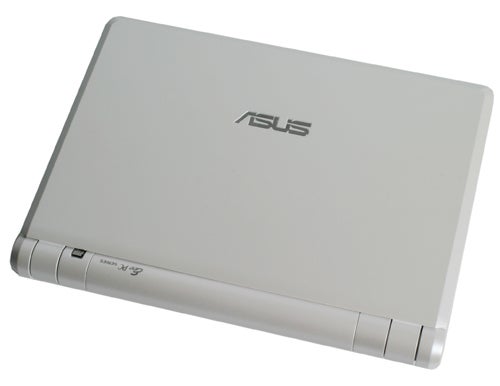 These are the sort of environments in which the Eee PC excels and it’s being marketed as ideal for those who want something small and Wi-Fi enabled, particularly for children but it’s also quite compelling for adults. To help keep costs down the system ships with a custom version of Linux, with its own intuitive tabbed interface that’s split into Internet, Work, Learn, Play, Settings and Favourites categories. Each tab is populated by a large array of shortcuts to pre-installed software and Internet services/utilities, with practically every need catered for. Before I delve deeper into the software though, let’s take a closer look at the hardware behind the Eee PC.

There are several models available, but the one we’re reviewing and which Asus considers the most desirable model is the Eee PC 4G 701. Aside from the processor, which is the same across the range, the 4G 701 features 512MB DDR2 RAM and a 4GB SSD (Solid State Drive). There’s also a 0.3-megapixel webcam and integrated microphone, with network connectivity provided by 802.11b/g Wi-Fi and 10/100 Ethernet. All models ship with a 7in 800 x 600 display, while this and the more expensive 8G 701, which ships with an 8GB SSD and 1GB DRR2 RAM, utilise a four-cell 5200mAh battery. 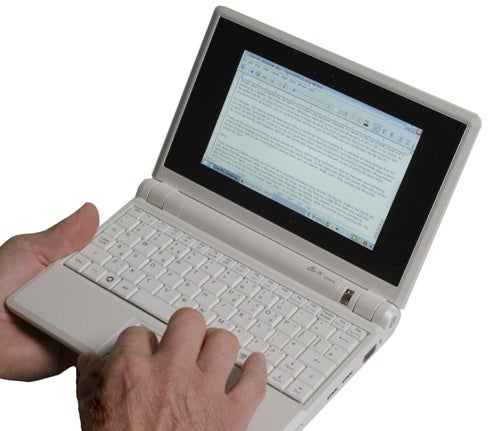 Two other models exist, including the 4G Surf and 2G Surf. Each have 4GB and 2GB SSDs respectively, while the 4G Surf features 512MB of RAM compared to the 256MB found in the 2G Surf. Each also lacks the webcam, while using a slightly smaller 4400mAh battery. In addition, in a deal with RM, the 2G Surf will be sold to schools as the RM Asus Minibook.

Given its dimensions, the Eee PC is surprisingly well endowed with connectivity. On the left edge there’s an Ethernet port, one USB port and headphone and external microphone jacks. You’ll certainly be in need of these, especially since the integrated microphone isn’t the strongest, though the speakers either side of the screen proved far better sound than one would reasonably expect.


Other connections on the right include a D-SUB port for hooking up an external monitor, along with two further USB ports and a memory card reader that supports MMC and SD card formats. Given that there’s only 1.3GB of space after the OS and applications, external storage through USB keys and hard drives will be essential. As such, it’s pleasing that Asus has managed to squeeze as many as three USB ports into the diminutive chassis.

When you consider that this model costs a mere £219, it’s hard not to be impressed with the package on offer. If all you want is something that you can surf the Internet with and write the occasional document, on paper it’s everything you’d probably want at a price that’s too good to turn down. Of course, on paper all sorts of things can appear better than they are, so the real test is in how easy it is to use the Eee PC.

It’s fortunate then that Asus has done an excellent job with the design, producing a simple, unfussy but nonetheless attractive machine. Finished in classy looking pearlescent white, it looks and feels like a product that ought to cost a lot more. Unlike other super-light notebooks like Toshiba’s Portégé R500, it feels sturdy and well put together thanks to some chunky screen hinges and a general feeling of density and compactness. Importantly, the outer casing is well protected and should make sure the screen won’t crack under the merest amount of pressure. 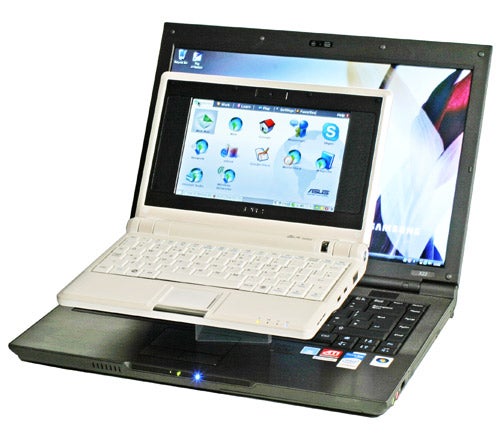 Even better, the keyboard for a machine of this size is a work of pure brilliance. For sure, it’s small and does take some getting used to, but given a short amount of time it’s perfectly possible to maintain a brisk and consistent typing speed. Keys have just the right amount of travel and provide a crisp and even response, while the layout is surprisingly decent given the size. If any further proof were needed, this entire review was written on the Eee PC and it didn’t take any more time than it would normally.


This is also helped by the software provided, with the generally excellent Open Office on hand for all your office productivity needs. Along with a word processor there’s Presentation and Spreadsheet applications, while under the Work tab you can also access Adobe Reader, as well as Thunderbird for email and a Dictionary. 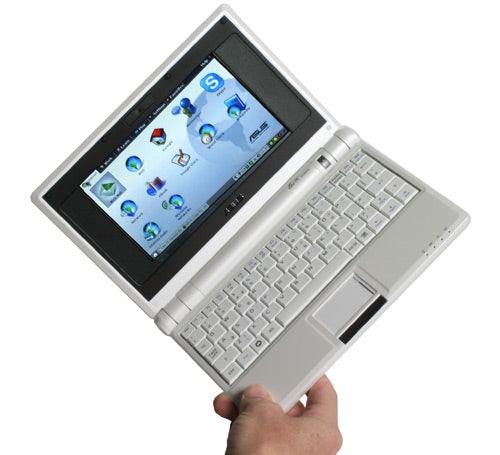 Moving to the Internet tab there’s plenty to see, including shortcuts to popular mail services such as Gmail and Hotmail, as well as links to Wikipedia, Google Documents and Internet Radio. Skype comes pre-loaded, along with the excellent multi-platform instant messenger, Pidgen. Internet browsing is supplied by Firefox, though of all things the browsing experience on the Eee PC isn’t as seamless as it could be.


Why? To begin with the screen resolution isn’t ideal. Since a great majority of websites default to 1024 pixels wide, the 800 pixel width means many websites can’t fit into the screen. There’s also little in the way of scaling of web pages as found in Mobile Safari on the iPhone, which makes browsing on the lower resolution screen awkward at times. These aren’t insurmountable problems, but it may make some people think twice and as a result one has to wonder whether Opera might have been a better option as the default browser 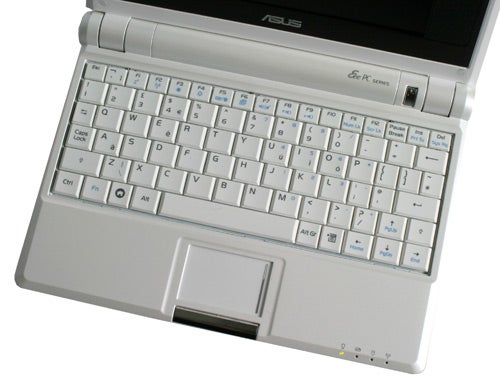 It’s known to be quicker and less resource intensive than Firefox, while it’s also better optimised for mobile devices with low resolution screens. Of course, the Linux proficient among you could happily install Opera yourselves, though the command line jiggery-pokery involved is hardly end user friendly.


In favour of Linux though, it does mean that the Eee PC boots up impressively quickly, in the region of 15 seconds. Moreover, the standby mode provides a near instant restart, just like other mobile devices. It also means that, despite the relatively slow components, the Eee PC doesn’t grind to a complete halt. It still isn’t fast mind you, but it’s perfectly useable for the usage required.

If you really can’t deal with Linux, Asus has made all the Windows XP component drivers available. Thus, you can install Windows XP if you like, or even wait for the Windows version that Asus has already announced. Whatever you decide to do, one can’t help but feel that given the price and functionality, the Eee PC could easily generate a great community that might churn out applications designed specifically for the device. In fact, EeeUser.com shows there’s already a grassroots community that could and should blossom.

Having touched upon the Internet and office functionality, one of the surprisingly good aspects of the Eee PC is its media ability, especially in regards to video. An open source media player is installed, which can play more or less anything you throw at it, including Xvid. For standard definition video, the screen is also quite capable. It’s not the most colourful or the sharpest by any means and has a slightly mottled look to it, but black levels are surprisingly good and it deals with motion well enough.


Returning to an earlier theme then, is the Eee PC the natural successor to likes of the Psion Series 5 and netBook? Yes, it is. It isn’t the same as them by any means, but it’s a modern take on a similar theme. Yes it’s small and has a great, small keyboard, but technology has moved on enough that you can now comfortably use it to surf the Internet, listen to music and watch video too. It also has a wider appeal, being great for introducing computing to children and for adults who want something simple and portable. 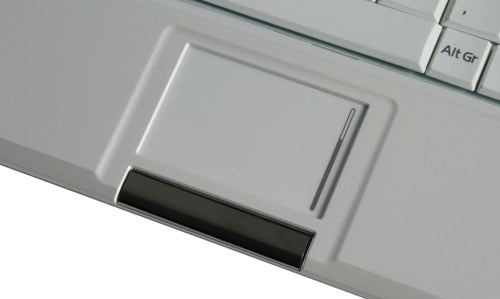 As such, one can only recommend the Eee PC. It does have its issues, but it’s difficult to deny both the value and sheer usefulness of the device as an auxiliary notebook or general portable companion. Moreover, Asus must be applauded for being gutsy enough to introduce such a device at the bargainacious price it has. Now, one can only hope it is encouraged by this response and goes away to improve on what it has done. Were it, for example, to make a version with a 9in screen with 1024 pixel width, then the Eee PC could become something even more special.

Refreshingly innovative and scandalously cheap, Asus’ Eee PC is a great little device for those with basic needs. A great keyboard makes working on it surprisingly easy, while media playback adds a little extra to the package. Internet browsing is also a key component and though the low resolution screen lets it down somewhat, at this price it would be churlish to penalise it too greatly.