Netbooks were once the dangerous upstarts of the laptop scene. Like Rik Mayall in the 80s. However, time has softened their impact. Now that netbooks are a consumer tech institution, devices like the Asus Eee 1018P risk making no impact whatsoever if they can’t stick out from the crowd. This Eee Pad’s USP is style.

With a 10.1in screen, 1GB RAM and 1.83GHz single-core Intel Atom N475 processor, the Asus Eee PC 1018P’s basic specs do not offer anything out of the norm. With an aluminium-coated keyboard surface and lightly-textured case though, its looks and build are a cut above. At just 18mm thick and 1.2kg, the aluminium finery has not added significantly to the netbook’s bulk.

The metal top to the palm rest and keyboard surround has completely removed any flex in this area – which is where you notice it most – giving the device an instantly high quality feel. The trackpad has a brushed metal finish while the keyboard zone is anodised. Both textures are fairly subtle though, so the difference doesn’t stick out too clearly.

Connectivity is mostly bang up-to-date, with two USB 3.0 ports and Bluetooth 3.0 on-board, alongside a VGA out, additional USB 2.0 socket, Ethernet port, mic/headphone jacks and the multi-format card reader. There’s one glaring omission though – HDMI. The VGA output lets you connect the Asus 1018p to an external monitor, but to watch the occasional HD video file on telly, we’d have liked to see an HDMI included. Granted, it’s not supported by the chipset but there are plenty of HDMI netbooks out there nowadays. 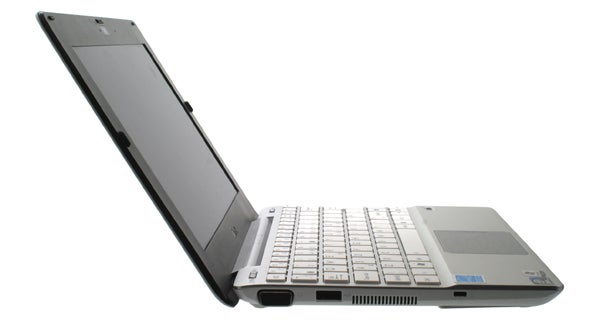 This void-like feeling is made worse by the inclusion of some superfluous features, such as the fingerprint reader on the front and the sliding lens cover for the woefully underpowered 0.2 megapixel webcam. We’d have traded both in for another video output.

We’re not quite as willing to give away all of the Asus 1018P’s window dressings though. A software tweak allows for USB charging even when the netbook’s off. It’s disabled by default as it eats into the battery, but could prove a lifesaver if you find your smartphone is out of juice on the way to meet someone.

The Asus Eee PC 1018P and 1015P both use a chiclet-style keyboard, offering keys that are more discretely spaced than the Eee PC 1001 and 1008 models. It’s similar in style to the popular Asus Eee Pad Transformer’s keyboard accessory, with the aluminium coating lending it a similar level of build quality. 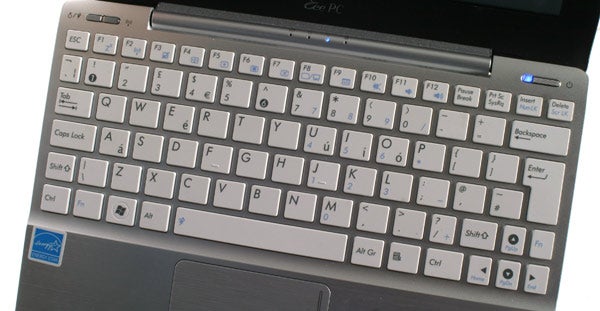 The action of the keys isn’t quite up to the best netbooks from Lenovo, for example, lacking a little definition, but at over 90 percent of full size, typing is not significantly slowed down compared to a desktop keyboard. Once the initial learning curve has been surmounted, that is. As is standard for a netbook, secondary functions are mapped to the F-keys, from switching Wi-Fi on and off to changing volume and disabling the trackpad.

Its trackpad is something heavily influenced by the Eee PC 1018P’s style pretentions. It features an attractive brushed-metal finish but the buttons aren’t separate – instead a mostly seamless part of the pad itself. The button area is textured with raised dots to tell your digits when they’re in the right place though. There’s no divide between the left and right buttons either. We found this compromise easy to live with and comfy to use, but if you’re terribly picky about your trackpads, this may prove a turn-off. 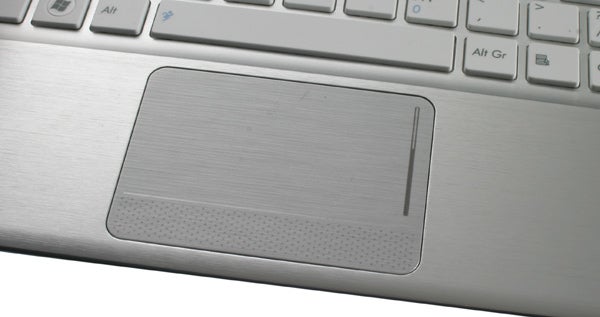 The speakers are built-into the Eee PC 1018P’s metal hinge, freeing the keyboard surface from having to be pitted with any speaker outlets. Sound is weak and reedy, not helped by the angle of the speaker in normal usage – it points upwards, not towards you. With volume maxed-out there’s no distortion, which is something, but for all but the occasional YouTube clip, you’ll want to plug in a pair of headphones or speakers.

The Asus Eee PC 1018p has a 10.1in screen, the bog-standard size for today’s tablets and netbooks. It’s an LED-backlit model using a 1024×600 pixel panel, which looks increasingly low-res now that tablets like the Motorola Xoom and convertible Asus Eee Pad Transformer have upped the tablet resolution bar to 1280×800. When the Eee PC 1018p’s RRP is around £349, this spec is starting to look decidedly old hat. 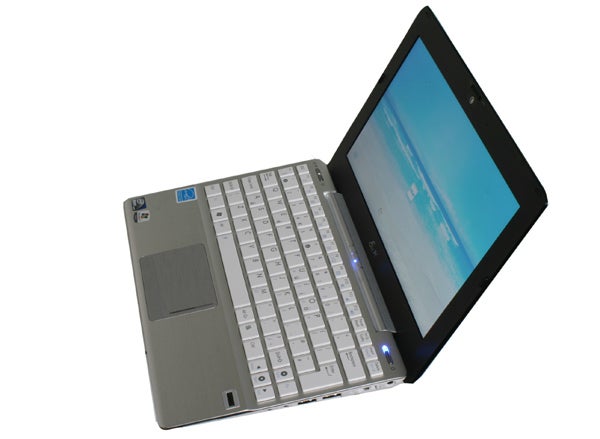 The display suffers from contrast shift when viewed from significant horizontal and vertical angles, but within normal limits performance is more than acceptable. There’s plenty of brightness on tap and little colour shift. It’s a solid, if unspectacular performance.

The Asus 1018P comes in two iterations – one with a dual-core N550 Atom and this one, which has the lower-powered single-core 1.83GHz N470 Atom equipped with basic integrated GMA 3100 graphics. It doesn’t have enough power to play 1080p video without major stuttering, but when there’s no HDMI output and only a sub-720p HD screen on-board, such a feature would be of limited use.

This is a netbook for the basics – word processing, web browsing and watching the odd video on-the-move. Even 720p video on YouTube struggles along here, although standalone files will play correctly – if encoded with a sensible codec and at a modest bit-rate. Gaming potential is similarly limited. In our standard Trackmania Nations benchmark, at medium settings, the Eee PAD 1018p managed just 9.5fps. Even with the settings set to rock-bottom levels, this figure only bumped up to 12fps. At this point, playing the game could be classed as a masochist’s hobby.

The 1GB of RAM common to virtually all 10.1in netbooks naturally limits productivity here – and we’re beginning to get a little tired of it. At least the single-core processor doesn’t significantly slow down basic navigation through the Windows 7 OS. Again, stick to the basics and the Asus Eee PC 1018p will give you no problems.

Doing these basics on the netbook is made all the more pleasant by its strong suit, though – its design and build. The aluminium layer may appear to be a superfluous add-on, but that premium veneer does make this device more enjoyable to use. And beyond your frames-per-second and your CPU clock cycles, this remains an important factor when it comes to actually using the thing.

The Asus Eee PC 1018p lasted for 5:08 hours in our video test, playing an SD Divx file on loop at 60 percent brightness. This is a fairly average result for a netbook, though some rivals are able to push 8-10 hours. Asus claims “up to 10 hours” for the netbook, which may be possible if you turn the brightness down, switch off Wi-Fi/Bluetooth and only undertake very low-intensity tasks. 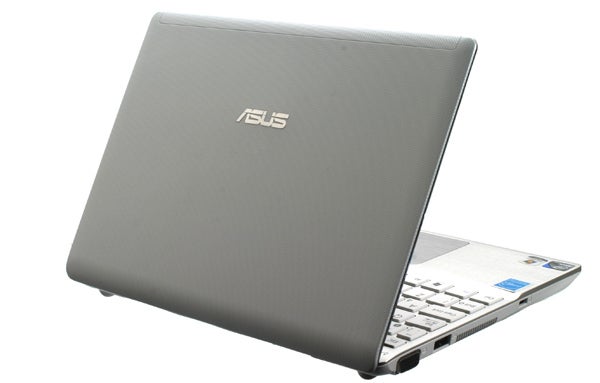 If performance and battery life are your key considerations, rather than style and build, other options are very difficult to ignore. The Acer Aspire D255 offers a better processor than this particular model, for less money, and the Toshiba N550 is also better-equipped, offering a more powerful AMD processor, HDMI output and half-decent speakers.

The Asus Eee PC 1018P is very good at being a netbook. It’s particularly slim, otherwise small, light and more pleasant to use than some cheaper alternatives thanks to its aluminium clad interior. However, you do pay for such luxuries and with a single-core Atom processor and no HDMI output, it can’t handle video nearly as well as some similarly-priced netbooks from other manufacturers.