It’s another Eee PC: hooray! As noted in the review of the MSI Wind last week, Asus’ response to the myriad of potential suitors to its netbook crown has been quite wide ranging. Today is the fourth Eee PC model we’ve reviewed and Asus lists no less than eleven different configurations on its website, split between six different models. With another Intel Celeron based version, the Eee PC 904, also due to appear soon, it’s a messy and confusing range to say the least. 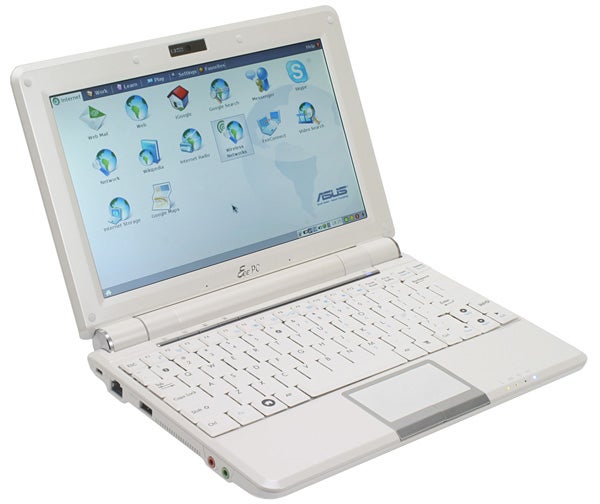 So, the Eee PC 1000 – what sets this apart from the rest? It is ostensibly Asus’ answer to the likes of the MSI Wind, featuring as it does a near identical 10in, 1,024 x 600, LED backlit screen, a larger and more comfortable keyboard and consequently a larger chassis as well. Measuring 266mm across the Eee PC 1000 is around four centimetres wider than the 901 and at 191.2mm deep, about two centimetres deeper as well. It also weighs more, at 1.33kg compared to the 1.1kg of the Eee PC 901. Indeed, as our shots show, it’s also slightly wider and deeper than the MSI Wind, though not devastatingly so.


Does this extra size matter? As ever it depends on how you use it…your netbook, that is. We still hold the form factor of the 901 in high regard and it’s definitely a degree or two more portable, but if you do want a better keyboard then the extra size and weight of the 1000 is a small and very bearable price to pay. Moreover, though many still lament the fact that you could get a larger and more powerful laptop for around the same price as one of these, the difference between a 1.3kg 10in machine and a 15.4in, or even 13.3in and 12.1in, laptop is quite substantial. 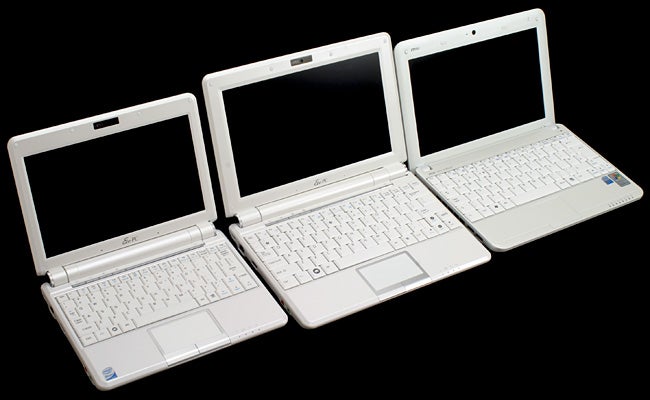 Apart from the size, visually the Eee PC 1000 is basically identical to the 901. It has the same glossy finish, same logos and the same basic arrangement of connections. It’s still an attractive unit all in all, but in this size bracket the MSI Wind probably has the edge in the aesthetics department. It simply looks and feels a little slimmer and sleeker, though its smaller touch pad is a minor negative.


Inside very little has changed. You still get a 1.6GHz Intel Atom CPU, 1GB of RAM, Wireless-N, 10/100 Fast Ethernet and Bluetooth, but you do get more storage. Our Linux sample comes equipped with 40GBs worth of solid state storage and the Windows version, the Eee PC 1000(H), comes with a 1.8in 80GB mechanical drive.

Sticking to what’s new, let’s take a closer look at the keyboard. Even in this larger size there are still a few compromises to be endured. For example, whereas on the Wind the right Shift and cursor keys sat slightly further left than is typical, Asus continues to simply place the Shift key the other side of the Up key. Neither solution is ideal; withdrawn cursor keys would be the best option, but we’re out of luck here. Asus’ solution does have one benefit, however, as the full stop and comma keys aren’t half-size, as they are on the Wind. Ultimately, each has their problems but they’re ones you’ll get used to in time. 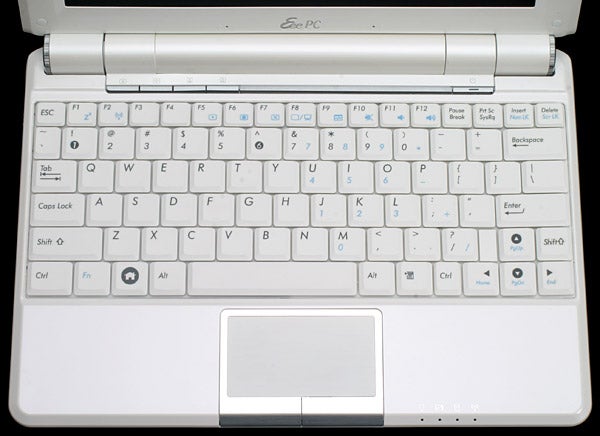 What’s more important is the general typing experience and if you want to use a netbook – presuming these even qualify – for more regular typing, the Eee PC 1000 should fit the bill nicely. Keys have a reasonable level of travel and response and are obviously larger and easier to type on. Unlike the Wind, the Eee PC has the left Ctrl key in the right place (i.e. outside the Fn key), but what it gives with one hand it takes with the other since the Return key isn’t the large UK style one as on the Wind, but a smaller US type one. Overall, in the keyboard department both the Wind and Eee PC 1000 have their advantages and disadvantages, so they both come out fairly even.


This evenness is continued in the screen. It seems likely that both the Wind and the Eee PC 1000 use the same screen, but even if they don’t there’s little to choose between them. Here the screen is brighter than the Wind’s and is also marginally brighter than the one used in the 901. Text is sharp and very readable even at small sizes and video looks fine. We’d add, too, that the larger size does (arguably) add a greater degree of viewing comfort, even if the actual resolution is exactly the same. 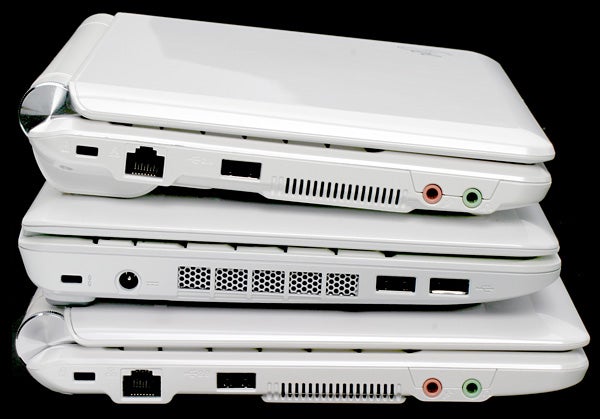 Audio was a particular strength of the 901 and this remains the case with the 1000. It still astounds exactly how good the speakers, which are hidden away beneath the front edge, really are. For such a small machine they reach indecent volumes and sound surprisingly rich; good enough that you’d happily listen to some music or watch a video without a set of headphones. In addition, if you opt for the Windows edition, you benefit from Dolby Sound Room and the virtual surround sound headphone technology it brings with it.


Other advantages include Draft-N WiFi and the custom Linux OS of the Eee PCs, which remains a simplistic joy to use. It creates a near non-existent barrier of entry for even novice users, coming with pretty much everything you need to start being productive immediately. Of course, when it comes to tinkering and customising it isn’t quite as strong and this is a consideration, particularly for the potential “power user”. 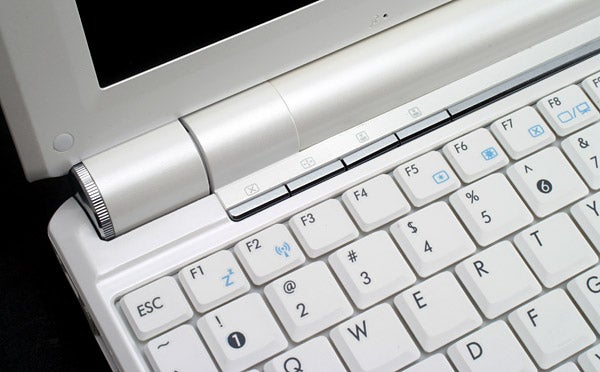 Speaking of “power users”, one thing they’ll continue to enjoy in the Eee PC 1000 is superb battery life. Asus has made the six-cell 6600mAh battery, first seen in the 901, standard across the range and though the screen is slightly larger, we still managed just over four and a half hours on a single charge with wireless enabled and brightness set to the maximum allowed. Were one to turn off all wireless radios you should be able to achieve results in excess of five hours and these figures currently blow all competition out of the water.

So, bearing in mind that the Eee PC 1000 is everything that’s good about the Eee PC 901 with nearly none of the drawbacks, is this the 10in netbook you should buy? In this instance it’s only a qualified yes. It is, after all, superior to the Wind thanks largely to its battery life, but it’s hard to escape the feeling that this isn’t the version of the Eee PC 1000 you should be buying. 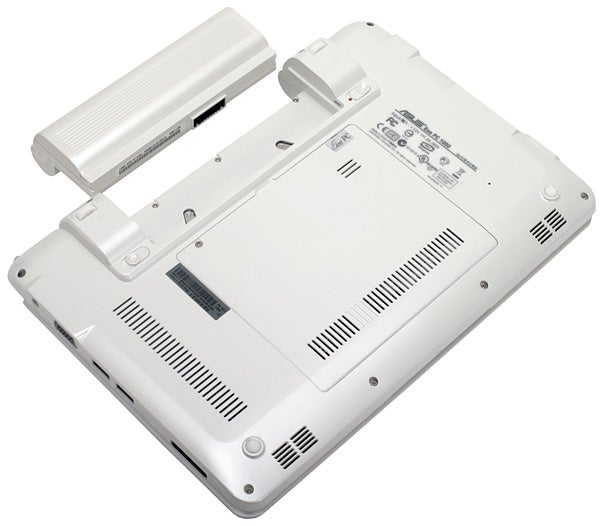 
Notwithstanding the extra durability of an SSD, the larger 80GB mechanical drive of the 1000(H) arguably suits the usage model of this larger form factor much better. If the 901 is perfect for casual computing, Internet browsing, listening to music and watching the occasional video, the 1000 and its larger keyboard and screen makes it ideal for more demanding users. Users that want to use it as their main computer outside the home and want to write large volumes of emails and documents as well as listen to music and watch videos. Such users are bound to gravitate toward the more capacious storage of the 1000(H) and are unlikely to pay more for an SDD, unless they’re very careless. 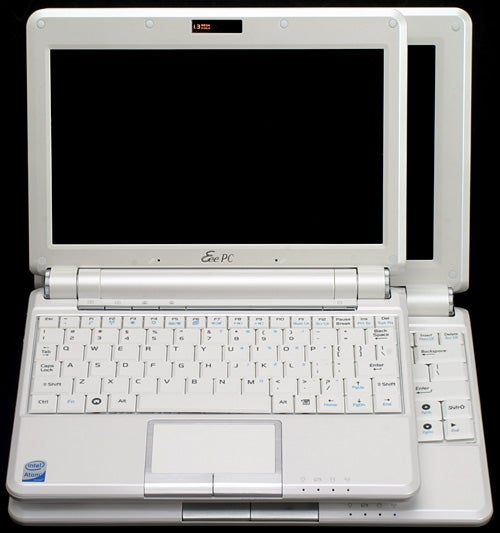 Ultimately, less is not more, especially when it costs more to have it. Indeed, this configuration is likely to be further undermined by the Eee PC 904. This, just to confuse matters further, will be an 8.9in model but in the 10in chassis with speakers surrounding the screen, as with the original Eee PC 701. It’ll run Windows, utilise an 80GB HDD but also like the original 701, use the 900MHz Intel Celeron CPU instead of the Atom. This is obviously a disadvantage but with an SRP of just £270 it’ll be a compelling option and unlike Atom based versions, whose availability is patchy at best, is likely to be more readily available. 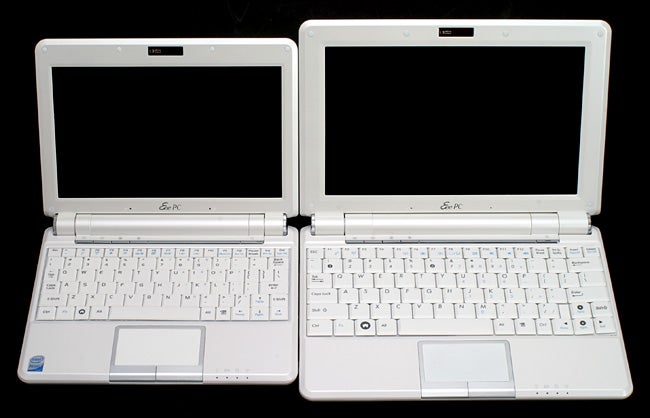 
Though excellent in almost every respect, the price is a little too dear given that the Windows XP version of the same machine will retail for £20 less and feature a larger hard drive. If you fancy the form factor over the 9in 901 and lust after SSD storage it will serve you exceedingly well, but at this price it’s not the one we’d recommend buying.