It’s not often we review a graphics card without testing it against the competition but today is one of those rare occasions. You see, while it may look rather different, the ASUS EAH3870X2 is actually identical in terms of performance to the ATI reference HD3870 X2 that we looked at a couple of weeks ago. In fact, being as our review sample from ATI died part way through testing, we actually used the ASUS card to complete our testing for that review.


So what we’re here to do today is assess the EAH3870X2 not for its underlying technology and performance but rather look at whether the new twists Asus has applied to the ATI reference design make for a better or worse card and assess whether the bundled accessories and games, along with the card’s overall price make for a compelling purchase. 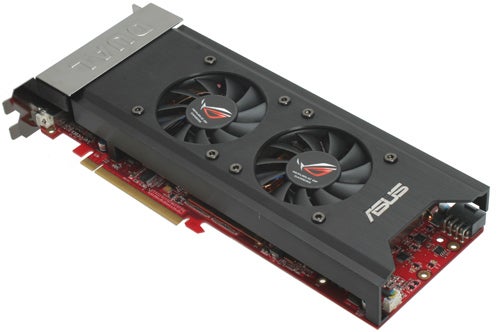 All that said, it would be a little harsh to send you all off to read through a 15 page article just to familiarise yourselves with a card’s architecture and features so I’ll spend the next few paragraphs just quickly going over what the EAH3870 X2 has at its heart.


The HD 3870 X2 is actually two HD 3870 chips mounted on a single board and working together in CrossFire. Unlike conventional CrossFire and SLI setups the signal between the two chips doesn’t actually pass through the PCI-E bus or the connectors on top of the card. Instead, it is all done on the card with the help of a PCI-E bridge chip, which nestles between the two HD 3870 chips.

(centre)”The PCB and chip layout for the Asus board is identical to the reference board shown above.”(/centre)

The merits of this arrangement are again something we discussed at length in the full review of the HD 3870 X2 so I won’t dwell on it here. However, it is important enough to at least bring to your attention.


You see the HD3870 X2 is an incredible technical achievement – fitting all that hardware on such a relatively compact board is worthy of aclaim on its own – however it isn’t a product we can out and out recommend because although one minute it may be the fastest thing around, the next it could be slower than a card costing a third of the price.


This all comes down to the fact games need to be written with dual-GPU configurations in mind to benefit from the extra processing power they provide. This and the card’s drivers often need to be optimised to work with the game as well. While this will generally happen eventually, and you will be able to have the gaming experience you paid for, it could take significant amounts of time. So, if you are thinking about investing in an HD3870 X2 you should bare in mind these potential problems.


In terms of features, the HD3870 X2 boasts ATI’s latest video decoding engine, the UVD, that enables you to watch HD movies on your PC without it taxing your CPU. It supports ATI’s PowerPlay technology for dynamically adjusting power usage, ensuring only as much power is drawn as is needed depending on how much work the card has to do. Also, when the drivers are ready you will be able to use a pair of these cards together for four-way CrossFire, or CrossFire X as AMD is calling it.


That’s a brief overview of what the HD 3870 X2 brings to the table but what really matters today is how this particular Asus card stacks up. So, join us on the next page where we’ll discuss the merits or possibly even lack thereof of the Asus EAH3870 X2.

The first thing you notice about the Asus board is its unique cooler. In almost every aspect it is different to the AMD reference design. So, rather than a single fan which sucks air in from the front of the card, across the heatsinks that cover the circuitry below, and out the back of the card, it uses two fans that blow directly onto the heatsinks and the air is left to just float around the inside of your case. Suffice to say, you’ll need a well ventilated case to disperse all this heat. 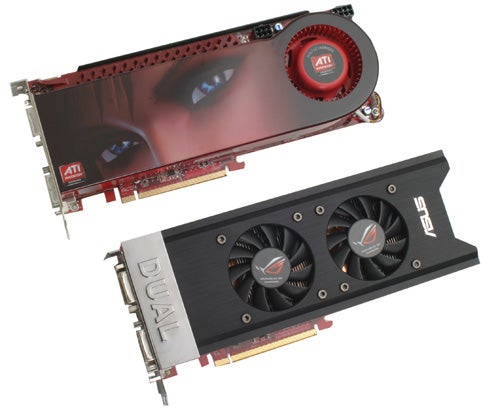 If we look a little closer you can see that the heatsinks themselves are quite different as well. Rather than using large blocks of metal like in the reference design, Asus has been a bit more sophisticated and incorporated four heatpipes to draw heat away from the chips’ surface and up to the radiator fins above. As well as this, the black metal plate that covered the back of the card has been removed (making you wonder if it was ever needed at all) and as a result the Asus card is much lighter than the reference design. Not that this has made it exactly lightweight, with it still coming in at 806g, but at least it’s a start.

We subjectively tested the effectiveness of the cooler while it was running our tests and we can report that it performed very well, keeping the card cooler than the reference design while keeping noise to a minimum. However, we wouldn’t recommend you buy the card on the merits of its cooler alone, because we still prefer the way the reference design gets rid of the hot air. No, the reason for getting this card would have to be its four, count ’em four, DVI connectors. 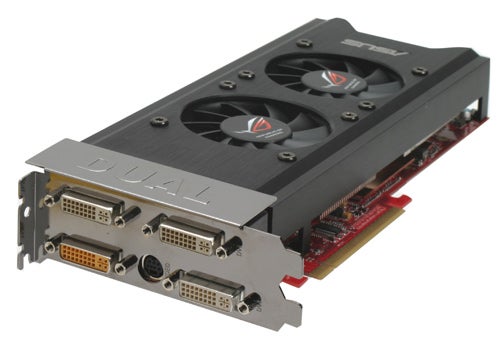 Yes, the big selling point of this card is that it can be used with up to four monitors simultaneously, which is something that’s generally been limited to dual card configurations. There’s been no compromises in features either as all four are dual-link so can be used with 30in monitors and they’re all HDCP compliant as well. So, no matter which monitor you choose to watch your HD movies on, you can be gauranteed it will work.

We also like the way the two auxiliary power connections on the top have been turned to face upwards, parallel with the edge of the card. The perpendicular positioning of the connections on the AMD desgined board was something we were not great fans of as it makes working with the card, when inside a case, far more difficult. So, Asus changing this gets a big thumbs-up from us. 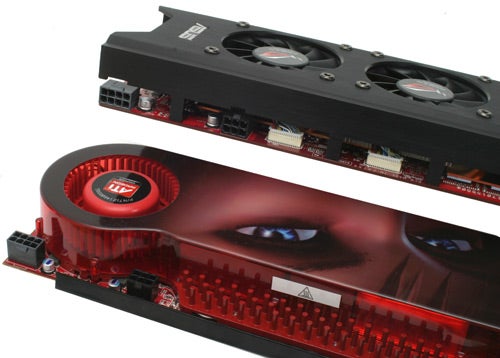 Asus continues to bundle the excellent Company Of Heroes: Opposing Fronts with its more expensive graphics cards and though it isn’t the most recent of games we actually think it’s a very good choice. Our logic being, it’s an expansion pack so it won’t be primary on many peoples’ radar. However, it’s still a superb stand-alone game so most who play it will enjoy it. You also get DVI-to-HDMI, DVI-to-VGA, and component video out dongles in the box so, although you won’t have enough for all four of your monitors, you’ll be able to connect the card up to any single monitor or TV. 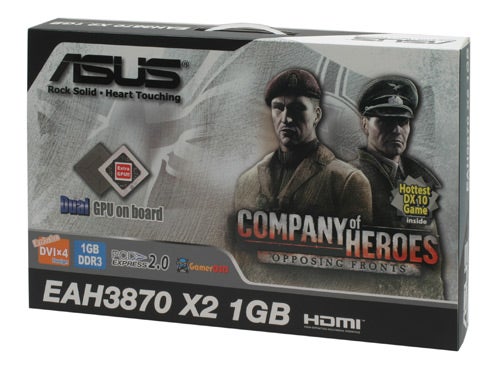 So the card has a good bundle, a dizzying number of video connections, and performance is as it should be but does the overall package impress? Well, that really depends on those connections. Apart from the small plus point of the two auxiliary power connections being positioned how we like them, the card has no standout plus points as compared with the basic rebadged card (which includes an identical bundle). So, if you don’t have a need for four DVI ports then we’d say don’t bother. If, however, you do require (or would just like) four connections then we can highly recommend this Asus card.


If you’re computer setup has three or four monitors then your choices have traditionally been limited to dual card configurations, but not any longer. With the Asus EAH2870 X2, you get four DVI ports on one card and enough performance to power them all. Combine this with a decent bundle of extras and you have a great package.