ATI/AMD recently announced the latest additions to its 3000-series of graphics cards, the HD 3450, HD 3470, and, HD 3650. These cards represent the meat and two veg of the company’s graphics card sales, providing small to medium boosts in graphical performance over integrated graphics while providing enough features to transform any PC into a fully up to date multimedia machine.


We’ll be looking at the HD 3400-series at some point in the future so anyone with a seriously tight budget, an interest in building a Media Center PC, or a desire simply for a very small increase in 3D graphical performance should keep an eye out for that. Today, though we’re looking at the faster HD 3650 and more specifically the version brought to us by ASUS, the EAH3650 TOP. Before we look in detail at that card, though, we’ll talk a bit about what the HD 3650 brings to the table. 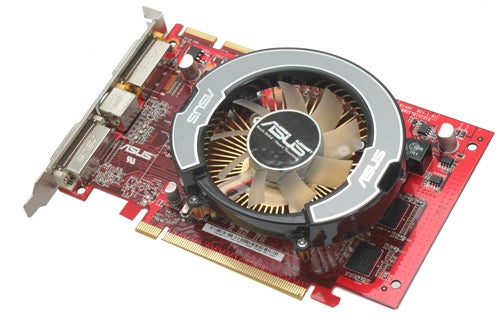 As Hugo reported on the launch day of both cards, the 3650 is a direct replacement for the 2600-series and as such it retains many of the same features. So, you still get 120 stream processors (arranged as 24 five-way superscalar shader units), a 128-bit memory interface, and either 256MB, 512MB, or 1024MB of RAM. You also get all the video processing capabilities of the old card and the ability to strap a couple of these cards together in a CrossFire configuration to increase your gaming performance. However, there is also a number of differences that make the name change more than just a rebranding.

First of all the new card uses AMD’s new 55nm manufacturing process, which means more chips can be produced from the same size wafer of silicon and, more importantly for you, the cards should be a little cheaper on the high street (at least relative to when the 2600 first launched). Also, the new process means the chip leaks less energy so power consumption is reduced along with heat output, which means your card runs cooler and results in less of a hit on your electricity bill. Speaking of which, the new PowerPlay power saving features (that dynamically turn off parts of the card that aren’t needed) first seen on the HD 3870 have been added to the HD 3650, so it’s even more energy efficient. 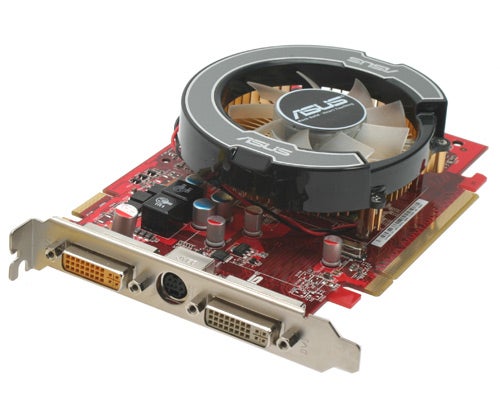 Other new features include ATI’s updated video processor, the Universal Video Decoder or UVD. This builds upon the video capabilities of the old 2600 series adding support for higher resolution 1440p HD video playback and even more capability to offset video decoding. There’s also support for DisplayPort, the new display connection that looks set to replace DVI in the not too distant future. It may not be an essential feature yet but for those more forward thinking among us the addition will be a welcome one.


There are a couple of tickbox features that have been added to the 3650 as well. PCI-Express 2.0 and DirectX 10.1 support are both present but considering the former is backwards compatible with old PCI-Express and the latter is highly unlikely ever to be a prerequisite in game development, you can largely ignore these.

Asus produces two different versions of the HD3650, the standard clocked EAH3650 and the overclocked EAH3650 TOP, the latter of which we’re looking at today. The core runs at 800 MHZ, which is 75MHz (or ten per cent) faster than the standard clocked card, so we should expect performance to improve by about the same margin. Apart from this, though, the two cards are identical. 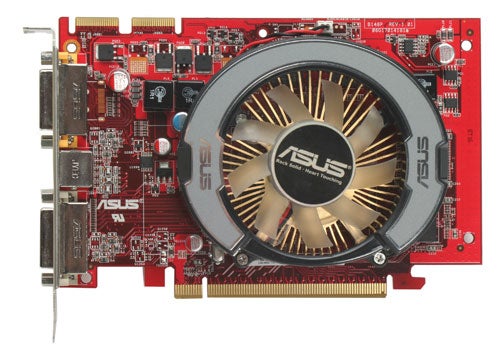 Apart from the cooler, the card is very similar to the AMD reference design and it takes a keen eye to spot the differences. It’s a full height card so it won’t fit in slim-line Media Center cases but at only 17cm long it is plenty short enough to fit in all normal chassis. Along the top there are a couple of CrossFire fingers for use in CrossFire and CrossFire X configurations – although we did notice that no CrossFire connectors are included in the box so you’d have to source them elsewhere if you want some multi card action.

The cooler is a bit of a strange one because although it performs quite well, it is by no means silent when under load yet it is still so large that it takes up two expansion card slots. When the likes of the nVidia 8800 GT (a much more powerful card) can get by with a single slot cooler, this seems unnecessary, especially as the cooler doesn’t even take advantage of the extra expansion slot to exhaust the hot air out your case.


In the box you get all the bits and bobs you need to get going. There’s a DVI-to-HDMI converter that enables you to take advantage of the HD3650’s ability to pass audio out through your graphics card down an HDMI cable. You also get DVI-to-VGA and component video-out dongles for use with analogue HD displays. You don’t get any free games or extra software but considering the price of the card this is perfectly understandable. 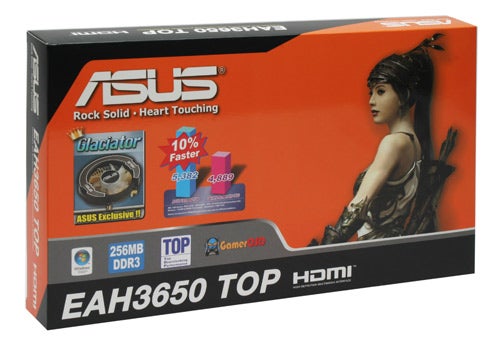 We tested the card using our usual range of games, all of which use custom timedemos. We test at a variety of resolutions and also vary anti-aliasing and anisotropic filtering at each resolution. Each setting is then run three times and the average taken to ensure a fair and accurate result. We normally apply alpha blending for smoothing out edges in semi-transparent textures, however these cards aren’t really able to cope with this turned on so we’ve left it off for this comparison.


We’ve also upgraded our test bed from our slightly aging Intel D975XBX2 “Bad Axe 2” to a rather more up to date Asus P5E3Deluxe, which is based on Intel’s X38 chipset. This has required us to also move from DDR2 to DDR3 so a pair of KHX11000D3LLK2/2G 1GB DIMMs from Kingston are currently our RAM of choice. Everything else, though, remains the same so we still use an Intel QX6700 for our CPU and Windows Vista 32-bit is our OS. In the not too distant future we will be moving to 64-bit Vista and at least 4GB of RAM but for now we consider the above a representative system to test with.

As was to be expected the EAH3650 Top and HD 2600 XT performed nearly identically with only really the higher memory speed of the former putting it ahead. Likewise the EAH3650 TOP and 8600 GT traded places at the top and to all intents and purposes it can be called a dead heat. So, if there’s little to choose in terms of performance the choice comes down to price and features and this is where the EAH3650 TOP really pulls away. The AMD based card is cheaper than the 8600 GT, it has better video processing capabilities, and it consumes less power.


The Asus EAH3650 TOP is a superb starting block for anyone looking to upgrade their struggling home PC. It should give you a nice boost in gaming performance, it’ll enable you to play HD video regardless of how slow you CPU is, it will hardly impact on your electricity bill, and best of all you can get it for a mere £50!