What is the Asus DSL-AC68U?

This is the router many people have been waiting for. The DSL-AC68U is essentially the RT-AC68U but with an integrated VDSL2 fibre optic modem. Unlike the majority of routers, this means the DSL-AC68U is a single box replacement for your ISP-supplied router and one that comes with a barnstorming AC1900 wireless spec. Is this the ultimate all-in-one upgrade?

It is also very well built. Like all routers, the DSL-AC68U uses a plastic chassis but it is extremely solid and you’ll find no ill-fitting edges or creaks and squeaks. Routers are never the most attractive of devices, but if you don’t mind the DSL-AC68U’s conspicuous styling it does add something to most rooms. 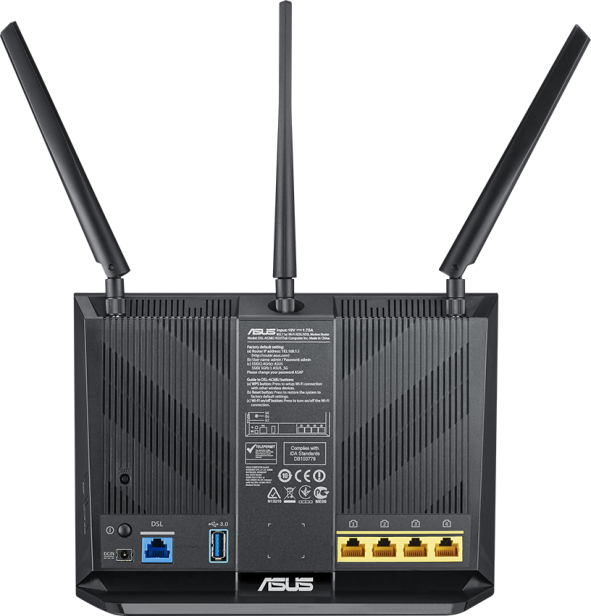 But it is the DSL-AC68U’s functionality that is the real talking point and Asus has pulled out all the stops. The real talking point is the inclusion of a proper VDSL2 modem (like the AC1750-based Fritz!Box 7490) which supports speeds well in excess of 100Mbps. It isn’t compatible with Virgin Media’s cable modems, but anything coming in through your phone line will play nicely.

While we don’t get enough VDSL2 third party modems, it is rarer still to see them combined with AC1900 WiFi. Here the DSL-AC68U takes its chipset straight from the RT-AC68U with Broadcom’s ‘TurboQAM’ technology boosting legacy 802.11n 2.4GHz speeds up to a theoretical 600Mbps. In conjunction with 802.11ac’s 1300Mbit theoretical limit you get the ‘AC1900’ moniker.

Do note you will need a TurboQAM compatible wireless receiver to harness these supercharged 2.4GHz speeds (such as Asus’ own PCE-AC68) but we’ve found AC1900 routers to excel across all spectrums and offer a major step up from their more common AC1750 brethren.

In addition to this pairing Asus also ticks all the usual boxes: Gigabit WAN, 4x Gigabit LAN, WPS and WPA/WPA2 security as well as IPv6 compatibility. It can also operate in bridge mode as a wireless extender which gives the router a second life when it eventually gets old and you upgrade to something else.

One strange shortcut is the inclusion of just a single USB port. It is USB 3.0, but most routers (including the RT-AC68U) have two. The logical conclusion is it had to make way for the VDSL2 port, but it is a shame Asus hasn’t been able to find the space to cram a second USB port in somewhere. 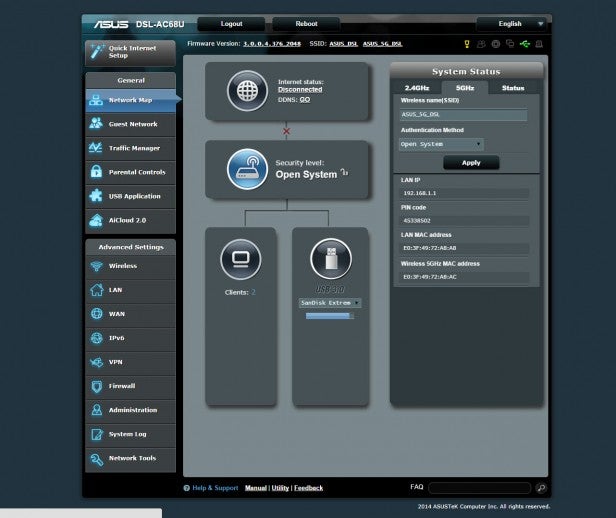 Asus has long been one of the front runners in intuitive router setups and with the DSL-AC68U that remains the case. Nothing has changed in the process since the RT-AC68U was released back in December 2013, but little needed to.

You simply connect the router to both power and a phone line (preferably the master socket as it gives the cleanest signal) and boot it up. No wireless password is set by default and when you first connect to the router it automatically opens a browser window and begins the setup wizard. This configures both the modem and WiFi (SSID, password, etc).

Some broadband connections will require you to input some settings so be sure to search for what you need beforehand or speak to your ISP directly.

As ever the one gripe we have with the Asus setup is the ageing UI. It is far from the worst around, but it could do with losing some of its gothic influence. It does seem as if Asus has actually been subtly lightening it here and there, but it could still look much fresher given the examples set by both D-Link and Linksys.