What is the Asus Chromebox 3?

Chromeboxes are basically simplified desktop computers, running Google’s Chrome OS instead of the likes of Windows or macOS.

Their main function is to get you online, with full support for the usual array of peripherals and the ability to download and run Android apps. Of course, functionality is limited, just as with the Chromebook laptop equivalents.

Asus introduced the first Chromebox a few years back, and this sequel basically offers a handful of upgrades to keep it all fresh and modern. At its heart this remains a simple and portable desktop box, however.

I’ve been using the Chromebox as my work device and here’s what you can expect. 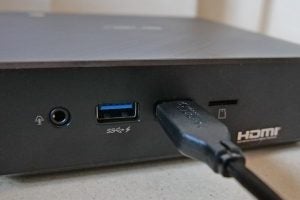 One of the primary benefits of the Chromebox 3 are its dinky dimensions. This tiny black box is roughly the same size as a stack of four or five CDs – for any younger readers who genuinely don’t know what a CD is, go ask your dad.

When I first picked up the box, I expected it to weigh as much as a brick, but I was pleasantly surprised. The Chromebox barely hits the 1kg mark, so you won’t notice its presence in your backpack if you take it on the road. That makes this one of the most portable desktop solutions around, beyond the makeshift smartphone efforts from the likes of Huawei and Samsung.

The box isn’t bad-looking, either. Up top you have a brushed metal design – which would probably look more premium if it wasn’t for the bright and colourful Chrome logo in the top-left corner. Meanwhile, the power button is neatly integrated into a cut-off corner, complete with a narrow LED strip so you know when the device is on.

If you do plan on carrying the Chromebox 3 around, you’ll appreciate its rugged finish. Asus performs its own shock, temperature and vibration tests to ensure that the device can put up with all kinds of punishment. And while I didn’t go so far as shoving it in the freezer or kicking it across the room, I can testify that this box can handle plenty of knocks and shakes. 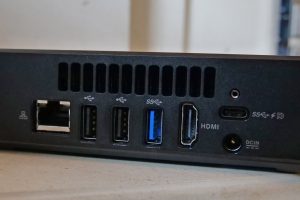 Despite its size the Chromebox 3 packs in plenty of ports, split between the front- and back-ends.

Upfront you have dual USB 3.1 connections, handy for hooking up a keyboard and mouse. Alternatively, that quick access is ideal for sticking in your favourite peripherals whenever required. I was also pleased to see a 3.5mm port for connecting headphones, if you don’t want to rely on Bluetooth.

Flip to the back and you’ll find one more USB 3.1 and a pair of USB 2.0 connections (note that on the Intel Core models, those 2.0 ports are upgraded to 3.1). There’s also a single Type-C USB 3.1 port, offering DisplayPort support. Alternatively, you can hook up a screen using the full-sized HDMI port. Asus has even found room for an Ethernet port and DCIN.

There’s only 20GB of storage for downloading apps and other bits –but, thankfully, Asus has you covered. On the front of the device is a 3-in-1 card reader, which accepts microSD, micro-SDXC and micro-SDHC cards. You can expand that storage by up to 256GB using a single card, which should cater for even the most app-happy of users.

If you wish to keep the box tidied away, out of sight – good news. Asus has bundled a mounting plate and screws, so you can slot the Chromebox in behind your monitor. Of course, all of the ports remain clear and available, so you’re not losing out at all. 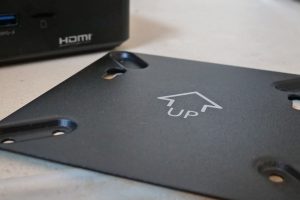 Setting up the Chromebox 3 is easy, comprising fewer steps than your average smartphone. Simply login to your Wi-Fi and Google accounts, and accept the usual terms and conditions. With that done, you’re thrust onto the Chrome OS desktops and basically told to get on with it.

Hooking up a mouse and keyboard is merely a case of plug and play. My peripherals were recognised and brought to life the instant they were plugged in.

As ever, Chrome OS enjoys a simple layout. Available apps are hidden away in a drawer, accessed with a click of the icon in the bottom-left corner. You can also stash shortcuts to your favourite apps and websites in the bar at the bottom of the screen. And over in the bottom-right corner, you can quickly access notifications and system settings. 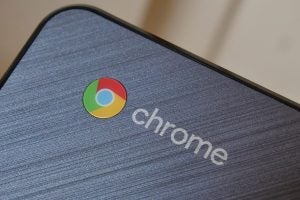 Basically, it’s as if Android and Windows had an illicit affair and nine months later, out popped Chrome OS. Anyone who’s used either system will be right at home. Even if you haven’t, chances are you’ll pick up Chrome OS’s nuances in next to no time. It really is that simple.

One of the main problems with Chrome OS is that it uses the same Google Play Store as Android smartphones. In other words, these apps are generally optimised to run on a mobile device, often while held in portrait mode.

As a result, many of the apps will only run in a compact vertical window, rather than filling the screen as you’d hope. Even worse, some will refuse to run at all.

Take Spotify, for instance. A pretty popular app, yet I simply couldn’t get past the login screen on Chrome OS; it refused to display properly. Thankfully, in this instance, I could run the browser version instead, but it’s a far from seamless setup.

Still, to be a bit more positive, at least multi-tasking is a piece of cake. You can arrange those windows however you like, placing them side-by-side to jump around in an instant. You can also dock windows to one side and flip between them with keyboard shortcuts, just as if you were in Windows.

We discovered some games that were perfectly playable on a TV with a mouse (basically simple puzzle and adventure games that can be controlled with taps – or in this case, mouse clicks). However, again, many titles are designed to be played on a smartphone, with a mixture of touch, gesture and occasionally tilt controls.

Although the Chromebox 3 comes with the option of Intel Core chipsets, my review model had the basic Celeron platform providing power. For the most part this was a perfectly fine setup, despite the Celeron’s limitations. Android apps run without much of a grumble, although I did notice some pauses as they loaded or when clicking through the menus.

You can also upgrade to an Intel Core model, with the i3-i7000U, i5-8250U and i7-8550U all on offer. Likewise, there’s a choice between 4 to 16GB of RAM. Frankly, though, I have no idea why anyone would need a Chromebox 3 with a Core i7 chipset and 16GB of memory, considering the limitations of Chrome OS. Answers on a postcard. 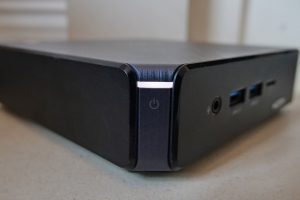 My Celeron model had no issues with heat or noise, as expected. The box itself remained cool during use, even if I kept it turned on for hours. In addition, the device produced next to no noise.

The Chromebox 3 can output 4K visuals, so owners of Ultra HD monitors are in for a treat. Most Android apps max out at HD right now, but you can at least stream 4K video from the likes of YouTube to make the most of that output.

Note that there isn’t a built-in battery, so you’ll need to keep the box plugged in at all times when in operation.

Why buy the Asus Chromebox 3?

If you’re after a seriously simplified desktop experience, with an emphasis on working or playing online, then the Chromebox 3 certainly delivers. The strong connectivity matches most mini-PCs and you can enjoy up to 4K visuals, so it’s certainly up to everyday entertainment.

Plus, you can carry this device wherever you need it – with zero effort – while the rugged finish gives added peace of mind. 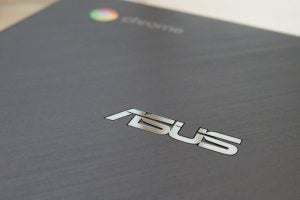 That said, I can’t help but feel that Chrome OS is better suited to laptop devices. The stripped-down online experience works well in a portable form, on a smaller screen; once you’re rooted to a desk, those limitations are all the more apparent.

If you’re simply after something to stream video or browse the web, a Roku or Fire TV Stick is a much more affordable solution.