The Asus Chromebook Flip C436 is a top-quality Chromebook, and an obvious alternative to the Google Pixelbook Go. However, while you can pick up a Pixelbook Go for £629, the Flip C436’s prices start at £999 in the UK.

A light magnesium shell, a rich-looking screen, a decent keyboard and a relatively powerful 10th-Gen Intel Core series processor are features you might expect to see in a Windows laptop around the same price.

However, justifying a £1000 spend on a Chromebook is difficult when there’s little potential for that excess power, and many of the most popular Google Play apps (now accessible on Chromebooks) don’t work as well – or at all.

Happy to pay big for the basics in a pretty package? The Asus Chromebook Flip C436 does the job well. But the half-the-price Chromebook C434 is easier to recommend. 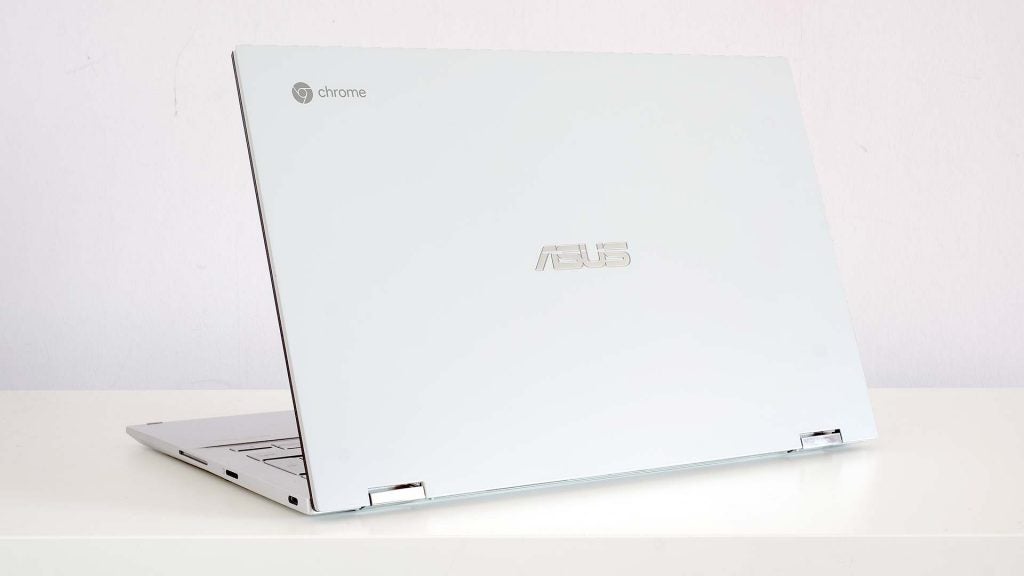 The Asus Chromebook Flip C436 is a good-looking Chromebook, with two features that will immediately catch the eye. Its lid is coated with a tough white paint, and there’s a speaker grille-like bar of metal by the hinge.

Magnesium works well in laptops because it’s both strong and light, and a step up on “low class” plastic. However, such alloy doesn’t have the same “feel” as aluminium. The magnesium panels here have a lightly textured finish and are, for the most part, sturdy. 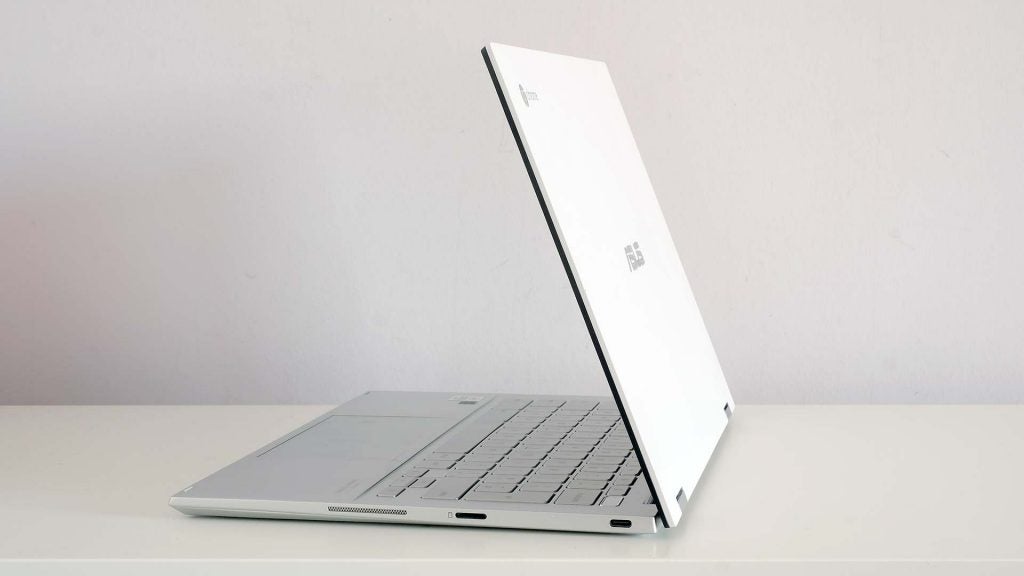 Note that the keyboard plate does depress a little under pressure; I’m less than pleased about this considering this is the most expensive Chromebook I’ve reviewed. But otherwise, the Asus Chromebook Flip C436 is a charmer.

If you’re not a fan of the white lid then you’ll be pleased to learn that the Flip C436 is also available in a Transparent Silver version, which I imagine uses a colourless enamel instead.

The C436 weighs 1.17kg with a depth of 13.7mm at its thickest point. You can buy Windows laptops (such as Acer’s Swift 5) that weigh less, but the Asus Chromebook Flip C436 still makes a delightful portable laptop – I’d just recommend using a case to avoid any damage to the lid’s paintwork. 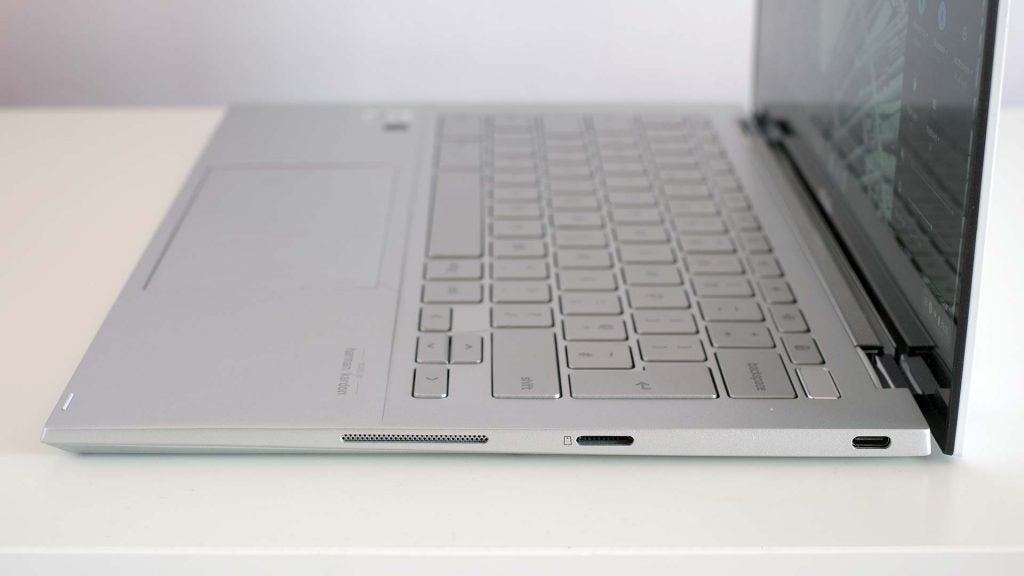 The Asus Chromebook Flip C436’s connections are more like those you’d find on a £1000 laptop; there’s the power socket, two USB-C ports to cover your peripherals, but no Thunderbolt 3 support or full-size USB.

As such, using the Asus Chromebook Flip C436 as a home PC will require some planning. You get a USB-C to HDMI adapter in the box, but this leaves no extra slots for a mouse and keyboard. It’s time to check out those USB hubs on Amazon.

The Asus Chromebook Flip C436 does come with a microSD slot and a headphone jack. Its speakers are fairly good too. There are driver outlets to each side, but since blocking them doesn’t impact the sound, the casing itself appears to be used as a speaker enclosure of sorts.

This leads to an above average sound field, expanding it beyond the laptop’s sides without leaving a hollow area at the centre. However, the Asus Chromebook Flip C436 does start to rumble when you play movies or bassy music at high volumes. 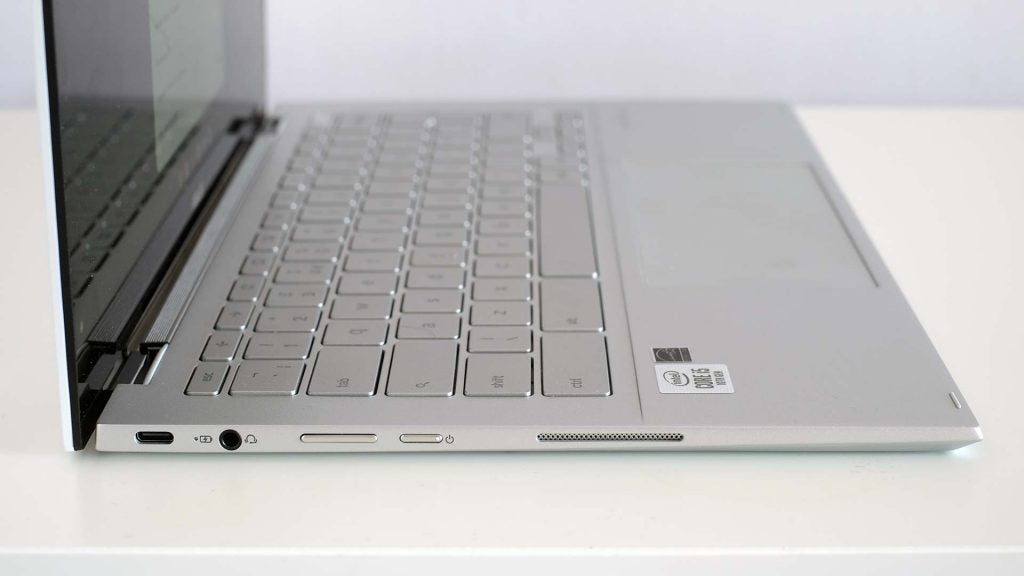 The Asus Chromebook Flip C436 has a keyboard and touchpad typical of a higher-price portable laptop. Its pad is textured glass rather than plastic, and the keyboard has a 5-level backlight.

I’m more a fan of the keyboard than the pad. Its 1.2mm key travel is on the shallower side and the feel is relatively light. It isn’t a typist’s keyboard, but there’s enough definition to the depress to make it satisfying for tapping out thousands of words at a time. 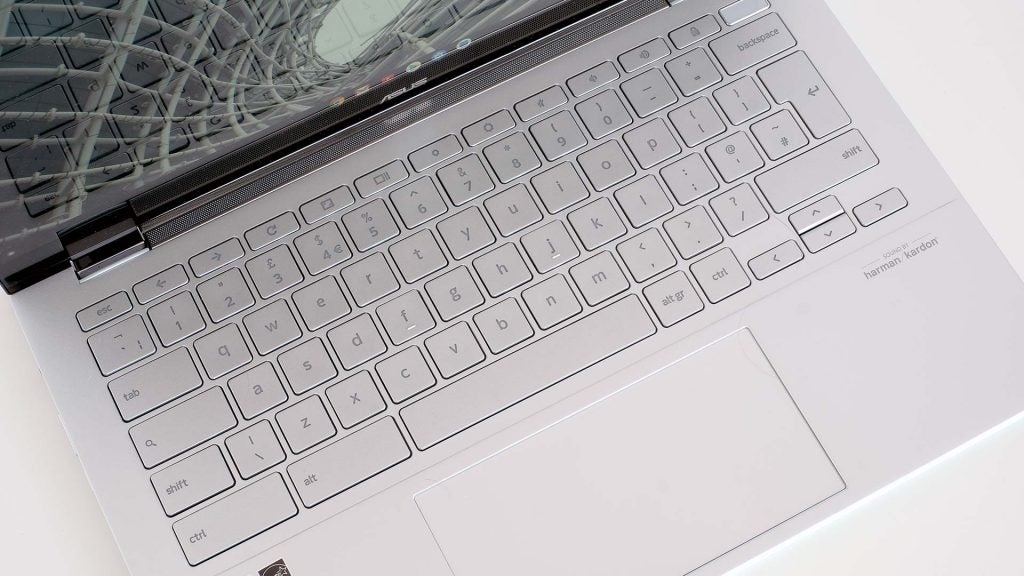 The backlight could be better for a laptop costing £1000, though. I’m not asking for RGB customisation of the type you’d see in a gaming laptop; but some keys appear much dimmer than others. The LED array looks like one you’d find in a cheaper laptop. Still, it works perfectly well.

The touchpad has a stiffer feel than the keyboard, with a fairly high tension clicker that creates a little more noise than light typing.

The Flip C436’s pad is a quality unit; there’s no wobble to the click mechanism, its size is generous, and the textured glass surface feels great. However, it’s a touch too sensitive. I found that Chrome OS would register taps even when I was simply trying to scroll. And, unlike Windows 10, the OS doesn’t let you disable tap-based clicks – so you’ll need to learn to moderate your touchpad use a bit. 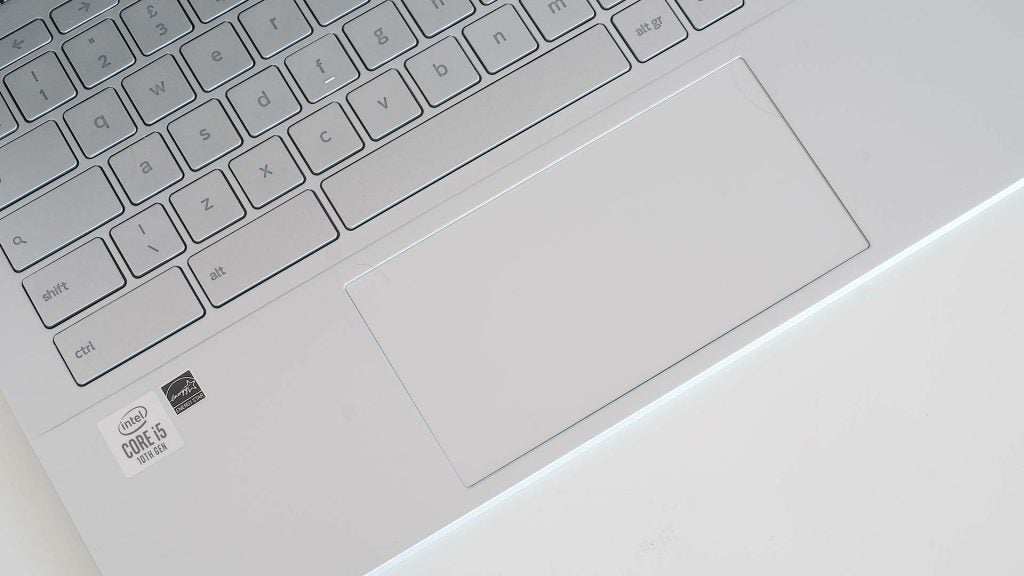 The Flip C436 also features a fingerprint scanner pad, to the top-right of the keyboard. It performs better than the average Windows laptop scanner, with fewer mis-read scans.

The pad doesn’t double as a power button, though. There’s a separate one on the side, next to a volume rocker. 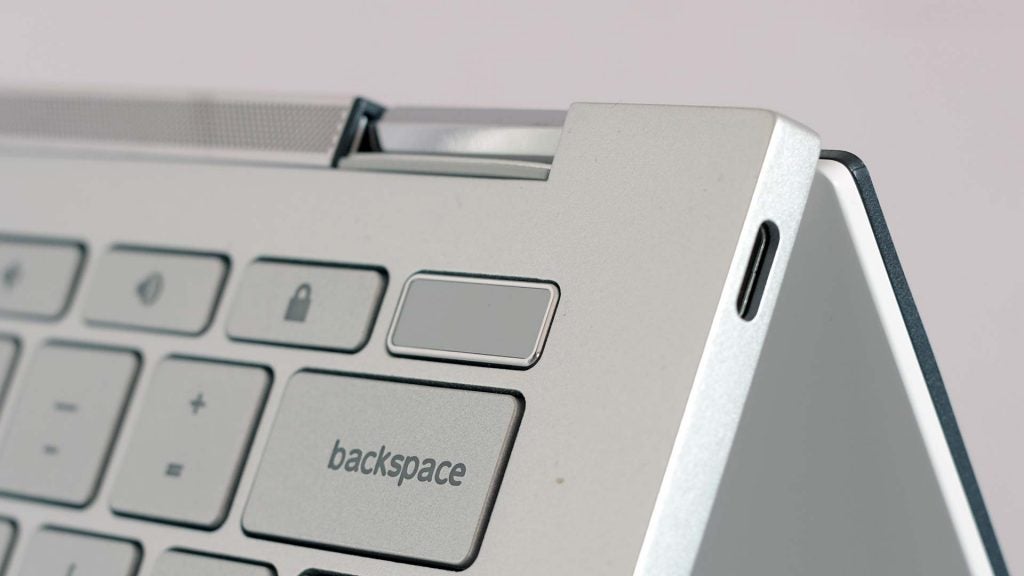 The Asus Chromebook Flip C436 has a Full HD 14-inch LCD screen. It’s slightly larger than the panel on the Google Pixelbook Go, but has the same number of pixels.

Since this is a Chrome laptop, I don’t have access to all the testing tools I use to review Windows laptops. Instead, I used the same image across models to compare displays. 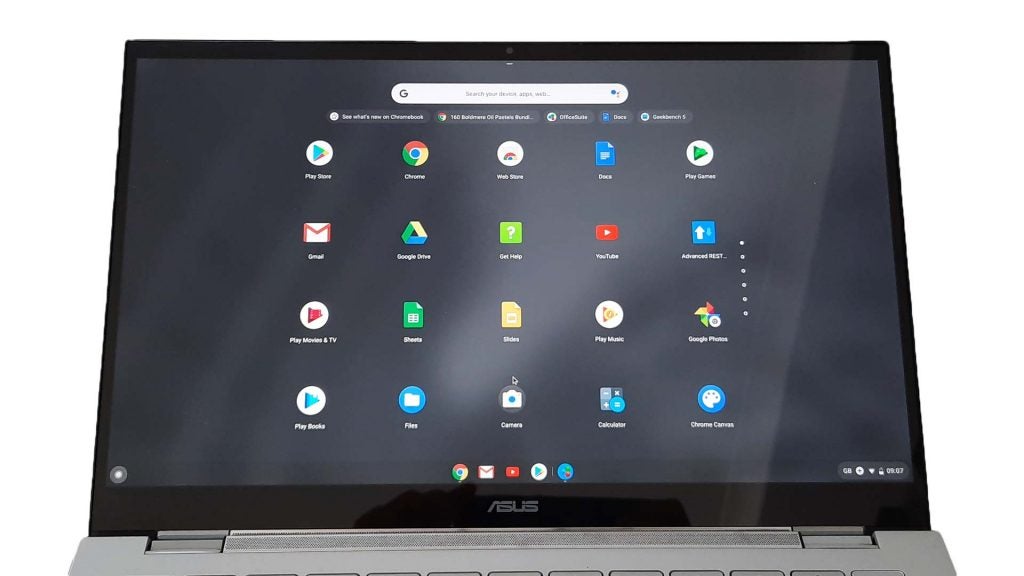 Display brightness is less remarkable. I tried using the Asus Chromebook Flip C436 outdoors on a sunny day, and it was only just usable. Peak brightness is lower than that of the Google Pixelbook Go display or the OLED Samsung Galaxy Chromebook, available in the US.

A glossy screen means that reflections, too, are more likely to be an issue. You may be able to use the Asus Chromebook Flip C436 outdoors to tap put a few documents, but watching movies may be a step too far.

The Asus Chromebook Flip C436 has a touchscreen, and the hinge lets you fold the display back to a full 360 degrees. It doesn’t make the laptop as useful a hybrid as one with a removable display, but the hinge is handy for watching video on train tables, in bed or whilst cooking. 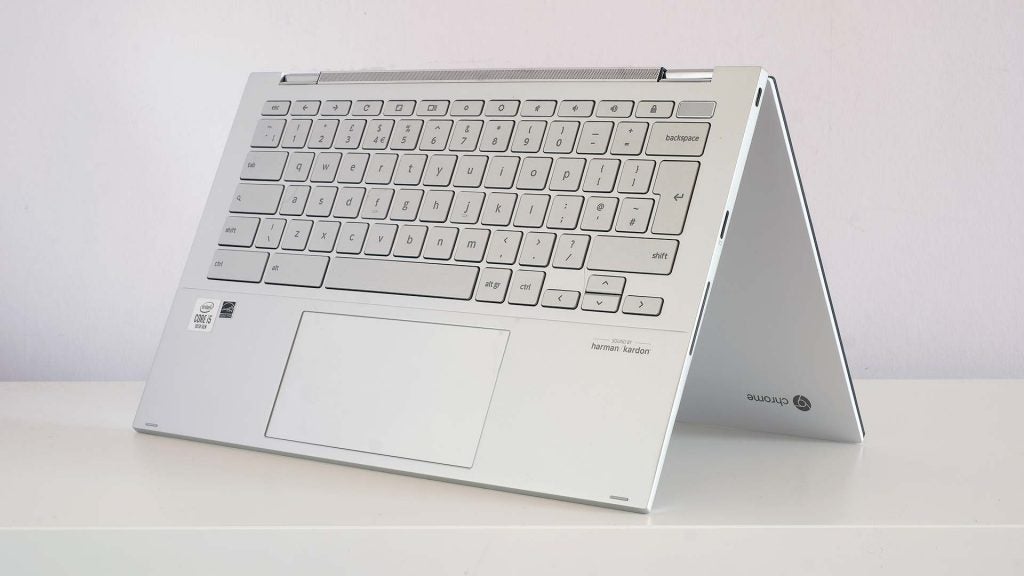 Asus Chromebook Flip C436 performance – Good for the basics, but we expect better for the price

So is it worth buying an expensive Chromebook? This is the question we need to ask of the Asus Chromebook Flip C436.

The 8GB of RAM and 256GB SSD storage are also better than what you’d normally find in a Chromebook.

Geekbench 4 and 5 scores suggest the wrapper used to run Android apps on Chrome OS isn’t devastating to performance. I recorded 2856 points in Geekbench 5 and 12,566 in Geekbench 4. These figures are around 10% lower than those you’d see in Windows laptops with the same CPU.

The Asus Chromebook Flip C436’s powerful processor means you can run Android apps better. These laptops have had access to the Google Play Android app store since 2016. While compatibility is much better than it was back when I first tested Android apps on Chromebooks back in 2016, issues are glaring in the context of a £1000 one.

For example, there’s no support for Vulkan. This is a graphics API used to improve graphics in some games, and is necessary to play titles such as ARK: Survival Evolved. Minecraft isn’t available on the Chromebook instance of Google Play, while Call of Duty: Mobile crashes before you even reach a match. PUBG suffers a host of graphics rendering issues, and the Fortnite installer page doesn’t recognise the Asus Chromebook Flip C436 as a compatible device. 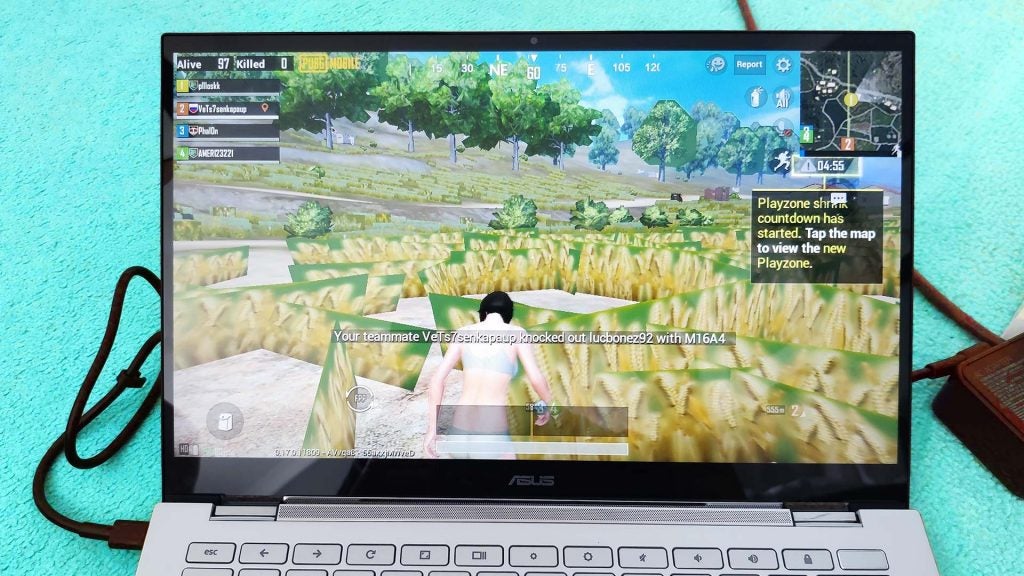 I tried 30 popular apps and games on this Chromebook. Many worked perfectly well, but eight either didn’t run at all or had issues serious that spoiled the experience.

Minecraft absence aside – which seems an important issue at any price for a family friendly computer – such issues wouldn’t be a huge concern in a £200 Chromebook. But in a laptop costing £1000, it’s a problem. Particularly since Chromebooks are often seen has offering the no-nonsense ease of a game console, alongside a general purpose laptop.

There’s also little in Chrome OS itself to show off the extra power of the Asus Chromebook Flip C436. Its apps menu still appears clunky next to that of Android, and the barebones Settings area feels more like that of a Linux distro than the polished experience Chrome OS should by now be offering. Chromebooks have changed significantly over the past four years, but the software behind them hasn’t moved on equivalently.

The obvious caveat: all these criticisms apply in the context of the Flip C436 being a £1000 Chromebook. I still have no issue recommending sub-£500 Chromebooks, and actively recommend cheaper ones all the time.

The Asus Chromebook Flip C436 has a 42Wh battery, which is a slightly lower capacity unit than the 48Wh battery found in the C434 and C433, two lower-cost alternatives.

Asus says the battery will last up to 12 hours – but, as usual, the reality didn’t quite match the claim. In my experience, the Flip C436 lasted 8hrs 43mins streaming HD video at half brightness.

I also used the C436 as my work PC. Word processing tasks with some web browsing in-between, with brightness set to high, saw it last 5hrs 48mins. This isn’t true all-day battery life, although our video test score shows we’d probably get closer to eight hours if we scaled-back on the screen brightness, and stuck to writing docs.

Charging the battery is via one of the two USB-C ports, and the adapter is pleasantly small. 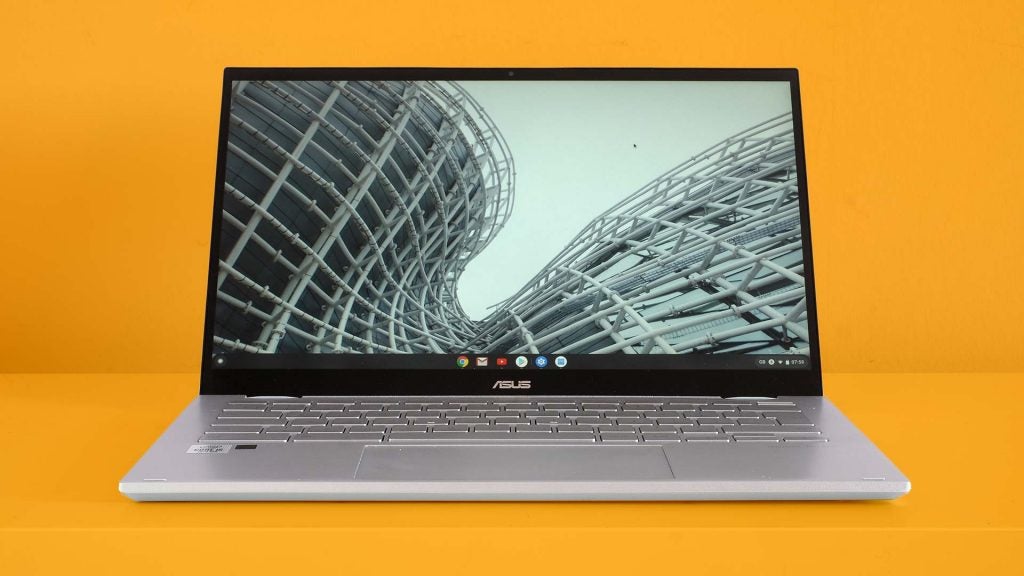 Should you buy the Asus Chromebook Flip C436?

The Asus Chromebook Flip C436 makes you question the purpose of Chromebook. If it’s simply a device for doing the basics, such as household admin and browsing websites, should you pay £1000 for one?

Not everyone needs to run pro-grade software, but as the price rises, the issues of Chrome OS become more apparent. You won’t be able to run “proper” versions of applications such as Photoshop, nor games such as Minecraft, Fortnite or PUBG (properly) either.

Nevertheless, the Asus Chromebook Flip C436 hardware itself is solid, lacking only a few of the finishing touches of the very best laptops. But, at this price, it’s a tough sell. We recommend saving money and opting for a cheaper Chromebook, or spending a little more for a far superior laptop that doesn’t suffer the Chrome OS compatibility issues.