What is the Asus Chromebook Flip C302C?

When it comes to compact Chromebooks, Asus is one of the best manufacturers out there – and, to be entirely truthful, one of the only manufacturers too. We rather liked the Flip C100PA, a dinky 10-inch notebook running Google’s Chrome OS. This teeny slab of tech boasted fantastic battery life and a flexible design, so you could twist it around and change it into a tablet on demand.

Well, Asus is back with a fresh new Flip Chromebook for 2018. The Flip C302C is basically a successor or sequel to the C100PA, once again boasting that twisty design.

Size-wise it‘s a little larger, sporting a 12-inch screen. Yet it remains lighter than one of its biggest rivals, the Chromebook Spin 11 from Acer.

So is this the ultimate portable Chromebook right now, or should you look elsewhere? 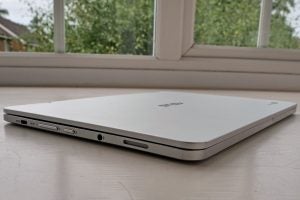 If you’re constantly on the go and you need a portable pal to stay productive, or simply to keep yourself entertained, then the Flip C302C is well worth considering.

Asus has produced a device that’s reminiscent of those old-school netbooks we were all using a decade ago. It’s compact and slender enough to easily fit inside a smaller backpack or even a good-sized handbag, while the 1.2kg weight beats most Chromebook rivals. You’d have to pay top dollar for a Windows machine this slim.

The Flip looks pretty decent, too, with a simple yet sleek silver finish reminiscent of Apple’s laptops. You won’t find much in the way of frills, but that curved chassis is perfectly attractive and also reassuringly tough. I found only the merest hint of flex in the palm rests, while the lid barely bends at all under stress.

As with the previous Chromebook Flip, the C302’s hinges allow that display to be pushed all the way around, 360 degrees. This automatically disables the physical keyboard and basically turns the device into an Android tablet. Of course it’s a rather hefty tablet, so you’ll need to rest it on your lap or a table unless you have biceps the size of Brussels.

I also found that the virtual keyboard was an absolute nightmare to use. For some reason, the Shift key kept automatically activating when I was midway through a word, so my messages looked like they were typed out by a deranged toddler. Definitely switch back to laptop mode if you want to write anything at all.

This flexible design means that you can also put the Flip into ‘tent mode’. In tent mode you can easily and comfortably access that touchscreen, so it’s good for editing documents by touch or simply kicking back with some Netflix. 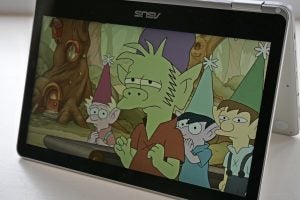 Chromebooks aren’t exactly known for their full and varied selection of ports, yet the Flip C302 is particularly miserly – an unfortunate sacrifice for the compact design. Still, at least the two USB 3.1 Type-C ports are split between the laptop’s sides, and you get an SD card reader too.

That’s your lot though, so if you need a device to which you plan to connect lots of peripherals, you might want to look elsewhere (or invest in a hub). Bear in mind that if you’re charging the Flip, then that’s half the port count already gone. 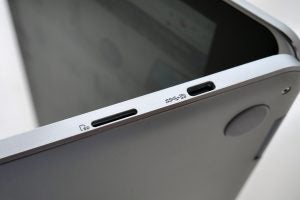 I’m a big fan of Asus’ laptop keyboards, which always seem to be comfortable for non-stop typing. Thankfully, the Chromebook Flip C302 is no different. Even with the limited space to work with, Asus has once again come up with the goods.

That chiclet-style board stretches close to both edges, so individual keys are afforded plenty of room. I found that I immediately adjusted to the layout and in no time at all I was touch-typing at a great speed, with few mistakes. I was also happy to see the Return key stretching across two rows – as it should – rather than being compressed into a single row. 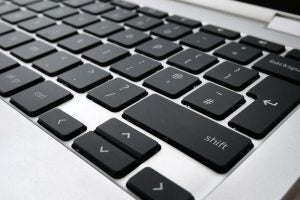 Good news if you like working into the wee hours as well. The board is fully backlit, with the lights automatically activating when you begin typing. I couldn’t actually find a way to turn off the backlighting to save power, however.

As usual, you have a row of Chrome OS shortcut buttons up top as well. While there’s no dedicated media controls, you do at least get volume controls and a mute button. And the lock button is also handy for when you step away from the Flip for a moment, without wanting to completely power down.

You get a well-sized touchpad as well, although it isn’t great. I found it quite sticky to use, so I bypassed it completely and used the touchscreen display instead. A quick poke, swipe or pinch on that panel does exactly what you need, with perfect responsiveness. Especially satisfying when you switch to tablet mode.

The Flip C302 definitely boasts one of the best Chromebook screens outside of Google’s own Pixelbook. That 12.5-inch panel produces sharp, detailed images thanks to the Full HD+ resolution, so your photos and movies will look great.

Viewing angles are pleasingly wide, and that flexible hinge means you’ll have no trouble getting a good view in pretty much any position. On top brightness I had absolutely no difficulty seeing what I was doing either, even when sat outside in strong daylight. 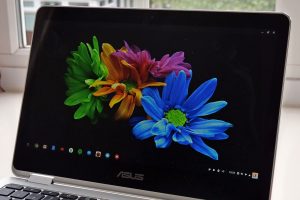 Colour reproduction is impressively accurate, so pictures really pop off the screen. Contrast is also solid for a Chromebook, and I didn’t notice any issues such as tearing while watching sports or action movies.

Many Chromebooks have the speakers sitting down below, leading to the sound being muffled by your desk or lap. Asus has smartly positioned the stereo blasters on the Flip C302’s edges instead, so that isn’t an issue here.

That said, they aren’t exactly super-powerful, as you might expect given this laptop’s compact chassis. You can just about make out dialogue when watching a show in a noisy room or outdoors. You’d be better off connecting headphones or a dedicated speaker, especially if you’re hoping to listen to music. Frankly, the audio quality on top volume is best described as ‘pants’. 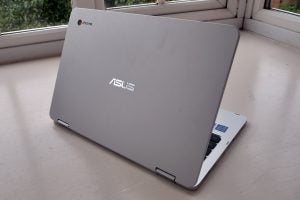 On the left edge of the Flip C302 you’ll find a dedicated volume rocker, which can be used when the device is in tablet mode. Handy for sure, since the keyboard controls are obviously out of reach and deactivated with the screen flipped around.

You can grab the Chromebook Flip in a couple of different configurations, depending on your budget and needs. The version we reviewed was the Intel Core m3-6Y30 model, and it proved perfectly fine for everyday life. 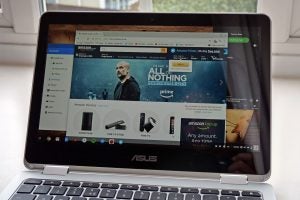 Rarely did I notice any kind of stutter, while apps all loaded quickly enough. Even with several open at once, I found that I could skip between them all without delay; the Flip C302 didn’t struggle.

You can also play the latest Android games with a smooth frame rate, although capping fools in the likes of PUBG Mobile is still far easier on a smartphone.

One of the biggest advantages of Chromebooks is their dependable battery life. The simplicity and energy efficiency of Chrome OS, combined with low-powered components, means you can generally keep going all day long.

I found that I could get a standard working day of use out of the Flip, as long as it was fully charged to start with. Typically, I’d be working in the Chrome browser while streaming music via Spotify, often to my Bluetooth headphones. That would give me at least eight hours of play time. 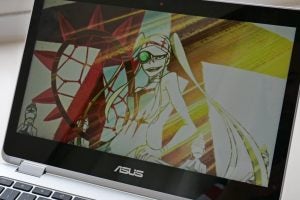 If you simply want to stream video, then this Chromebook is comparable to rivals. Again, you can expect around eight hours of playback before the battery is drained.

Although you’ll find cheaper Chromebooks on offer these days, the Flip C302 is a solid all-round option. It’s pleasingly compact and offers a satisfying everyday experience, thanks to the crisp and colourful display, thoughtful design and compact nature. At the time of writing, we’ve seen that some retailers including John Lewis are selling this for £399, down from the standard RRP of £499.

That impressive portability is the Chromebook’s greatest strength, with the light chassis and strong battery life combining to great effect.

A highly portable and well-designed Chromebook, although the Flip C302 is more expensive than most of its rivals, Pixelbook aside.