What is the Asus Chromebook Flip C100PA?

The Asus Chromebook Flip C100PA is a budget laptop with a 360-degree hinge. Dubbed by Asus as “the world’s first 10-inch convertible Chromebook”, this feature undermines precisely what is attractive about a budget laptop.

Despite the decent eight hours of battery life and surprisingly impressive 10.1-inch IPS display, the flexibility on offer as a result of the hinge adds to the laptop’s weight – and, more importantly, the price of the device. £250 is a big ask for a budget-friendly device, which might leave students and low-power users looking elsewhere.

One of the first things you’ll notice about the Flip when you open it up is the bezel. At more than 2cm at the sides and 2cm top and bottom, the 10.1-inch IPS display looks far smaller than it actually is. That isn’t to say the device is unattractive for the price: the brushed chrome and black colour scheme actually looks pretty decent for a laptop at this price.

Ports are at a premium here, but the basics are covered. There’s a charging port on the left-hand side, with two USB 2.0 ports, headphone jack, mini-HDMI and a microSD card reader on the right. A slight frustration is the oddly placed power button on the left of the C100PA’s frame: at the nearest end to the user, next to a physical volume button, I often found myself accidentally pressing the button with my palm as I picked up the Chromebook. 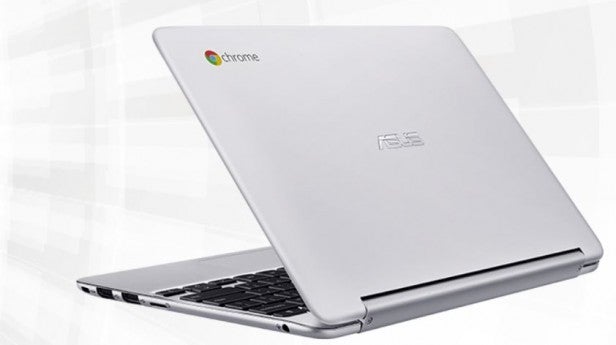 The C100PA has been made with practicality in mind, with many demands being met by the 360-degree element. The Flip comes packing a thick but durable hinge, essential for peace of mind as you contort it in its various positions. For example, the structure feels solid enough in tent mode to not fall over as soon as you prod it with your finger.

However, the strength and durability made necessary by the feature adds unfortunate weight. At 890g, the C100PA is lighter than your average laptop, so it won’t trouble you when you take it around in a backpack. However, it’s heavy for a tablet; the C100PA is almost double the weight of the 9.7-inch iPad Pro and heavier still than the 713g, 12-inch iPad Pro. If you’re after a device that you’ll use primarily as a tablet then it would be wise to look elsewhere. 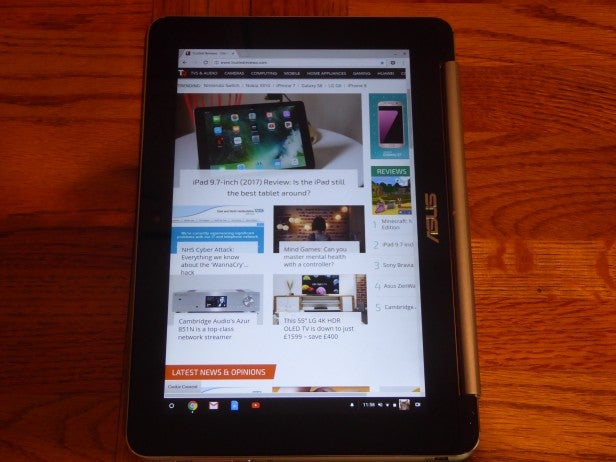 A decent addition is the pleasingly grippy feet on the bottom of the device. You’ll have to try hard to drag the laptop across most surfaces – the fact that the Flip won’t slide off a surface and break easily is a nice safety feature.

There’s no indentation on the front of the laptop, meaning there’s no easy way of opening the lid one-handed.

Typing on the C100PA is a satisfying experience considering the compact form factor. The keys stretch almost to the edges of the laptop, making typing comfortable even for those with larger hands. Key travel is nice and deep – a boon for people who aren’t keen on the limited travel on Apple’s 12-inch MacBook or Microsoft’s Surface hybrids, for example.

The trackpad is responsive, but it’s undeniably small, which is forgivable given the form factor. The click is also a little loud for my tastes, but it isn’t a big deal unless you’re working in silent areas such as a library.

Sound-wise, the C100PA’s built-in speakers are tinny in the way you’d expect from a device of this size. They do at least offer up decent volume. If this is a work laptop, however, you’ll see few uses for the two speakers on the Flip. Here, you’re best sticking to a decent pair of headphones. 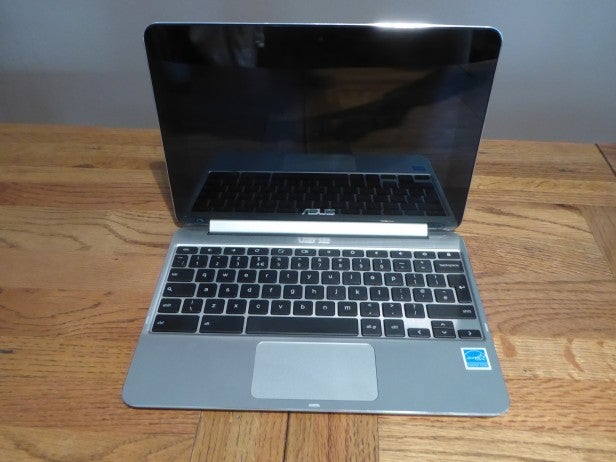 The HD webcam is a neat addition, however. On Skype, you can chat to people well enough with the built-in microphone and the HD graphics mean they appear on the 10.1-inch screen clearly.

Since this is a hybrid, the C100PA comes with a touchscreen, but it doesn’t offer an enjoyable experience. Flipping the keyboard around and interacting with the 10-inch panel feels unintuitive; touch inputs feel vague and you’ll often need to resort to multiple finger presses.

Asus promise that its “exclusive touch-sensor technology” improves accuracy and responsiveness, but this didn’t play out in my experience.  It doesn’t help that the screen will quickly become grubby too. 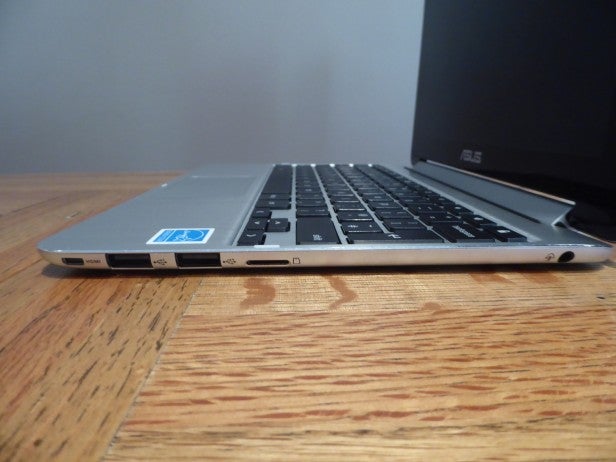 Given how tactile and pleasing the physical keyboard is to use, the touchscreen keyboard will rarely serve as a practical option, so forget doing much more than streaming videos in tablet, tent or standing mode.

Better is the snappy way in which the screen transitions from portrait to landscape and the strong 1280 x 800-pixel IPS display. Given the need to be able to view this screen from various angles, the wide viewing angles of the IPS technology are certainly a boon. But that low resolution is a problem, especially for putting two windows side-by-side for better multi-tasking.

Asus promise an all-day battery life of nine hours, but realistically you’re looking at closer to eight. This is especially true when streaming video: an hour of Netflix will see your battery drain by around 13-15%.

Essentially, this means that the C100PA is a perfectly serviceable device for working through the day for low-intensity tasks such as web browsing and social media, but you’ll find batteries of similar quality in cheaper Chromebooks.

Chromebooks don’t run Windows, and instead run Google’s ChromeOS. It’s an operating system well suited to lightweight tasks, since most of the stuff you can do happens in a web browser. Some Chromebooks now allow for Android apps to be installed, but this isn’t possible with the Chromebook Flip.

If you’re not already familiar with working with web-based services such as Google Drive and Docs, and web-based photo software such as Pixlr, it could all come as a bit of a shock. But most of these apps now work fine without an internet connection – although they work better with one – and for buyers just looking to take a few notes or knock up some text documents, it’s a great operating system.

Running Google’s pared-down Chrome OS, performance is solid for a casual user. Housing a Rockchip Quad-Core RK3288C processor at its core, you’ll rarely be met with long load times when conducting simple tasks on the Chromebook flip. It’s a common bang-for-your-buck processor on ultra-budget laptops, and while it isn’t bad, if you’re a heavy user you will experience issues.

With a number of tabs open at once, you’ll see a performance drop. When I had ten tabs open, for example, scrolling through sites such as TrustedReviews and Twitter became a slower experience. You’ll also lose upwards of an hour of battery life if you go for a tab-heavy session.

Despite the loud click of the trackpad, the machine as a whole runs near-silently and generates very little heat – even after all-day sessions. This is an important factor for those looking at completing light productivity tasks.

Should I buy the Asus Chromebook Flip C100PA?

As a budget 2-in-1 system, the Asus Chromebook Flip C100PA represents an awkward niche. £250 is a little steep for buyers on a budget, but this price bump is necessary due to the demands placed on the machine by the 360-degree functionality.

The HD IPS display offers wider viewing angles than its TN alternatives, making video streaming possible in all the C100PA’s various positions. However, the touchscreen simply isn’t as nice to use as the comfortable keyboard.

When key features of the device aren’t worthwhile they become gimmicks, which makes the C100PA tough to recommend to those looking for a cheap Chromebook. If that’s you, you might be better served by the likes of the £189 HP Chromebook 14 or the £195 Acer Chromebook 15.

If you’re set on impressing your friends or work colleagues with the 360-degree hinge, then you can find cheaper hybrids such as the Acer R11, which offers a slightly larger 11.6-inch HD panel and either a 16 or 32GB SSD to sweeten the deal.

The Asus Chromebook Flip C100PA is a solid device for light users, but its disappointing flippy screen feature bumps the system up to a premium price for those looking for a cheap Chromebook. The £200 Asus Chromebook C201 doesn’t have the flexible hinge, but comes in a full £50 cheaper.