The Asus Chromebook C201 is powered
by Google’s Chrome OS. For those out of the loop, Chrome OS is a cloud
based, open source, desktop operating system based on the Linux kernel
Google originally released in 2009.

The OS is designed to let PC
and laptop makers offer top-end performance while using low-end
components by leveraging the cloud. It works by offloading the majority
of the work traditionally handled by laptop’s CPU and GPU to cloud
servers owned by Google.

This means, as long as you have an
active internet connection Chromebook’s should offer significantly
faster performance than their components would suggest.

In the
past I’ve found, while the performance boosts Chrome OS offers when
connected to the internet are great, its cloud focus is a mixed bag for
two reasons.

First, Google uses Chrome OS as a platform to push
its ecosystem, making it so you can only run cloud apps, or services in
Chrome’s Web Store on Chromebooks.

This is fine for people
embedded in Google’s ecosystem using things like Gmail, Calendar and
Drive as their main productivity tools, but in the past has been an
issue for people using Microsoft’s services. 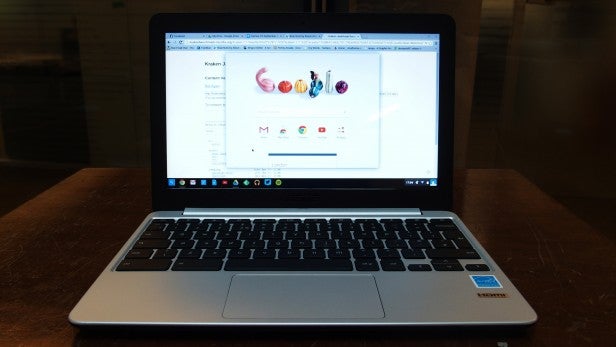 Second, when Chrome
OS first came out key apps, like Google Docs and Drive had woefully poor
offline modes, meaning if you didn’t have an active internet
connection, a Chromebook was essentially a fancy paperweight.

Luckily,
Google’s done some stellar work fixing these issues with Chrome OS over
the past few years. Since Chrome OS first launched competitors, like
Microsoft, have been steadily rolling out cloud based versions of key
productivity tools, such as Microsoft Office, Skype, OneDrive.

As a result, Chrome OS now offers a complete suite of productivity services that will meet most consumer’s needs.

Chrome OS’ file management
system has also been updated, to make it easier to see what files are
currently being stored locally on the Chromebook.

The only area
still really lacking on Chrome OS is entertainment. Sure online
services, such as Spotify, Netflix and Amazon Instant video, have online
versions that work on Chrome OS. But there’s no easy way to play movies
and TV on the Chromebook without an internet connection – a fact not
helped by the fact it features a piddly 16GB of in-built, local storage.

Gaming
is also woefully under served and without an internet connection you
won’t be able to play anything more developed than Solitaire on a
Chromebook.

Powered by a
Rockchip Quad-Core RK3288C CPU, integrated Rockchip Mali T764 GPU and
either 2GB or 4GB of RAM, the C201 is fairly powerful by Chromebook
standards.

By comparison, the Toshiba Chromebook to runs using an
Intel Celeron processor that’s paired with 4GB of RAM in the Full HD
model and 2GB of RAM in the HD version – though a new version running using Intel’s new Broadwell line of chips is set to arrive later this year.

Gauging the processing
muscle of a Chromebook is difficult for a couple of reasons. First, as
mentioned before, because the majority of the work traditionally tasked
to a laptop’s CPU and GPU is offloaded to the cloud. Second, because
most standard benchmarking tools don’t work on Chrome OS. 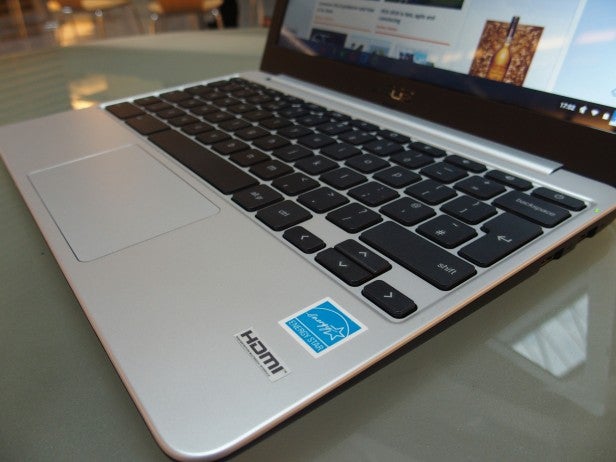 To get
round the second problem I used the java-based, Kraken benchmarking
tool. The benchmark tests browsing speeds, and by extension general
performance, by timing how long the laptop takes to perform a series of
automated tasks.

With
real world use, I didn’t notice any performance niggles on the
Chromebook C201. Using it offline or online, applications opened
instantly and the Chromebook never once chugged, even when running
multiple content rich website in the Chrome browser.

Asus
quotes the Chromebook C201’s 2-cell, 38 Watt-hour battery as offering 13
hours mixed use. With everyday use, while I never made it a full 13
hours, I was seriously impressed with the Chromebook’s battery life.

Streaming
video content on Netflix and BBC iPlayer I found the Chromebook
generally discharged between 10 to 15% per hour – which is seriously
impressive, regular laptops usually lose at least 20% running the same
test.

With normal use the Chromebook generally lasted between
11-to-12 hours of a single charge. Normal use entailed using it as my
main laptop, browsing the internet, watching a few shows on Netflix and
working on Google Docs throughout the day.

The Chromebook C201 also charged reasonable quickly. In general, it managed to fully charge from 0% in 45 minutes. 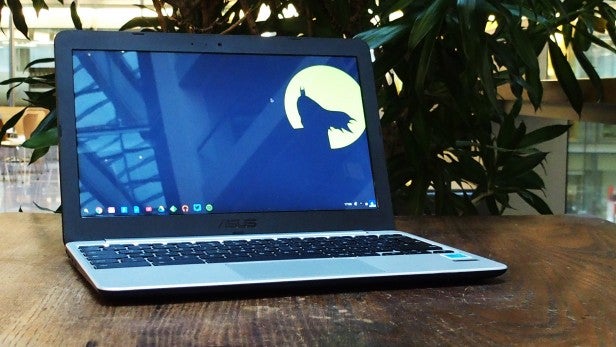 Should I buy an Asus Chromebook C201?

Outside
of its disappointing screen the Chromebook C201 is a competent laptop
that will meet most buyers productivity and web browsing needs. However,
thanks to Chrome OS’ cloud-based nature, there’s little here for
gamers, or people outside of Google’s ecosystem without a regular
internet connection.

It’s also important to remember the Full HD Toshiba Chromebook 2 offers the same functionality and features a significantly better display – meaning, it could be a better option if you can afford the extra £50.

Asus C201 is a stellar Chromebook, that’s slightly let down by a poor display.