What is the Asus Chromebit?

The PC-on-a-stick is a pretty remarkable creation. Until recently, we were all saving our documents onto similarly sized USB sticks, and now, these dongle-like devices are being used to house entire computers. The concept is simple: just plug the stick into an unused monitor, connect a mouse and keyboard, and you’ve basically got a brand new all-in-one.

While most purveyors of these mini PCs have opted to provide you with what is essentially a Windows 10 desktop on a stick, Asus has gone with Google’s Chrome OS. At around the £90 mark, The Chromebit is also slightly cheaper than most Windows 10 options, with Intel’s Compute Stick coming in at anywhere from £90 to £115, and Lenovo’s Ideacentre Stick going for between £100 and £130.

On its face, it’s a smart decision to put Chrome OS on a PC stick, considering the operating system relies mainly on cloud computing power rather than built-in hardware, making for a smoother user experience than the more power-intensive Windows 10. But there’s no denying Microsoft’s OS is a more comprehensive operating system, and with several Windows alternatives on the market, can the Chromebit’s lower price make up for reduced functionality? Well, as it turns out, the answer is yes. 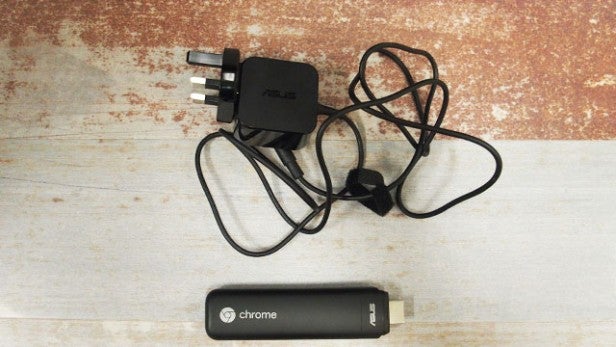 There’s not much that can be said about a black piece of plastic with an HDMI connection on the end. You can get the device in matte black or orange, and the whole thing’s appearance is fairly modest – which is the idea. The Chromebit is designed to sit discreetly behind your monitor, and it manages to do just that with its compact design, rounded edges, and lack of accoutrements.

At 4.84 x 1.22-inches, Asus’ device is compact, but larger than a standard USB stick. It’s also longer than the original Chromecast which came in at 2.83-inches. If you’ve used the Intel Compute Stick, you’ll have a rough idea of the Chromebit’s dimensions. Intel’s device is about the same size, although slightly shorter at 4.5-inches and slightly wider at 1.5-inches.

Related: A guide to PC sticks 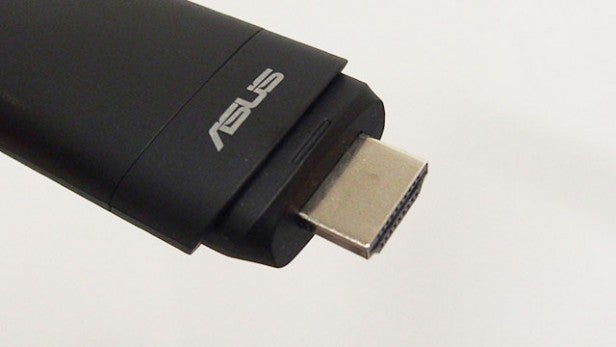 In terms of weight, the Chromebit certainly feels fairly hefty for such a small device. But when you consider that there’s an entire computer housed within, it’s actually surprising the thing doesn’t weigh more. At around 76g, the Chromebit is lighter than the Ideacentre Stick and Compute Stick, which weigh 272g and 381g respectively.

If portability is your main concern, the Chromebit isn’t going to cause you any trouble. It’s obviously going to take up less space in your luggage than a laptop if you travel a lot, byt you’ll still need to take a separate mouse or keyboard. With that in mind, it’s hard to see why you’d opt for the Chromebit over a laptop or tablet when travelling, considering you’re beholden to a static screen and unable to use it while actually travelling. But there’s no denying the small form factor makes this an easy device to transport if that’s what you’re looking for. 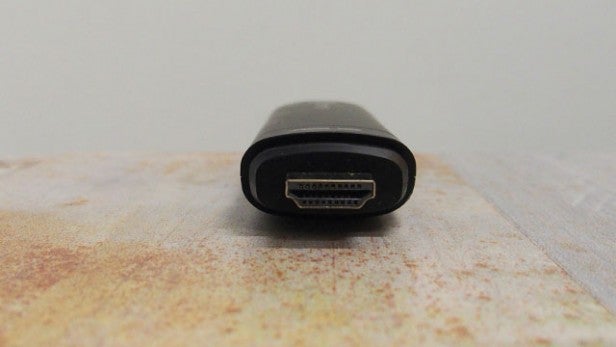 If you’re using the Chromebit for what I see as its main purpose, i.e. recycling an unused monitor into an all-in-one PC, you’ll be pleased with how inconspicuous Asus’ little black stick is.

Asus has made the setup process mercifully easy. Once you plug the Chromebit into an HDMI port and connect the included power adapter, you’ll be greeted by a setup process which asks you to connect a keyboard and mouse (thanks to built-in Bluetooth 4.0, you’ll be able to use wireless peripherals), and find your wireless network. Once you’ve done that, the Chromebit will start downloading updates, before asking you to log in using your Google account details.

I had no issues with the device recognising my Bluetooth keyboard and mouse and had the entire thing set up and ready to use in a matter of minutes. If you would rather use a wired set of peripherals, the Chromebit does have a USB port. But, seeing as there’s only the one, you’ll need a USB hub if you want to use both a wired mouse and wired keyboard. 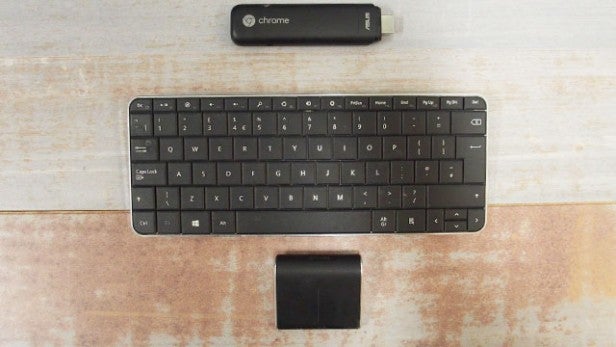 It’s worth noting that if your TV is hard up against a wall, the Chromebit’s length may prove a problem. You need at least 5-inches of clearance between the wall and the back of the TV. Luckily, Asus has provided a 1-foot (30.5cm) HDMI extension cable with the Chromebit.

But, be warned. Although the majority of users won’t be affected, my TV’s HDMI ports are side-facing, meaning that the Chromebit sits parallel to the back of the TV once connected. If there were any less room between the HDMI ports and the back panel of my TV, the Chromebit wouldn’t have fit. I had to wedge it in to get it working as it was.

Of course, you can use the extension cable, but if you’re hoping to keep the Chromebit as discreet as possible, this small issue might foil your plans. 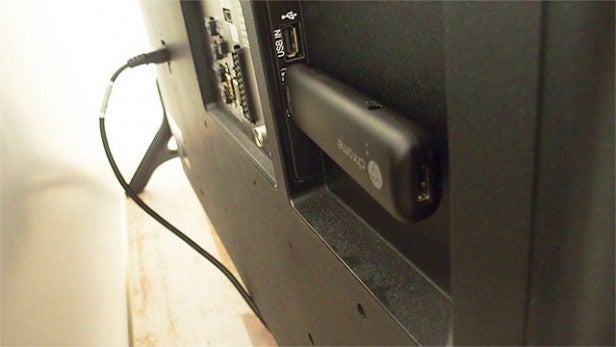 The stick comes with a quad-core Rockchip RK3288-C chipset, 2GB of RAM, an integrated Mali-T760 GPU, and 16GB of internal storage. That’s 16GB less storage than the Intel Compute Stick, but with the emphasis on cloud power, you’re hardly going to miss the extra memory.

The processor, from Chinese chip-maker Rockchip, is the same one Asus used in its Chromebook Flip two-in-one. In fact, the Chromebit’s internals are essentially the same as the entry level version of that laptop. 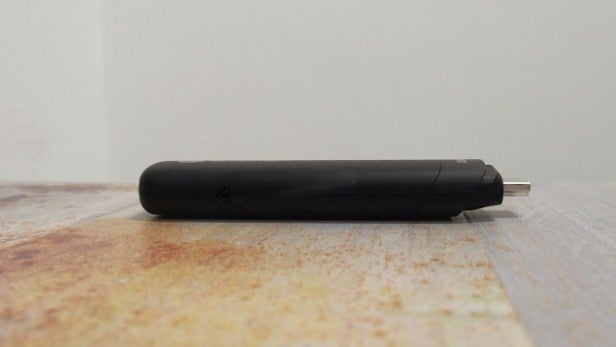 There’s also no option to upgrade. The Chromebit comes with this standard setup and will stay that way for the duration of its existence. Again, Google’s operating system has been designed for cloud-based work, making hardware upgrades somewhat superfluous. Chrome OS does have some file management features, but the whole thing is basically centred around the Chrome web browser and various Google online services and apps, such as Gmail, Docs, and YouTube. As such, the standard hardware configuration is perfectly adequate.

So what do all these specs add up to? In short, surprisingly solid performance. Chrome OS, with its focus on cloud computing, is the perfect PC-on-a-stick operating system. I always felt it wasn’t quite comprehensive enough to warrant its own range of laptops, but on this small device, it seems perfectly at home. 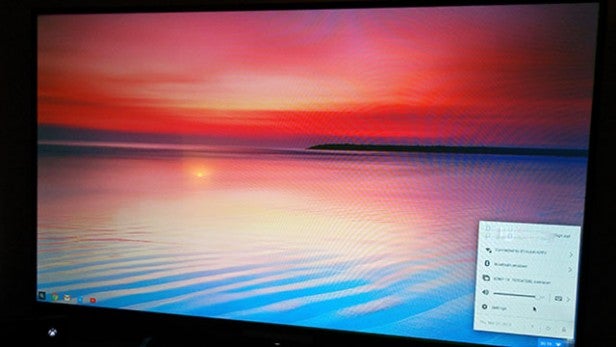 The Chromebit can handle most tasks without too much slowdown. I used it mainly for streaming video. From BBC iPlayer to YouTube to Netflix, the stick managed to stream without any performance issues at all, likely thanks to the Mali GPU which helps bolster streaming capabilities. Most of the videos I watched were in 1080p, and the only problems I had were with my abysmally slow home network.

The Chromebit also handled multiple tabs in Chrome with ease. I had several tabs on the go, some of which were playing HD video, and I had absolutely no problems. Considering the OS was built to essentially run Chrome you’d expect a fairly fluid experience, but it’s still impressive that these small devices can run various apps and web pages so easily. 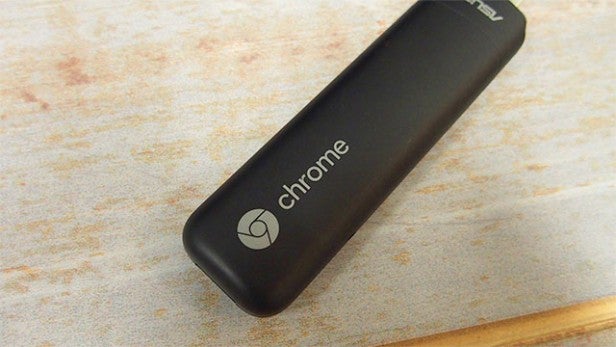 One thing I did notice is that Asus’ PC stick gets fairly hot, even after after brief usage. The top of the Chromebit got particularly warm after about 10 minutes of me using Chrome to visit a few websites. It’s not going to melt your HDMI port or anything, but it’s worth bearing in mind.

Should I buy the Asus Chromebit?

Asus’ PC-on-a-stick melds compact design with the perfect operating system for such a device. Chrome OS seems as though it was made for the Chromebit. What’s more, the Chromebit is cheaper than both the Intel Compute Stick and Lenovo’s Ideacentre Stick. Granted, you won’t get the expanded desktop experience that comes with those Windows 10 devices, but you also won’t get as much of the slowdown that comes from such a small thing trying to power a larger OS.

For travel, I’d still opt for a laptop or tablet. For business travellers, the idea of turning your hotel room’s TV into a PC might appeal, but you’ll still need to haul around the keyboard and mouse. Considering you won’t be tethered to a static monitor with a laptop or tablet too, it’s hard to recommend the Chromebit as a travel alternative, despite it’s small design. 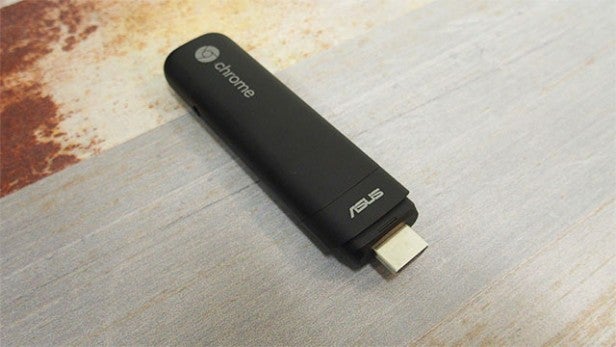 If you have recently upgraded your monitor or TV and are unsure what to do with your old one, the Chromebit is a cheap and straightforward way to revitalise it by turning it into a new all-in-one. If you also happen to have a spare Bluetooth mouse and keyboard laying around, this is a no-brainer.

A cheap and easy way of turning an old monitor into an all-in-one PC, the Asus Chromebit makes up for a somewhat limited desktop experience with great performance and ease of use.