The Asus CG32UQ serves up solid quality, decent HDR and plenty of features – but this console-focused display isn't big enough for the living room

The Asus CG32UQ is a large, imposing gaming monitor designed for consoles – the CG in its name stands for Console Gaming.

It certainly has the specification to provide a big, bold gaming experience. It’s a 31.5in display with AMD FreeSync, DisplayHDR 600 and a 4K resolution – as well as more than 60 RGB LEDs.

This screen is designed for console players, but could obviously be used for PCs too. It isn’t cheap, though, costing £779/$800.

The CG32UQ serves up a cart load of features that will appeal to gamers, but in some departments its specification is somewhat underwhelming.

The basics are good. The 4K resolution means you have a sufficient number of pixels to handle anything the PS4 Pro and Xbox One X can output – as well as the next generation of consoles. It’s also good enough for high-end PC gaming. The density level of 140ppi is great – it keeps games looking crisp. The VA display is a decent choice, since it should deliver huge contrast levels. 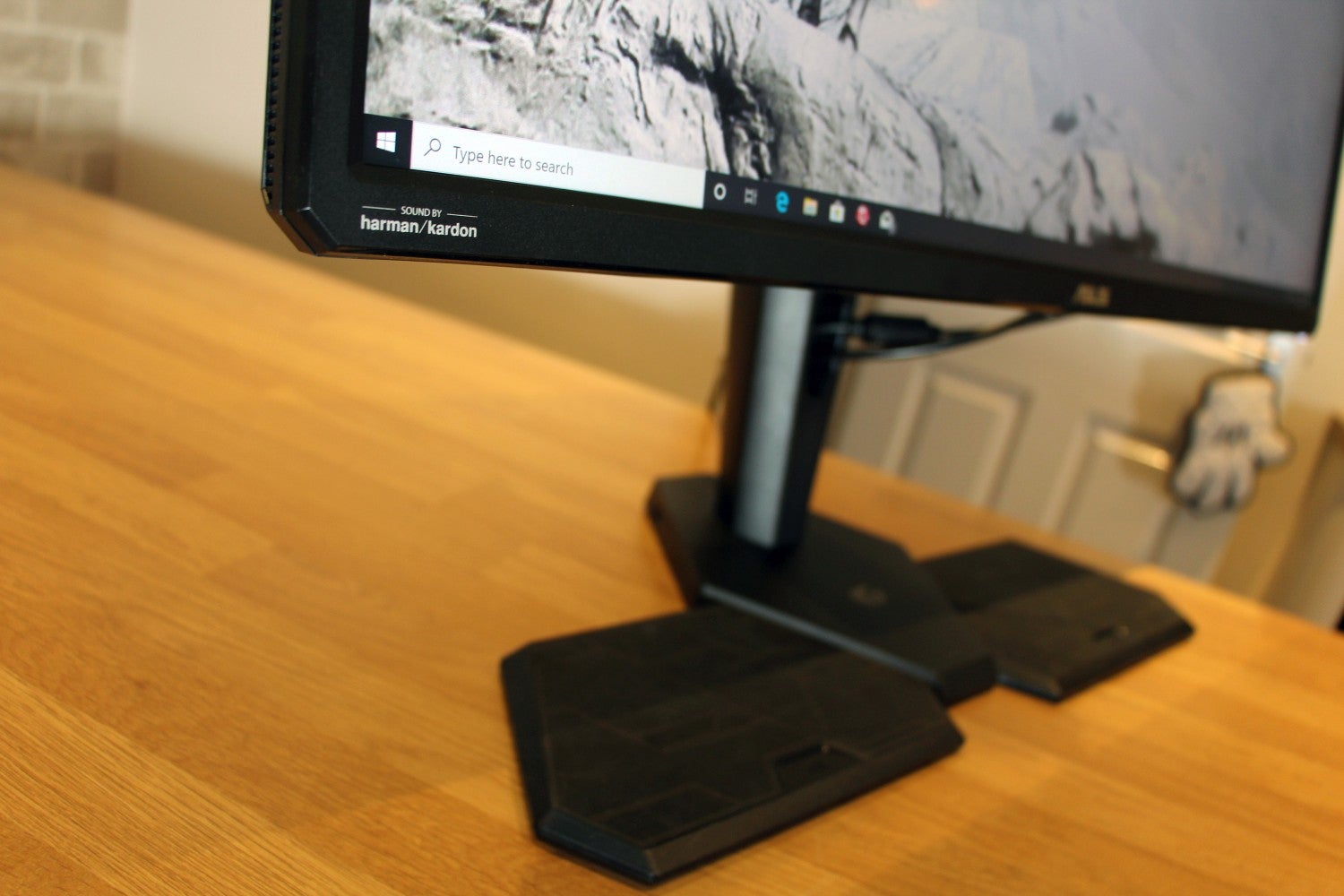 The Asus deploys DisplayHDR 600, which demands that a screen deliver a 600-nit brightness level and a 0.1-nit black point – you’ll certainly see the difference to HDR games. Crucially, DisplayHDR 600 also demands local dimming, which means that it will have better control over contrast than the entry-level DisplayHDR 400 protocol, which barely makes a difference to games at all.

The CG32UQ has a decent core specification, then –but it isn’t without problems.

The 32in diagonal is large in the context of PC monitors, but small when compared to TVs. This screen certainly isn’t big enough for a living room. It’s a better fit for a bedroom, a desk or an office, but you’ll have to consider its size if you’ll be sat a reasonable distance away. 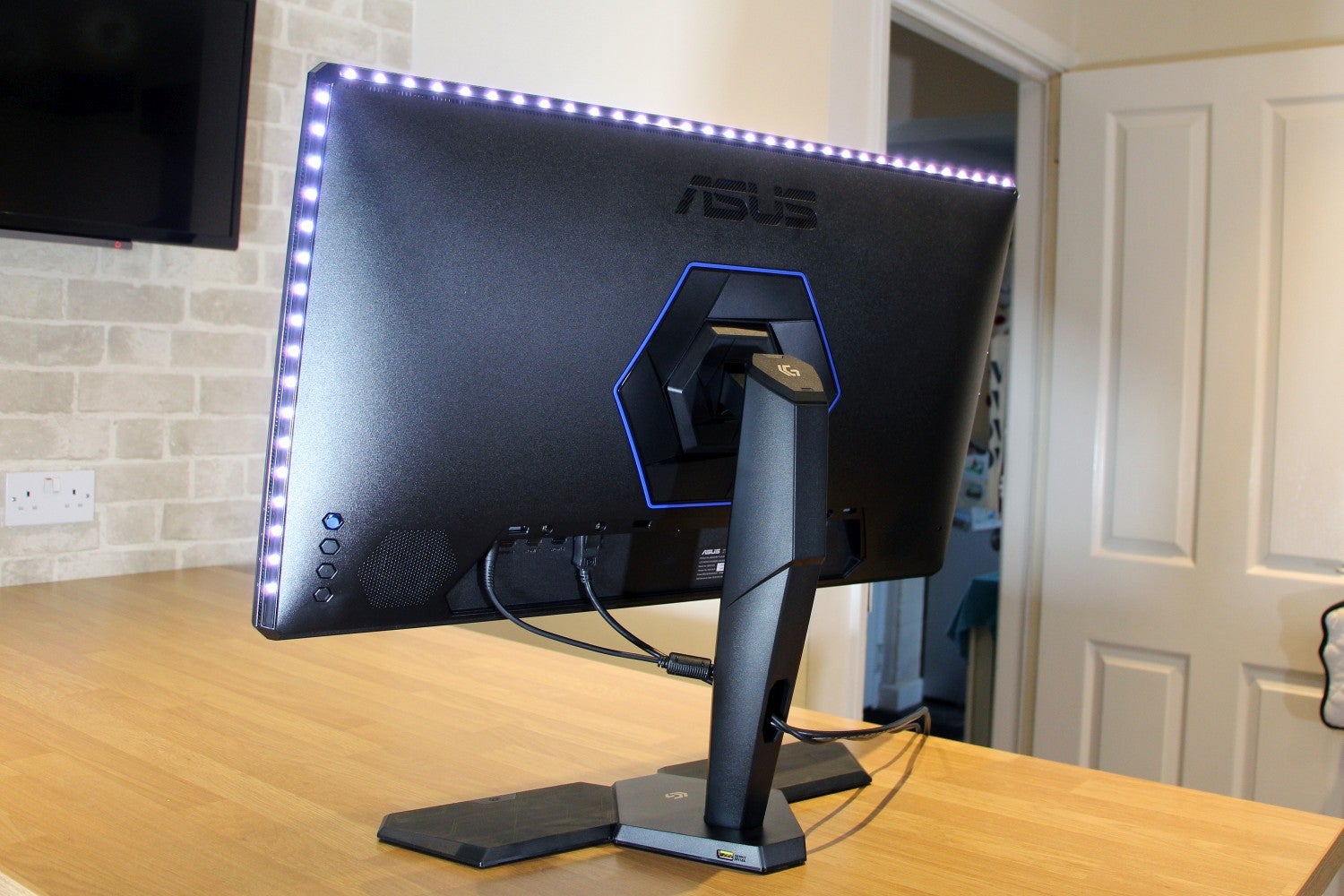 The screen here is a little grainy, which will be noticeable if you sit close to the display. The response time of 5ms is fine for console gaming and for most competitive scenarios, but keen competitive gamers will not be sated.

The AMD FreeSync implementation could be better, too. The Asus tops out at 60Hz and works with both AMD and Nvidia graphics cards. That’s a high enough refresh rate for smooth single-player gaming, and decent for a 4K panel – get beyond 60fps and a lot of graphics cards will struggle. 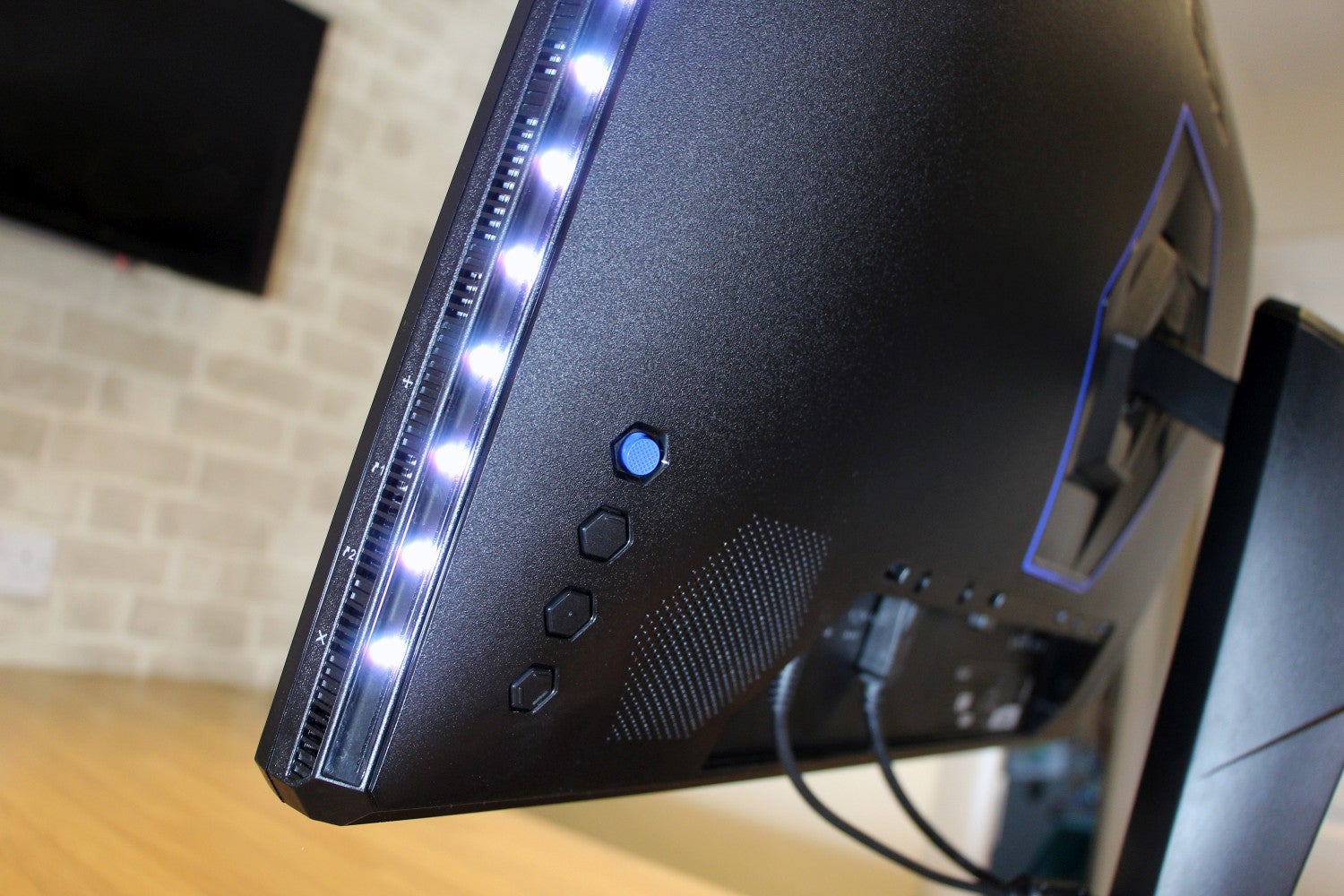 However, Sony is aiming for 120Hz with the PS5, Microsoft has talked about 120Hz for Xbox, and many less-demanding eSports games and single-player titles will run at 4K at speeds beyond 60fps. It’s disappointing that the CG32UQ doesn’t at least give gamers the option to go higher.

The CG32UQ is a robust display with good build quality and neat features. For instance, the wide stand has rubber pads for holding peripherals and two USB ports for charging phones and controllers. The panel itself has a further two USB ports alongside a trio of HDMI sockets and one DisplayPort connection.

The Asus has a reasonable 100mm of height adjustment and 25 degrees of tilt, but no swivel. That’s not a surprise for a screen of this size, but conventional PC panels will offer more versatility. 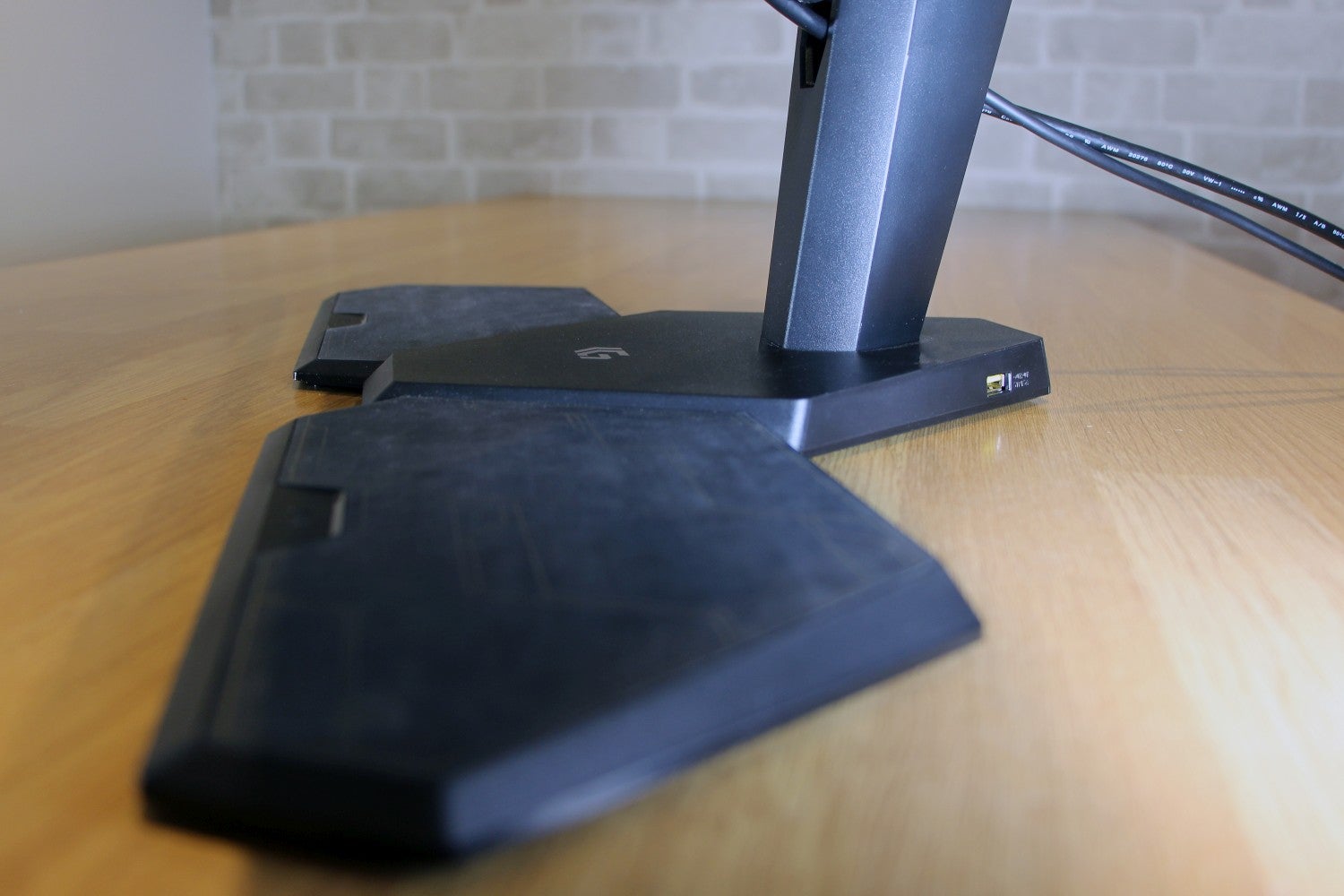 The CG32UQ’s console focus means a big, bold on-screen display. The menu system is huge, and designed with bright blue graphics and hexagonal shapes. It’s navigated by a joystick and buttons on the back of the screen, and Asus also includes a remote control.

Get past the outlandish looks and you’ll find a conventional system. The OSD always provides a summary of the screen’s key settings, and the options for tweaking modes, colours, inputs and system settings can be found in the usual locations. 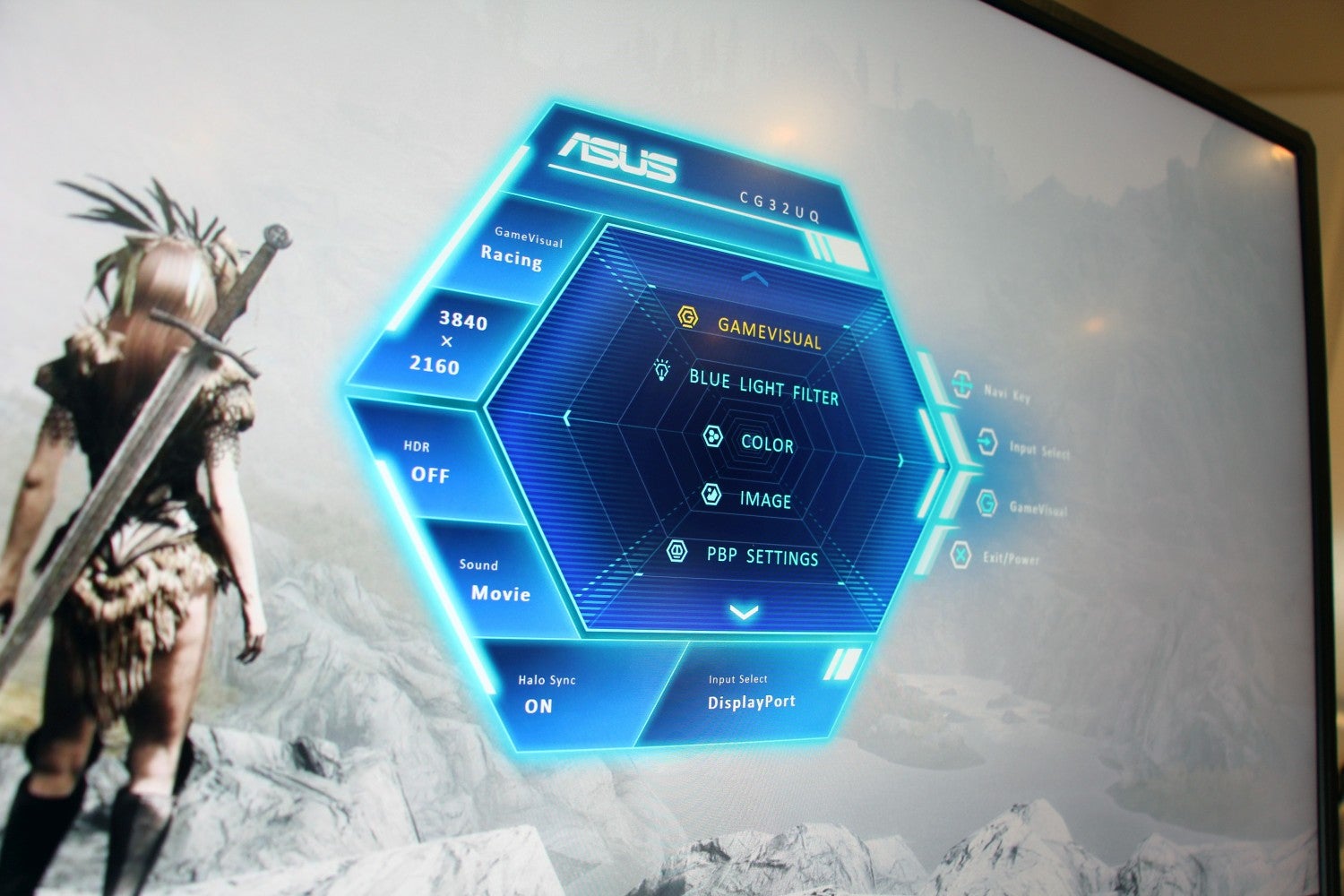 The only slight niggle is that, for all of its bombast, the OSD is slow – you can see the graphics lagging. It’s irritating when you’re trying to quickly change settings.

The rear of the Asus is ringed by 66 RGB LEDs, which can be used to synchronise with games to provide appropriate ambient lighting. They can also run through the usual selection of patterns and static shades. 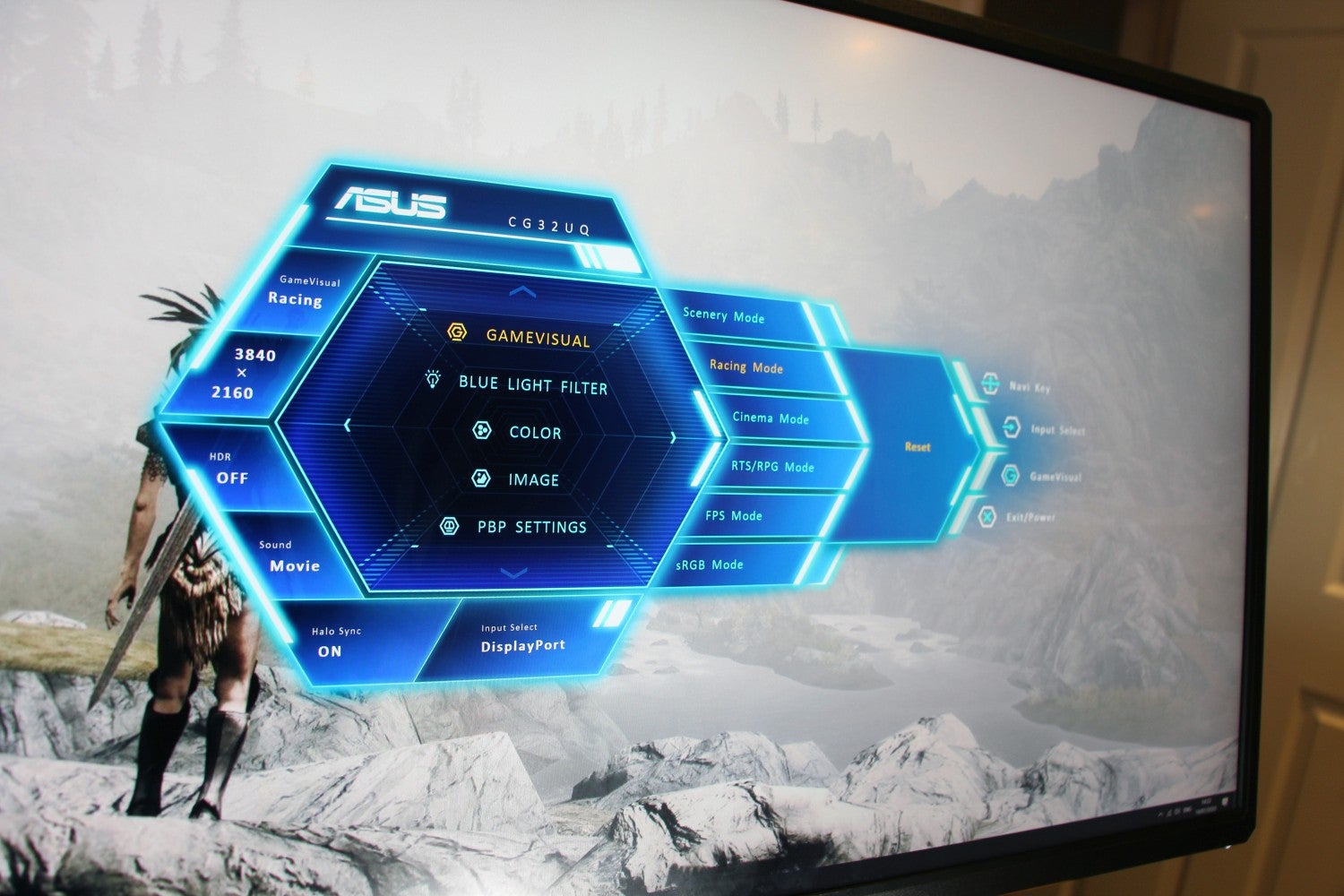 The Asus has two superb 12W speakers. They’re loud and bassy – so explosions, football chants and engine roars sound fantastic. There could be more depth and detail to the mid-range and top-end, but the kit here is easily good enough for gaming.

By default, the CG32UQ uses its Racing mode at 90% brightness – and it gets off to a good start. The brightness level of 425 nits is significant, and the black level of 0.14 is fantastic; together creating a contrast ratio of 3035:1. That’s roughly three times as high as gaming panels with IPS technology. 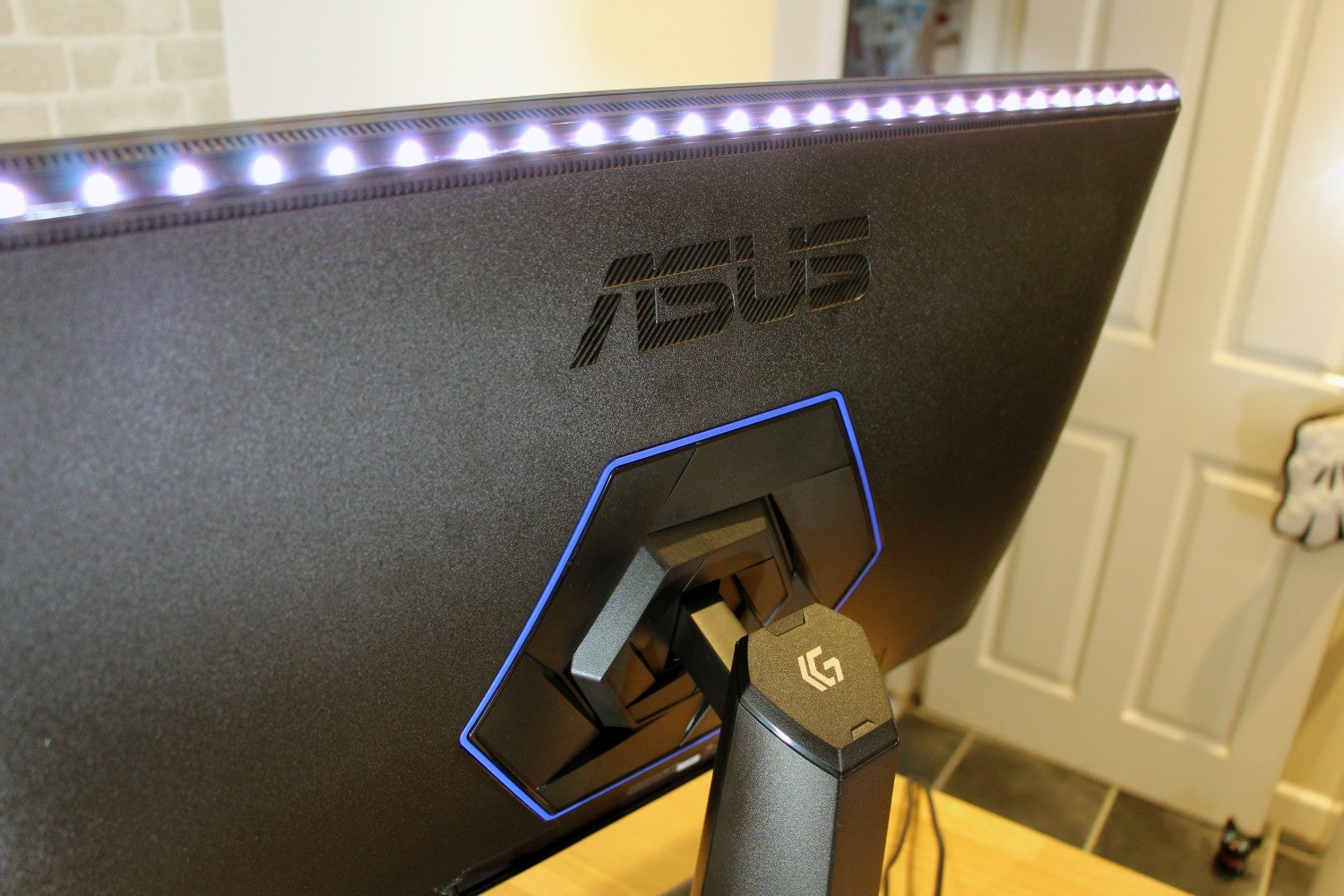 The Asus’ Delta E of 2.2 ensures solid, accurate colours. The temperature of 6,904K is a little chilly, but not so cool that gaming is hindered. The panel displayed 99.8% of the sRGB gamut – fine for mainstream gaming.

Its HDR performance is good, too. In its HDR modes that Asus nearly reaches 700 nits of brightness, with black levels around 0.18 nits – so contrast approaches 4000:1. That means it can easily handle DisplayHDR 600’s requirements, and its 95.6% DCI-P3 coverage level is high.

The huge brightness, deep blacks and local dimming mean HDR games look fantastic here – you get a noticeable boost to contrast. DisplayHDR 1000 still provides more subtle colour and contrast control, but the Asus provides a decent HDR boost and outstrips anything with DisplayHDR 400. 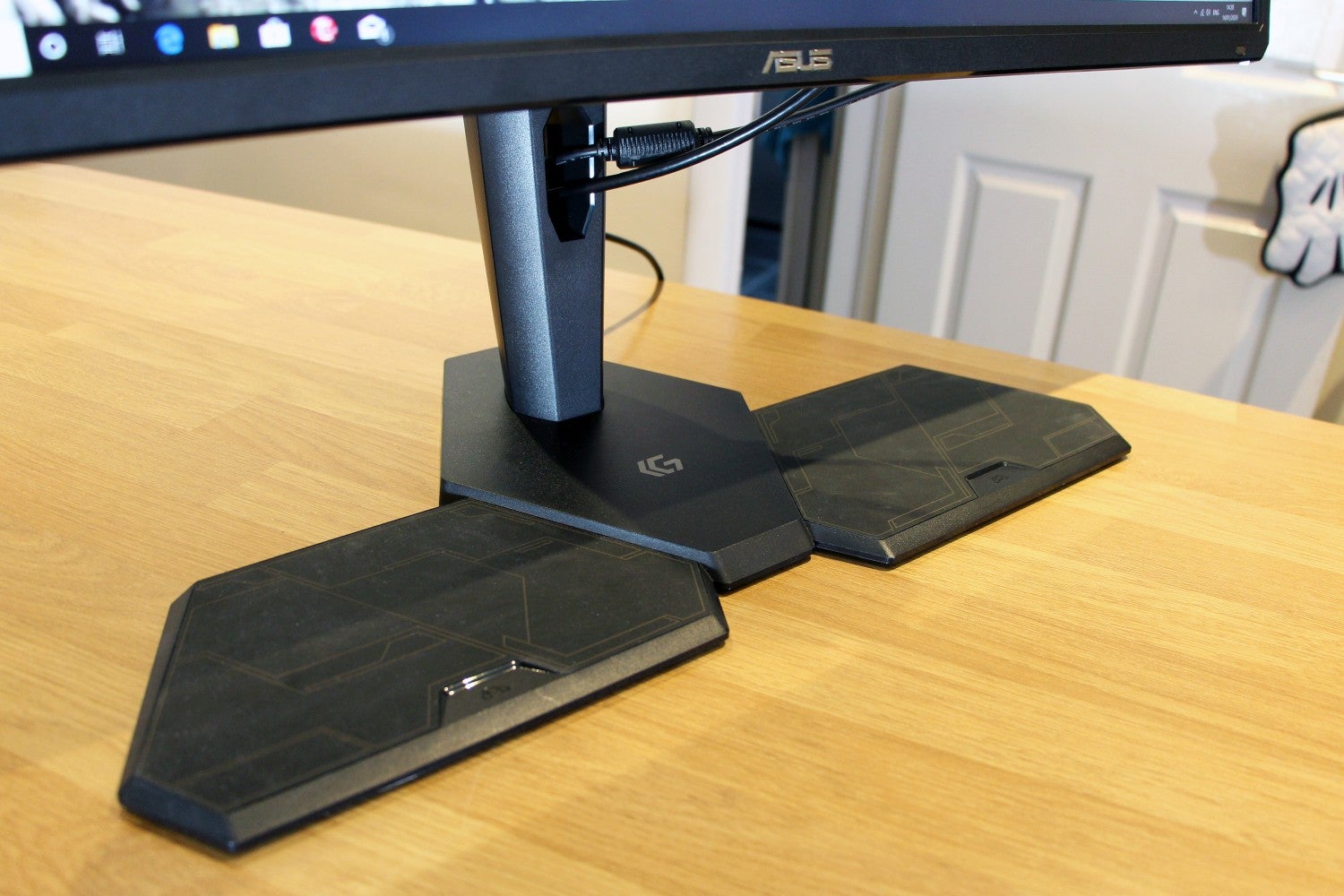 Uniformity is just about acceptable: the backlight loses 20% of its strength on the left-hand edge, but that high figure is masked by moving games and lower brightness levels.

Don’t bother with any of the screen modes, though: the Scenery option is very bright but lacks depth; Cinema mode has a red hue and is too noisy; and the RTS, RPG and FPS options are similar to the original Racing setting.

Should you buy the Asus CG32UQ?

The Asus CG32UQ is a good monitor, but it has some caveats that will restrict its appeal.

The 4K VA panel is excellent. It’s crisp, with huge contrast and good colours. DisplayHDR 600 gives games a boost, the speakers are powerful, and the design is good, offering plenty of USB ports, solid build quality and RGB LEDs.

However, the CG32UQ has a disappointing FreeSync implementation, and its size is an issue. It’s a large screen for PC gaming, but console players will find this panel far smaller than most TVs, and that precludes the Asus from being used across living rooms.

It’s price, too, is high. For that money, PC gamers can buy 32in 4K panels with IPS technology and with either 60Hz or 120Hz refresh rates – or faster screens with lesser resolutions. Console players can buy 4K, 60Hz TVs with HDR that are much larger.

It leaves the CG32UQ in a tricky spot. It’s a decent screen, but I’m just not sure that it will find a home outside of bedrooms, offices or the desktop because it just isn’t big enough for the living room.