What is the Asus Blue Cave?

The Asus Blue Cave is a dual-band Wi-Fi router that’s geared towards smart home owners with its support for Amazon Alexa and IFTTT. It also includes built-in Trend Micro anti-virus and network protection for greater peace of mind.

Under its stylish hood it houses an AC2600 dual-band Wi-Fi setup, with one 2.4GHz band and one 5GHz band, plus it has four Gigabit Ethernet ports for wired networking and a USB port for sharing storage. Priced at a premium compared to Asus’ own RT-AC86U, it’s this router’s design and smart home features that set it apart.

Unlike so many routers, the Asus Blue Cave is designed to be seen rather than hidden away. Its white exterior – matte round the sides, glossy on the front – measures 160 x 160 x 80mm and is punched through by a large, blue doughnut-shaped hole. It’s a fetching and intriguing design, which apparently has no performance benefits whatsoever. In fact, Asus has even talked about the challenges it faced in designing the product to work around its eponymous blue cave. 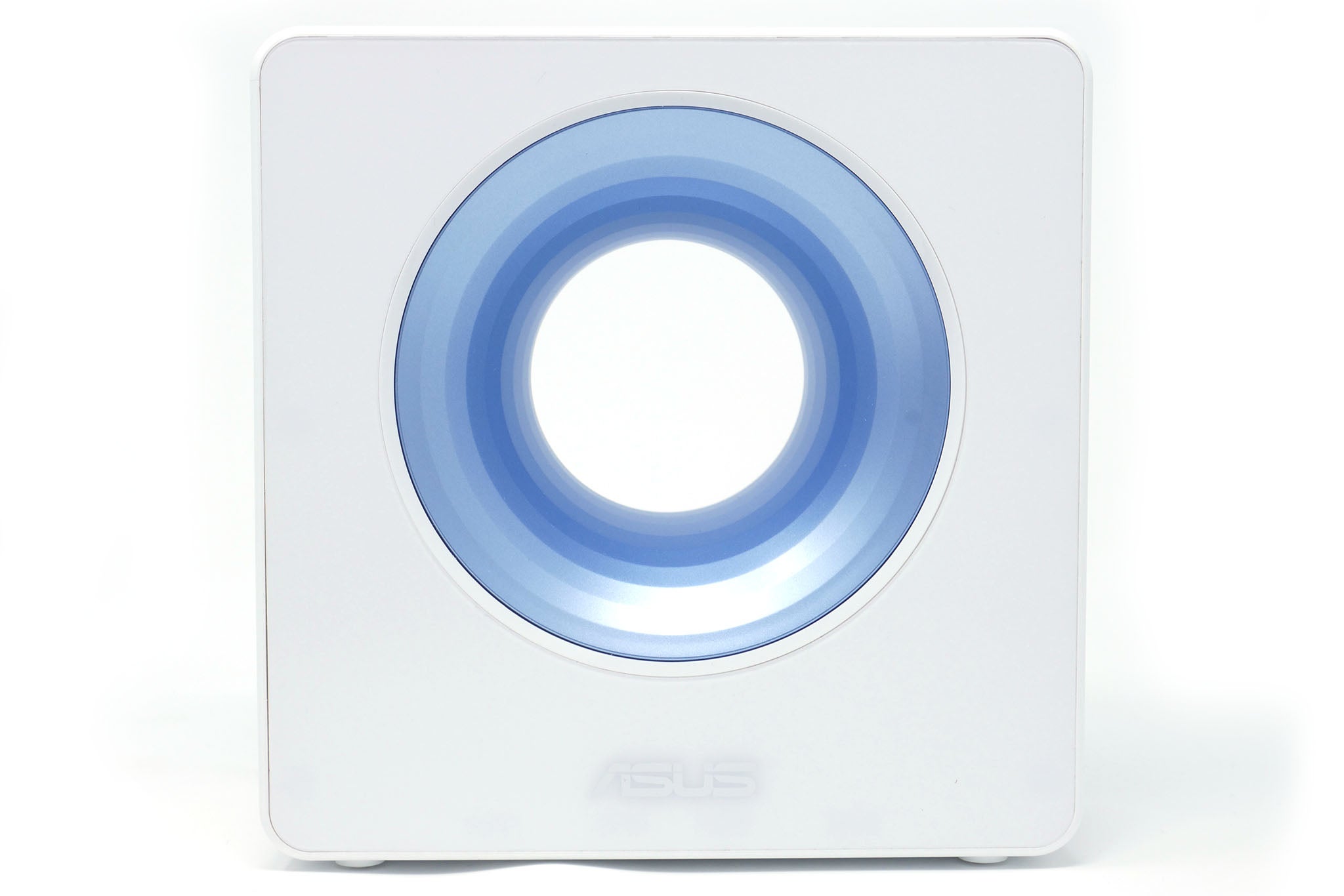 As well as its light blue metallic finish, the ring also pulses blue during setup and glows a solid blue once it’s functioning properly. There’s also a smaller indicator LED next to the Asus logo on the front.

Weighing 800g and with four little rubber feet on its base, the Blue Cave sits reassuringly steady, unlike most cheap routers. The ring also makes it really easy to pick up and move around.

Round the back is all the connectivity, which consists of four Gigabit Ethernet ports, a WAN port and one USB 3.0 port. Alongside these are the power button, power socket, reset button and WPS button. 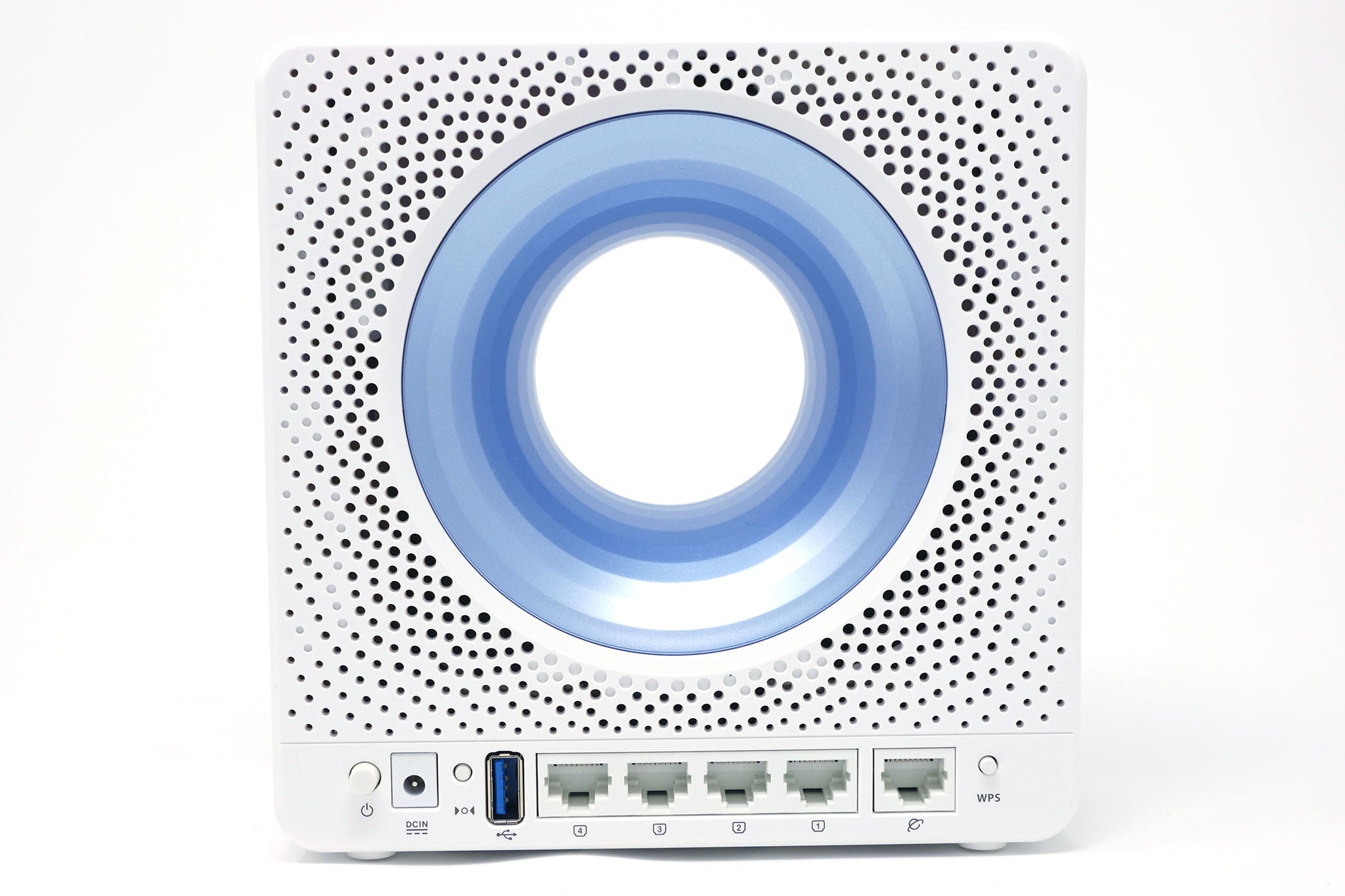 The USB port can be used, among other things, to connect a USB storage device or printer so that it can be shared on the network. USB storage devices can also be setup with Time Machine and made accessible from anywhere via the AiCloud feature.

On the inside of the Blue Cave you’ll find a 4×4 AC2600 Wi-Fi configuration that’s powered by an Intel 1.6GHz dual-core processor, 512MB of RAM and 128MB of flash memory. This hardware puts the Blue Cave well up there with modern routers in terms of Wi-Fi capability and speed, as you’d hope given its high price.

The Blue Cave can be set up either via Asus’ mobile app or through a conventional web interface. Whichever route you choose, it’s a simple enough process. The router will ask for a new admin name and password, names for the two Wi-Fi bands and then try and automatically connect to your internet connection. If it can’t do this automatically, it’s easy enough to manually pick the type of connection required. 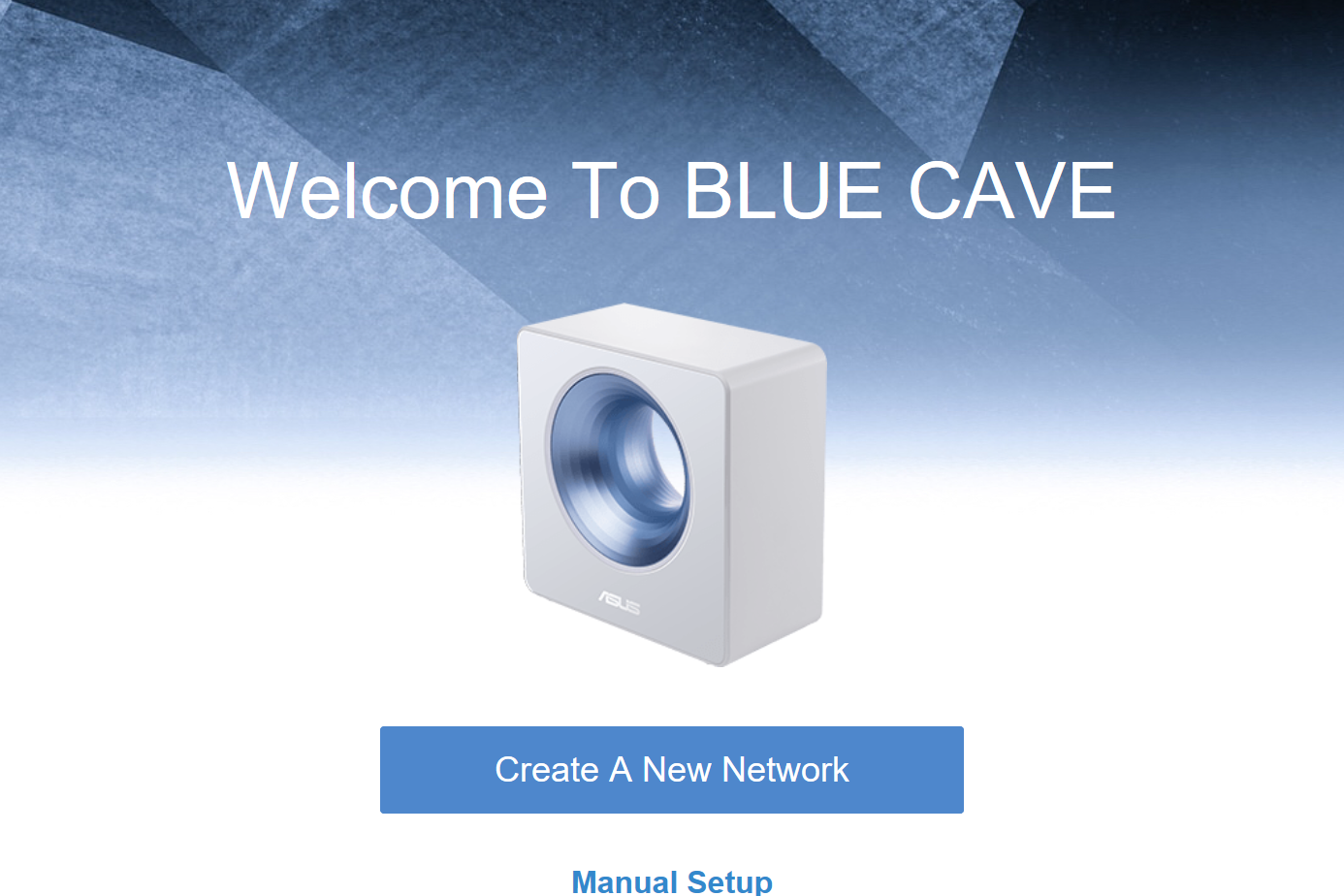 Like most routers, the Blue Cave doesn’t have a broadband modem so you’ll still need your existing ISP-provided router or modem to get your internet connection up and running.

Once configured, Asus’ web interface can be accessed to provide a plethora of options. In fact, considering this router is aimed more at the casual buyer rather than the enthusiast, a slightly more simplified menu – at least as the default – would seem the more sensible option. 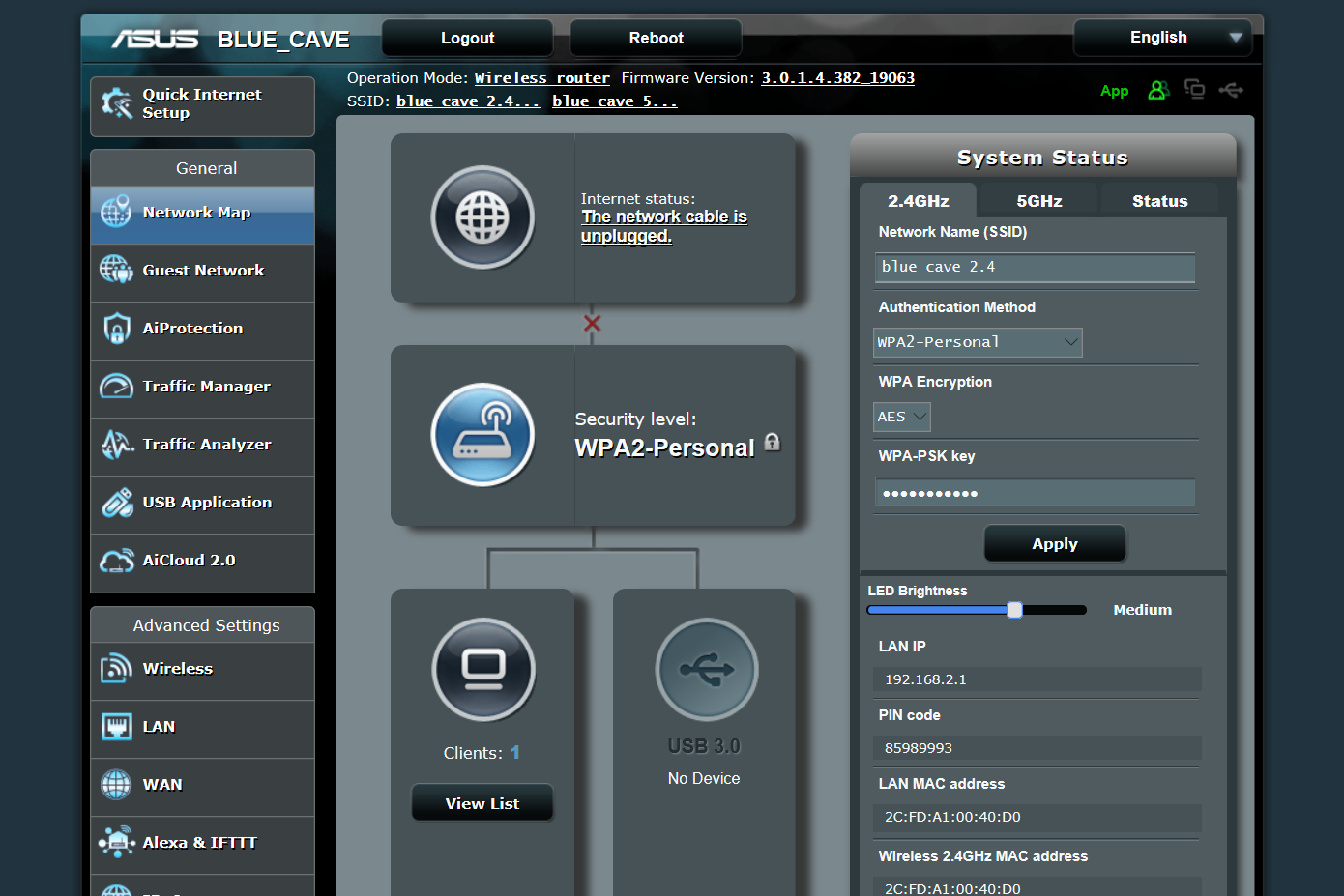 Regardless, what you do get is a menu down the left, a network map in the middle and a system status panel on the right. This shows CPU and RAM usage as well as providing quick access for configuring the Wi-Fi bands.

Other options in the General menu include Guest Network, AiProtection, Traffic Manager, Traffic Analyzer, USB Application and AiCloud 2.0. Below the General menu there are the advanced options that include separate sections for the Wi-Fi, LAN and WAN aspects of the router, along with an Alexa and IFTTT option and further menus for IPv6 support, VPN and firewall.

The guest network system lets you configure six different guest menus – three per band – so you can really fine-tune access for different users. Meanwhile AiProtection provides options for network protection and parental control. The former is powered by Trend Micro and looks to intercept malware, viruses and malicious websites before they even reach the rest of your network. 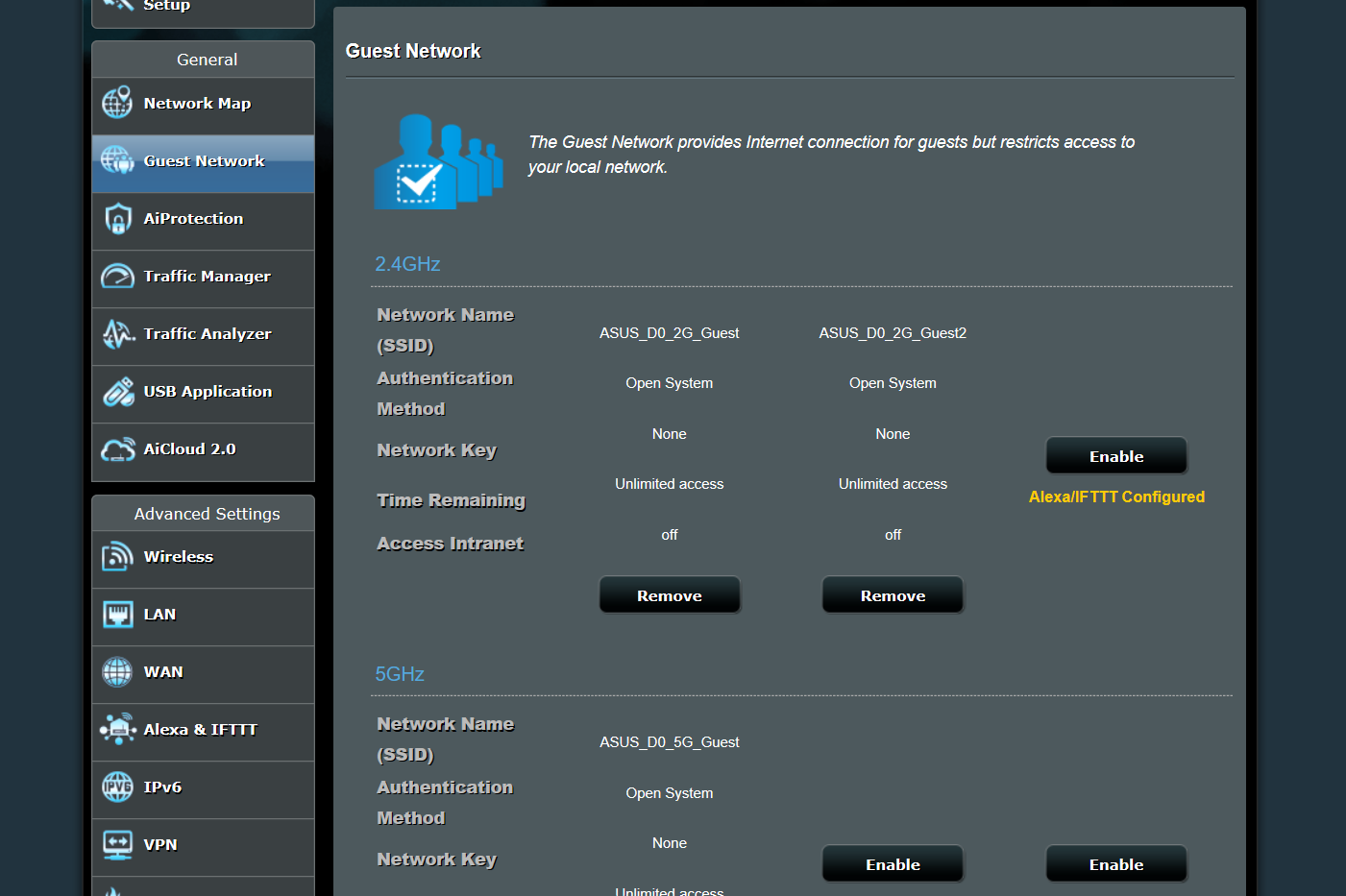 The Traffic Manager lets you prioritise network traffic for certain applications, ensuring your gaming traffic is put ahead of your downloads, for instance. Traffic Analyzer then lets you monitor what network traffic has been active when, making it easier to keep track of which client devices are hogging the network at certain times.

When it comes to USB support, Asus has by far the most comprehensive of any router company. This router’s single USB port can be used to share files from a USB storage device, make those same files accessible from the internet using AIDisk, you can share a printer, add Time Machine and even add a 3G/4G dongle so that you can get your internet connection from a mobile source.

Some of these features are clunkier than others but by and large they all work just as you’d hope and make for a great addition to this router – it’s just a shame there aren’t a few more USB ports so you can use more than one of the features at the same time. 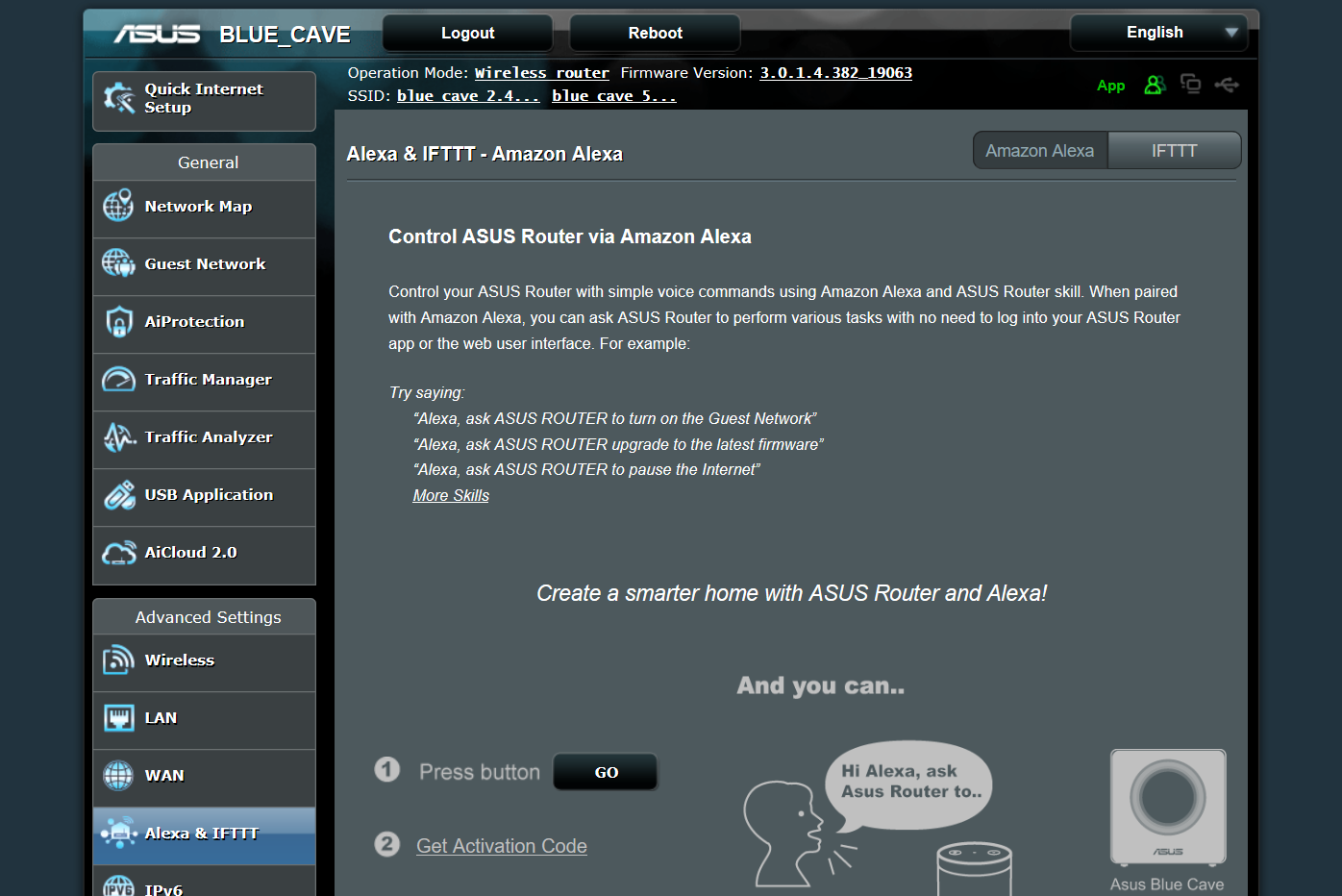 Of the options in the advanced menus, the main ones to note are the Alexa and IFTTT support. The former enables you to use voice commands to do things like pause the internet connection, enable a guest network or update the firmware.

With IFTTT you can create applets that trigger responses when the router detects something. So, for instance, you can get the router to fire off an email when a device connects to the network, or you can disable your wireless network when you go out and turn it back on when you return.

Both Alexa and IFTTT are nice additions that genuinely add key functionality to an existing smart home. They require a degree of effort to really make the most of but at least the option’s there.

With fairly powerful hardware under its hood, we’d expect solid performance from the Blue Cave, both close up and at range, and sure enough it largely delivers. However, it’s by no means the fastest router out there.

Testing at short range using the faster 5GHz band we measured an average speed 316.5Mbps. That’s plenty fast enough for most applications but other routers, such as the Netgear Orbi and Linksys Velop x1, do outclass it. 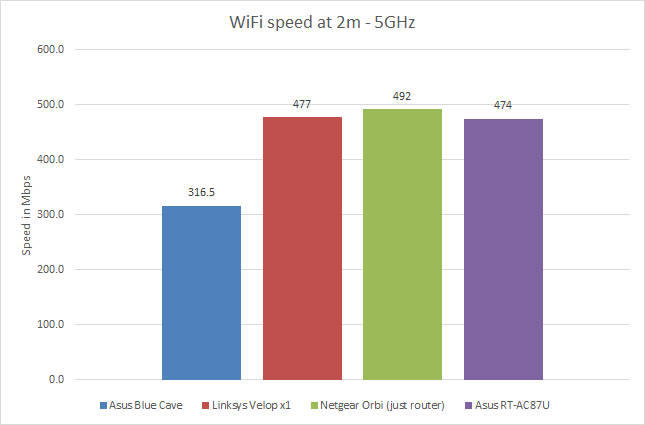 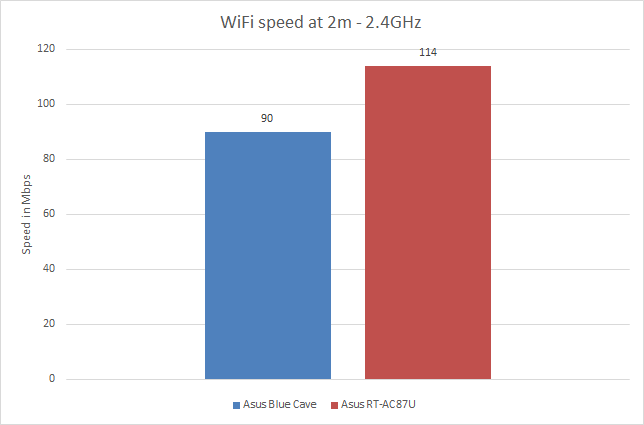 It’s a similar story using the 2.4GHz band where an average of 90Mbps falls behind the 100Mbps+ of some alternatives.

As for at longer range, the Blue Cave holds its own surprisingly well. With the router positioned on a ground floor in a three-storey house we take measurements at one floor up and then two floors up in two different rooms – one directly above the router (test two) and one that’s off to the side. 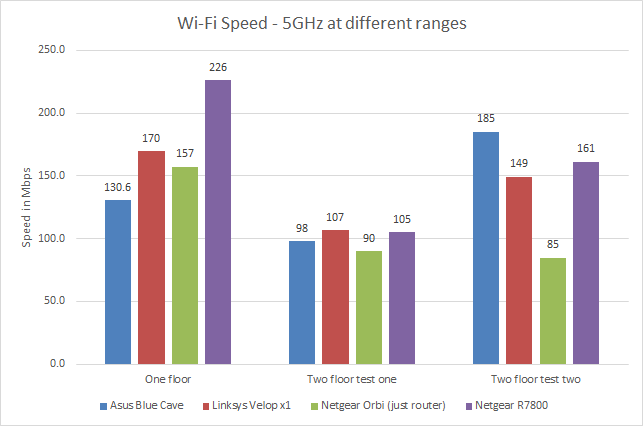 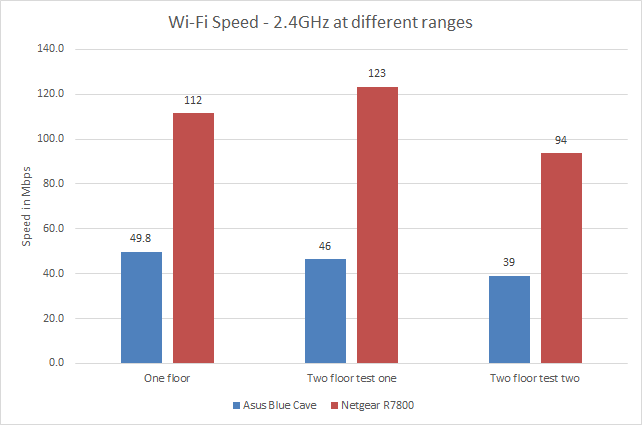 In the shorter first floor test the Blue Cave trails all the other routers we’ve compared it to but it then comes third in the most challenging second floor test and, bizarrely, tops our other second floor test. Crucially, in all our tests, the router provided entirely ample speed and reliability, even for things like HD video streaming.

Why buy the Asus Blue Cave?

The Asus Blue Cave isn’t the last word in router performance but it holds its own and should provide ample Wi-Fi coverage for fairly sizeable homes, and makes for a clear upgrade over most ISP-provided routers.

Its inclusion of Alexa and IFTTT support are good to see, although not unique, while AiProtection keeps your network safer too. A comprehensive list of other capabilities also mean this is a router that’s left wanting for very little.

Nonetheless, it lacks that special feature to truly make the Blue Cave a compelling purchase, given its high price.

Alexa and IFTTT support, along with Trend Micro-powered malware protection, make this a very capable router, but a pricey one.