When CrossFire was launched it required an external dongle to work with a master carfd. However, even though it’s barely even arrived it’s already changed. While X1800 master cards have yet to appea, according to ATI, the entry-level X1300 and mid-range X1600 cards won’t require a master card.


There is another component required – CrossFire ready motherboards. We’ve seen the DFI LanParty UT RDX200 CF-DR, but it didn’t live up to its expectations. However, it now looks like Asus has come to rescue with the A8R-MVP.


Specifications wise, the A8R-MVP is pretty basic compared to the DFI LanParty UT RDX200 CF-DR. Asus has changed the ATI Southbridge in favour for a chip from ULi and it seem to have done the trick as the review sample worked flawlessly in our benchmarks. However, as we only had two X850XT cards – one being a CrossFire Edition Master card – we decided to leave out most of the 3D tests and we will be returning to this board at a later date when we have more recent newer cards to test it with. 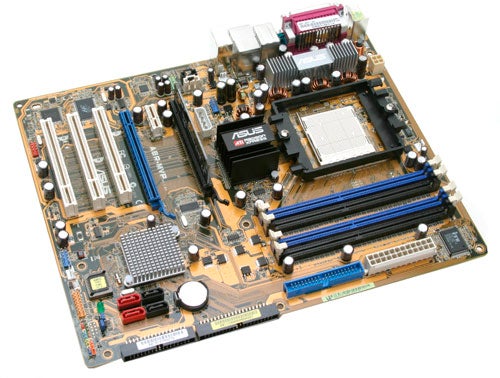 Let’s start with taking a closer look at what the A8R-MVP has on offer in terms of features. Although I said it is a pretty basic board, modern motherboards are rarely feature-free. The most important part of this board is of course the two x16 PCI Express slots, as this is what makes this a CrossFire board. As with the first generation of SLI boards, when both slots are in use each slot is allocated x8 bandwidth.


Rather than using a small PCB in a slot on the board to change between single and dual card mode, the A8R-MVP uses a small piece of PCB that slots in to the top slot. This disables this slot and transfers the bandwidth to the lower slot to make this a full x16 slot. It’s a simple solution but it works well. The downside is that you can’t use the slot at all in single card mode, something most SLI boards allows you to at reduced bandwidth. 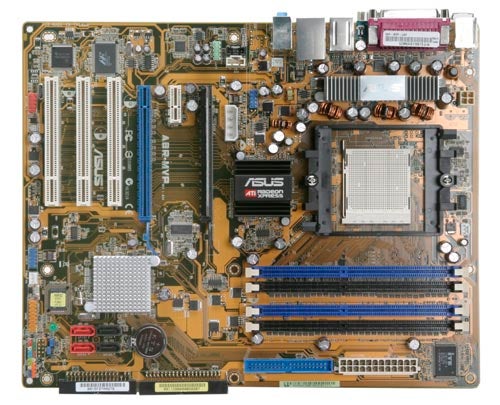 As you might have realised by now this also means that if you only use one graphics card with the A8R-MVP this ends up being in the middle of the board. This isn’t really a problem, just rather unusual for a modern PC, but then again the same is true for the Asus A8N32-SLI.


There is a further x1 PCI Express slot and three PCI slots for additional expansion cards. The four SATA connectors – with support for SATA II – support RAID 0, 1, 0+1, 5 and JBOD configurations thanks to the ULi southbridge. This also adds two IDE connectors for up to four drives.

Moving on to the rear of the motherboard you’ll find two PS/2 ports, a serial and parallel port, a coaxial S/PDIF, four USB 2.0 ports, a six pin FireWire connector, an RJ45 – for the onboard Gigabit Ethernet controller – and finally three audio jacks. The onboard audio codec support HD audio, but only for 5.1 rather than 7.1-channel sound. This is also the reason why there are only three audio connectors.


A further FireWire header is located at the bottom of the motherboard and a suitable rear bracket is supplied. There are also two spare USB headers and a bracket for two USB ports – leaving two spare for any case USB ports – alongside a game port fitted to another bracket. Apart from this you get four SATA data cables and two SATA power splitters which each support two drives. Finally, there are two IDE cables and a floppy cable in the box. 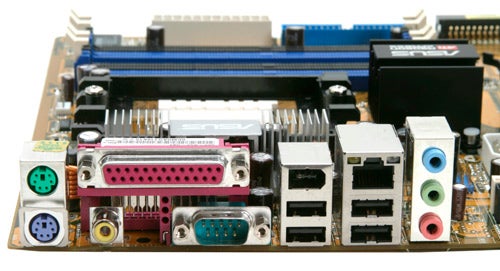 The board layout is quite clean and the power connectors are towards the top of the board. One small complaint is that beyond the CPU cooler there are only two fan headers, not great but then this is a low-cost board. The chipset is passively cooled – both the Northbridge and the Southbridge – alongside the MOSFETS.


So what about performance? Well, this isn’t the fastest board I have ever tested, but with an overall SYSMark 2004 score it beats the Asus A8N-SLI Premium by one point. This is within the margin of error and newer drivers might also make a difference here. In PCMark 2005 the A8R-MVP scored 4211 points overall compared to 4138 for the A8N-SLI Premium. Although this was with two 6800GTs in the A8N-SLI Premium which would be the reason for the slightly lower score as these cards are slower than the X850XT cards used in the A8R-MVP.


Either which way it goes to show that that ATI northbridge in combination with the ULi southbridge is a fast and stable combination and Asus has put together yet another solid motherboard. When you consider that it only costs £78.31 it’s pretty good value for money as well. The only question mark here is how good it is in 3D. 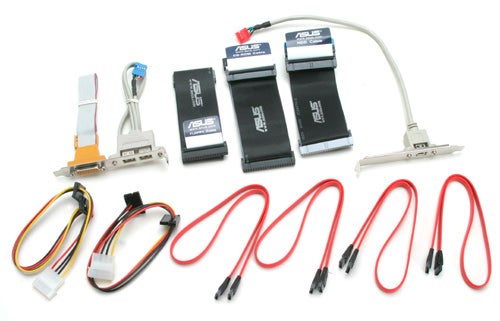 As I mentioned earlier on in the review, as we only had access to an X850XT CrossFire setup we felt it would be wrong to run a full set of numbers on this motherboard as it wouldn’t show the platform in its best light. However, CrossFire worked flawlessly during the whole testing procedure and a quick 3DMark 05 run produced a score of 6164 points, not exactly impressive. So once we’ve managed to secure a couple of more up to date CrossFire compatible cards we’ll revisit the A8R-MVP and do a full set of 3D tests.


Overall the A8R-MVP proved to be a solid motherboard and it shows that CrossFire might finally be ready to compete with SLI as a dual-graphics card solution. It’s not the feature richest board on the market, but considering the price it’s still good value for money.