Asus has been making laptops for several years now but only recently have its laptops have been sold under the Asus brand in this part of the world. The quality has also improved significantly over the years and the latest models can be compared with some of the more well known brand names. The A6Km-Q002H incorporates a lot of technology at an affordable price point, but can it compete with the big brand names? 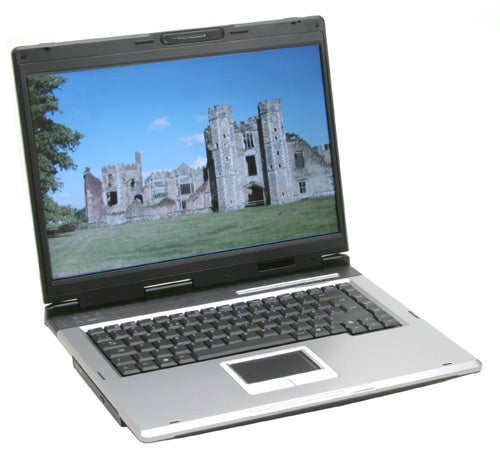 The processor in the A6Km-Q002H is an AMD Turion MT30 clocked at 1.6GHz. MT is the 25W version of the Turion which means this is AMD’s low power model. The Turion processors have yet to evolve to the 939 platform and as such they can only use single channel memory. The A6Km-Q002H comes pre-fitted with 512MB of PC2700 DDR memory and a spare slot is available for future upgrades.


Oddly enough Asus has paired the processor with a desktop chipset, namely the SiS 756. That said, it doesn’t seem like SiS has a mobile part with PCI Express support that doesn’t already have integrated graphics, which could explain the choice of chipset. Of course the downside of this is that the battery life will suffer to a degree, which makes me question the choice of the low power processor in the first place. 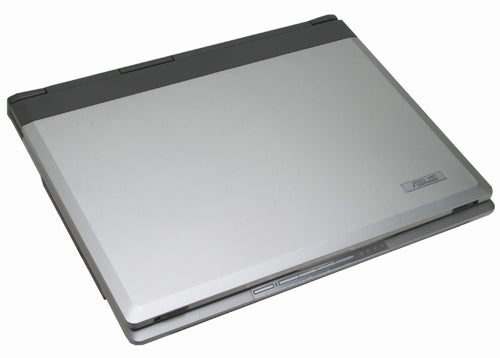 Another strange choice that Asus has made is the southbridge, which is the fairly old SiS 964L rather than a more up to date version. This means that you loose out some of the latest features like HD audio and Gigabit Ethernet. However, Asus has added a third party Gigabit Ethernet controller so at least part of the problem has been addressed.


Wireless connection options consist of an Asus 802.11g WiFi card – which also supports 802.11b networks – and a Toshiba Bluetooth adaptor. Asus supplies software for the wireless card to allow you to use the A6Km-Q002H as a WiFi router if need be. I’m not to keen on the Bluetooth software though – although it is better than some earlier applications it’s still more complicated than it has to be.

For some reason or another the A6K series of notebooks is listed under business models on Asus’ website, something I can’t quite get my head around. Even more confusing is the fact that the product text talks about “Total gaming power on the go” which I presume refers to the nVidia powered GeForce Go 7300 graphics chipset. This is the latest entry level graphics chipset from nVidia for notebooks and will replace the GeForce Go 6200 with time. What it shares with the 6200 is that it too uses Turbo Cache – this means that it only has a small amount of video memory – in this case 32MB. If the chipset needs more memory it takes it from system memory – this particular chipset can address up to 256MB. 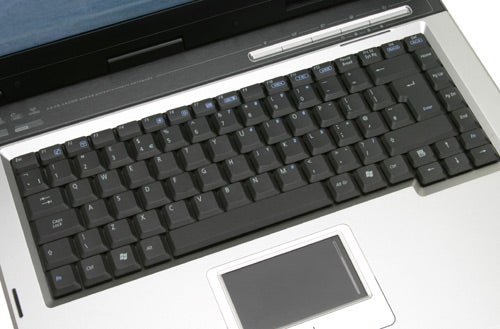 The display is a glossy type 15.4in widescreen model with a native resolution of 1,280 x 800. Not the best money can buy, but adequate. A complaint on the review sample would be that the backlight of the LCD was very uneven, so parts of the screen were darker than others. The backlight can be switched off, which is something of a novel feature, but it could save some battery life if you’re not using the screen for a few minutes.


The hard drive in the review unit was 80GB, although the models on sale in the UK seem to ship with 60GB drives. The optical drive comes from Samsung and writes to DVD+/-R media at 8x DVD+/-RW media at 4x and DVD+R dual layer at 2.4x. 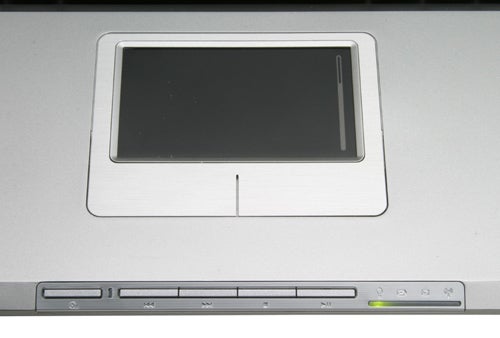 Looking around the sides of the notebook the left side is dominated by the optical drive and has no ports at all. The rear of the A6Km-Q002H is home to the power connector, a D-SUB port, the parallel port and four USB 2.0 ports. Finally on the right hand side is where you find the modem and Ethernet ports, S-Video out, a headphone socket that doubles as optical S/PDIF out, a microphone and line in socket, a four pin FireWire connector and an IrDA port. This is also were the PC Card slot is located – a single Type II slot. Just above the PC Card slot is a memory card slot that accepts SD, MMC and MemoryStick cards. 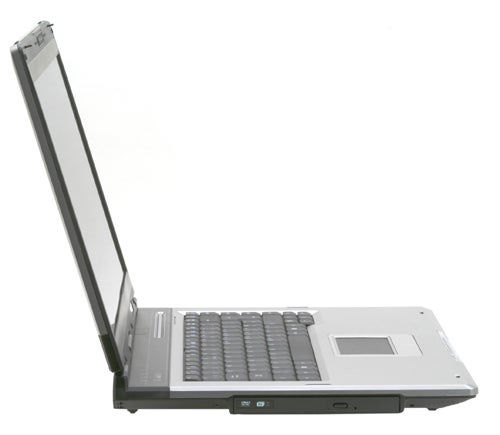 The keyboard is generally very good, but the Fn key has got the corner spot once again – something of a pet hate I have. The touchpad is also good and it’s big and square, rather than some of the odd shapes that have cropped up on some recent laptops. Below the touchpad is a set of multimedia buttons with which you can playback CDs while the notebook is switched off. You can also control Windows Media Player with the same buttons within Windows.


Just above the keyboard is the power switch, a button that allows you to disable the touchpad – especially handy in this case as the A6Km-Q002H comes with a two button optical mouse with scroll wheel – a shortcut button for your web browser and email software and finally a button that controls the Power4 Gear software. 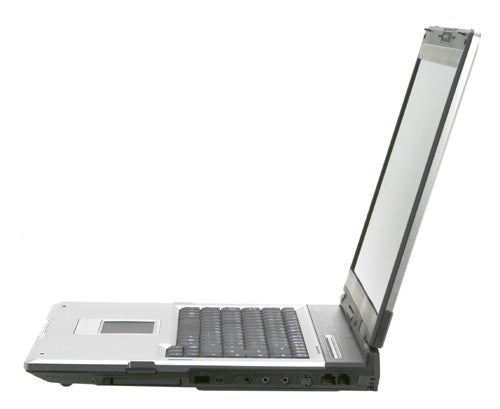 Normally there isn’t anything above the screen on a laptop apart from the locking latches for the lid, but the A6Km-Q002H actually has two features here. The first one is a 1.3Mpixel web camera – video is still limited to 640 x 480, but on the whole this is pretty good. Unfortunately the camera can’t be rotated, so you’ll have a hard time shooting anything other than yourself. Next to the web camera is the microphone which is labelled high quality voice recorder. It is good enough to be used and placing it here means it will pick up less noise from the keyboard if you use it at the same time, but you do have to speak up for it record your voice properly. But the really cool thing here is the screen saver – yes you read that correctly – as it uses the integrated camera and mixes the video input into the very flashy screen saver.

In the performance side of things the A6Km-Q002H is not what you’d call a speed demon. With an overall SYSMark 2002 score of 183 it will perform everyday office tasks without a problem, but it is definitely not up there with the latest Pentium M processor based notebooks. With two hours and 14 minutes battery life in MobileMark 2005 it has some catching up to do to become a business machine, as this just isn’t good enough for mobile business users. The DVD playback test only lasted two hours and five minutes, not exactly impressive either. 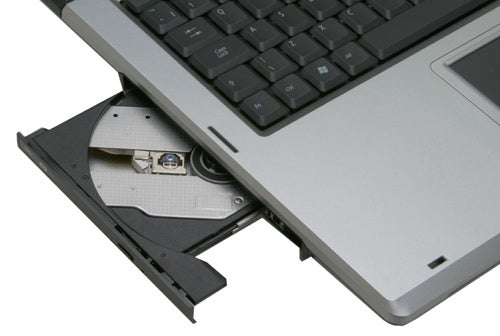 The 3D results are actually not that bad and the A6Km-Q002H managed 31.01fps in our FarCry time demo. However, our review samples kept crashing every time Half-Life 2 was launched. The 3DMark03 score was fairly poor at 3233 but on the other hand the 3DMark05 score of 1451 is actually faster than some GeForce Go 6600 setups we’ve seen – all tests run at 1,024 x 768 with no image quality settings enabled.


At £824 inc VAT the Asus A6Km-Q002H ends up in the affordable section of the market – it is something of an all rounder, but it doesn’t excel in any way. Don’t get me wrong, it’s not a bad laptop, it’s just that there are so many other machines out there that offer similar features and performance for the same money or less.


The Asus A6Km-Q002H is a averagely specified notebook with a reasonable price and average performance, but it doesn’t have anything that really sets it apart from the competition.