Is anyone else out there old enough to remember the early days of Mastertronic, Codemasters, Firebird and the other 8-bit budget software houses? At their best, they provided decent games at pocket money prices. You knew you weren’t getting an A-List title, but that was fine – you couldn’t expect Knight Lore for £2, but you could expect something that would suck up a few dull hours and give you an enjoyable run. 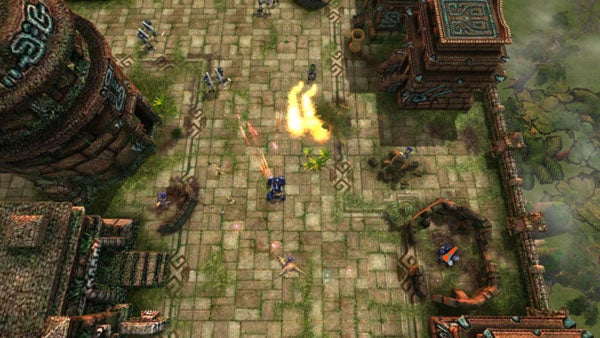 In a way, the various download stores like Xbox Live Arcade, PSN Store and – where relevant – Steam, are doing the same thing. You pay your ￡5 to ￡7 knowing that you’re not going to get the next Gears of War or Uncharted, but you hope you’ll get something simple, easy on the eye and fun. Assault Heroes 2 fits the bill almost perfectly. Unpretentious, lacking in ‘wow’ factor and not at all revolutionary, it’s still a cracker of a game for the cash. 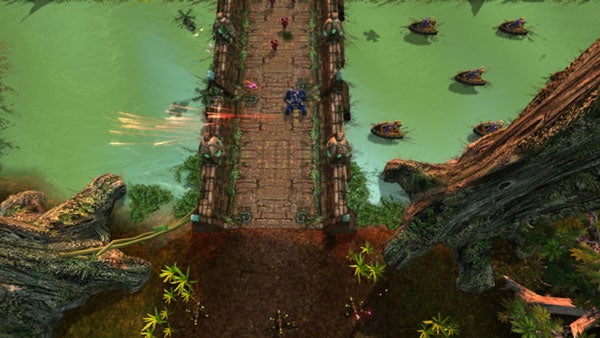 Those of you who played the original Assault Heroes last year will know roughly what to expect: a scrolling, twin-stick 2D shoot-em-up that brings to mind old 8-bit classics like Ikari Warriors and Commando. The plot is practically non-existent. Last year’s badass has been beaten, a bigger badass is back for more, and it’s up to you to send him and his armies packing. To do so you have a Warthog-style armoured assault vehicle, but you can also pop out on foot and take over waiting tanks, helicopters or cannon-packing mechs. Make your way through each level, shoot anything that shoots at you, beat the boss, then go onto the next. If you want classic arcade action, no frills, this is it. 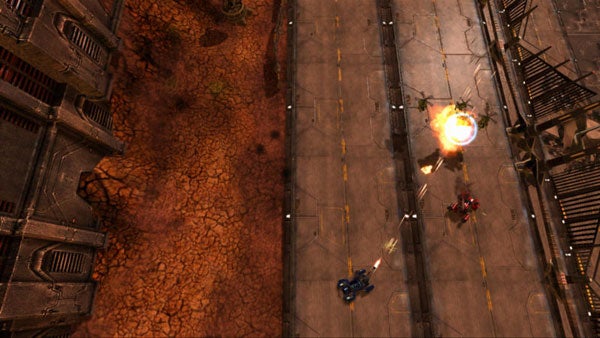 Now, I didn’t play a lot of the original, but to my mind this is definitely the better game. It looks sharper, with cleaner textures, more atmospheric lighting, more detail and some fine vehicle and enemy design. You couldn’t say that Assault Heroes 2 was exactly gobsmacking – it looks a lot like an HD version of a first-generation Xbox game – but it’s certainly not an ugly piece of work, and some of the bosses are terrific. It also helps that the game tends to stick to a high, zoomed-out vantage point; when your enemies are many and each only a few pixels high, you’re more focused on filling them with lead than checking out the relatively low-polygon models.

It’s also nice to see a game go so big on destructible scenery. Barracks, guard towers, trees, temples, and all number of enemy installations can all be blown into lovely jagged chunks. Combine this with an arsenal of miniguns, missile launchers, freeze-weapons and flamethrowers, and there’s a lot of destruction on the screen. I’m still not quite sure I can say that this is yesterday’s game remade with today’s technology, but Assault Heroes 2 is a good example of how to make an old arcade genre feel more up to date. 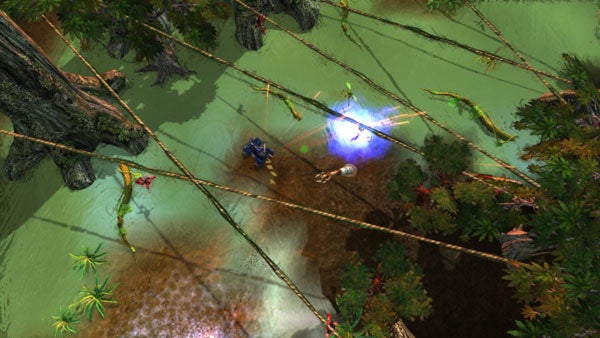 The next thing that hits you is that this is a slicker, more enjoyably paced title than its predecessor. Assault Heroes 2 throws on waves of grunts like there’s no tomorrow, but it also knows when to slip in tanks and helicopters, exploding kamikaze goons, and a variety of shock troopers. It’s better at setting up set-piece battles than a lot of full-priced FPS games I could mention, and it’s not afraid to use the landscape to create choke-points and do-or-die arenas of wanton destruction. As the early snowscapes give way to pseudo-Aztec Jungle settings and gloomy red sci-fi scenery the game trickles in new enemy types, new machines to drive and new challenges. There are even occasions when you’re forced to proceed on foot, or where you can opt to leave the main path and hack your way through terrifyingly tight sub-levels – it’s a bit like using a warp pipe in a Mario game.


Best of all, Assault Heroes 2 features some of the finest boss battles I’ve enjoyed in ages. They’re imaginative, impressive and challenging, but not so challenging that they’ll hold you up for more than a few tries. The giant alien whale near the start is a particular goody, rearing up spectacularly from the river bed to spit up troops or laser you to death, but those that follow have more than their fair share of memorable moments without providing insurmountable barriers to progress. 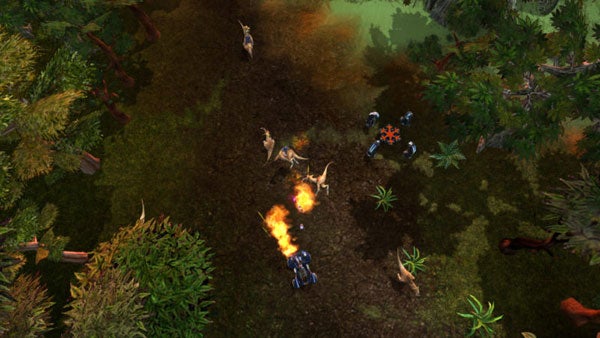 In fact, difficulty is a key strength with Assault Heroes 2. One of the few problems with recent Xbox Live Arcade shooters such as Ikaruga or Omega Five has been that they demanded real dedication; if you weren’t prepared to put in the hours and improve your skills, then there was no way you were going to see even halfway through the game. Not so with Assault Heroes 2. I think that most of us could dial the game down to Easy and muddle through to victory, while the Medium level is a solid challenge, but not dispiritingly hard. Frankly, having sweated to bring you reviews of the aforementioned titles, Assault Heroes 2 came as a nice relief.

An excellent game with one player, it’s an even better one with two. Co-op play on Xbox Live is a given, but this is one of those games where it’s more fun played with a mate on the sofa – partly because it’s easy to chide someone when they fail to keep up if they’re only a few feet away. 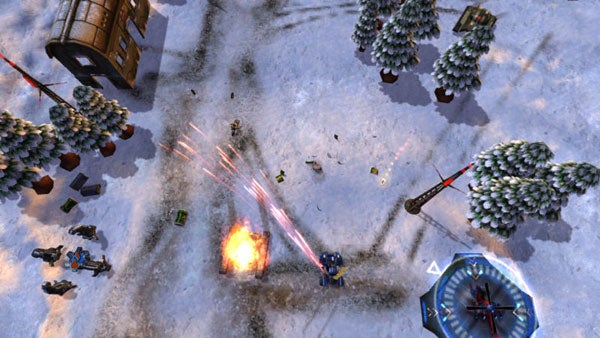 Overall, I’m left rather short on things to complain about. I’m sure I could moan about the dumb enemy AI and the slightly monotonous nature of all that blasting, or about the fact that a few of the weapons lack punch, but I’m not really all that inclined to. Assault Heroes 2 is what it is – a big, dumb, lovable, old-school scrolling shooter – and what some might call monotonous, I’d call hypnotic. Whack it on, turn up the volume, hear the driving retro score and the bombastic sound effects, and just enjoy. 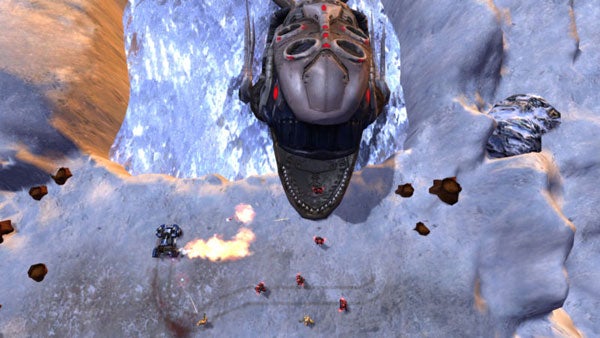 OK, so there’s no way you could confuse Assault Heroes 2 for a big budget, Triple-A title from a major developer. Nor is it long enough to keep you going for more than a wet afternoon or two. Is there any point at which it feels particularly new, different, innovative or likely to change the way you feel about games? Nope. It does, however, do what the best of the old budget titles did: it gives you a few hours of great entertainment without doing any major damage to your wallet. If that sounds good, download the trial then buy the full game with confidence. As we used to say back in the 8-bit days, it’s skill.


One of the most accessible and enjoyable action games on Live Arcade, and a must if you fancy a break for a quick, cheap blast.