Assassin’s Creed Origins’ next DLC comes in the form of Curse Of The Pharaohs, a pretty hefty expansion which not only boosts the level cap up 10 levels to 55, but also introduces new areas such as The Valley Of The Kings. If you’re just here to learn that this is more of the same, then good. It is. If you loved Origins, you’ll be well in your element as soon as you sit down with this next month. Ubisoft has crafted this very much with the rest of the game in mind.

For those who need more, however, there are further elements to get into, namely the aforementioned setting. Whereas the base game saw Bayek mostly playing around in Egypt and its built up ways, Curse Of The Pharaohs introduces environments that are far more desolate and barren.

The Valley Of The Kings especially feels like a giant wall of sand, but that’s why it’s so fascinating to explore. It’s almost intimidating given that you’re often met with huge mountain sides that are surrounded by vast emptiness, and if you were hoping this would have a different atmosphere to Origins then you’re also in luck. It most definitely does and gives off the impression you’re stumbling into new, untouched territory.

Curse Of The Pharaohs also goes fully into what many of us think about when Egypt is mentioned, and the clue is in the title. While there is a ton to do here and seemingly will keep you busy for hours, the main story revolves around Bayek trying to both locate and return an ancient artefact to its rightful place in order to restore peace to the region. Currently mythological beasts and long-dead monarchs are on the loose with bad intentions, namely trying to stab you in the face. 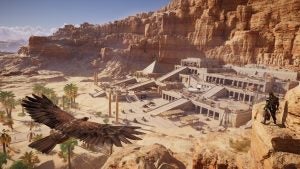 It’s intriguing to work through, though, because the majority of this narrative plays out almost like you’re a detective. Each new clue will lead to a different character who’s ready to play their part or a new area to jump around, and Ubisoft has gone out of its way to ensure it doesn’t fall into an expected pattern. While there are still plenty of opportunities to stab people in the chest and, of course, climb over rooftops like a loon, you’ll also be asked to investigate murder scenes, and complete rituals in order to cleanse the demons of the past.

It’s a nice touch, because it ties into what Origins is all about, or at least what most people would want when you’re dealing with ancient Egypt. You’ll even get to tangle with mummies, Anubis warriors and scorpios, all of which you’ll probably be familiar with if you’re super into mythology. If nothing else, it’s just a nice touch to have new enemy types.

While all this window dressing works well, it’s only fair to reiterate that you’ll still be going through the Assassin’s Creed motions you’re used to. This is without doubt an extension rather than an attempt to toy with the template, designed to offer extra content for those who have exhausted the main game but are still looking for more.

That means it does come with some of the same issues, especially in terms of boss fights. One towards the end of the main quest is particularly frustrating, as you need twitch-precision skills to best it. But if you’ve played Origins that probably won’t overly surprise you. It just, potentially, would’ve been better to tackle this in a different way to allow Curse Of The Pharaohs to stand out, but, essentially, that’s what the rest of the DLC is for. 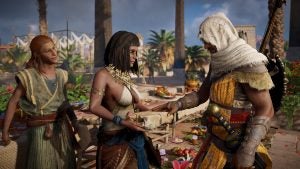 There does seem to be a huge amount of side missions and quests to do outside the main story, meaning you should be distracted for some time, and there are new abilities to unlock to boot. If you’ve been waiting for something to come along to prolong your Egyptian adventure, this, on paper, is definitely it.

It’ll be interesting to see how the experience comes together in a few weeks, but for now know that, yes, this is more Assassin’s Creed Origins, and no, that’s not a bad thing. As long as you were into it last year, of course.