There was one gap in the original Assassin’s Creed that its free-running hero could never make it over: the gap between our expectations and the reality of the game. It’s hard to remember after such a savage backlash, but some aspects of the game were magnificent. The visuals? Undeniably stunning. The recreation of the Holy Land, and of the architecture of Jerusalem and Acre? Incredible. The environment-sensitive, realistic animation? Only bettered by Uncharted and its sequel.

And while not everyone liked the controls – the game practically plays itself is one complaint I’ve heard – they certainly produced a fluid experience of climbing and free-running that made clambering up walls and towers a pleasure, not a chore. Having spent some time this week playing Pandemic’s dumb but fun The Saboteur, I can’t tell you how much Altair’s swift, easy climbing and jumping is missed when it’s not there. 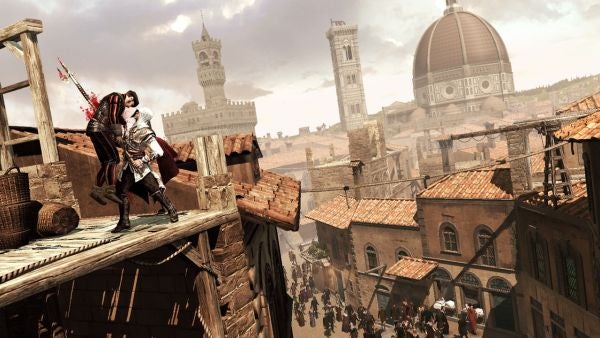 But then you get to the gameplay. The endless repetition. The creaky assassination missions. The tedious pick-pocketing, spying, menacing activities. The boring, frustrating combat. The spectacularly uninvolving modern day framing story. And let’s not forget such golden memories as “You dirty thief, I’ll have your hand for that.” I loved the first two hours, enjoyed the next three, then got progressively less interested as time went on.

Frankly, I wasn’t that excited about this sequel.

Here’s the surprise, then. Assassin’s Creed II is almost the opposite experience of Assassin’s Creed. It starts off looking and feeling like more of the same, hitting you straight up with the continuing adventures of Altair’s modern descendent, Desmond, and the mysterious organization Abstergo – the present incarnation of the Knights Templar. 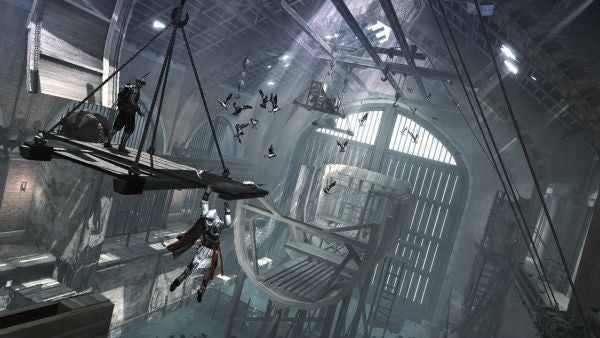 Fairly quickly Desmond finds himself back in the Animus – the machine that enables him (and us) to relive the experiences of his assassin ancestors – and in the shoes of Ezio Auditore, the young son of a Florentine banking dynasty at the height of the Renaissance.

The depiction of the city is, as you might expect, breath-taking, the game capturing the stonework and tiled roofs we still flock to today with a painterly eye for light and detail. The behaviour of crowds and the general sense of a living world is an improvement on the original. Yet the gameplay still feels – in these early stages – uninspired. For the first hour we’re back in tutorial territory, so it’s fetch quests, simple fights and scavenger hunts all the way. What’s more, the game’s biggest flaw – the tendency of the intelligent controls to decide that you want to do something other than what you intended – rears its head pretty soon.

That’s the bad news over, because if Assassin’s Creed II starts off being merely okay, it gets better and better and better the more you play. Ubisoft Montreal has done a great job of tightening up the core game mechanics, and an even better job of developing a structure that really works, pulling you more and more into the game as time goes on. 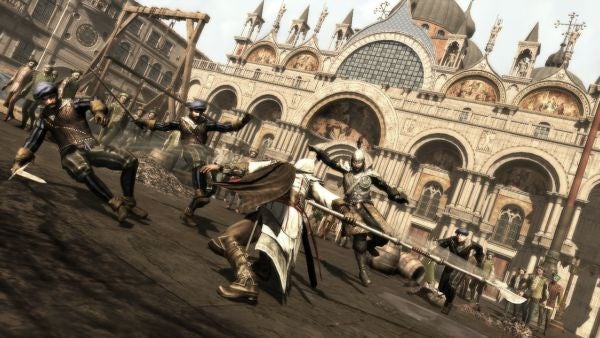 The free-running, for example, works much as it did in the first game, but now the environment seems better tuned for it, making a race across the Florentine rooftops a really fluid, exhilarating experience. Combat, meanwhile, seems to have been tweaked to make countering easier and ensure that you can take on more men without hitting a nasty end.


It’s easier to hide yourself in groups and so evade the notice of the local guards, while prostitutes can now be hired to mask your activities and distract your enemies from their posts. Assassin’s Creed was always at its best when it gave you an interesting challenge and a solid set of tools, then let you get on and do it your way. In Assassin’s Creed II your tools are more numerous and effective, and there’s always more than one way to skin a cat (or introduce some weasely Florentine merchant to his innards). 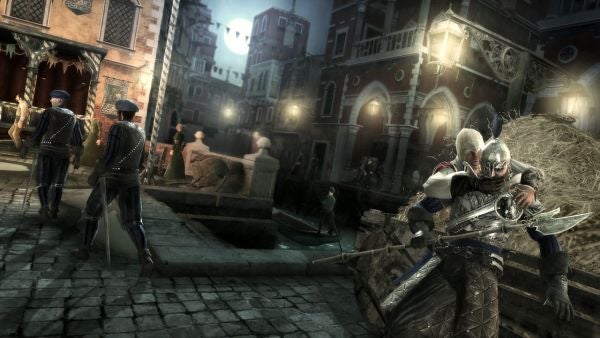 Better still, the sequel has found the right balance between freeform, open-world gameplay and an engaging mission structure. There’s no more of the ‘fulfil these four tasks then kill this bloke’ malarkey. Instead, you’re given a string of missions that build up towards the next major beat of the story, and the gameplay feels a lot more varied and interesting as a result.


One minute you’re sneaking up the Palazzo Vecchio to visit your imprisoned father, the next you’re escaping the scene of treachery, infiltrating a secret meeting or enacting the next stage of your bloody revenge. As in all the best games, it’s not so much that the core experience is always changing – climbing, free-running, stealth and combat remain to the fore throughout – but that there’s always some new twist, and a sense that your skills are being added to, pushed and tested.

At its best, Assassin’s Creed II does what the original rarely managed: it makes you feel like a slick, medieval super-hero, flying across those iconic Tuscan rooftops, hurtling from a balcony, diving on your victim and administering the coup-de-grace, all in one fluid stream of motion.


Of course, there are still side missions. There are hitman missions you can take, chests to rifle, feathers to gather, posters to deface, officials to murder, pockets to pick and pages of a mysterious codex to collect, amongst other tasks. But while all these activities are beneficial, they no longer feel like the meat of the game. The plot no longer feels like a means to justify a set of side-quests, but the engine that moves the whole game on its tracks. 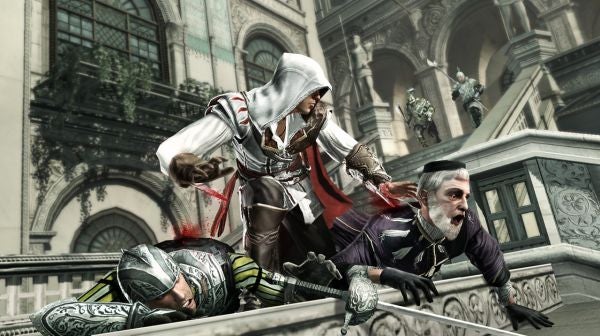 And what an engaging plot it is. For a start, Ezio is a more likeable hero than Altair. He’s more charming, more human, cheekier and even more romantic. He’s the second best dashing rogue we’ve had this year (Nathan Drake retains a fairly comfortable first place).


What’s more, Like the best historical thrillers, Assassin’s Creed II weaves together real people and events – Lorenzo de Medici, the Pazzi conspiracy, papal shenanigans and the Knights Templar – with fiction to create something that, while barely plausible, is consistently entertaining. Even the modern-day stuff, all very Dan Brown-esque, works a lot better this time around. 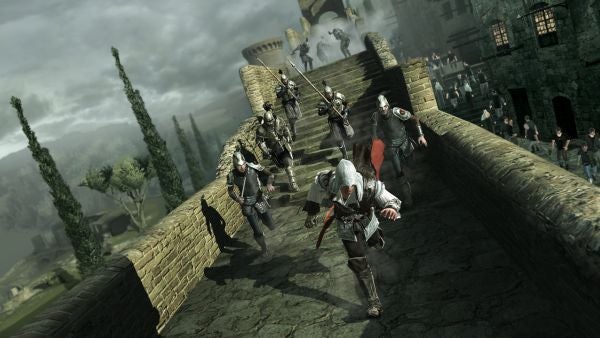 As the action moves from Florence to the Tuscan countryside to Venice, it’s hard not to get hooked in the conspiracies, counter-conspiracies and sudden, violent twists. True, the game’s depiction of Leonardo da Vinci won’t please most scholars. Sure, playing Assassin’s Creed II won’t make you an expert on Renaissance Italy any more than reading The Three Musketeers will make you an expert on 17th Century Anglo-French politics. All the same, as long as there’s enough blood, thunder, action and romance, a dashing hero, some swaggering villains and a cast of likeable personalities, who cares?


The settings help, too. With Florence and Venice, plus chunks of Tuscany and a taste of Rome, Ubisoft has some of the most attractive locations in the world to work with, and there’s something about scaling the Duomo or infiltrating the Doge’s palace that adds to the whole experience.

In a way, this is virtual tourism at its best, though a more bloodthirsty Grand Tour than most culture vultures (bar Hannibal Lecter) would have in mind. It’s also great to see missions that make the most of these environments, with one where you eliminate archers on the streets and rooftops as a gondola crawls through the Venetian canals a real stand-out.


Beyond killing and clambering and following the latest twist of the plot, the game has a couple of other hooks to keep you going. Firstly, a previous occupant of the Animus had left his mark on the game world in the form of glyphs; weird diagrams that Ezio can read in the past, and that can then be interpreted by Desmond’s new assassin colleagues in the future. These give you further glimpses into the back-story, complete with a weird video that slowly unfolds the more you collect. If you like your Da Vinci code claptrap, you’ll love this.


Secondly, with the end of the game’s first act Ezio gets his own Tuscan hill-town to govern, and money earned through assassination can be spent on upgrading its facilities and making it a nicer place to live (and a cheaper place to buy arms, armour and supplies). To be honest, the last is a little bit wasted – once you reach Venice there’s not really much compulsion to go back, but it shows how far Ubisoft has gone this time to ensure that AC2 has real depth. 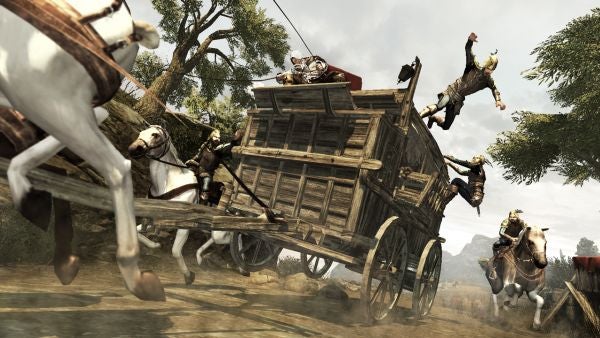 I’ll admit that there are still times when – like an episode of Neighbours – the scenery shakes to remind you that it’s all not real. You’ll see guards who fail to react to a comrade getting murdered nearby, or chuckle as nobody in a crowded square responds to the sight of a man diving hundreds of feet into a haystack.


You’re guaranteed to witness at least once chase that descends into a knockabout farce, your quarry waiting for you to catch up while you continually fluff a simple jump. The oft-repeated background dialogue is back as well, though much less obtrusively and annoyingly this time around. Some of these issues, I suspect, will only be resolved when Ubisoft has sufficient hardware to realise the extent of its ambition.


A storming historical thriller that comprehensively deals with the weaknesses of its disappointing forebear. Not quite a renaissance masterpiece, but very, very close.