In the games world first impressions count, and few games have made such a dazzling first impression as Assassin’s Creed. It’s the sort of game that’s guaranteed to look good in a trailer or a games conference show-reel; the sort of game that runs so thick with astonishing visuals and the promise of advanced features that even the most cynical games journalist would find it hard not to get caught up in the hype. But now, after eighteen months or so of “will it be great, won’t it be great” hysteria we have an answer. Assassin’s Creed is everything you ever dreamed it would be, 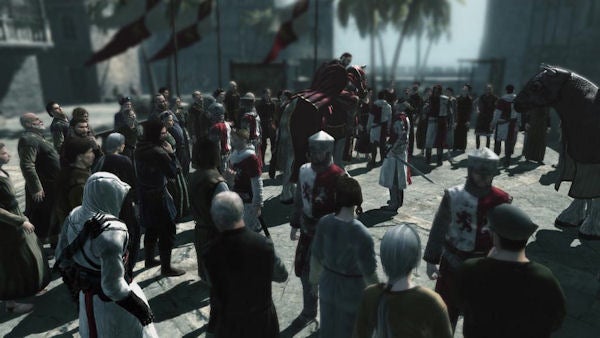 This is a title of monumental ambition, and in some respects monumental achievements. The graphics really are quite unbelievable. Post Ghost Recon and Gears of War we’re getting harder to please with sub-bleached HDR and gritty textures, but there’s something so coherent about the way Ubisoft’s game renders its Medieval, Middle-Eastern world that makes it utterly gorgeous and utterly believable. I know precious little about the Crusades bar what I’ve seen in films like Kingdom of Heaven, but the game certainly captures something fascinating and distinctive about the period that looks and feels totally right. 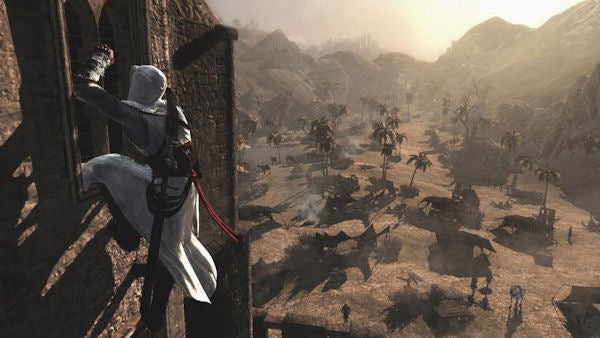 The animation, too, is fantastic, with our hooded hero, Altair, upping the ante on his predecessor – the Prince of Persia – with a series of acrobatic moves that flow neatly into one another with nary a glitch. Whether he’s free-running over the rooftops of Damascus, battling guards or barrelling his way through a crowd with troops in hot pursuit, you have to admire the way he interacts with the environment and the way the human elements of the environment interact with him. The views from the high-points of each city, or from isolated towers in the Holy Land at large, are breathtaking in their reach and glimmering detail. Assassin’s Creed is a simply beautiful game to watch. 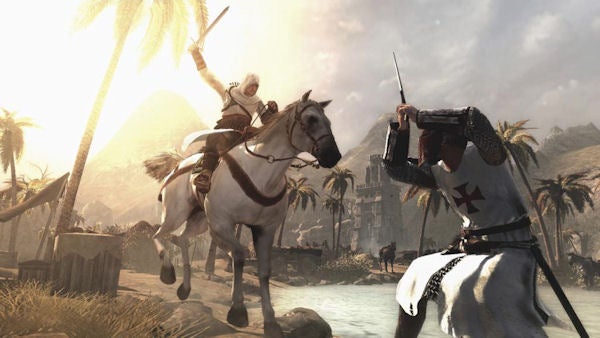 What’s more, Ubisoft Montreal has delivered on many of the promises it made about advanced crowd behaviour. The game focuses on activities in the three main settlements of a third crusade era Holy Land, and each of these cities is teeming with soldiers, merchants, beggars, madmen, jar-carriers, scholars, knights and general, busy-body bystanders. Start clambering up walls in the middle of the street and they start commenting on your weird behaviour. Guards watch you to see whether you’re behaving suspiciously. Run away from the authorities, and sections of the crowd will help or hinder you according to your previous behaviour. Perhaps it’s not quite as convincing as some of Ubisoft’s carefully created trailers have made out – in particular the sight of Altair gently pushing through the crowd looks strange and artificial in less populated areas – but it’s streets ahead of anything we’ve seen in an open-world game before.

Even in the area I most expected trouble – the controls – the results are mostly successful. This is a game based fundamentally on stealth, murder, combat, climbing and evasion, and by mapping the face buttons to context-sensitive actions with the aid of a right-trigger defensive/offensive modifier, Ubisoft Montreal has given you a wide range of options without an overly complex set of controls. 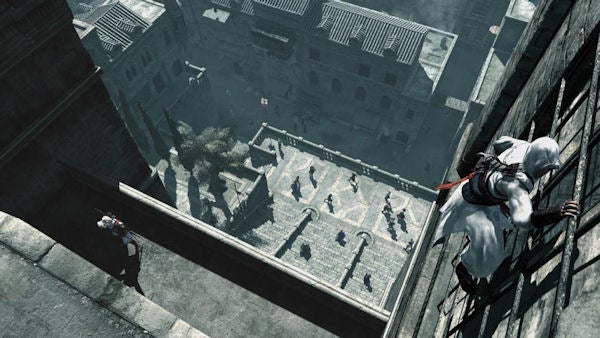 I had my doubts about the way the game handles many of the physical aspects of free-running, too, but again I’m pleasantly surprised. Hold the right trigger and press A, and Altair sprints in the direction guided by the left-analogue stick, leaping and clambering over any gaps or obstacles in his way. It sounds like Prince of Persia with all the challenge taken out, but not so. Here the challenge is in analysing the streets and rooftops, carefully plotting Altair’s route to give him optimum chance of getting where he needs to go or away from whoever is pursuing him. It oddly reminds me of Burnout, except instead of spotting chances to move through high-speed traffic, you’re spotting the best places for Altair to run and jump next.


Only two things really let the controls down. First, while the context AI is smart, there are still times when it makes the wrong choice at the wrong moment and sends you hurtling off the rooftops or away from a wall when you want to go up it – usually at the worst possible time. Secondly, combat is a little confusing, with a range of context or timing-sensitive moves using the triggers and A and X buttons that, even after many hours in the game, I still have trouble making sense of. Often it all feels a little unfocussed – I have a vague idea of how to get Altair to repel incoming blows or make a spectacular counter-move, but I never feel 100 per cent in control. 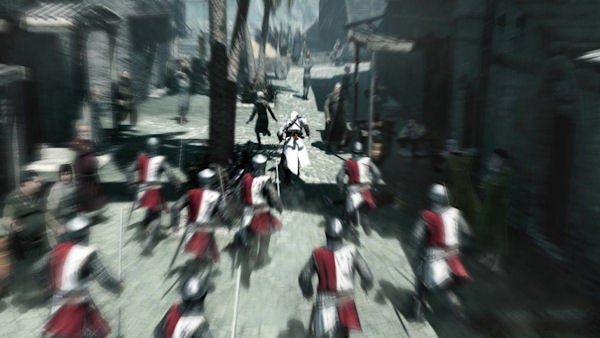 Still, put all this together and you have a dazzling, cutting-edge experience that really does look like the future of gaming – at least for the first few hours. But then, as the game progresses, it becomes clear that while Ubisoft Montreal has lavished attention on the graphics, the world, the history and the wider story – even the minute-by-minute game experience – they have dropped the ball when it comes to the way the game plays out, hour-by-hour.

Here’s how Assassin’s Creed works out in practice. Your master in the Assassin’s stronghold gives you a target. You travel through the Holy Land to the city where the target resides, and make contact with the local Assassin’s bureau. You then have to find information, but first you have to climb up to some high points so that you can get a wider view of the city and how it operates. After a few pinnacles have been reached, you need to get your data. Some of it you can get by watching then pick-pocketing those in the know. Other bits you can get through eavesdropping or by roughing up local insiders. Yet more scraps can be bought from brother Assassins, at the price of performing some helpful task for them. Once you’ve pieced a plan together, you go back to the bureau, then embark on the assassination attempt. Get your target, make your escape, and it’s time to return to the master for your next objective. 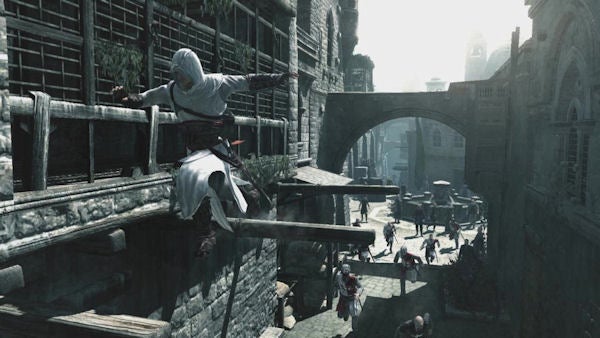 Played through once, it’s highly entertaining. Each component part works reasonably well, the climbing parts give you a chance to scale the most interesting parts of the city, and while not every assassination seems as cleverly designed or dramatic as you would have hoped from the various teasers, the murder and escape is usually thrilling stuff. The second and third time it’s still quite exciting. Each new city has its own distinctive look and feel, and new weapons and challenges get thrown in. The problem is that when you repeat this same basic cycle six or seven times in a row, it all begins to get a bit stale. By the time I got halfway through the game, my interest was waning dramatically. 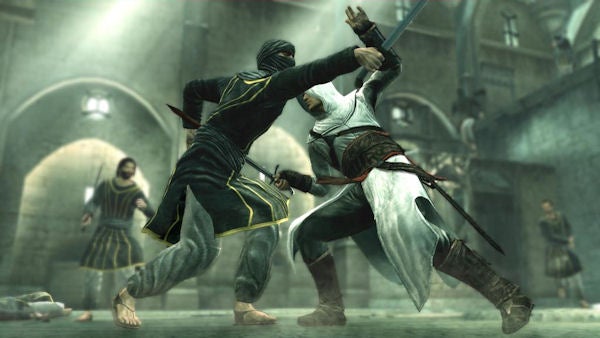 In fact, Assassin’s Creed has the same basic problem as this year’s much-loved Crackdown: it can feel like a whole game composed of side missions; the core missions seem to have been mysteriously pulled out. Crackdown got away with it because its rather scrappy missions – not to mention the various mechanisms of exploring every inch of the city and developing awesome super powers – were so much fun. In Assassin’s Creed, that isn’t always the case. The core missions are a bit samey. The actual side-missions, which involve collecting flags, knocking off templars and assisting victims of guard brutality, are okay, but not actually that compelling. Even the Holy Land outside the cities is lacking in fun. It has a few towers to climb up, a few flags to capture and a few gangs of soldiers to defeat, but it never comes alive in the way that, say, Hyrule does in the Zelda games.

So, Assassin’s Creed’s biggest secret isn’t its weird sci-fi framing story – sorry if I gave the game away to anyone whose residence is under a rock somewhere on a remote portion of Orkney – but the fact that for all its glamour and incredible technology, it can be a bit of a bore. To make this worse, the game relies more and more on guard numbers and mass combat as time goes on, in the mistaken belief that if two minutes of rooftop escapes or battling four soldiers is fun, then six minutes and eight soldiers will be proportionately more enthralling. Sadly, this isn’t the case. 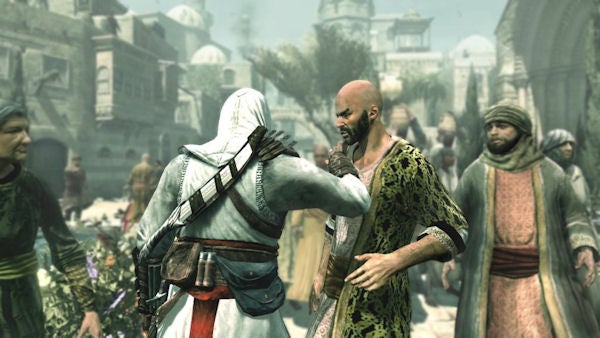 It’s actually the framing story that saves it, retaining your interest even when the gameplay threatens to lose it. Altair’s story is doubled by the story of a modern-day descendant, who is exploring Altair’s memories, genetically encoded in his body, at the behest of a sinister organisation. Short interludes, reminiscent of a Fahrenheit-like graphic adventure, give you new perspectives on Altair and his actions and give them a relevance to today. What are the Assassin’s real purposes, and how do they link up to the organisation’s? Why are you here, and what is going on? These are the questions that will keep you moving through. 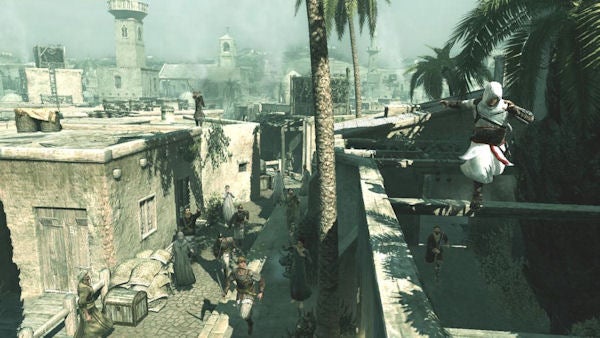 The important thing here is to admit but not get bogged down in the game’s faults. Play Assassin’s Creed for hour after hour and the repetition gets you down. Give it a break and play it in shorter stints, and you begin to see again what made it so appealing during the first few hours when you played it. At the halfway mark I was sorely tempted to drop the game for good, but I came back a day or two later and found that between scaling Acre’s giant cathedral and a particularly exciting escape from a Crusader stronghold, I was getting some exceptionally good vibes back again. In the time since, my interest has ebbed and flowed, but I’ll say one thing. When it’s good, Assassin’s Creed is exceptional. When it’s bad it’s merely mediocre. For a game with such stratospheric ambitions, that has to be a source of disappointment, but it’s a mistake to let that feeling go too far. For all its flaws, there’s something unique and magnificent here to be savoured, and my only hope is that Ubisoft Montreal can give us a sequel that pays a little less attention to the stuff that looks good in the show-reels, and a little more to the stuff that feels good when you’re sat in front of your console screen at home. Goodness knows, there’s a game in here that deserves it. 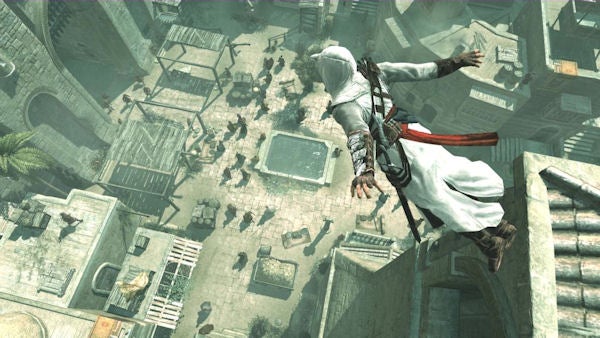 
For the first few hours it’s unbelievable. For the next few hours it’s getting tiresome. In subsequent hours it oscillates wildly between these two extremes. Buy Assassin’s Creed as a work of magnificent ambition, but try not to get caught up in its faults.