Available on Xbox 360, PS3 (reviewed)
With Assassin’s Creed: Unity released on the same date, Assassin’s Creed: Rogue was never going to get the lion’s share of attention, but that doesn’t mean it will be starved of affection. Linking the stories of Assassin’s Creed 3 and Assassin’s Creed 4: Black Flag, it caps off an American trilogy with a game that mixes the best bits of its predecessors. Along the way it takes the plot in an interesting direction and manages to throw in the odd surprise. If you’re bored sick of Assassin’s Creed then Rogue isn’t going to revive your interest, but if you liked Black Flag and can handle something broadly similar, then Rogue has you covered. You might even prefer it.

Set in between AC3 and AC4, it’s the tale of a young Irish fella, Shay Cormac (prepare for every cliché in the book) who joins a childhood friend in entering the Assassin’s brotherhood. Based around the North Atlantic and the east-coast of America, Shay works hard to be taken seriously, developing his skills, captaining a ship and going on the usual assassination and infiltration missions. That all changes, however, when a catastrophic mission leaves him questioning his old beliefs. It’s no spoiler to say that Shay turns rogue, switching sides from the Assassins and joining forces with the Templars. Slightly older, slightly wiser, he returns to the fray, battling old comrades, seeking new targets and working to frustrate the brotherhood’s ambitions in the colonies. 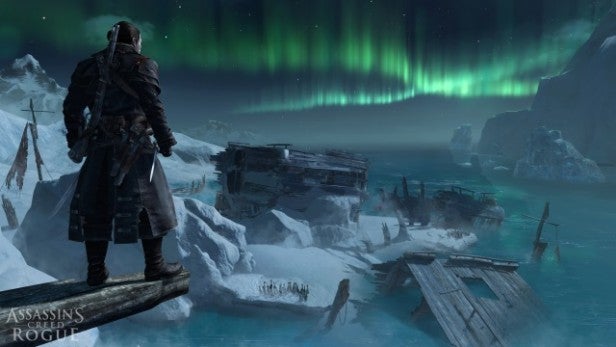 So what’s it like playing as a Templar? Well, it’s a lot like playing as an assassin, and even more like playing Edward Kenway, to be honest. You’ll spend roughly half your time exploring small coastal towns and fortifications or the streets of mid-18th Century New York, clambering up buildings, racing along rooftops, trailing enemies, breaking into compounds and casually slaughtering guards. You’ll spend the other half on your ship, the Morrigan, speeding from location to location, engaging in piracy, pausing to harpoon whales or track down hidden treasure, and attacking enemy forts.

The key difference is that your role as a Templar changes the dynamic. In some missions you’ll find yourself working directly against the brotherhood, spotting assassins and defending their target to thwart their aims. What’s more, you’re the hunted as much as the hunter, constantly listening for the whispers of the Stalkers, who lurk on the rooftops, in the underbrush or in an outhouse, waiting for a chance to race towards you and sink their deadly blades. It’s only a slight change, but it keeps you on your toes, flicking quickly to Eagle Vision to spot an ambush or using the new firecracker shots to lure them out. 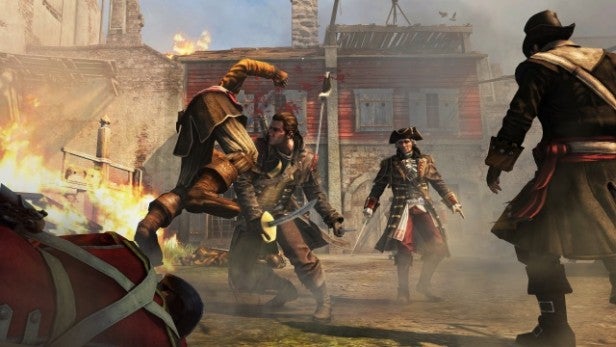 Otherwise, Rogue is mostly about new toys. A clever silent air rifle takes the role of Black Flag’s blowpipe, allowing you to send enemies to sleep or turn them berserk upon their comrades when you need to shift the odds in your favour. Later on that’s joined by a grenade launcher, capable of firing explosive shrapnel and berserk grenades. Even your ship gets kitted out with new equipment, with burning oil slicks, fortress-smashing mortars, a primitive machine gun and – our favourite – a brutal, ice-braking, timber-splitting ram. Combined with tweaks to the hand-to-hand combat system, these changes make both naval and land-based combat faster and more entertaining than in the previous two games.

There’s no getting away from the fact that Rogue has been made to a budget. Key locations like the Davenport homestead and New York are openly recycled from Assassin’s Creed 3, and while the North Atlantic locations and a distinctly frosty climate give it a different feel to Black Flag, few of the individual forts or townships are genuinely that distinctive. 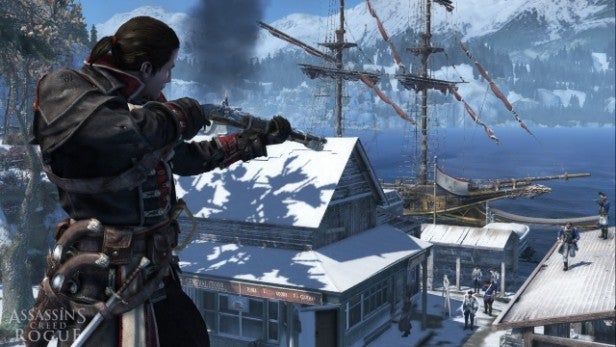 Nor is the scenery the only reason for déjà vu. Many of the missions are variations on extremely well-worn themes, and the game’s reliance on a sprawling set of systems for its secondary content doesn’t help. With piracy, hunting animals, hunting whales, collecting shanties, finding treasure chests, liberating forts and assassin-backed gang headquarters, renovating stores and community facilities to be enjoyed, amongst a range of familiar activities, little seems all that fresh or new, bar the new-style assassination missions.

Most seriously, Ubisoft still can’t get the structure and pacing right. Just as Black Flag seemed determined to bore you with same old, same old for a good few hours before really letting loose on the high seas, so Rogue spends a little too long setting up the narrative with the more conventional Creed game mechanics before the twist pushes the action in a new direction. The result is a game where the first few hours are – frankly – pretty boring. Rogue only comes to life around four to five hours in. 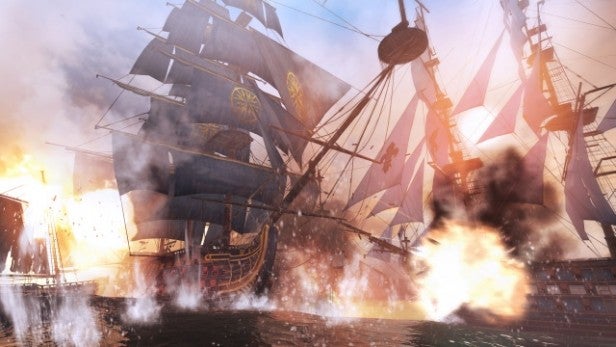 Once it does, it’s worth it. You feel that in not having so much pressure to reinvent the franchise, the designers of Rogue have been able to relax and focus on making this the best last-gen Assassin’s Creed possible. Parkour still has its awkward moments where you’ll find yourself clambering up the scenery when you’re trying to move around it or taking the route you didn’t intend to, but for the most part it’s a joy. The more counter-focused, Batman: Arkham Asylum-esque combat is more entertaining than it was in the past two games, even if you still need to take care not to be overwhelmed.

Variety seems to be the watchword; you’re never stuck doing one activity in one place for too long, as the game shifts you between New York, the river colonies, the cold Atlantic and some less predictable locations. Even the modern day elements – still unnecessary – keep the action moving along. And there’s something winning about Rogue’s smorgasbord approach. Here’s a massive feast of missions, side-missions and activities; take what you want, leave what you don’t. As long as you steal, scavenge and salvage enough stuff to keep the Morrigan on top in battle, you’ll be fine. 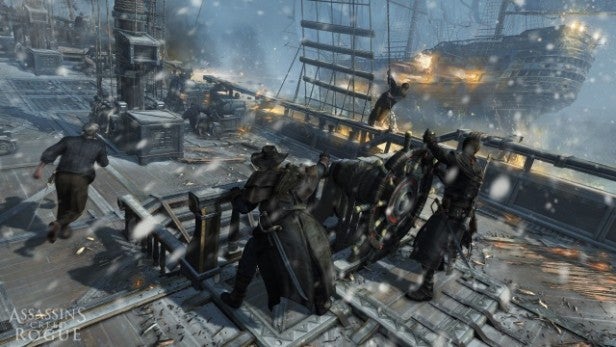 Like Black Flag, it also benefits from a strong hero and a half-decent plot, with Shay agonising over his choices and reluctant to tackle former friends. He’s a more moral character than that charming rascal, Edward Kenway, and a more likeable star than AC3’s Connor. Rogue does a fine job of shoerhorning in historical figures, while also throwing in familiar faces like Achilles and Adewale. What could have felt like a secondary side story – like Assassin’s Creed III: Liberation or the Tyranny of King Washington and Freedom Cry dlc packs – feels like it adds something more to the series, bridging some important gaps.

Visually, it’s another last-gen corker, taking the already impressive graphics from Black Flag and building something darker, icier and more majestic. It’s not always flawless, with wretched frame rates ravaging one major action sequence and the odd weird glitch, while we found the game has an odd habit of substituting the young Shay for the older, Templay Shay while out on the high seas. Yet 99% of the time Rogue looks good enough that you’re not left aching for a next-gen console version. We’d be interested to see how it measures up on PC. 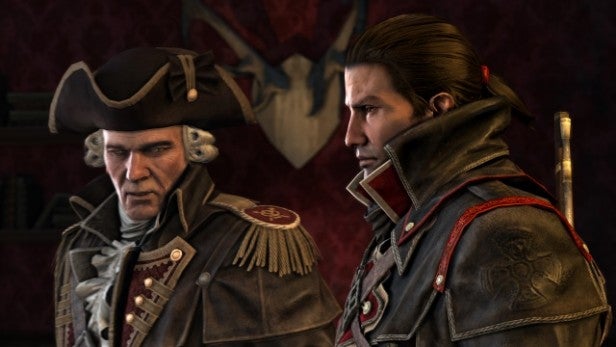 Let’s be clear: if you’re dog-tired of Assassin’s Creed and you’ve already had your fill of Black Flag, then we wouldn’t recommend buying Rogue. For all its strengths, it’s basically more of the same with a few nice twists. If, however, you loved Black Flag and like the cut of this sequel’s jib, then it’s a righteous bit of plunder. Sure, it’s Assassin’s Creed and not the series at its most inventive or cutting edge, but it’s arguably the best and most varied Assassin’s Creed since Brotherhood, and a good reason not to bin your last-gen console yet.

Verdict
Refined gameplay, some fun new toys and a cool Templar twist are enough to make Rogue the equal of Black Flag. In fact, some fans might even prefer it. Though familiar game mechanics and locations create a strong sense of deja-vu, there’s enough good stuff here that this final chapter of the American trilogy doesn’t feel like a cash-in. It won’t change the minds of those bored of the series, but it should please the many who aren’t.