Pushing out Assassin’s Creed: Brotherhood just a year after Assassin’s Creed 2 was something of a feat for Ubisoft. What’s more, a game that many of us expected to be a glorified mission pack turned out to be not just an excellent chapter in the Assassin’s Creed saga, but arguably the best game in the series. It continued and expanded the renaissance adventures of Florentine avenger, Ezio Auditore da Firenze, taking him to a fantastic new location – Rome – with the Borgias for enemies and a scattering of exciting new game mechanics to ensure that the action never felt staid. It was a textbook example of a sequel.

It’s a feat that Ubisoft has obviously tried hard to replicate with this year’s follow-up, Revelations. The opening credits roll through a bewildering number of Ubisoft development teams spread throughout the world, making it clear that the publisher has thrown vast quantities of people and resources at the latest chapter in order to hit an annual release. Sadly, it hasn’t worked out so well this time around. Revelations is a good Assassin’s Creed, but not up to the standard of its two predecessors, and while you can understand the desire to maintain the series’ momentum, it leaves you feeling that it’s running out of puff. 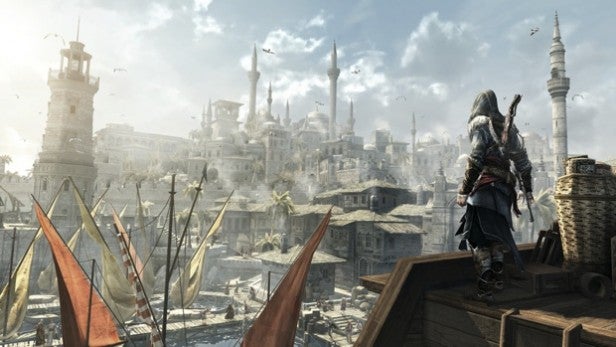 It’s not as if Revelations is a repeat of what we’ve had before. After a brief preamble featuring modern day hero, Desmond, the action returns to Ezio, now in late middle age, and on the trail of the lost wisdom of the first game’s hero, Altair. One short assassin’s refresher course later, and our hero finds himself in 16th Century Constantinople (or Istanbul as we call it these days), battling the templars, getting hooked up in conspiracies, and searching for a set of keys that will unlock Altair’s secret library.

The city might be new and Ezio older and wiser, but the core of the gameplay remains unchanged. Ezio can roam around Constantinople at will, climbing up the sides of houses, mosques and palaces, racing across the rooftops and generally getting involved in the kind of leaping, swinging and diving acrobatics that we used to associate with Prince of Persia. There are items to collect, guards to harass and areas of the city that you can only map out by climbing to high vantage points and synchronising your senses with a passing eagle. 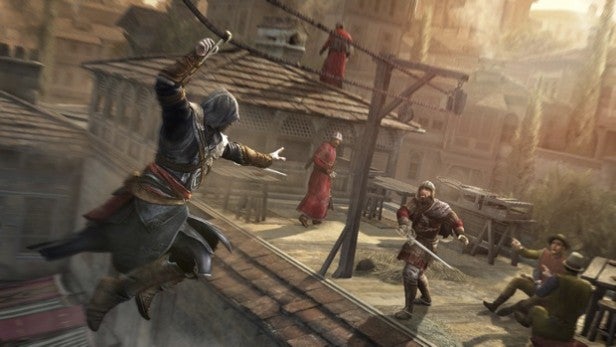 Getting to specific locations will open up a mission, most doing something to further the ongoing plot. There’s a spot of fighting to be done, with a system that relies heavily on timing to chain together critical attacks and the odd bit of stealth and spying, as you follow a corrupt guard captain or dress as minstrels to infiltrate a special event. As with Assassin’s Creed 2 and Brotherhood, the team has taken pains to ensure that missions stay interesting and that the mindless repetition of the first Assassin’s Creed remains a thing of the past.

Meanwhile, the innovations introduced in Brotherhood all make a welcome return. Once again you can recruit assassins, call for their lethal brand of assistance, or train them up by sending them on missions overseas. Once again, there’s a recurring objective where you clear areas of the city from Templar influence by assassinating the local captain and setting light to a beacon in the nearest tower. These were good additions last time around and they’re still good here. Revelations is never short of things to do 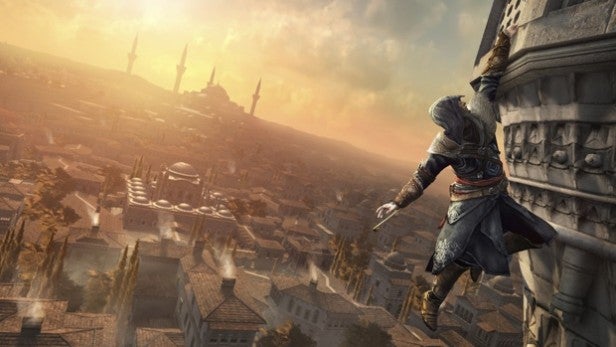 And we do get some new gadgets thrown in too. The most convincing  is the hookblade; a handy implement that allows Ezio to scale walls more rapidly and increase the length of gaps that he can jump. Best of all, it can be used to slide down the generously scattered ziplines that have cropped up all over Constantinople; for what purpose we can’t really imagine.

Rather less convincing is the new system of custom-crafted bombs. You can create a range of different devices from different combinations of cases, gunpowder and other components, and each has its own destructive or tactical application. These add to Ezio’s already wide range of options, but don’t prove quite as significant an enhancement to the gameplay as Ubisoft obviously thought, judging by the way that bombs are pushed at you at every conceivable opportunity.

Finally, Revelations throws in a new Tower Defence sub-game, which kicks in when you need to defend your conquered zones from resurgent Templar forces. As you fight off each wave you build morale points you can spend on various types of assassin, before positioning them in order to wipe out the next wave before it reaches your stronghold. This activity is pretty much optional, which is lucky, as the missions get less and less enjoyable as time goes on. 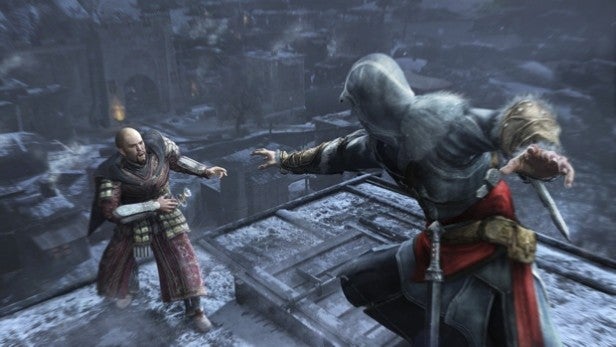 Up to a point this all works. All the running, jumping and fighting stuff was fun in Assassin’s Creed 2 and Brotherhood, and it’s still fun here. The storyline is intriguing, and Ubisoft hasn’t lost the knack for dragging real historical characters and situations into the narrative. Even if most of us aren’t as familiar with the history of the Ottoman empire as we are with the big names of renaissance Italy, there’s plenty of good stuff to chew over, and it wouldn’t be Assassin’s Creed if you didn’t learn something new every day.

Nor is Constantinople the problem. It’s not as big, as rich or as varied an area as Rome, but it has some great landmarks to explore, including the magnificent dome of the Hagia Sofia, and a few additional locations open up with time. Revelations is a game with some magnificent moments, including a superb, Tomb Raider-esque platforming section in caverns beneath the streets of Constantinople and a new twist on the old Escort mission at an imperial party. It’s not like it’s hack-work, by any means. 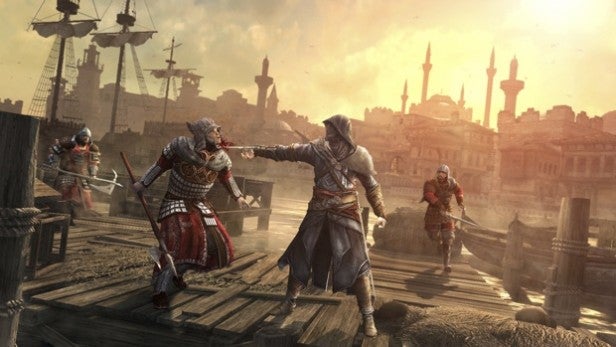 Unfortunately, there’s no getting away from the fact that – by this point – fans of Assassin’s Creed will have done variations of most of the activities on offer many, many times before. The tiles and the architecture might have changed, but one big climb or rooftop escape starts to feel a lot like the dozens you’ve had before, and it has to be said that the missions don’t seem so polished this time, either. We’ve seen some where you can fail within a few seconds of reloading the last checkpoint, and others where you can succeed without actually being that actively involved. A surprising number will only let you through if you obey instructions to the letter. Plus, there are still many frustrating moments where Ezio decides to hurl himself from a wall rather than clamber up to the next level, just because you’re not quite in the right position to trigger the next context-sensitive move.

And while one of Revelation’s biggest draws is supposed to be the way it ties the stories of Altair, Ezio and Desmond together, it all falls slightly flat. There’s a willingness to experiment in Desmond’s new first-person platforming sequences, but Altair is reserved for a handful of flashback sequences which are amongst the most tedious and irritating in the game. 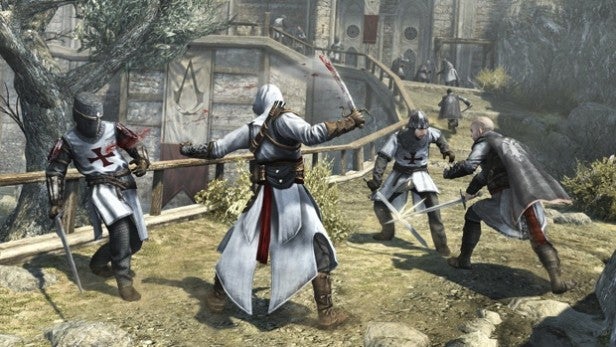 Of course, it all still looks marvellous. Revelations features some of the best art in the series, and the animation is as fluid and lifelike as ever. Uncharted 3 has it pipped when it comes to realistic interaction with the environment, but Assassin’s Creed can still be breathtakingly gorgeous. However, there are points at which things fall down technically, including guards who appear to have sunk into the rooftop or who fall straight through a solid wall. Still, given the size of the world and the amount of things going on in it, it’s hard to really complain.

Revelations isn’t a disaster, just a mild disappointment. Most of the extraneous new features can be safely ignored, and fans of the series will still play through happily just to see where Ezio – one of the most charismatic heroes in modern action games – ends up. It also expands one of the most under-rated multiplayer modes around with new game modes and a few nice tweaks. All the same, there’s a very real sense that next year’s rumoured Assassin’s Creed 3 needs more than a change of hero and a change of period to keep our interest; it needs to give us something tangibly new.

Verdict
After the double-whammy of Assassin’s Creed 2 and Brotherhood, Assassin’s Creed: Revelations is a slight disappointment, It still ends Ezio’s portion of the saga with a bang, but the core gameplay is growing stale and it’s not lifted by a selection of trivial or unexceptional enhancements. A solid chapter rather than a great one.