You might not be looking for a new Assassin’s Creed game so soon after the enjoyable Assassin’s Creed: Syndicate, but here comes the second of the three-part Chronicles series. Like last year’s Assassin’s Creed Chronicles: China, India is a stylised 2D platformer with 3D elements, but one that stays surprisingly true to the main series. While it’s much more streamlined and linear than Ubisoft’s lavish open-world extravaganzas, it still goes heavy on stealth, sneak attacks and precursor mumbo jumbo. What could have easily felt like a cheap spin-off feels instead like an extension of the saga.

This time around our hero is Arbaaz, an assassin in 1840’s Amritsar battling the Templars and the East India Company. With a mentor to rescue and the Koh-i-Noor diamond to recover, our hero has his work cut out for him, and that’s before the latest Templar leader starts messing around with precursor sites. Before long you’re on another breakneck race to stop the Templar’s evil plans. 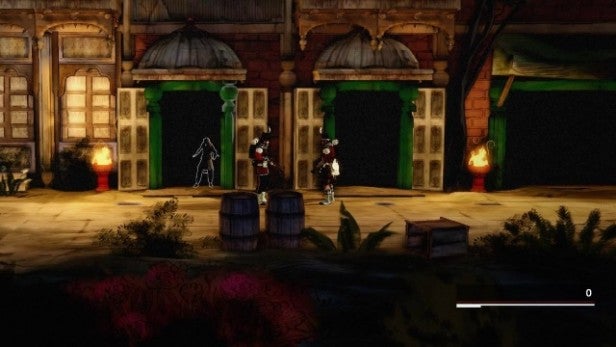 With the new hero, tale and setting comes a slightly different visual style, switching the brush-stroke style and minimalist colour palette of China for something richer and more colourful, where the splashes of crimson are complemented by great swathes of orange, green and purple, and where complex patterns become a recurring motif. Like China, it looks pretty gorgeous in motion, even if there’s little here in terms of texture or detail to stretch your Xbox One or PS4 too much.

On first impressions, the gameplay hasn’t changed so much. Arbaaz doesn’t feel quite as swift or graceful as China’s protagonist, Shao Jun, but his basic move set is broadly similar, and the basic mechanics of running, jumping, sliding, lurking in the shadows and dashing from hiding place to hiding place remain unchanged. Arbaaz does, however, come with some new weapons and gadgets, complementing his trusty sword and noise-maker darts with smoke bombs and chakras; a handy new sort of thrown weapon that can ricochet off walls and slash through ropes. 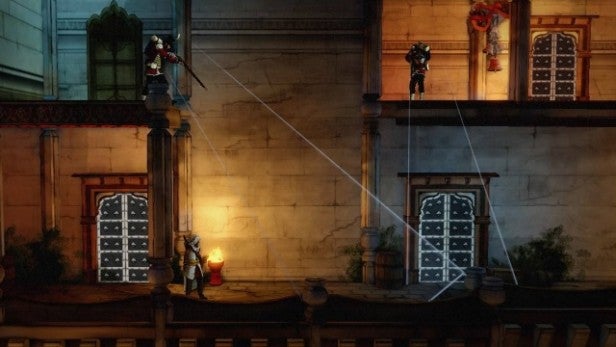 If you played through China – and it’s well worth doing so first – then much of India will feel familiar. The stealth mechanics, with easy-to-spot guard routes and clearly visible perception cones, are tight and well-honed, and sneaking up and delivering stealth takedowns is as satisfying as ever. The combat system, with quick and heavy attacks, shield-breakers and counters, works well against one or two foes, and the jumping and clambering moves are as slick as you’d expect.

Beneath the surface, though, there’s a subtle change of focus. Where Shao Jun was a fast and deadly fighter, capable of extricating herself from scrapes with the aid of blade and dart, Arbaaz is much more at home in the shadows, avoiding discovery altogether. While the forgivingly short 10 second alert cooldown from China is retained, Arbaaz seems to find himself in more perilous situations, where being spotted often leads to a quick and certain death. This makes India a more cautious, considered and stealth-focused experience than its predecessor; one where watching the environment, understanding guard patterns and planning strategies becomes much more important, simply because there’s less scope to escape when things go pear-shaped. 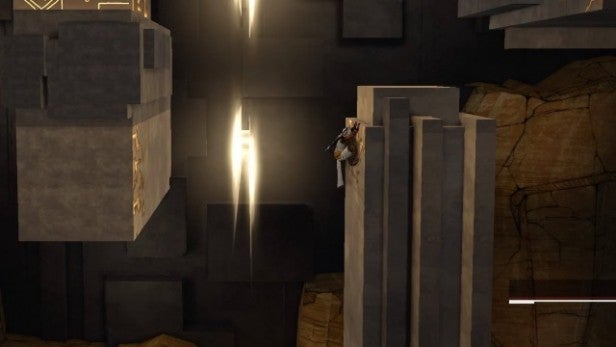 Sometimes this works to the game’s benefit. Arbaaz has the moves, after all, and the game’s stealth sections often play out like puzzles, where working out where to go and who to take down first, or even which gadget to use where, becomes a satisfying challenge. With a few hours, India also throws in a range of Helix abilities, which can be used to move imperceptibly between hiding places, string a series of unstoppable attacks together, or just blend in with your surroundings. There’s some great tension while you’re hide-and-sneaking, and some great release when you pull off the perfect stream of moves.

Sometimes, however, it makes India a serious pain to play. There are stretches where you’ll keep trying different strategies, only to have each one scuppered by one single, last-minute fudge or blunder. In some cases, trial and error is the only way to inch your way forwards. Margins of error are often tiny, and you’re not always aware of a guard or a potential pitfall until you find out about them or it the hard way. Paying attention and using Eagle Vision will help you, but won’t make the problem go away. 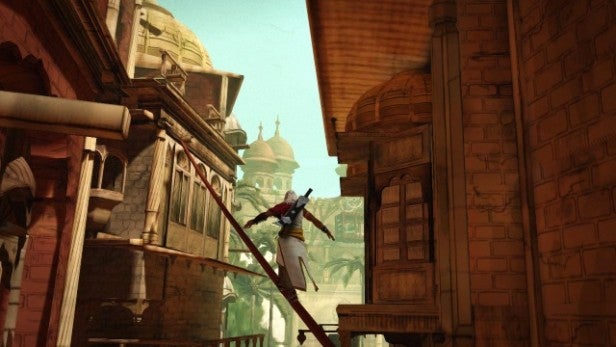 To make things worse, many sections feature tight time limits, robbing you of any chance to take things slowly and with due caution. Nor is stealth responsible for all the difficulty spikes, with precursor sites full of insta-death traps equally harsh on minute errors of control or timing. It’s at these moments where you’ll most rue the control systems’ one failing; the use of up and down to move you up and down but also, when appropriate, move you between the planes of action. This will hit you when you’re trying to climb down a surface then clamber underneath it, or when you’re trying to climb up a surface without leaping straight into the firing line of a waiting guard. Prepare for some real controller rage.

At times, the game’s instant failure restrictions seem spurious and unnecessary. Why must you go unseen and avoid combat here? Why are certain guards totally immune to stealth attacks? Why can’t Arbaaz jump over that low wall and evade detection, when the only reason seems to be that the controls won’t allow him to move into the screen at that point? 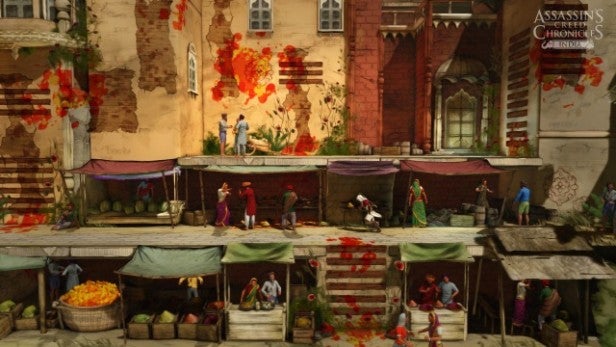 There’s nothing here that’s insurmountable, or that most players won’t conquer with a mixture of skill, attention and persistence. All the same, the end result is that India is in some ways a stronger, more challenging game than China, but in others a less enjoyable one. It can be beautiful, well-staged and demanding, but also hard to persevere with. Perhaps that’s because it still struggles with China’s biggest issue: a lack of personality, drama and really exciting set-pieces. At it’s best it can be very good, but it’s never the kind of game that sweeps you away or makes it impossible to put the controller down.

And while I’m moaning, would a few more lines of dialogue really have busted any budgets? If guards are just going to repeat the same two or three exchanges to each other throughout the game, it might actually have been better had they said nothing.

Verdict
The second episode in the Chronicles spin-off series is as good-looking and well thought-out as the first, but marred by frustrating stealth and platform sections and flawed controls. While the visuals are impressive and the mechanics mostly solid, the level design will test your patience yet leave you oddly underwhelmed. Here’s hoping the last part, Russia, brings some big improvements.