Available on Xbox One (reviewed), PS4, PC
A spin-off series is usually one of three things. Sometimes it’s (A) a way to bring a franchise to new platforms where the normal game might not be appropriate. Sometimes it’s (B) a way to expand the possibilities of the series, trying on different stories and game-styles for size. Sometimes, (C) it’s just a quick cash-grab exercise, milking the fanbase for another few quid while the team polish off the next instalment. Guess which one applies to the new episodic spin-off of Assassin’s Creed?

Why, you cynical bunch! In this case it’s answer B. While the screenshots might have you thinking ‘cheap retro platformer with nice stylised artwork’, Assassin’s Creed Chronicles: China actually does an impressive job of taking the fundamentals of Assassin’s Creed and making them work in a 2D game. By necessity it’s short, to the point and streamlined, but it’s credible both as an expansion of the AC universe and as a smart stealth-action effort.

This opening salvo takes the saga back to 1526 and China, following the last remaining Assassin of the Chinese brotherhood, Shao Jun (fans might remember her from the short movie, Assassin’s Creed: Embers, and this tale continues on from there). Shao Jun returns from Europe to find the brotherhood destroyed by a Templar group, the Tigers, who threaten to dominate China during the twilight years of the Ming Dynasty. Our heroine takes it on herself to avenge her order, slay the Tigers and end their fiendish plans. 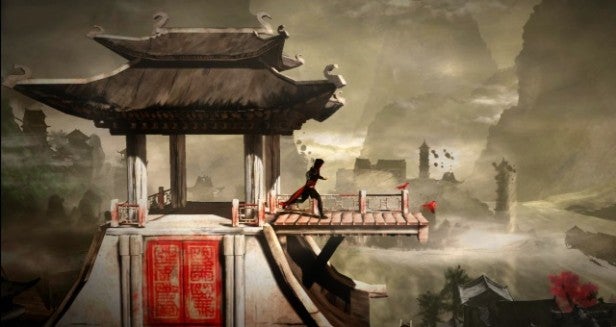 It’s played out in 2D with 3D elements, but while it has platforms, climbing and jumping, we’d hesitate to describe Assassin’s Creed Chronicles: Chronicles as a 2D platform game. The reason is that it incorporates a surprising number of the features and game mechanics you’d expect to see in a ‘proper’ Assassin’s Creed, only working within the confines of a linear 2D design.

Cleverly, the game feeds the mechanics in gently as you go. Early on you’re running, jumping, climbing and pulling off stealth kills, then you’re distracting guards with noise-making darts and firecrackers. Soon the game sneaks in some slick hide-in-shadow mechanics, with the bonus that you can shift quickly from one dark doorway to another with a twitch of the stick and a tap of a button. From there we get hiding in the shrubbery, sneaking around columns, dangling from the ceiling with the aid of a rope-dart, sliding attacks and – that old AC favourite – mingling in with crowds. Even climbing towers, synchronising to pull in map info and the classic leap of faith move get a look-in. It seems that the development team at Climax has put a serious amount of effort into looking at Assassins’s Creed, working out what might work in 2D, then adding new moves and gadgets to fill things out. Those efforts have paid off.

Just about everything works. Recent Assassin’s Creeds have sometimes lost touch with the series’ stealth/traversal roots. Not here. The combination of the 2D presentation and the smart mechanics seems to put the focus back on stealth, and there’s something hugely satisfying about pulling off a chain of moves to get you through the next part of the level. First you watch the guards and their cones of sight to spot your opportunities, then you sneak through, flitting from hiding place to hiding place, speeding up a wall and leaping into shadow when a back is turned. You might use opportunities for sneaky kills, or even take on the occasional foe in face-to-face combat, but this is primarily a game of moving quickly, intelligently and decisively from A to B, then killing C. 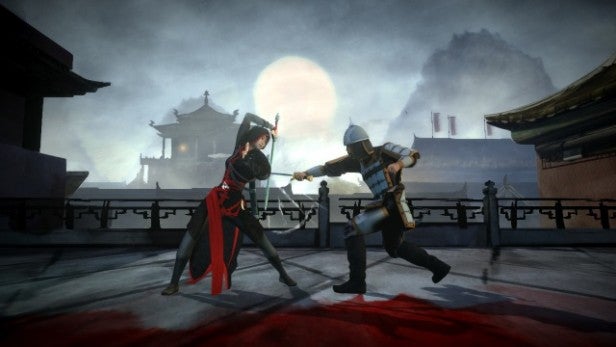 The game encourages a stealthy, leave no trace approach, but it doesn’t penalise you too much if things go awry. If you or a corpse is spotted guards will go on high alert, but the timer resets fairly quickly and you’re only pursued by guards within easy reach, not those above or below. There’s also a basic close combat system in place, complete with fast attacks, heavy attacks, blocks and evasions, and if you’re not surrounded or overpowered by crossbow fire you have a chance of winning through. At the end of each section you’re rewarded with a score for one of three play styles – shadow, assassin and brawler – so you’re rewarded even when things turn nasty, provided you can make it through intact.

That won’t always be easy. Chronicles: China can be challenging, particularly once the action heats up with more guards, more complex patrol patterns, noisy floors and more enemy-alerting threats – guard dogs, wind chimes and noisy birds can all spoil your sneaking. There are sections that require a little trial and error, or where you might take multiple efforts to get through, but the solution – or just one of several solutions – is always staring you in the face. This is a demanding game without being a frustrating one, and you restart almost instantly on failure (are you listening, Bloodborne?)

There’s variety, too, with the initial dungeons giving way to shipyards, fortresses and provincial towns, each with new challenges and dangers. Throughout, 3D elements are used to push you in and out of the action, with beams and grappling points to take you from one 2D plane to another, and walls you can scale that face the camera. It’s beautifully presented, with art based on Chinese inks and watercolours, creating a world where the soft greys and pastal scenery give way to the black-and-red swish of Shao Jun’s robes or a splattering flourish of blood. Ubisoft promised three games with three distinctive art styles. It’s certainly off to a good start. 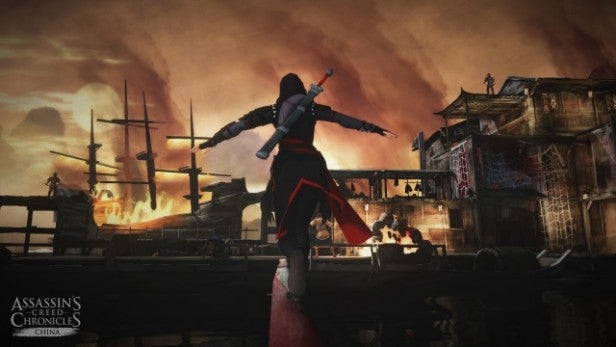 In fact, the worst thing I can say about Chronicles: China is that, for all the time we spent enjoying its slick stealth gameplay, its lovely visuals, its well-paced level design, we sometimes found it weirdly unengaging and – worse – oddly lacking in atmosphere. Shao Jun is an intriguing protagonist, but not as well fleshed out as Ezio Auditore or Edward Kenway, or even AC Liberation’ Aveline de Grandpré. The same goes for her struggle with the Tigers, and the rather generically nasty Tigers themselves. The Assassins Creed games have always made the most of both story and setting. Chronicles: China falls slightly flat on both. What’s more, for all that we enjoyed the minute to minute action, we kept waiting for some ‘wow’ moment; some brilliant set-piece or dazzling sequence that never came.

That’s a slight disappointment, but no disaster. If Chronicles: China never achieves greatness, then at least it’s consistently good. It’s neither too short nor outstays its welcome, and there’s replay value in the secondary missions and a New Game Plus mode. At the very least, it’s a solid start to the Chronicles series, and with two more instalments to come, one set in India and one in Russia, there’s hope that the next could raise the bar.

Verdict
Assassins Creed Chronicles: China does an impressive job of taking the lore and core mechanics of the series and making them work in a 2D game. It’s slick, fast-paced and entertaining, with some beautiful stylised art, and all it lacks is a little magic to turn it from a good spin-off into a great one.