The promise of full-scale console games on a handheld system is the Sony PS Vita’s biggest strength and biggest weakness. When it works out, we get games of the quality of Uncharted: The Golden Abyss, Ultimate Marvel vs Capcom 3 and LittleBigPlanet PSVita. When it doesn’t, we get something more like Resistance: Burning Skies. To be honest, we didn’t hold out much hope for Assassin’s Creed 3: Liberation. Not only is it a side-story to Ubisoft’s 2012 historical blockbuster, but early preview sequences we’d seen were beset by technical issues, as well as appearing dull and unimpressive. It’s a surprise, then, to report that Liberation is mostly very good – and in some ways more enjoyable than its big-screen console sibling. 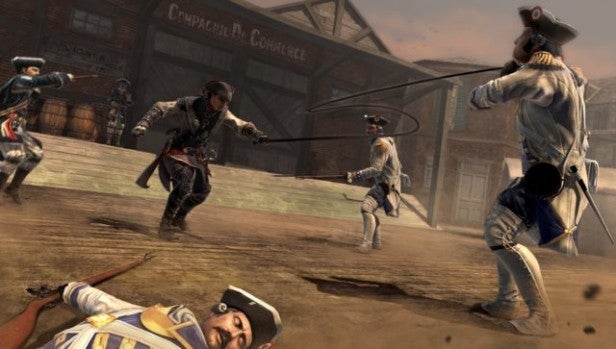 While set in the same era as Connor Kenway’s War of Independence adventure, Liberation swaps Boston, New York and the Northern frontier for New Orleans, the Bayou, and some other settings we wouldn’t want to divulge. The whole Desmond framing story goes out of the window – you’re simply playing a simulation powered by the latest Animus technology – and you have a new heroine, Aveline, a young mixed-race New Orleans ‘it’ girl who moonlights as an assassin. Where Assassin’s Creed 3 is the story of Connor’s involvement in the American revolution, Liberation tells a slightly smaller scale story of one young woman’s battle against slavery, and against the Templar forces profiting from it. The shocking thing is that – for a long time – it’s none the worse for it. Not only is Aveline a more sympathetic protagonist than Connor, but her more stripped-back and streamlined narrative is also more immediately engaging.

Here’s another turn up for the books: Assassin’s Creed 3: Liberation both looks and plays very well. There’s inevitably less detail to the characters, the scenery and the architecture than in the home console based Assassin’s Creed 3, but a lot of the visual appeal has made the transition intact. And while some earlier reviews have complained of choppy frame rates, we’ve found the game very smooth for most of our playing time, with the frame rate only dropping occasionally during particularly hectic bouts of combat. It’s not that the game is free of glitches – guards and passers-by getting stuck in the scenery are a regular occurrence – but we’ve yet to see anything that really spoils the action. 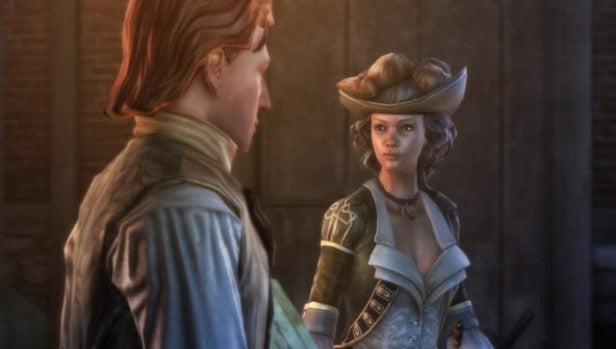 Meanwhile, Aveline can be controlled with the same kind of grace as Ezio or Connor, racing up buildings, clambering up trees and speeding from rooftop to rooftop with ease. At times the context-sensitive controls still send you entirely in the wrong direction, or leave you clinging to a ledge when you were really planning to keep moving forwards, but there’s nothing there that fans of the series won’t find familiar. New Orleans proves to be more Parkour friendly than Boston, and while the Bayou doesn’t present the same breadth of scenery as Connor’s Frontier wilderness, there’s still plenty of opportunity to climb trees, leap from branch to branch and wrestle alligators. 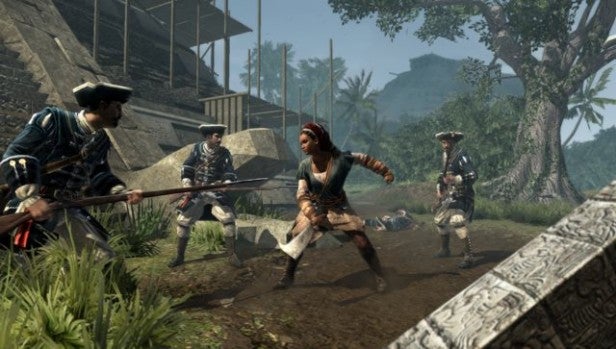 Combat is broadly similar to Assassin’s Creed 3, with an emphasis on blocks and counters over hack-and-slash swordplay. The timing isn’t quite as tight as in the console title, making it hard to counter and kill multiple foes in the heat of battle, but to compensate it’s slightly easier to tackle some enemies using standard attacks.

The real surprise, though, is that Assassin’s Creed 3: Liberation does, to some extent, see the series return to its more stealthy roots. You’re not just encouraged but occasionally restricted to using silent, ranged attacks, attacking from cover and tackling enemies before they are alerted, with some missions featuring instant-fail conditions if you don’t.

In fact, Assassin’s Creed 3: Liberation pushes stealth even further by introducing a new feature, Personas, where Aveline can swap between three sets of clothes with corresponding skills. In her normal assassin gear she’s faster and more deadly in combat, but when dressed as a slave she can merge in with real slaves by carrying boxes or sweeping the yard, while still having a reasonable balance of acrobatic and combat abilities. In lady guise these mostly disappear, and Aveline is unable to climb or jump altogether, but to compensate she can wander around many areas with impunity, and use a charm skill to get guards to move aside or even tag along, calf-like, behind her. 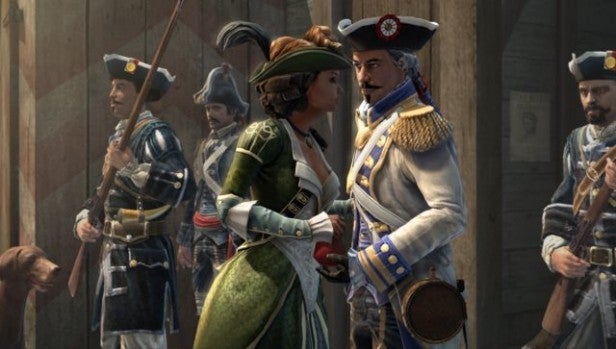 At some points the game insists that you adopt a specific guise, but in many situations you can pick your own guise and approach. The lady persona might not be ideal for fast escapes or full-on combat, but if you want to infiltrate an urban area and sneak up on your quarry from behind, then it provides a different way of doing so. As the slave you’re weaker than you are as an assassin, but there’s scope to blend stealth with violence as matters demand.

All of this, in tandem with some nicely designed missions, interesting characters and atmospheric settings make Assassin’s Creed 3: Liberation a lot of fun to play, and in some ways the overall feel is closer to Assassin’s Creed 2 and Assassin’s Creed: Brotherhood than the slightly more po-faced Assassin’s Creed 3. The Vita game’s biggest problem is that it doesn’t have quite the same depth. There are fewer side-missions and optional activities than in the console games, and while there’s a simple trading mini-game and some collectibles, they’re not really compelling enough to distract you from the still nice and lengthy main plot. 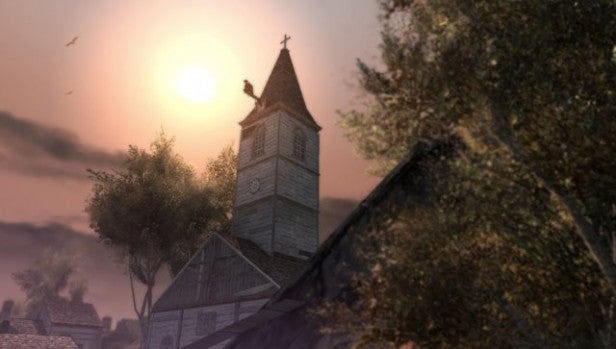 It’s also a shame that one of the game’s most interesting ideas – that the Animus simulation is being hacked to show you the truth – feels relatively underexplored. And where Connor’s plotline grows more interesting as the game progresses, Aveline’s becomes a bit predictable, and doesn’t have the historical interest of, say, Ezio’s saga. It’s a decent enough tale, but you can’t help feeling that a heroine this likable deserves better.

Perhaps the biggest irritation is that USP Sony PS Vita features are occasionally and needlessly shoehorned in. Using touch to target or select weapons works reasonably well, but having to use the front and rear panels to open envelopes or the rear-camera to decipher secret messages is just annoying. You can use a canoe to move more quickly round the swamplands of the Bayou, but the touch controls make doing so so exasperating that you rapidly forget the whole idea. Meanwhile, the console Creeds’ impressive multiplayer features have been replaced for a baffling asynchronous strategy game that’s barely explained and almost totally uninvolving. 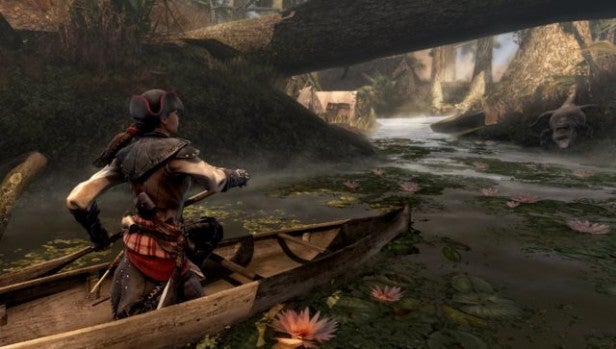 All of these factors mar Assassin’s Creed 3: Liberation slightly, but they don’t change the fact that this is still Assassin’s Creed, and still a very entertaining historical thriller in its own right. It can’t match the epic scope of Connor’s world, but there’s still plenty to explore in New Orleans and the Bayou, and you’re rarely left feeling that you’re playing a cut-down imitation of the real console deal. Stop trying to compare it to the Xbox 360 and PS3 games, and it’s easy to become as absorbed in Liberation as you would have been in them.

Assassin’s Creed’s PS Vita debut has its faults, from minor technical issues to a shallower range of gameplay. None of these detract from the fact that it looks, feels and plays like an Assassin’s Creed should, with a great heroine, some atmospheric settings and a few interesting tweaks to the gameplay. It’s not quite good enough to sell systems, but if you’re a fan of the series and in possession of a Vita, then it’s an easy game to recommend.