ASRock’s X470 Taichi isn’t the best option for games but it makes up for that with impressive pace in application, memory and storage benchmarks – and plenty of connectivity on the board itself. It’s a little pricey, but it’s a good option for work machines.

What is the ASRock X470 Taichi?

The ASRock X470 Taichi is an unusual, eye-catching motherboard. It’s unusual because it costs £210 – so it’s a little more expensive than its main competition, but it isn’t pricey enough to really hit the high-end area of the market.

It’s eye-catching because of its physical design. The board itself is covered with a large, light design, and the bottom heatsink is built using a stunning arrangement based on cogs. 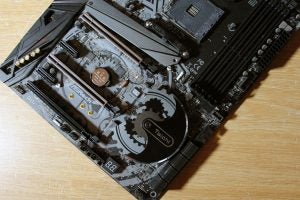 A top-down view of the ASRock X470 Taichi motherboard, showing off the cog-shaped heatsink.

Get beyond the smart heatsink and the ASRock has a reasonable core specification. This is one of the only boards in the entire group to still support running four graphics cards from AMD and Nvidia. Get beyond the two steel-surrounded PCI-e x16 slots and you’ll find the usual load-out of a slower PCI-e x16 slot and two PCI-e x1 sockets for smaller expansion cards.

The four DIMM sockets handle 64GB of DDR4 memory, clocked to a peak speed of 3466MHz. This is a little slower than most high-end boards can handle, but the vast majority of people won’t be pushing this limit anyway.

The two M.2 connectors support the faster NVMe standard – one better than the Asus ROG Strix X470-F Gaming, which restricted one of those slots to slower SATA technology. The ASRock also has eight SATA ports, which is two more than most mainstream boards.

ASRock’s board has a solid selection of fan connectors, and a connector for RGB LEDs, although this is one area where the Asus does go further. Still, ASRock has included RGB LEDs in its major heatsinks and audio circuits.

Impressively, ASRock’s board has a couple of USB 3.1 headers on the board itself, and it’s one of the only models I’ve seen with a USB 3.1 Type-C jumper – although there aren’t many cases out there right now that offer USB 3.1 Type-C on their front panels.

The ASRock does serve up a POST display – something that the Asus X470-F Gaming board doesn’t offer – but that’s it for enthusiast features. Teasingly, the PCB has spaces and labelling for power and reset buttons plus a TPM module, but they’re left blank here.

At the back you get a Clear CMOS button, unlike the Asus, and the ASRock goes one better by including 802.11ac wireless. It has a solid seven USB 3.1 ports, and a Type-C connection.

The conventional Gigabit Ethernet and ALC1220 audio are absolutely fine for gaming, even if they’re a step behind the Asus board.

The ASRock’s feature set is a little inconsistent. It’s certainly better for storage and connectivity than the similarly priced Asus, but the rival product has better audio and wired networking, and marginally better DDR4 memory support. 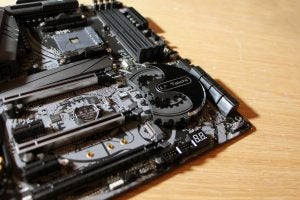 A close-up of the ASRock X470 Taichi, with the GPU mounts in the foreground.

The Taichi’s specification suggests that this board may be better with work and general-purpose computing than gaming – and benchmarks back that up.

Its single and multi-core Geekbench results of 4803 and 22,115 are better than the Asus board, and a step up on the vast majority of boards I’ve tested recently. In Cinebench, its results were a little behind the Asus but remain quicker than most boards.

Its Sandra arithmetic score is fine, one of the better in the group, even if it’s a tad slower than the AsusROG Strix X470-F Gaming.

The ASRock was the best-performing board in my test group when it came to NVMe storage. Its read and write results of 3,84MB/sec and 2497MB/sec creep ahead of the Asus offering. In the slower SATA test, the ASRock didn’t take a lead – but it still outpaced the majority of rivals. This board also proved faster than most in memory bandwidth benchmarks.

It was a little more ordinary in gaming tests. Its 3DMark: Time Spy and Fire Strike scores were slower than the Asus, and a little behind the majority of boards in this group. It took a tiny lead in Rise of the Tomb Raider, but its average frame rate in Middle-earth: Shadow of Mordor was further behind the Asus. 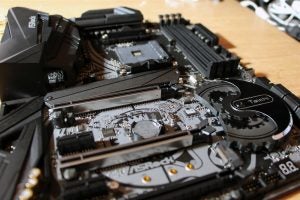 Another close-up of the ASRock X470 Taichi AMD board with the CPU mount visible top and middle.

Why buy the ASRock X470 Taichi?

The ASRock X470 Taichi isn’t a gaming board, so it’s no surprise that its performance in those latter tests is a little more ordinary.

Elsewhere, it’s quicker, with class-leading results in some storage tests and good pace throughout the majority of the productivity benchmarks.

It has a good set of features, in particular with regards to storage and connectivity. The core specification doesn’t quite have the capabilities to compete with the best boards in the audio and gaming arena, but it will still prove ample for most machines.

The ASRock X470 Taichi board is, perhaps, a tad too expensive. If you’re building a gaming or a general-purpose PC, its price is one of the main reasons we’d stick with the Asus ROG Strix X470-F Gaming. However, if you want a system for productivity or lots of storage, the ASRock is a decent professional option.

ASRock’s X470 Taichi isn’t the best option for games thanks to some slightly sluggish benchmark results, but it makes up for this with impressive pace in application, memory and storage benchmarks – and plenty of connectivity on the board itself. It’s a little expensive, but it’s a good option for work machines.