The ASRock Fatal1ty X470 Gaming K4 is one of the fastest gaming boards we’ve tested. However, it isn't the best with applications, so it’s worth investigating elsewhere if you want a product that can handle more than just games.

The ASRock Fatal1ty X470 Gaming K4 is named after a former pro gamer from the golden age of Quake III Arena. Get beyond the slightly anachronistic branding choice, though, and there’s plenty to like about this mid-priced black-and-red motherboard. 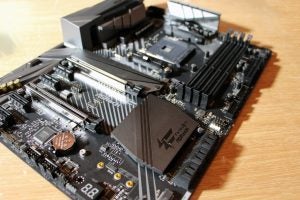 It’s a good-looking board, especially for the price. You still get a pre-mounted rear I/O shield and protection across the audio circuits, plus metallic heatsinks cover the components at the top of the board and the south bridge at the bottom. All three heatsinks have RGB LEDs.

This board doesn’t have the eye-catching, cog-based southbridge heatsink of the pricier ASRock X470 Taichi, and the heatsinks at the top of the board aren’t particularly big. This isn’t necessarily a negative, though – mainstream rigs don’t tend to push components to the point where they’ll require vast heatsinks. In addition, smaller heatsinks make it easier to fit in other components and cooling hardware.

This is a cheaper board, but the specification is only cut back in a couple of areas. The four memory slots accept only DDR4 at a speed of 3466MHz, which is a little lower than rivals. Nevertheless, it’s a reduction that most people won’t notice.

Secondly, while the two steel-supported PCI-E x16 slots support the full gamut of dual-graphics options, there isn’t a third PCI-E x16 slot on this board. That’s a difference between this board and its pricier competition – including the MSI – but you do get four PCI-E x1 slots to make up for it.

This board has two M.2 connectors. That’s on a par with most other high-end and mid-range boards now that AMD’s chipset offers that natively. However, the second connector on this board uses an older NVMe standard – so it’s restricted to 10Gb/sec of bandwidth, rather than the 32Gb/sec. If you connect a modern NVMe SSD to that slower slot, it will be bottlenecked. 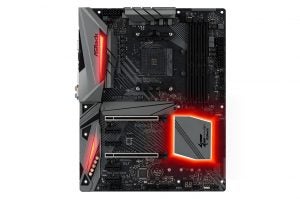 These are all small compromises that won’t affect the vast majority of mainstream builds, whether they’re for gaming or productivity. That makes them worthwhile cut-backs to keep the price down – although they’re worth noting if you’re going to want to put together a more ambitious rig in the future.

The rival MSI X470 Gaming Pro Carbon has the same memory support and the same options for M.2 connectors – one is faster, and one is slower. The MSI board has only two PCI-E x1 slots – but it does have a third, slower PCI-E x16 socket.

Elsewhere, the ASRock’s specification is more conventional. You get Gigabit Ethernet, Creative Sound Blaster audio, six SATA ports and seven fan connectors, including one for RGB LEDs and two for water-cooling hardware. MSI’s board has boosted audio and eight SATA ports, but one fewer fan connector and two more RGB LED jumpers.

You get a POST display, which is the one enthusiast feature that this board offers – and an area where the ASRock goes one better than the MSI. At the rear there are five USB 3.1 ports – two more than the MSI – and a Type-C connector. Unlike the MSI, however, there’s no Clear CMOS button, and the ASRock isn’t pricey enough to have Wi-Fi.

MSI’s board has no POST display, and its backplate connection is the same as the ASRock. When it comes to pure specification, it’s a close-run thing between the two boards: the ASRock has more PCI-E x1 connectivity, which is handy for smaller expansion cards, and it has that POST display. The MSI has a third PCI-E x1 slot and more RGB LED options. 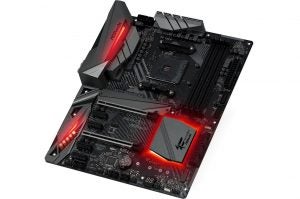 The Gaming K4 squares up to the MSI X470 Gaming Pro Carbon at the checkout, and it proved to be far more convincing than its rival in gaming benchmarks.

In Middle-earth: Shadow of Mordor, the ASRock board returned minimum and average frame rates of 64.63fps and 93.19fps. They’re actually the best in the entire group, even if the eight boards I’ve tested are naturally divided by slim gaps. The MSI’s minimum frame rate of 64.09fps isn’t bad, nor is it far behind, but its average of 91.17fps propped up the results table.

The ASRock’s impressive gaming performance wasn’t maintained in other benchmarks. Its single-core Cinebench result of 175cb is the poorest in the group – joint with the MSI B350 PC Mate, which costs half as much as this board. It was behind the MSI X470 Gaming Pro Carbon in the multi-core test.

In Geekbench, the ASRock sunk to the middle of the table, while the MSI was the best board in the whole group.

Its memory and storage scores were always better than the MSI, but they rarely topped results tables and nor were they consistent. In the NVMe test, the ASRock’s read score was poor but its write result was the second-best here. Its reasonable figures in memory bandwidth were hindered by the group’s second-worst latency result. 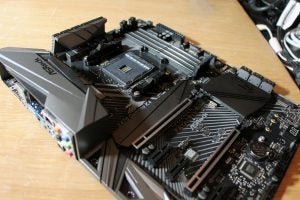 When it comes to performance, the ASRock board is certainly a better option for gaming than its nearest rival – the pricier MSI offering. However, its inconsistent results elsewhere mean that it won’t be the best option if you want top levels of performance for productivity tasks. In this respect, the MSI is better.

When it comes to the specification, there’s very little to choose between the ASRock and the MSI. The ASRock has slightly better features for practical use, while the MSI is a little flashier. Overall, both are good.

If you’re looking to build a mainstream gaming system and don’t want to spend bundles of cash on a motherboard, the ASRock is a decent option – in pure gaming benchmarks, it matches boards that cost a lot more. However, you may have to open your wallet wider if you want a board that excels in applications too.

The ASRock Fatal1ty X470 Gaming K4 is one of the fastest boards we’ve tested for gaming. But for productivity, we’d look elsewhere.