Those of you after a small, quiet and good-looking home theatre PC (HTPC) but unable to afford the lust-worthy, passively cooled Tranquil PC ixL, might want to check out this candidate from ASRock. A compact and attractive little box that’s absolutely stuffed with connections, features and powerful specifications for a price that doesn’t break the bank, the Core 100HT-BD may well be the ideal machine to go with your home cinema setup.


Highlights include a Core i3 CPU, slimline Blu-ray drive, USB 3.0 and built-in Wi-Fi in a tiny all-metal chassis, with AIWI allowing you to use your iPhone or iPod touch as a remote control, keyboard and motion-sensing game controller all in one.

While ASRock may not be the first name that springs to mind when you think of PCs, the company has a well-deserved reputation in the motherboard sector, with award-winning examples like the 890FX Deluxe showing off its design talent. Indeed, despite sporting a dual-core Intel 2.13GHz Core i3 CPU, the Core 100HT-BD resides in a nearly identical chassis to the company’s previous 195 x 186 x 70mm Atom-based ION 330 Pro. That’s an impressive achievement, especially if the Core 100HT lives up to its sub-25dB noise claims.


Its small dimensions and light 1.8kg weight (not including the external power brick) make it not only one of the most portable HTPCs around, but also one of the cutest. ASRock has constructed its machine nearly entirely from black metal with a shiny lacquer finish, which helps it to stand out visually and lends it excellent build quality – if not quite up to the brick-like ixL. If black’s not your thing, the Core 100HT is also available in white with matching white remote. 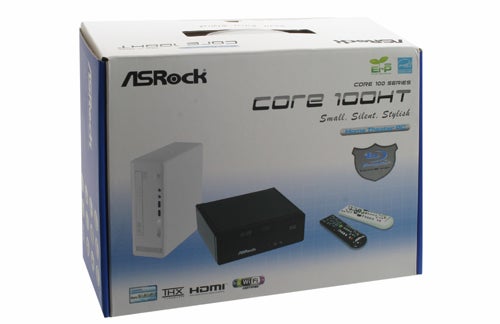 Fingerprints aren’t as much of a potential problem as on a portable device, as you’ll rarely need to touch the chassis. Since it’s glossy all around and doesn’t have rubber feet the PC’s base is quite slippery, but ASRock provides a neat little anti-slip mat that does a great job of keeping the machine perched (as)rock-solid on your surface of choice.


Unfortunately the Core 100HT-BD’s potential good looks are slightly spoiled by a busy front panel, which includes the original fascia of its Blu-ray drive, THX and ASRock logos, twin USB 3.0 ports with their signature blue connectors, and silver headphone and microphone jacks. It doesn’t exactly help matters that the attractively blue-backlit, square power button is accompanied by an orange hard drive activity indicator and green optical drive light either. Still, as far as looks go it beats machines like the DinoPC Mini Carnivore in its sleep.

Around the back you’ll find an excellent port selection for a machine this small. There are six USB 2.0 ports, a dedicated eSATA2 port, digital optical and analogue 3.5mm audio outputs for eight-channel surround sound, and both VGA and HDMI for video. ASRock has thoughtfully included an HDMI to DVI adapter in case your monitor doesn’t have the TV-centric digital connector. The HDMI output supports Dolby TrueHD and DTS-HD pass-through, and ASRock has also licensed THX TruStudio PRO technology to enhance the 100HT-BD’s audio with specialised processing.


Our only real complaint is that both USB 3.0 ports are around the front. Considering these are quite likely to host semi-permanent external storage, having the cables sticking out in plain sight is hardly the most elegant solution. On the other hand this is handy for USB 3.0 memory sticks, but we wish Asrock had managed a USB 3.0 port at the front and one around the back.

Opening the Core 100HT-BD up is a very simple process, though it does require a cross-head screwdriver. Removing two screws will allow you to slide out this miniature computer’s top panel smoothly, giving access to the optical drive cage. This in turn needs to be removed (another two screws) to get at the hard drive and memory. Everything is quite neat and there’s very little wasted space inside this case, probably thanks to ASRock’s enviable position of being able to custom-design motherboards to its own specifications. 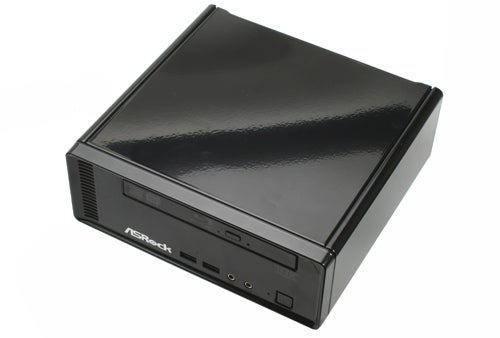 As you would expect given its tiny size, nearly all the components in the Core 100HT-BD are laptop-based. Thus both the Blu-ray drive and hard drive are of the 2.5in, low power variants. With a 500GB (albeit of the slower 5,400rpm rather than 7,200rpm variety) capacity installed you’re unlikely to run out of room any time soon, but if you did need more storage or wanted a fast SSD as your primary boot drive, there’s still room for a second 2.5in HDD and a SATA connector to spare. Nor will you have to transfer the OS in this case, as the Core 100HT doesn’t come with one as standard. Considering how easy Windows 7 or recent Linux builds are to install, it’s not much of an issue even for relative novice users.


Memory is also of the SODIMM variety and both of the HTPC’s slots are filled, but with 4GB of DDR3 on board you’re unlikely to need to upgrade any time soon. We would recommend going with a 64-bit OS to make full use of the available memory. 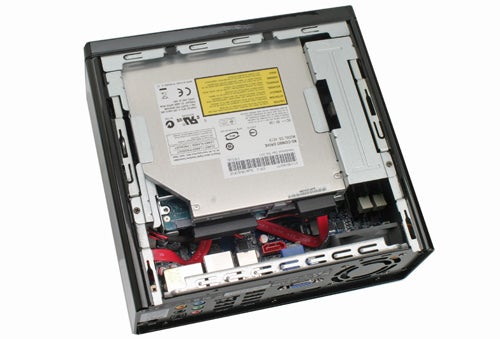 Located directly underneath the hard drive cage, the CPU is cooled by a unique low-profile contraption, with a finned tunnel leading the heat from a cooling block to a small and quiet fan at the case’s front. It’s a clever system that certainly works well in practice.


If you go for the bare-bones option of this case you can fit anything from a mobile Core i3 to Core i7 processor, but in this pre-assembled model you’re stuck with a Core i3 330M – not that that’s a bad thing though, as this dual-core CPU runs at a speedy 2.13GHz and supports hyper-threading to provide four virtual cores. While not quite up to desktop counterparts as used in the Tranquil PC ixL or DinoPC Mini Carnivore, it provides plenty of power for the most demanding home cinema enthusiast and won’t break a sweat handling an average daily workload. ASRock’s versatile BIOS also allows for some overclocking, though for most users there really won’t be any need.

Predictably, it’s Intel’s low-end graphics integrated onto the CPU that form the weakest link in this otherwise more than adequately powerful PC. They cope fine with helping the CPU in intensive video tasks, but they most certainly do not make for an even half-way decent gaming machine. At our standard test settings, the Core 100HT-BD managed an atrocious five frames per second (fps) in Call of Duty 4, which is an old and undemanding title. Even knocking the resolution down to 1,280 x 720 without anti-aliasing resulted in a still unplayable 9.2fps, and of course there’s no option to add any form of discrete graphics to this HTPC.

So far we’ve been impressed by ASRock’s Core 100HT-BD, and for its target audience the lack of gaming capabilities is unlikely to be a deal-breaker. The advantage to using low-power parts is that overall power consumption is very modest: up to 25W at idle while staying under 45W at load. These figures are similar to the Tranquil PC ixL, with slightly lower maximum usage.


This low power draw results in low heat output, which in turn means cooling can be kept to a minimum, and aside from the CPU tunnel fan there is only a small fan at the machine’s back. While idling the Core 100HT is virtually silent, and though under load its fans become audible, it’s a gentle background hum that’s rarely intrusive and fairly easy to ignore. 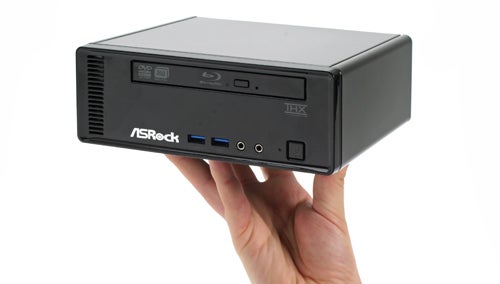 ASRock provides a Windows Media remote with its HTPC, but don’t expect too much. It’s a generic, glossy black (or white if you went for the pale version of the Core 100HT) affair with a decent layout and rubberized buttons, but these are a bit too small and occasionally stiff for ideal comfort, while the whole remote just screams ‘cheap’. At least it uses AAA batteries, so you can switch to rechargeable ones.


A more interesting control option is the AIWI link ASRock has built into its HTPC. As already mentioned, this allows you to use your iPod or iPhone as a motion-sensitive remote and keyboard for the machine, linked via Wi-Fi or Bluetooth. All it takes is a software download for both machines. Unfortunately we did not get a chance to test this functionality, and on the gaming side it is rather limited in its scope with current support from only four major game titles. However, this is set to increase dramatically, and regardless it’s a neat feature to have. 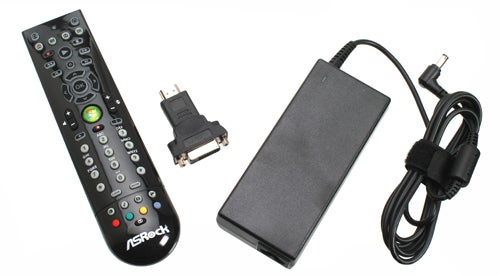 So in terms of looks, build, size and features ASRock’s smallest HTPC does an impressive job – all we could still want is a TV tuner, and that can be added using a USB dongle. But how does it hold up in the value stakes? The configuration as reviewed should set you back around £500, which seems very reasonable. Even adding on a copy of Windows 7 Home Premium, if you need it, should keep the price below £570. Of course you can get ASRock’s own dual-core Atom-based machine for less (around £340 with Blu-ray) in a similar chassis, but that will offer considerably less power and connectivity.


For a more valid comparison, the closest specification of the Dell Inspiron Zino HD costs £650, and while this does net you discrete (albeit still weak) Radeon graphics, a faster and bigger hard drive and more RAM, the Core 100HT-BD is slightly smaller, offers far better build quality, superior connectivity and – most significantly – a CPU that’s in a whole other league. Combined with its superior wireless capabilities and features such as THX and AIWI, ASRock is the clear winner. 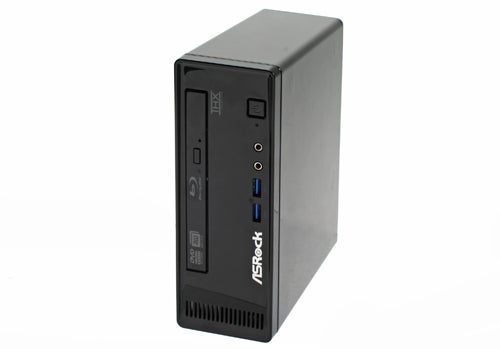 A less straightforward contender is the £550 DinoPC Mini Carnivore, which nets you more power on every front but is not nearly as good-looking, compact, frugal or quiet, and goes up to £700 if you configure it with a Blu-ray writer (the only HD optical solution offered) and Wi-Fi N. If you want to do a bit of half-way decent gaming it’s the better buy, but otherwise ASRock wins out again.


ASRock has managed to stuff all the features, connectivity and power most home cinema enthusiasts will need into its reasonably attractive little black box. The Core 100HT-BD is a nettop-sized HTPC offering desktop-like performance at a very reasonable price, and thus wins our Recommended accolade.