This is the most affordable Intel board latest batch of motherboards Trusted has tested, and its cost of £88/$113 means it’s one of only a couple that dip below three figures. That’s still ample to power most PCs, from office workhorses to solid gaming rigs.

ASRock B250 Pro4 – Design and Features

One of the biggest areas where ASRock has cut this board’s budget is the chipset. The B250 is Intel’s entry-level Kaby Lake silicon, which means a reduced set of features.

B250 still has the full BUS interface and link speed of every other Kaby Lake chipset, but it only supports 12 PCI-Express 3.0 lanes. That’s half as many as the top chipsets, and it means that you’re going to be restricted – realistically, this board will only support the CPU, a single high-end graphics card and a lone M.2 SSD. 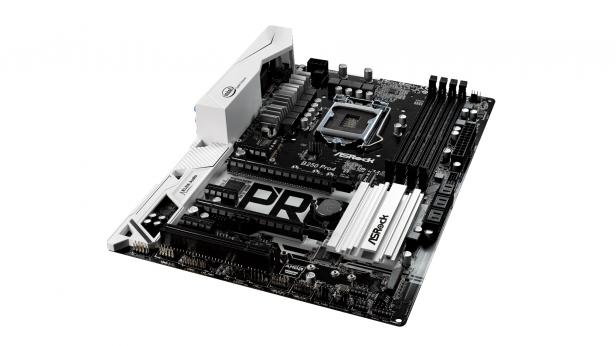 The B250 hardware supports six USB 3.0 ports – four fewer than Intel’s top chipsets – and only a single SATA Express connection. It does, however, work with new Intel Optane memory.

The modest chipset means that the most ambitious rigs aren’t compatible with this board, but that won’t be a problem for anyone who’s looking for a budget PCB – and the ASRock is fine in many important areas.

There are two PCI-Express x16 slots with the second running at 4x speed, and three PCI-Express x1 sockets. There’s even a PCI connector. All of those are good for running small expansion cards and older hardware. 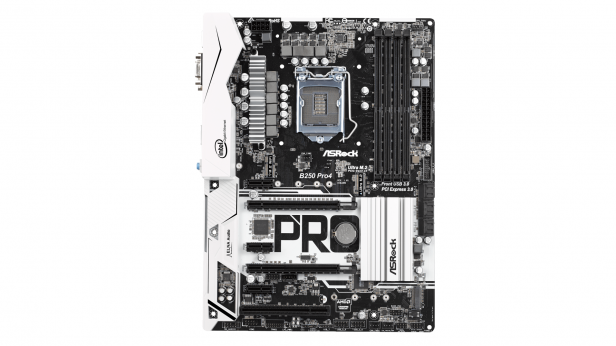 There are six SATA ports – not as many as other boards, but plenty for most people – and the chipset’s single support M.2 connection is bolstered by a third-party Ultra M.2 port. That’s an ASRock marketing term, essentially, that represents the faster PCI-Express x4 connections that are found on many modern boards now. In reality, that means you get an Ultra port that delivers 32GB/s of bandwidth, with a standard port delivering half that – so this board is on par with top-tier Intel products in that regard.

There are four DDR4 slots that support 64GB of memory, but they’re limited to 2400MHz – while some gaming boards now handle 4200MHz RAM. Audio is limited to a bog-standard Realtek chip, and networking is similarly entry-level.

The physical design is subdued, too. The heatsinks are tiny, basic metal affairs, and there’s only a small shroud covering the rear IO and audio circuits. There are only four fan headers – most boards have five – and none of the headers at the bottom of the board are protected with plastic or colour-coded. Unsurprisingly, there are no buttons or POST displays for tweaking, and no RGB LEDs.

The rear IO is inconsistent, too. It has three USB ports and a type-C connector, but they’re all USB 3.0 rather than USB 3.1. There are also only three audio jacks, and no optical S/PDIF output or Wi-Fi. 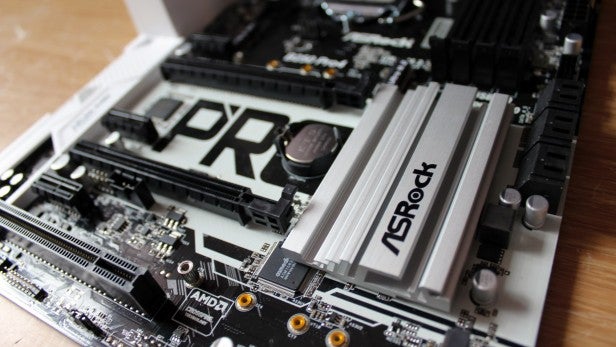 There are a few things missing, then, but that’s entirely expected for a board at this price – and the missing features won’t impede on affordable builds.

This is one of the most affordable boards I’ve seen lately, so I expected the ASRock to be a poor performer in benchmarks – but in some tests, this product defied those expectations.

Its score of 6828 in the 3D Mark test falls into the top half of the recent Intel motherboards, and is only a couple of dozen points behind the top gaming boards. The margins are tiny enough to not make a significant difference to gameplay, and it means this board is punching above its weight.

It did this while consuming less power than most rivals, too – at peak the ASRock required 96W, while many other Intel boards demand more than 100W when their CPUs were stress-tested.

In other areas the ASRock was more ordinary. Its Geekbench 4 single-core result of 5598 is three hundred points behind the best boards, and its multi-core pace of 18,983 isn’t much better. It managed mediocre results in CrystalDiskMark, too – it couldn’t write the test SSD at beyond 500MB/s, while many other boards can. 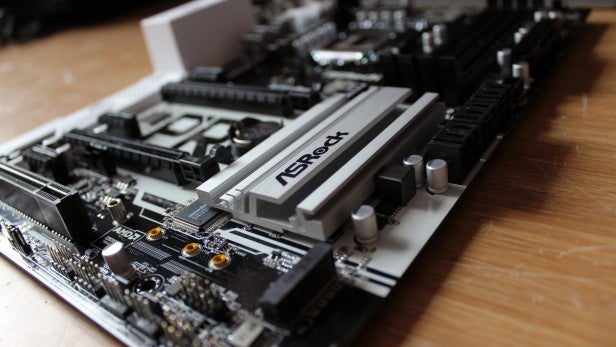 It’s a mixed bag, but the bottom line is that this board is not truly slow in any department – and that its clear performance strength lies in gaming.

ASRock’s board doesn’t have a huge range of features or a particularly generous chipset, but it does have enough going for it to tackle a wide range of scenarios – it’s equally comfortable inside a budget home or office rig as it is inside an affordable gaming system.

Its benchmarks support that assertion. It’s not the fastest in applications, but it’s perfectly adequate, and its Fire Strike score was able to compete with pricier products.

It won’t break any speed records or deliver an overwhelming slate of features, but this is an excellent budget offering, and certainly worth considering if you want to build an affordable Intel-based machine.

ASRock’s board has a cut-down chipset and a middling set of features, but it’s enough to build all sorts of affordable and mid-range rigs – especially considering its price. It’s not a bad performer, too, especially when it comes to gaming and power consumption.