The Arylic A50 is idiosyncratic, but represents considerable value. In terms of audio performance, it sits somewhere above most of the current crop of wireless Bluetooth all-in-ones, but below what a full size hi-fi amp might offer at twice the price.

It may be tiny, but the Arylic A50 digital stereo amplifier isn’t short of functionality. It’s built for Wi-Fi and Bluetooth, comes multi-room ready, and is DNLA /UPnP compatible.

But given Arylic is hardly a household name, just what can you expect from this esoteric box of tricks?

Size isn’t everything, they say. But that might not be strictly true of the Arylic 50 hi-fi amplifier. The fact that this diminutive box of tricks is almost unfeasibly small is central to its appeal. It will take next to no room on your AV shelf, providing an inconspicuous hub for wireless and wired sources.

It measures just 120 x 110 x 40mm, not least because it employs an outboard power supply that’s almost the same size. The aluminium chassis may not win any design accolades, but it’s robustly built. 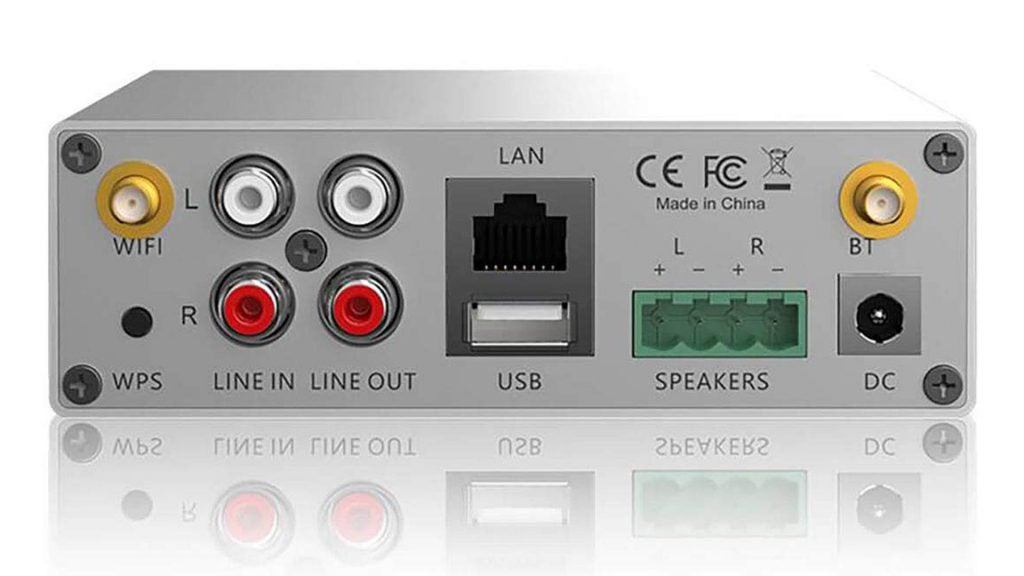 The front panel is blank bar some Arylic branding, leaving only a blinking LED to communicate intent. Rear-mounted Bluetooth and Wi-Fi (here in a 4.2 iteration) aerials provide the wireless backbone.

There’s also a stereo phono input, stereo pre-out (should you want to use the amp with a pair of active speakers, or connect to a larger amplifier), USB and an Ethernet port, should you opt to hardwire to your network. Speakers are connected via plug-in Phoenix terminal-strip connectors.

The fact that there isn’t an optical digital audio input is disappointing, though: the unit is small enough to be tucked behind a flatscreen TV and it would have been an interesting alternative to a soundbar.

For this audition, we partnered the amplifier with a pair of Q Acoustic Concept 20 bookshelf speakers.

Although intended to be driven by the 4Stream app (for iOS and Android), the A50 ships with a conventional remote control for those who prefer to wave a wand to switch sources.

Initial setup, as managed by the 4Stream app, proves quick and painless – we didn’t feel the need to use the WPS pairing button. 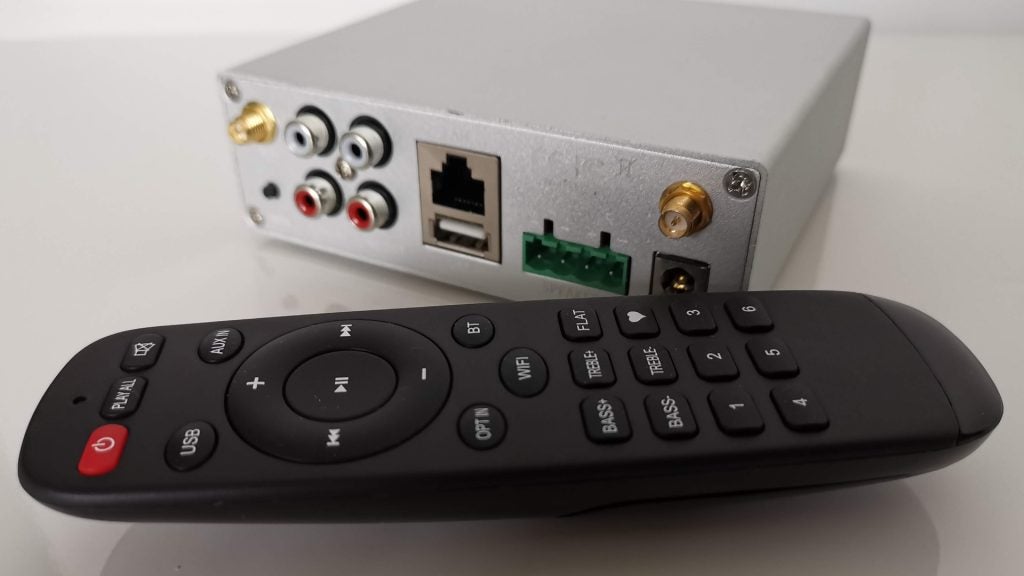 The app supports a wide range of music services including TuneIn, Spotify, Tidal, Napster, Qobuz and Deezer. There’s also support for AirPlay. You can leave the amp with its default ID, or rename it to something friendlier.

Rather irritatingly, you have to repeat the set-up procedure should the unit lose power. It isn’t smart enough to automatically reconnect to any network it’s been previously parked on – a convenience we’ve become accustomed to with Amazon Echos and their ilk.

Multi-room is the final feature nicety. Buy multiple A50s and you can group them together to form a whole home multi-room audio system. Alternatively, pop an Arylic Cobblestone speaker into a spare room, bedroom or den and stream to that.

Arylic A50 performance – This feisty performer is good for parties

Despite its modest price point, the A50 is a feisty performer; good for parties, it’s the sonic equivalent of Ouzo. It may be diminutive, but that doesn’t stop it from getting rowdy.

Any fear is that this low-cost amp might be monaural quickly proves unfounded. The A50 impresses with clear stereo separation. Given a little help from our resident Q Acoustics speakers, it created a soundstage that was wide and deep.

High You Are (the Branchez remix) by What So Not plays to the A50’s strengths. It’s a punchy, vivacious dance track with a whippy metallic treble and an electronic trance beat that drops deep, reassuring us that the A50 isn’t a lightweight when it comes to dishing out club anthems. 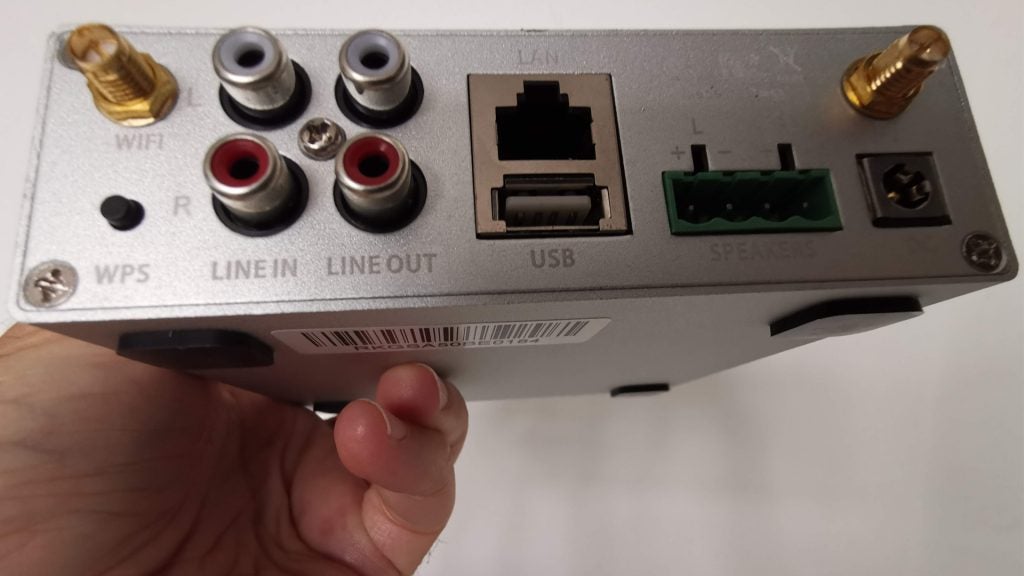 Charlemagne by Blossoms, from their self-titled debut album, enjoys similar attributes. There’s a throbbing bass line that sits a respectable distance below the poppy chorus and synthy doodles. Detail is impressive.

The A50’s somewhat surgical approach works with other genres, too. The buzz saw riffing on Welsh rabble-rousers Funeral for a Friend’s Streetcar could cut logs. The noise may not be refined, but your toes will ache from tapping.

And therein lies the A50’s appeal. Sure, there’s digital artifice to its sound – this amp is never going to be described as warm – but when you’re rocking out to Fell in Love with a Girl, by The White Stripes, that isn’t much of a concern.

The A50 DAC is unspecified but 24-bit 192kHz capable, with good file support that includes FLAC, WAV, APE, AAC and MP3. So should we class this amp as High Res Audio? 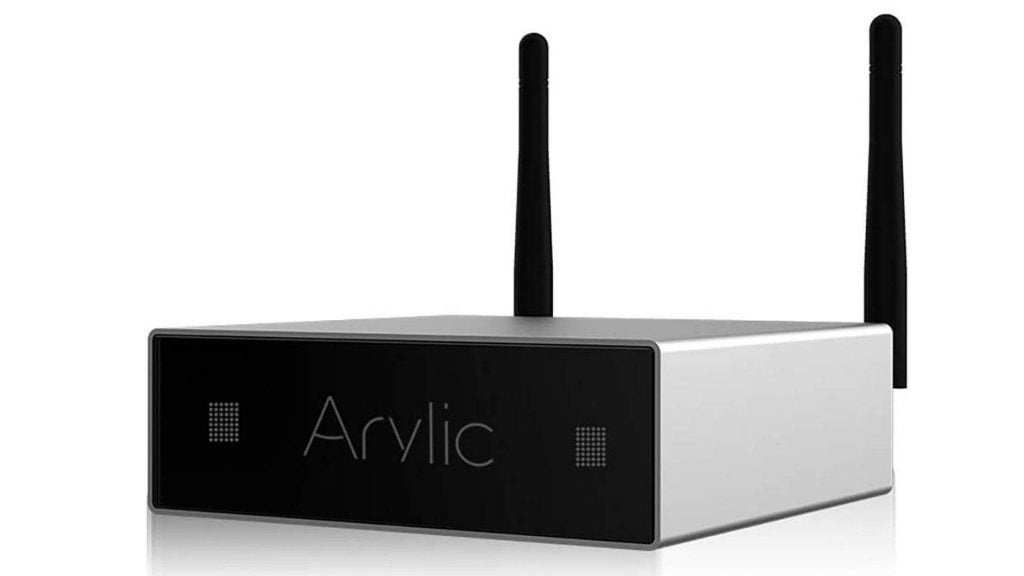 Herbie Hancock’s Chameleon, a 24-bit FLAC file played from USB, tries hard to convince that the A50 has the wherewithal to handle high-res – but I’m not entirely buying it. The amp lacks high-res musicality. That said, there’s no arguing with the clarity of the track. This classic instrumental, with its jazzy noodles and funky bassline, images well.

The A50 struggles to untangle some of the knottier melodies, in Ghost’s Helvetesfonster, an instrumental with lyrical piano, wandering synth and languorous drums. This complex, multi-layered track by the Swedish rockers has tempo changes a go-go. While the A50 is a little out of its depth here when it comes to spatial resolution, there’s still enough poke to give the rhythm welcome attack.

Power output is rated at 50w x 2 into 8-ohms, which seems a little optimistic. Not a volume monster then, but it’s certainly loud enough to entertain the average living room.

Should you buy the Arylic A50?

The Arylic A50 is idiosyncratic, but represents considerable value. In terms of audio performance, it sits somewhere above most of the current crop of wireless Bluetooth all-in-ones (albeit without their all-in-one convenience), but below what a full-size hi-fi amp might offer at twice the price, at least.

With its compact form factor and frugal connectivity, it obviously isn’t going to appeal to traditional audiophiles. However, like Liam Neeson in Taken, it has a specific set of skills.

We don’t imagine that the potential audience for this little box is purely residential, either. It’s easy to imagine it finding employment in a small coffee shop or bar, where its rugged build quality will find an appreciative audience.

The A50 wears its binary amplification on its sleeve, but has plenty of verve and pronounced channel separation. For the money, it’s a bit of a steal.