Available on Xbox 360 and PS3 (reviewed)

Why? That was the big question on your reviewer’s mind as he booted Army of Two: The Devil’s Cartel for the first time. Are there really enough people out there who loved the deeply mediocre Army of Two and Army of Two: The 40th Day to make it worth spewing out a third one? Well, with The Devil’s Cartel even EA doesn’t seem to really have been sure. This is a cut-back, stripped-down Army of Two that’s clearly been built on a budget. Oddly, it’s also the best in the series – though to be honest that’s not saying much.

The Best? Seriously? Well, with The Devil’s Cartel, EA has dispensed with any pretensions of class the series might have ever had. The plot is so generic as to be virtually non-existent, and the charmless bozos of the first two games aren’t even the stars this time, having been replaced by two bozos so incredibly charmless that they appear to have strayed in from a Limp Bizkit concert circa 1999. 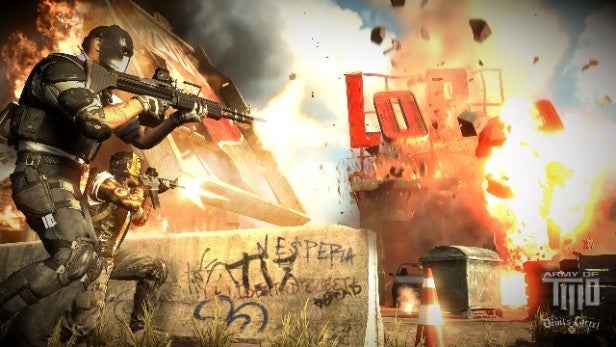 Fans of fist-bumps, frat-house repartee and mindless violence will be glad to know that such things have been ramped up. In fact, they’ve been ramped up to a degree where it’s either deliberate self-parody, or someone really needs to get out more. We’re honestly not sure which.

Now, Army of Two has always had some nice mechanics, primarily aimed at co-op play. Some of the more complex shielding and back-to-back moves appear to have been ditched for The Devil’s Cartel, and there’s slightly less emphasis on the old core one: Aggro. Basically, Army of Two plays like a Gears of War-style cover shooter, but here it’s less about hiding, popping up and blasting, than about blasting the enemy to build up ‘aggro’ so that they concentrate their fire on you, allowing your partner to move up the battlefield and attack. They, then, politely do the same for you.

Aggro is still a part of The Devil’s Cartel, but not such a major part. You’ll need it in specific situations, but it’s more a case of fighting at the same time as the other player (or a CPU-controlled partner) than working in tandem throughout. 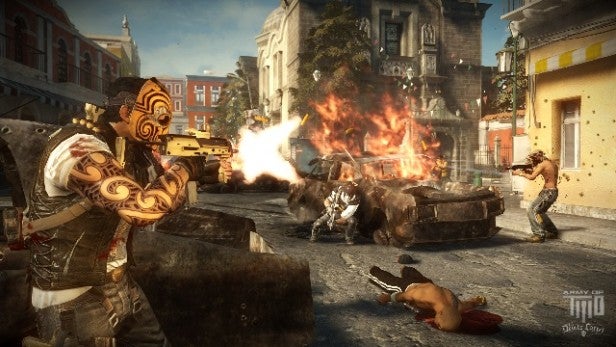 If The Devil’s Cartel has junked some of Army of Two’s fundamentals, then the good news is that it adds something more exciting to fill the space. This is Overkill. As you blast your way through wave after wave of baddies, you build up an Overkill meter. Wait until it fills, click the L2 trigger, and suddenly you and your partner flip to a mode where you’re invulnerable and can dish out ridiculous amounts of damage.

This by itself wouldn’t be so great, were it not for the fact that Army of Two has moved to the FrostBite 2 engine. The visual effect isn’t totally convincing, with pop-in textures and some rather plain scenery in the PS3 version we played our way through. Worse still, character models seem to extend to roughly half-a-dozen enemies, repeated ad nauseum.

However, it’s all rather nicely lit, and FrostBite 2 supports some impressive destructible scenery. At all times there are crates, barrels and various exploding canisters that can be blasted into chunks, but hit Overkill mode and you’ll find yourself tearing chunks out of the concrete, ripping through walls and spreading debris everywhere you shoot. It’s great. Everytime you engage Overkill you’re left with a big smile on your face. It’s responsible for at least one point on the score for this review.

Next
Design, Value and Verdict Review