An extremely bright and powerful light, the Arlo Floodlight doubles as a security camera and convenience/security lamp. Thanks to its 2K resolution, this camera is capable of shooting some of the best quality video going, with full-colour night vision. Cloud activity zones and smart alerts help reduce the number of notifications that you get, but the high price and base station requirement may put this model out of reach for some.

Certainly the best wireless camera system, Arlo continues to push and evolve what its system can do. With the Arlo Floodlight, you now get a full-on battery-powered security light and camera combination to add into the mix.

Incredible video quality shot at a 2K resolution and a super-bright light make this one of the best of its kind but there’s a rather steep price to get over.

Arlo Floodlight – What you need to know

With the wide light to either side of the camera, the Arlo Floodlight is the hammerhead shark of the security camera world. Internally, the camera is an Arlo Pro 3, but the design has been tweaked beyond the addition of the light panels.

As the floodlight draws a lot more power, the Floodlight ships with the Extended battery, so there’s a slightly elongated case (218 x 191 x 78mm). There’s more weight to this model, too, so the simple magnetic and screw mounts of previous Arlo cameras are gone, and the Floodlight has a fixed ball mount that attaches to a faceplate that has to be screwed to a wall. 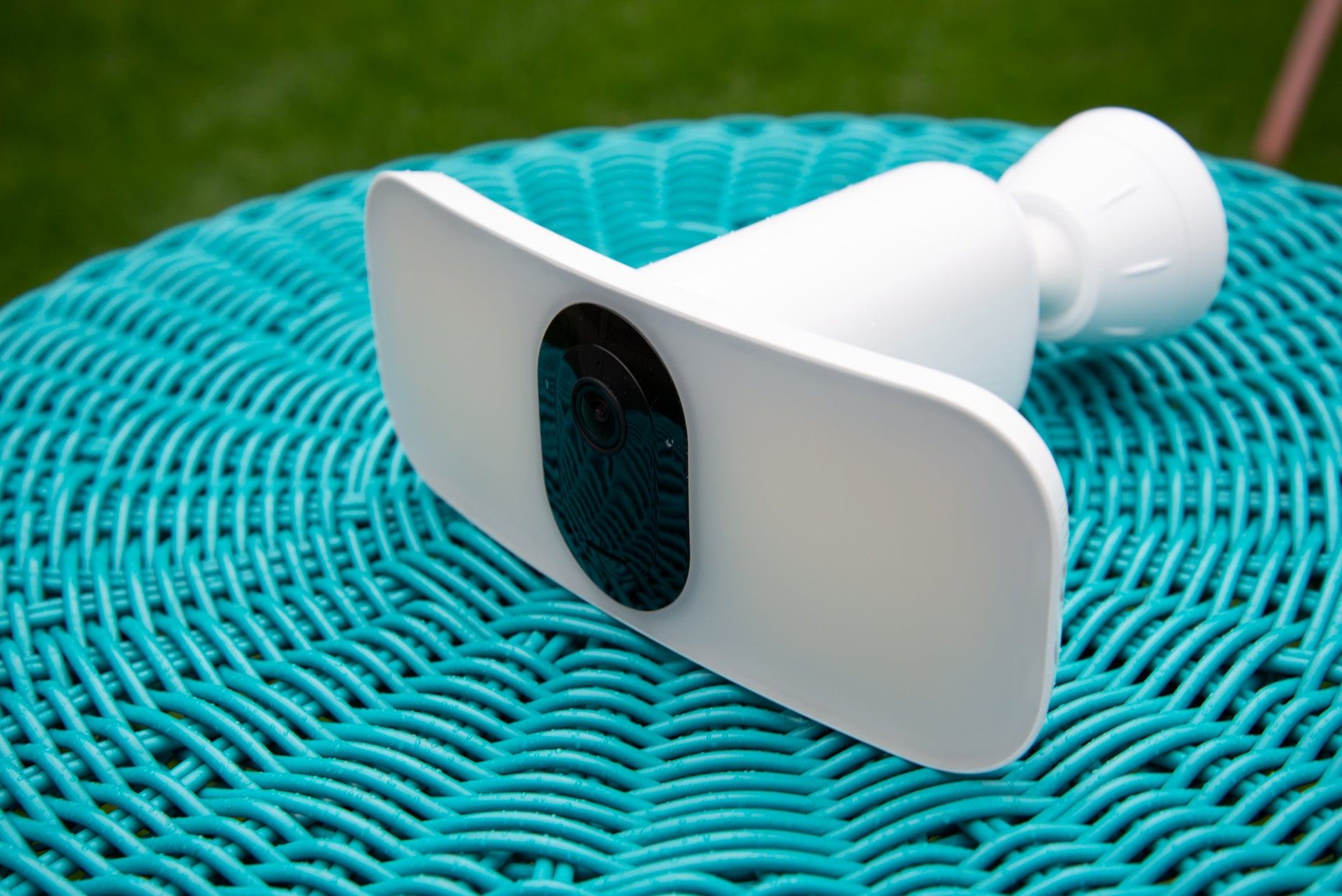 It shouldn’t take more than around 10 minutes to get the faceplate attached and, as the camera is wireless, you don’t have to worry about getting power to it. For security, there’s a retaining screw that keeps the camera in place.

Arlo has used a very flexible mount, so it’s easy to get the camera lined up and pointing in the direction that you want. The new design does have some charging challenges, though.

With the Arlo Pro 3 and Arlo 4K cameras, there’s a magnetic charging dock: when the camera is almost out of battery, you grab the camera and charge it through this. With the Arlo Floodlight, that fixed stand means it’s harder to get the entire unit it.

Instead, you eject the internal part of the camera, which brings the main camera and battery out. This section has a Micro USB connector on it for charging, although you could use a dedicated Arlo battery charger instead. 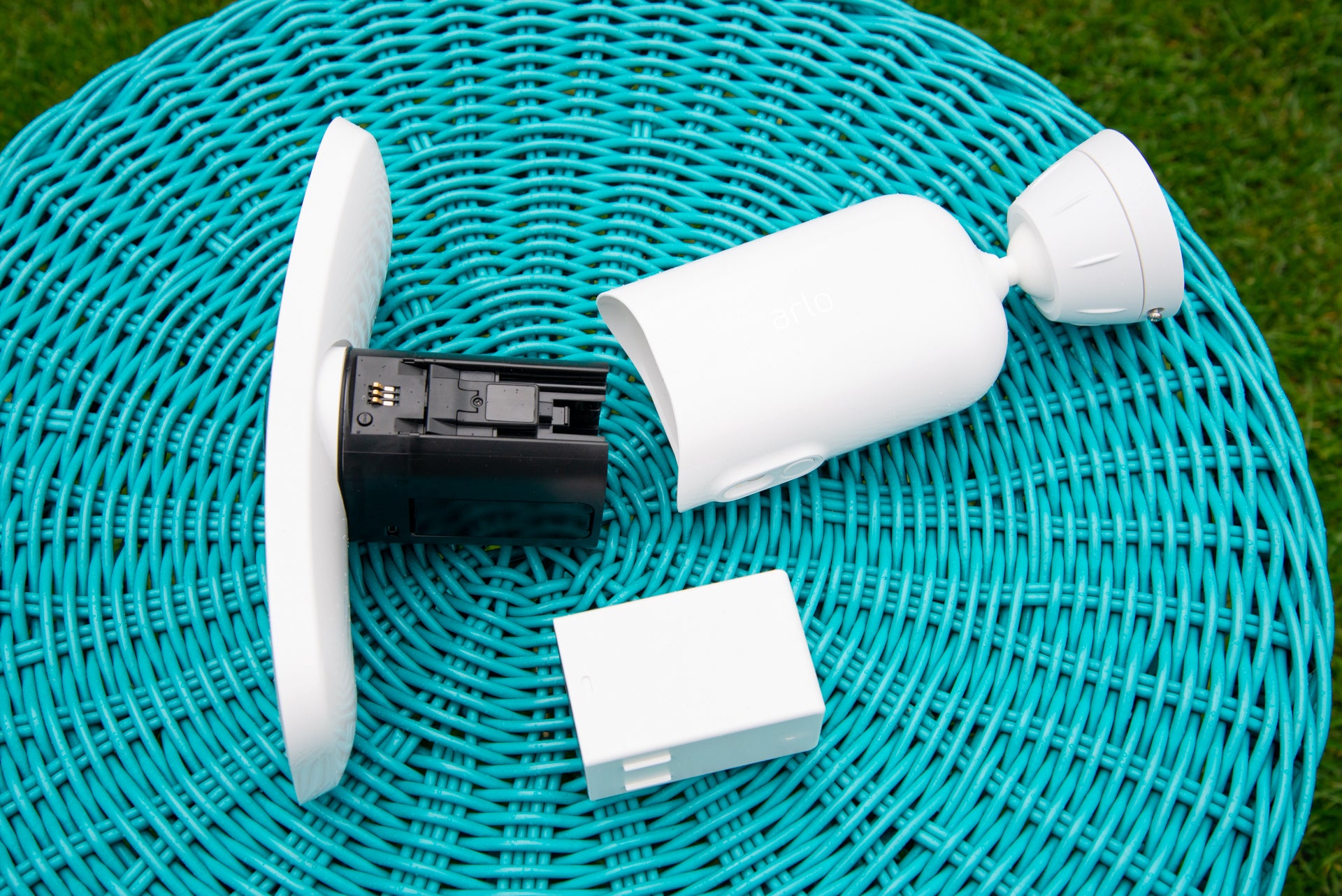 You still get the magnetic charging connector on the main camera body, which remains in place when you take out the battery section. This can be used with accessories, such as the solar charger or for providing mains power if you need it.

You need to have a compatible Arlo base station to add the Floodlight camera. This can be the Pro 3 or 4K base stations, and there’s no option to connect this camera directly to your Wi-Fi. As such, this really is a camera upgrade for people that have an existing Arlo system.

Adding the camera in via the app, is easy enough, with step-by-step instructions on how to set up and install the Floodlight. Once added into the app, the camera appears on the home page, showing a recent thumbnail video. You can tap to view the live feed, and use the two-way talk option to have a conversation with anyone that you can see. As with previous Arlo cameras, the microphone inside is loud and clear enough for people to understand you, and the microphone makes it easy to hear what’s being said back. You can also trigger the internal siren, which is loud enough to warn someone that they’re being watched but far from security-system loud.

To make the most of the Floodlight, you need to have an Arlo Smart subscription, which gets you 30 days of video history, stored at the camera’s 2K resolution. It’s £2.49 per month for a single camera, although you may be able to save with the £7.99 a month plan that covers five cameras; it’s a shame that there’s not an unlimited option, as you get with Nest Aware or Ring Protect.

Footage is saved to the cloud when motion is detected. In common with other battery-powered models, the Floodlight has a low-power PIR motion sensor that wakes the camera up before starting to record video. This can result in a lot of notifications.

With an Arlo Smart subscription, you get Cloud Activity Zones, which lets you draw the areas on-screen that you want to monitor, and then you only get notifications when motion happens in these zones. You can further suppress notifications by using Smart Notifications, getting pop-up messages for your choice of people, vehicles and animals. Even with these options, you should be careful where the Floodlight camera is pointing. If it looks at a busy road, then the PIR motion sensor will keep waking it up, even if a recording is suppressed by an activity zone.

Footage recorded to the cloud is available in the Library section of the app. Each event has a thumbnail video, and you can filter by device, date, and event type (people, animal, other motion). These options make it really easy to find the clip you’re after, and you can save all footage to your phone to preserve evidence. The camera’s floodlight is also triggered by the PIR motion sensor, although there’s a Dusk to Dawn Sensor embedded, so you only get light when it’s dark. The default settings are pretty good, although you can adjust the light sensitivity if you want to change when the light is operational. You can also turn the light on manually and adjust its brightness.

Arlo quotes the light with a 3000-lumens brightness, although I should point out that this is only when the camera is plugged in using an outdoor charging cable; on battery power alone, the camera operates at 2000-lumens maximum, but to preserve the battery life, the brightness slider is set to 70% brightness.

How bright is it? Well, even at 70% on battery power, the light is bright enough to dazzle and was more than enough to fill up my front garden. I’d say that this camera is as good as, if not better than, many security lights. 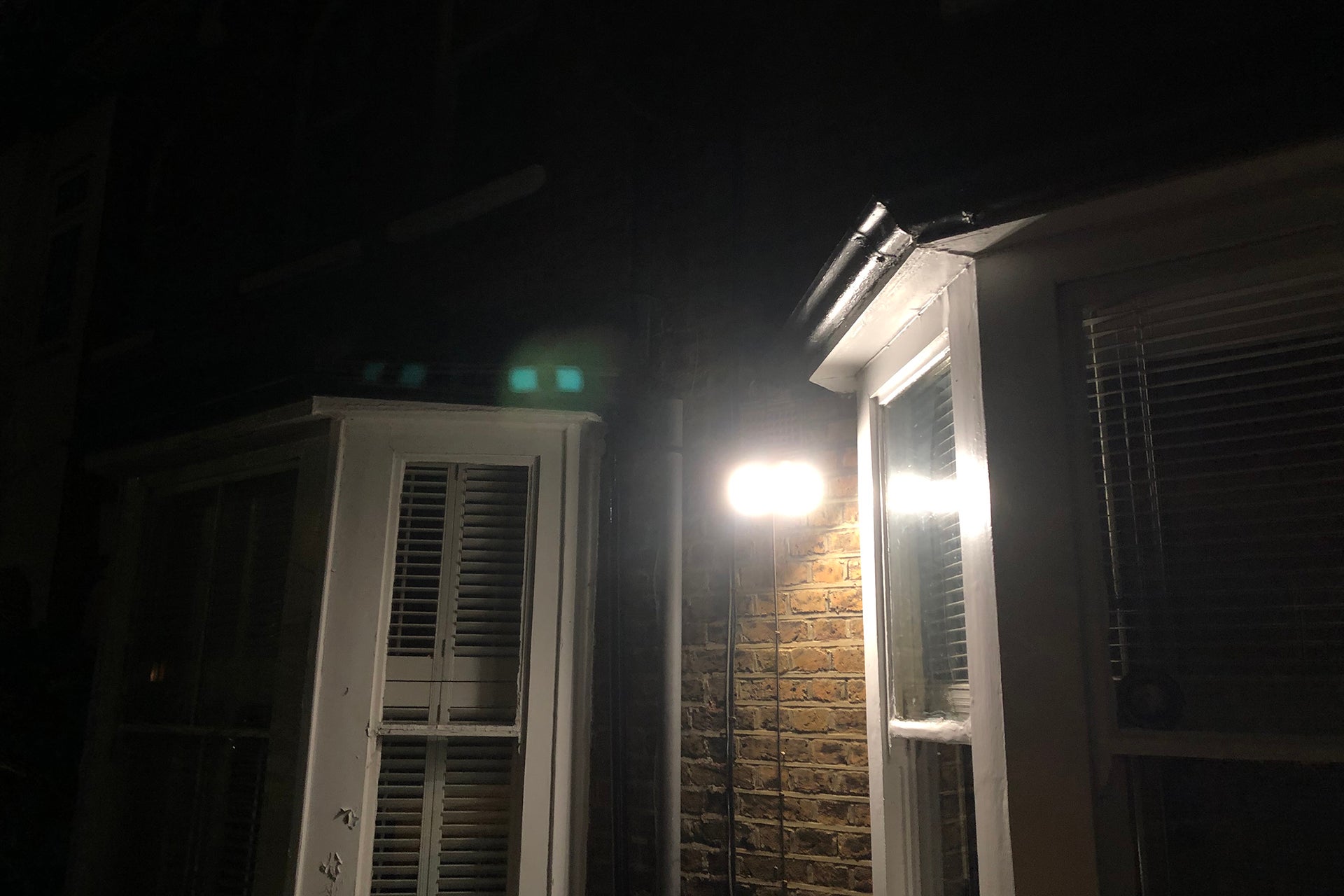 You can choose to have the light pulsate, rather than come on at a constant brightness. It draws attention to the camera, but it’s a bit annoying if you’re using the Floodlight as a convenience light.

What makes Arlo one of the best systems is its powerful Modes. These control when and which cameras are recording. At the most basic, you can simple arm or disarm a base station. There are more powerful controls, too. Geofencing lets you turn on cameras when you go out and off when you get home. You can also create your own modes, say having one where outside cameras are on and inside ones are off. 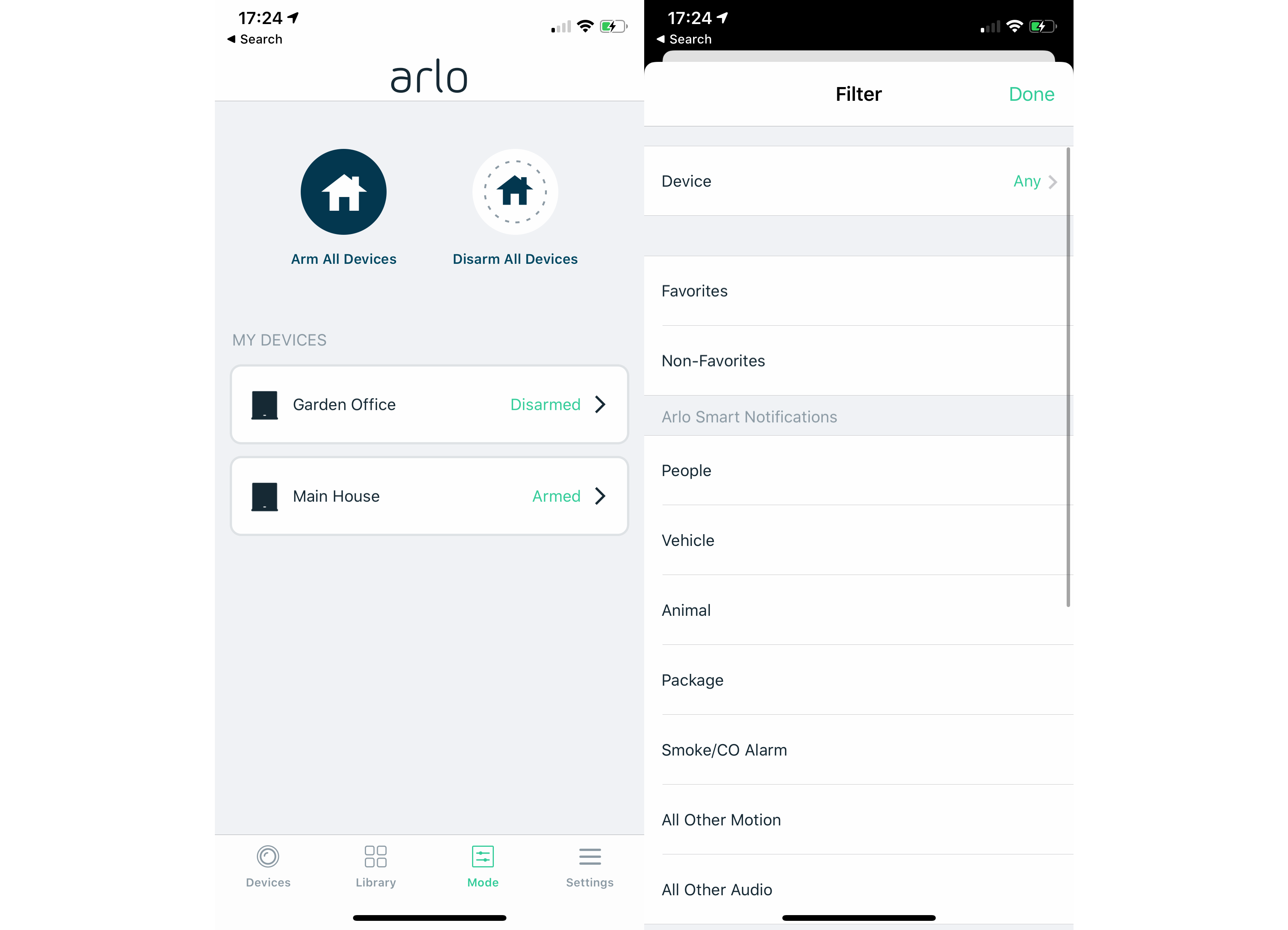 Schedules let you choose when modes are activated. And, you can mix and match with geofencing, running your schedule when you’re home and having everything turned on when you’re out. By far, Arlo is the most powerful and flexible system when it comes to camera control.

Apple HomeKit support is available, but this doesn’t let you set modes and only lets you view the footage from the Floodlight camera. Currently, there’s no support for HomeKit Secure Video on this model, presumably because Arlo wants you to have to pay for its cloud storage.

Amazon Alexa control is available, and the smart hubs appear as devices, so you can arm and disarm the system with your voice, provided that you’ve set a PIN in the Alexa app. You can’t access custom modes, however. If you have a smart display, you can view the camera feeds.

Google Assistant support is far more limited, as you can only stream a camera’s feed to a Chromecast or smart display. You can’t change the system mode this way.

Video quality – Better than HD video recording out of the box

Thanks to the HDR, 2K resolution (2560 x 1440), the Arlo Floodlight has more resolution than the vast majority of security cameras. This pays dividends. During the day, the footage from the camera is well exposed, with plenty of detail through the frame. Looking at the sample below, you can see exactly what’s going on and people are easy to identify. 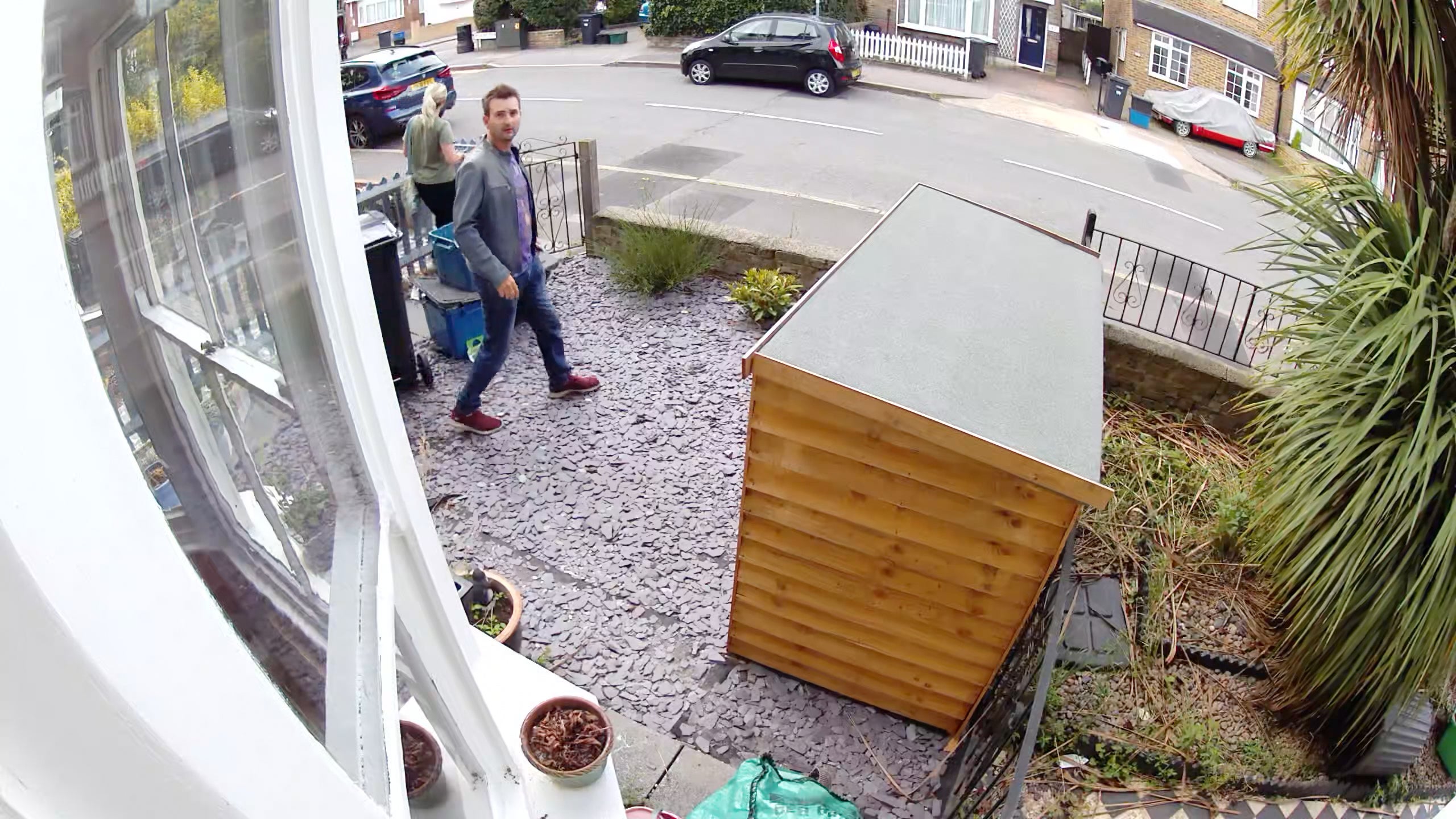 At night, when the Floodlight is triggered, you get an additional burst of light. Now, the Arlo camera is capable of shooting in colour at night, but the brightness of the floodlight boosts the quality of the final picture.

There’s a touch more softness to the image, and the image drops off with less visibility, but the quality is still quite amazing, and it’s very easy to see exactly what’s going on. Plus, for yourself, you get a light to highlight an area, making it easier to find your keys to go through the front door, for example. 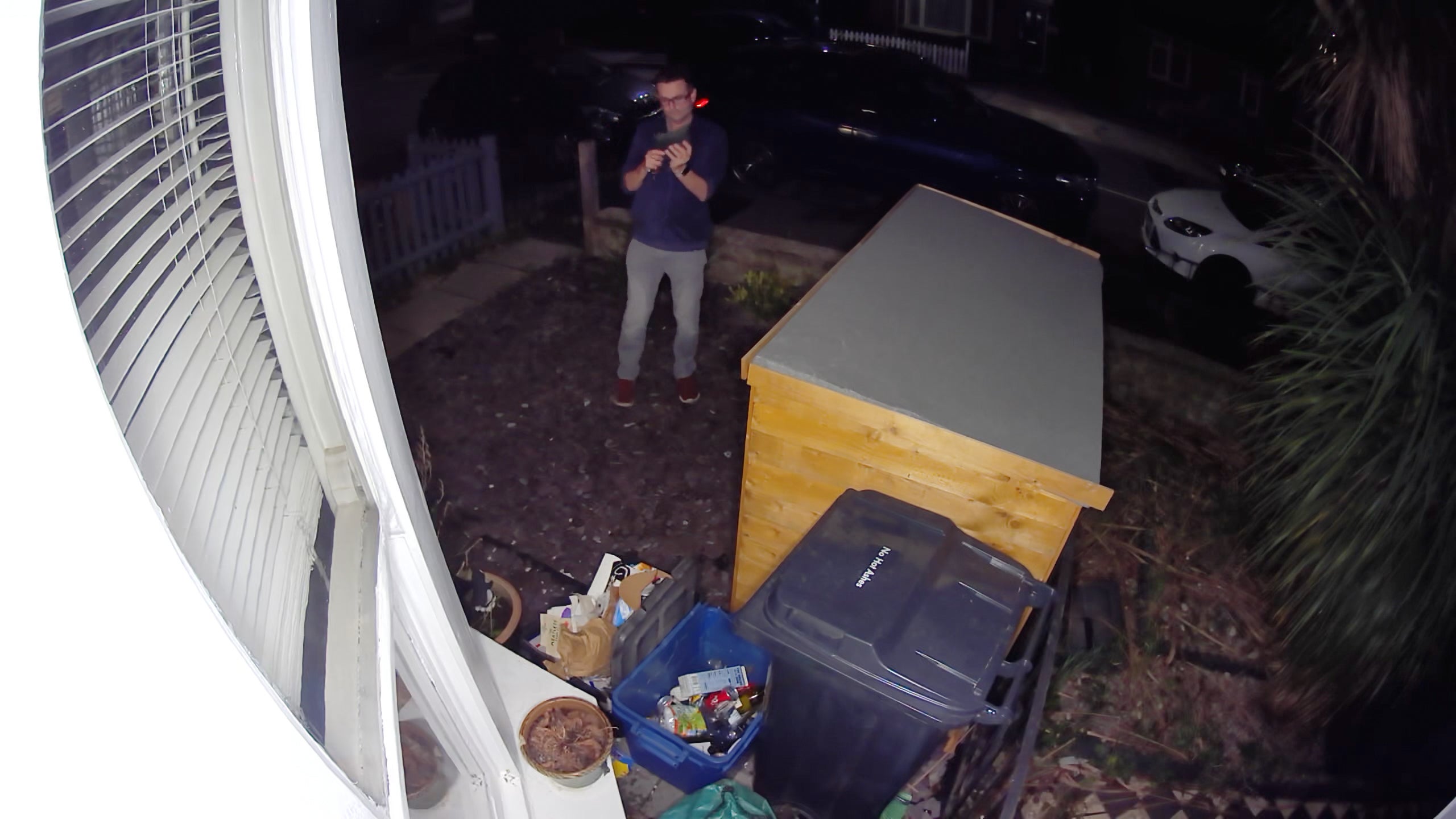 Arlo claims six-months of battery life for this product, although that will depend on the settings you use and how often the camera is triggered. My camera use around 1% of battery charge per day, so I’d get closer to three months of use out of it.

Should you buy the Arlo Floodlight?

While the Arlo Pro 3 has a handy spotlight for drawing attention to itself and boosting nighttime shooting, the Floodlight is another step up. If you’ve got a poorly lit outside area, then the Arlo Floodlight doubles up a security and convenience light, too.

The main competition is from Ring, which has the Floodlight Cam and the Spotlight Cam. I think that the Floodlight Cam is better in the wired version, which makes it slightly less flexible to install than the Arlo Floodlight. If you go for the Ring Spotlight Cam, then you’ve got a battery-powered rival. Ring’s camera isn’t quite as bright but is bright enough for most jobs.

Arlo leads on image quality, though, with Ring sticking with Full HD resolutions. And, while Arlo has activity zones on its battery-powered products, Ring doesn’t, which can lead to an overload of notifications if you’re not careful.

Ultimately, the choice will likely come down to the systems you have already. If you’ve got Ring cameras or a doorbell, then Ring’s cameras make a lot of sense, particularly if you have a Ring Alarm.

If you don’t fit into that category, then Arlo is the best wireless system without a doubt, and the Floodlight is a fantastic addition to the range. The main downside is that it’s quite expensive and requires a base station, so it’s only worth buying if you’re going to add extra Arlo cameras into the mix.