What is Arkham Horror?

Arkham Horror is a cooperative board game for 1-8 players produced by Fantasy Flight Games. Chaosium published the first edition back in 1987, while the game in its current form arrived in 2005. Since then, it’s remained relatively unchanged, with a range of expansions and other Lovecraftian games joining it in Fantasy Flight’s roster.

Players take on the role of investigators in Lovecraft’s famous Massachusetts town, as one of the Ancient Ones stirs in its slumber. Each turn, a gate to another world opens and a monster is spawned. Players must traverse the different regions of the board, having encounters, combatting monsters, and attempting to enter the gates.

Upon entering a gate, the player is transported to another world, where they must have two encounters before returning to Arkham and passing a skill check to close the gate. Each time a gate opens, a token is added to the Ancient One’s ‘doom track’. If the track is ever filled up, the Ancient One awakens, and the players must combat it directly in order to win. If all gates are closed, the players win.

That’s the basic premise of the game – but once you’re in it, you’ll soon discover that there’s far more going on. This is definitely a sophisticated game that will take some time to get into, but it offers a huge range of potential rewards and great replay value. Let’s take a closer look… 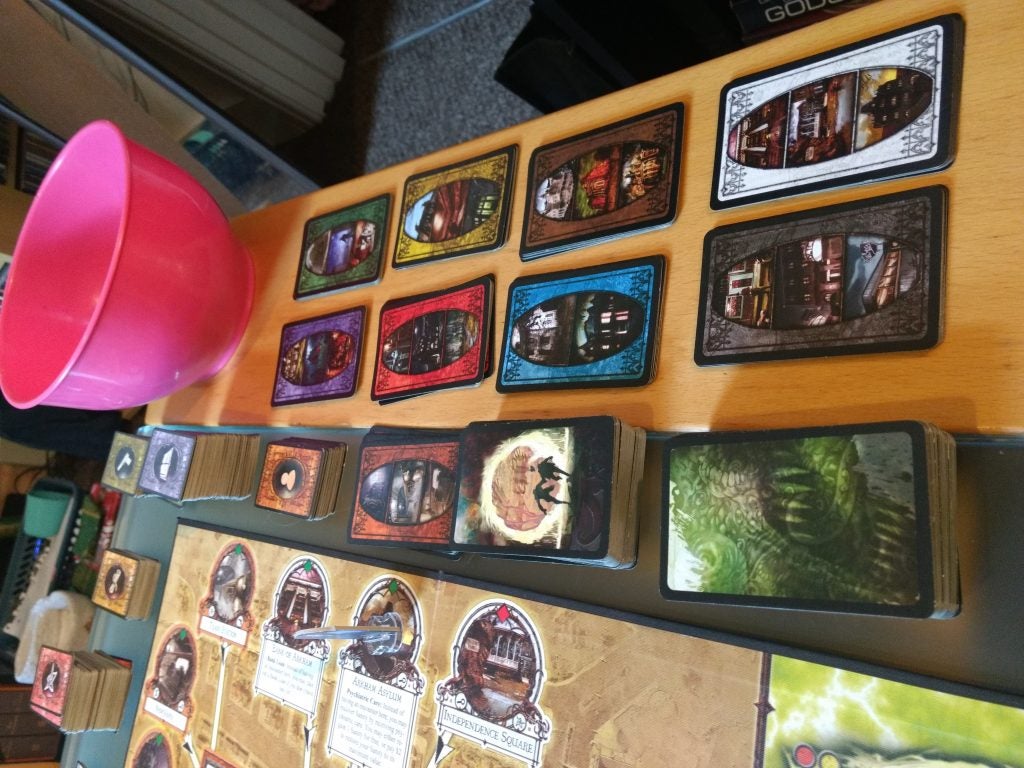 Arkham Horror – What do you get?

On first inspection Arkham’s box feels satisfyingly heavy, implying there are lots of components inside. This proves to be correct. The core game alone features 403 cards and 315 tokens and markers of varying sorts, plus 16 character sheets and tokens for the different investigators, and 16 Ancient One cards.

The board itself is made of thick, sturdy card that should stand up to multiple gaming sessions. The various cards are of similar good quality, and stand up well to regular shuffling.

The rulebook is 24 pages, but at around the same size as the box, there’s plenty of info crammed inside. It’s nice and easy to read, and comes with an index and quick reference sheet – although the content itself could be slightly better organised (as we’ll discuss later).

One slight complaint is that Arkham’s box isn’t brilliantly designed. Although there are spaces in the plastic tray for the various decks of cards, it can take a bit of fiddling to get them all to fit when packing up. Adding further frustrating is the lack of dedicated storage for the various tokens or markers. You’re expected to just dump them all in the centre of the box, which makes setting up future games rather annoying.

I’d recommend investing in a few zip-lock bags – or something similar – to keep your tokens organised – this will dramatically improve set-up time and gameplay. Trust me, the last thing you want to be doing during a heated game is rummaging through the box for a specific token! 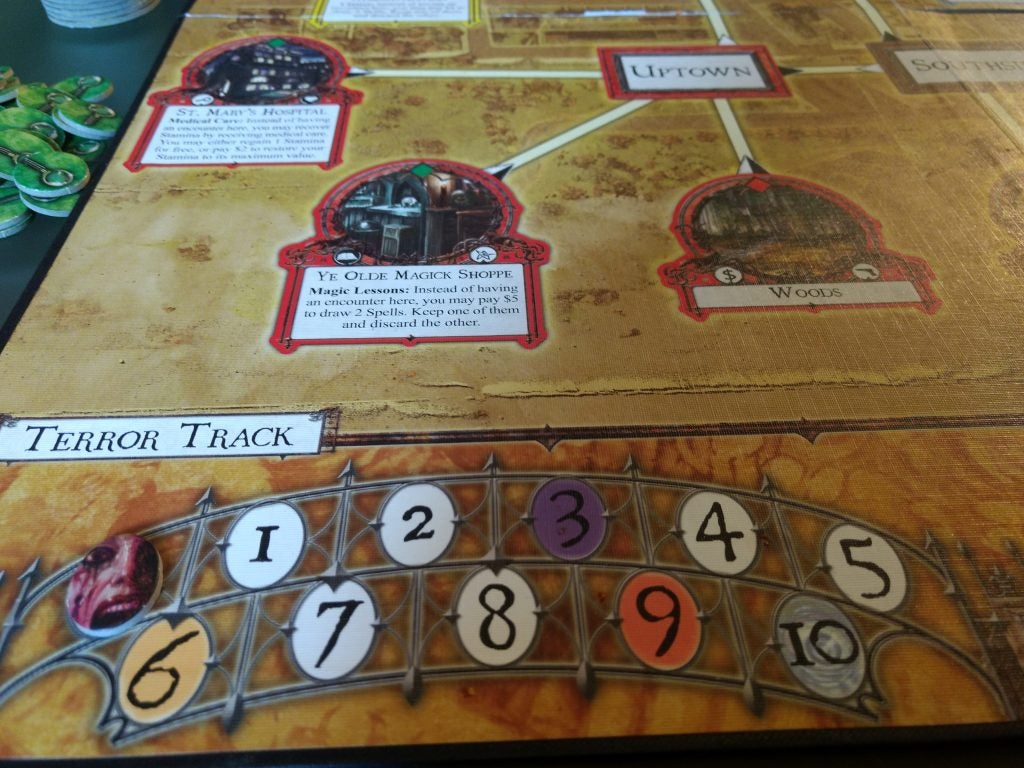 Arkham Horror – How fun is it?

For the most part, setting up the game is quite simple. Lay out the board, place clue tokens on the designated areas, organise the different decks of cards, create your monster cup (a bright pink mixing bowl in my case!), select an Ancient One, and begin character creation.

One of the most fun parts of Arkham Horror is the sheer amount of Lovecraftian lore crammed into the game. Even the most basic elements of the game feature both subtle and direct references to the mythology created by Lovecraft and his successors.

Each investigator comes with a suitably dark back story on the reverse of their card. The available Ancient Ones range from old favourites such as Cthulhu, Nyarlathotep (who has an especially cool mechanic for representing his various forms on the board) and Yog-Sothoth, to lesser-known horrors such as Ithaqua and Yig – which will no doubt trigger debate among hardcore fans about the value of the Derleth mythos, but that’s a topic for another article….

The encounter cards for both Arkham and otherworldly locations offer a similarly rich narrative, with lots of allusions to classic mythos tales and characters.

As we touched on in our recent board games roundup, Arkham has something of a mixed reputation among board game aficionados for its complexity and lengthy play time. Having played Arkham regularly for a number of years now, I’d say that while there’s definitely a learning curve involved, this is primarily due to a slightly confusing rulebook.

Although the initial breakdown of the box’s contents, setup and core mechanics is straightforward, it then proceeds to a very bare-bones overview of the turn sequence, before running through a selection of the more advanced rules. The result is that there’s a lot of flipping back and forth mid-game, which can quickly become frustrating. Organising the rules by their exact order in the turn sequence would have been far more effective. 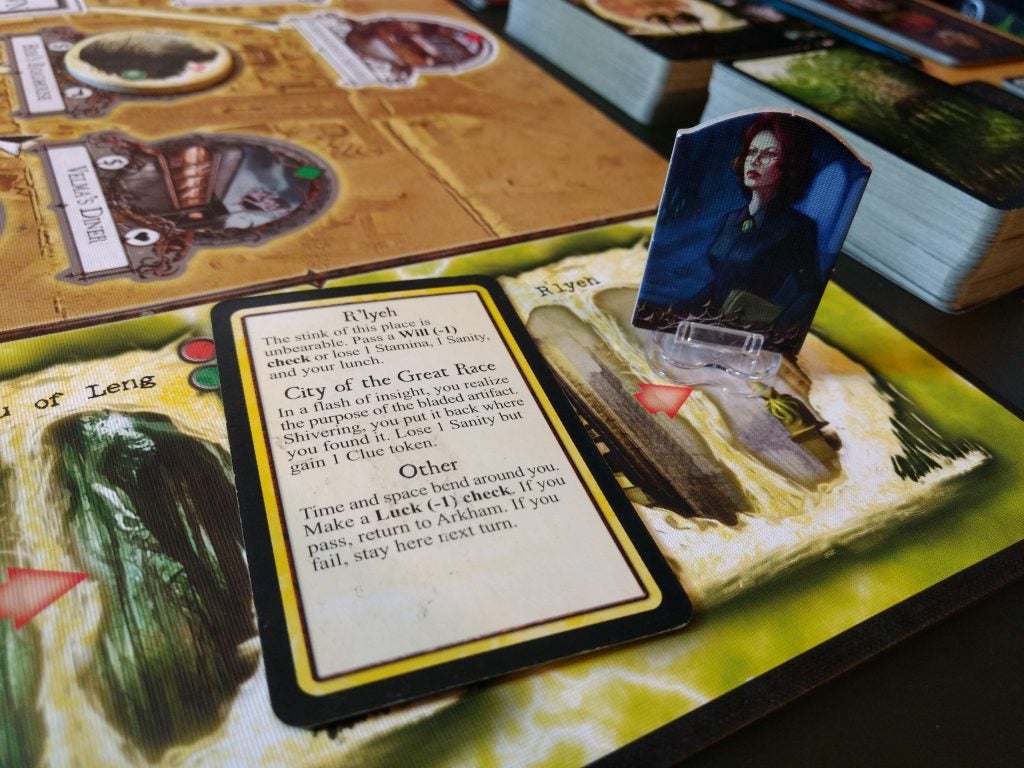 Furthermore, certain mechanics aren’t explained as clearly as they could be. While a little common sense usually resolves things, it’s a good idea to have Fantasy Flight’s own errata/FAQ to hand.

However, once you get comfortable with the turn sequence, Arkham Horror has lots to offer. Indeed, when introducing new players to the game, I’ve generally found the most effective approach is to just talk them through the first few turns, explaining the more sophisticated rules on an as-needed basis. Pretty much everyone I’ve played with over the years has picked up on the rules fairly quickly this way.

The range of characters and Ancient Ones in the core game alone means the game varies considerably from session to session, both in terms of difficulty and encounters. Furthermore, the game changes significantly when you add more than two players. Although the game labels itself as being for 1-8 players, it really comes alive with four or more players.

With two players, both investigators will generally have to focus on closing gates as quickly as possible in order to beat the doom track. However, this means certain characters won’t get the chance to utilise their abilities to their greatest extent. For example, the Archaeologist’s ability to draw three rather than two items from the unique item deck at the Curiosity Shop is an extremely effective way of gathering Elder Signs (magical items that can be used to automatically close gates and lower the doom track), but this relies on him having the time to search the shop, potentially over several turns.

With two players, this would prove impractical, but if other players are able to focus on keeping gates closed, such strategies become more feasible. This way, coordination between the different characters becomes the key to victory. This is something that becomes much easier as players become comfortable with the rules and the different investigators’ advantages and disadvantages. It takes time, but it’s definitely worth it.

If you’re hungry for more, I can recommend the various expansions Fantasy Flight have released for Arkham over the years. These add new characters, new Ancient Ones and whole new areas of the Cthulhu Mythos universe to explore. My personal favourite would be the King in Yellow expansion, in which players must win the game before the titular play reaches completion and engulfs the town in madness. 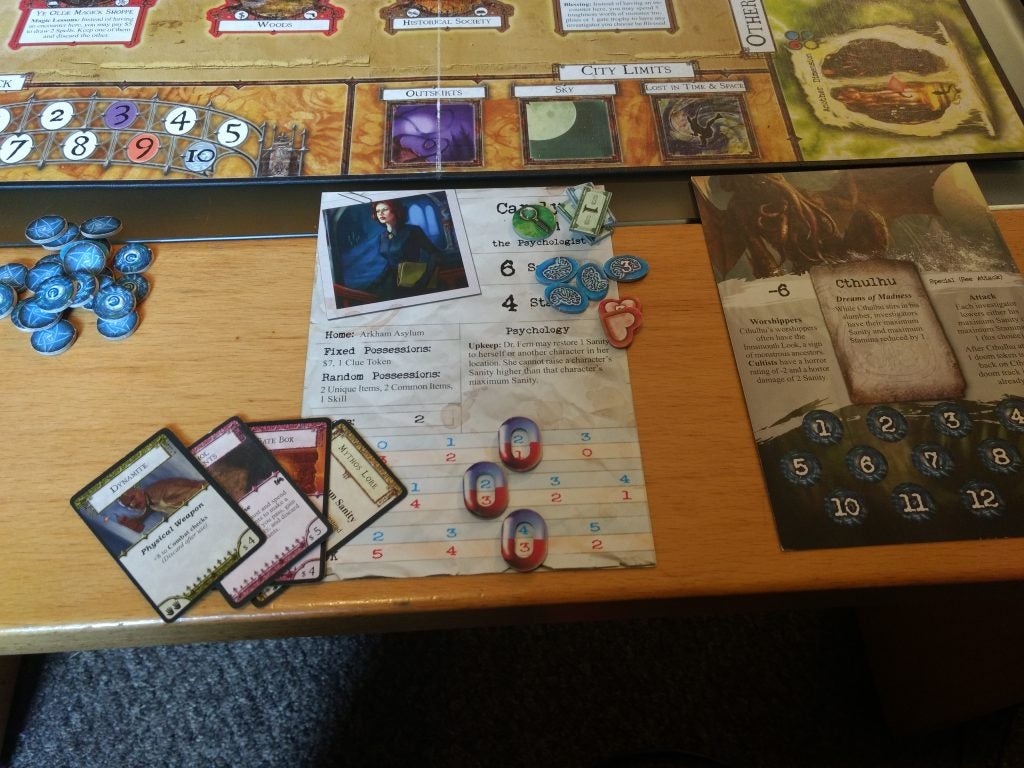 If you’re a Lovecraft fan, you’ll definitely want to check out Arkham Horror for the chance to explore mythos lore in board game format. Bear in mind, though, it isn’t just for weird fiction buffs. If you’re looking for a challenge, or enjoy the opportunity to spend a few hours immersing yourself in a game with friends, Arkham is definitely one of the best.

However, if you like the concept but would prefer a faster, more streamlined game, consider Fantasy Flight’s other key Lovecraftian title, Elder Sign.