The Arka Book may be one of the most affordable laptops you can currently buy, but it's frustratingly slow performance makes simple tasks such as opening YouTube and Google Docs a frustrating process, meaning all but the most casual web browsers are best off looking elsewhere. But with an ultra-portable design and decent display, the Arka Book still represents a decent bargain if you're happy to stick to the basics.

Search for a ‘budget laptop’ and you’ll likely be presented with a list of options that cost upwards of £500, which still feels excessively expensive for a device you only need for web browsing and video streaming. The Arka Book is an exception, costing an incredibly cheap £149 at launch.

The Arka Book is a new eBay-exclusive laptop made by Tactus, running on Windows 10 in S Mode while featuring an 11.6-inch Full HD display and Chromebook-level performance. You also get a year’s subscription of Microsoft Office 365 bundled in for added value.

With no renowned manufacturer attached such as Dell, Lenovo or HP, it’s likely alarm bells are already ringing as you ask yourself, “what’s the catch?” Well, there is a catch in that the Arka Book offers one of the weakest performances available in a laptop, often leading to frustratingly sluggish loading times.

But otherwise, this is an interesting device given it has such a low price. If you’ve got a very tight budget and only need a laptop for basic tasks, the Arka Book is still worth considering.

The Arka Book is a tiny laptop. While 13-inch screens are generally thought of as being the smallest option in the laptop world, Tactus has whacked on a diminutive 11.6-inch panel here. I don’t think that’s a negative though, as I still found it sizeable enough for Netflix and social media.

If anything, the smaller size helps make it more portable, as you can stick it in a handbag or small rucksack. It’s also incredibly light at 1kg, allowing me to effortlessly pick it up with one hand. 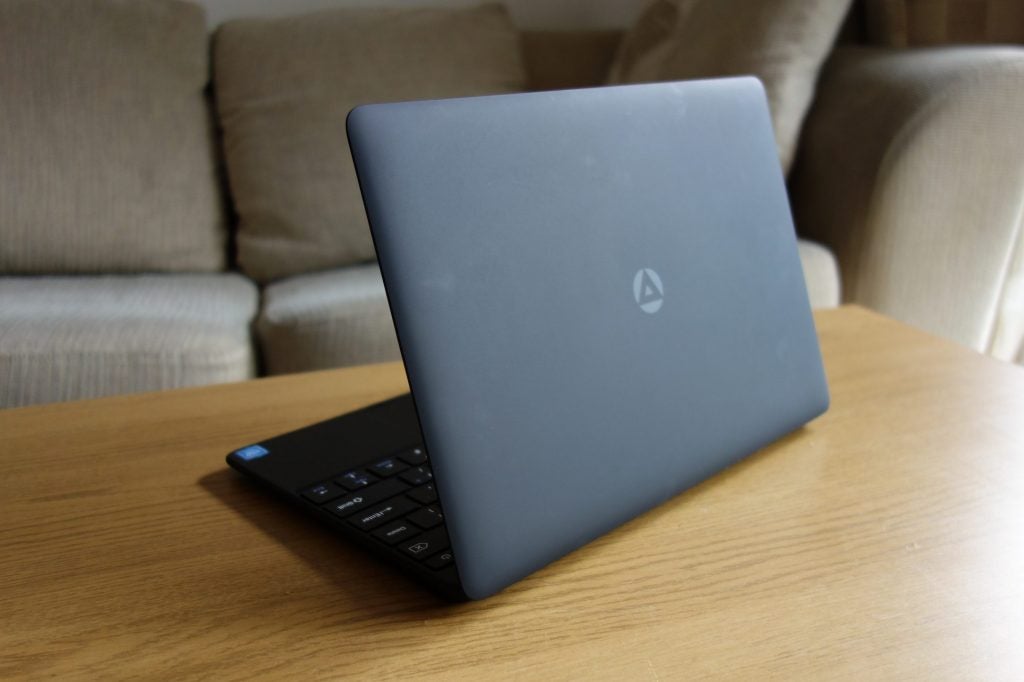 The Arka Book is largely made up of plastic, while the lid feels noticeably rubbery. It may lack the classy metal finish of more premium laptops, but the Arka Book still feels and looks far more sophisticated than the clunky plastic Chromebooks that once dominated PC World shelves.

It’s worth noting that this laptop lacks a touchscreen and 360-hinge, and so is not a 2-in-1 device like many similarly priced Chromebooks. However, the hinge sees an alarming amount of flex when pushed back with relatively little force, which makes me worry it could be snapped off if given to an inquisitive toddler. 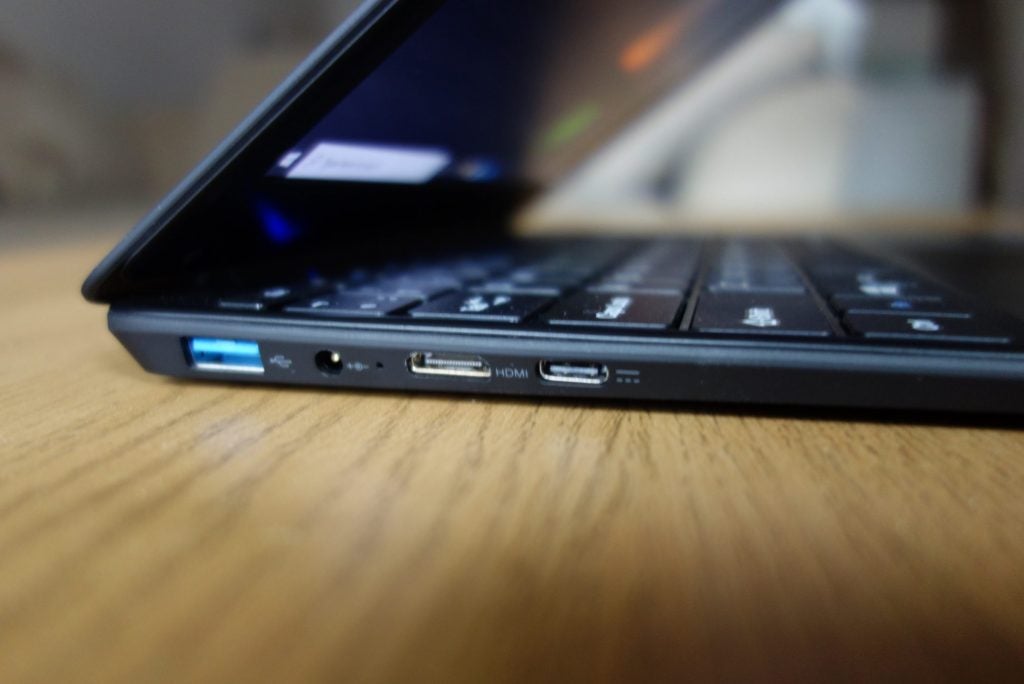 The one area I’m really impressed with the Arka Book is its offering of ports, with 2x USB-A, micro– HDMI, USB-C, Micro SD card slot and a headphone jack all featuring. There’s unfortunately no Thunderbolt 3 support here, but that can be forgiven since the laptop’s so cheap.

The down-firing speakers are unfortunately pretty poor, with Spotify tunes suffering a tinny quality and a screechy bass. I’d recommend donning a pair of headphones if you’re going to listen to music or stream video.

You also get a 0.3 MP front-facing webcam, but the capture quality is really poor since it maxes out at 360p. It’s okay for video chatting with friends or family sporadically, but I wouldn’t recommend it for professional purposes.

Arka Book keyboard – Unremarkable, but gets the job done

The Arka Book keyboard is better than I expected for a device so cheap. The keys feel cheap and make a rackety noise while I’m typing, but there’s enough travel and feedback here to ensure a comfortable experience.

Secondary functions for keys are clearly labelled in blue, making it easier for young children or computer novices to quickly get to grips with the device. The likes of the ‘Enter’ and arrow keys are unfortunately squashed down, but that was a necessity since this is such a tiny laptop. 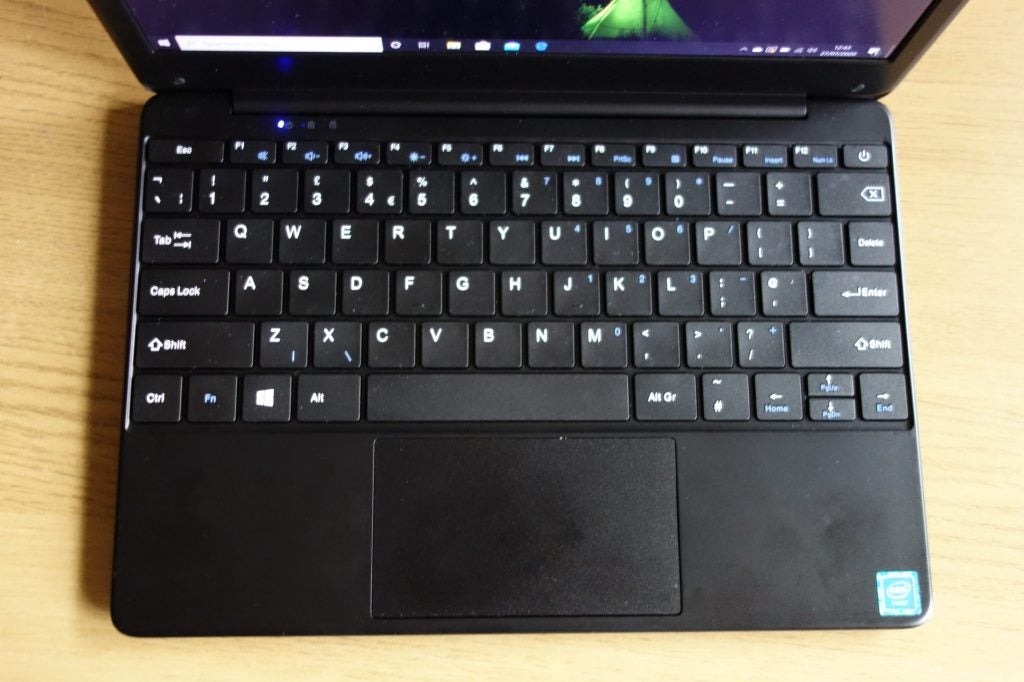 And while it’s a shame there’s no keyboard backlight here, it shouldn’t be an issue if you avoid using the laptop in dark rooms.

I’m not a big fan of the trackpad, lacking the precision found with more expensive laptops. It can sometimes be a pain trying to highlight or right-click a sentence in Google Docs, although the sluggish processing speeds don’t help matters.

Budget laptops are renowned for having poor screens, with cheaper panels being an obvious area for manufacturers to save costs. To my surprise though, Tactus has opted for an 11.6-inch IPS panel with a Full HD resolution, and it looks rather lovely.

The display isn’t going to win any awards, but images look detailed with a clear distinction between colours. Brightness could be a little higher, but I never had an issue with sun glare in bright environments. Contrast is respectable at 1068:1 too. 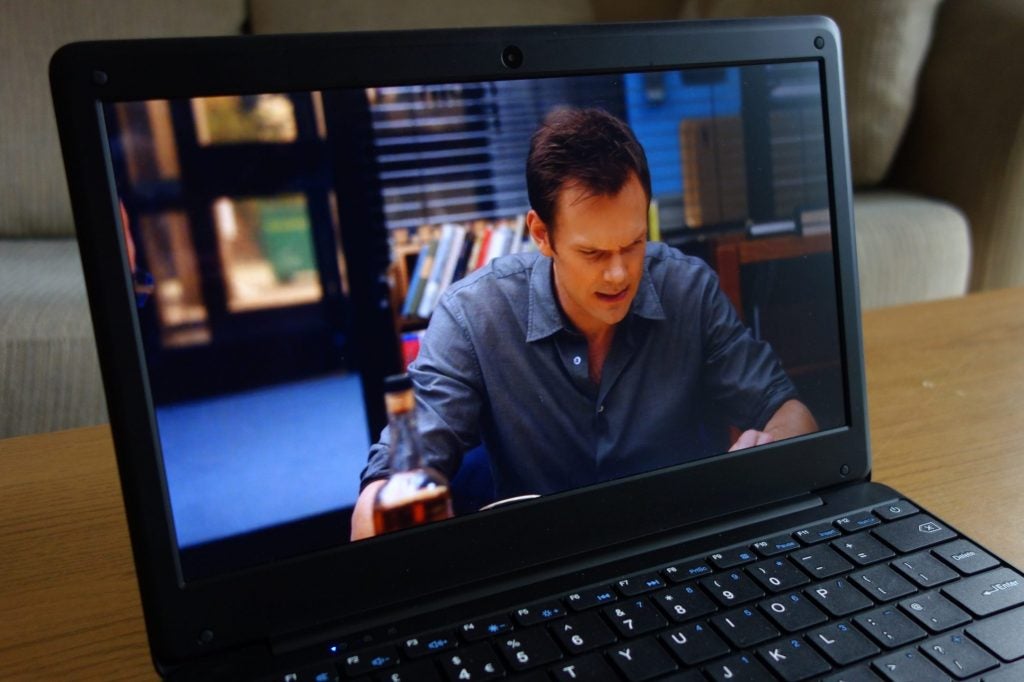 For social media and video streaming, this laptop display is perfectly fine. Colours aren’t very accurate, but that’s only really an issue for professionals, and this laptop is certainly not aimed at them.

It’s a shame that the Arka Book doesn’t have a touchscreen, but the omission is understandable with Tactus keen to cut costs as much as possible.

Arka Book performance – Frustratingly slow, even with the basics

The Arka Book features an Intel Celeron Dual Core processor and 4GB RAM, which is effectively a Chromebook-equivalent performance. Instead of using Chrome OS however, the Arka Book runs on Windows 10 in S mode, which is a stripped down, app-focused version of Microsoft’s famous operating system. I’m not a huge fan of Windows 10 in S mode, as it restricts what software you can download and the app library isn’t quite as deep as Google’s.

Microsoft gives the option of upgrading to full-fat Windows, but I can’t stress enough that you should avoid doing this. While upgrading will allow you to download software outside of Microsoft’s app store, it will have significant consequences to the performance which is already sluggish as it is.

The Arka Book is built to be a laptop that sticks exclusively to basic tasks such as web browsing, video streaming and running apps such as Netflix and Spotify, but the device unfortunately even struggles with these workloads. 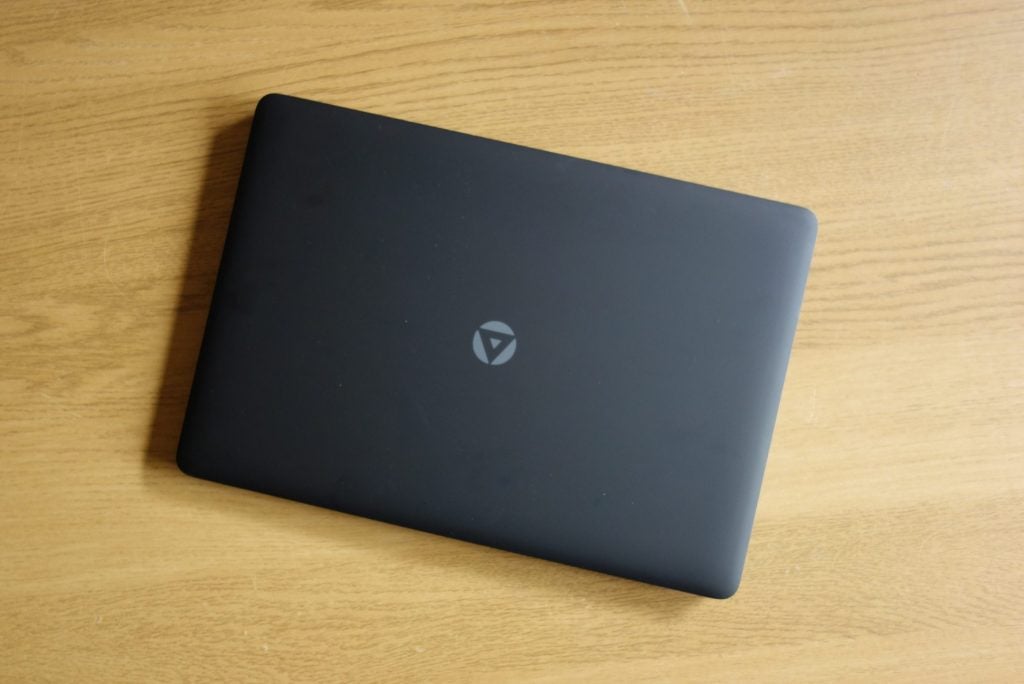 Simple processes such as opening a web browser or application can take a few seconds longer than it typically takes with other laptops. That may not sound like a lot on paper, but in practice it adds up and gets frustratingly very quickly. Opening picture- or video- heavy sites can even cause the web browser to crash, making it very difficult to access the likes of YouTube.

To keep the device running at an acceptable level, you’ll need to make sure you stick to one browser tab at a time, and try to stick to word-heavy articles such as BBC News and Trusted Reviews. For university students who need to conduct research and write up essays, while playing the likes of Spotify, the Arka Book’s shoddy performance will feel anti-productive. I’d only recommend this device for casual users and young school children.

With a tiny 64GB SSD storage capacity, you’ll also want to make use of online services such as the cloud rather than storing data locally. That means using the likes of Google Drive and OneDrive for word applications, and streaming services for video and music.

The Arka Book has a claimed 14-hour battery life on its eBay page, but our benchmark results show it’s nowhere near as good as this with real-world use.

After turning the brightness down to 150 nits and looping a video, the Arka Book only lasted 5 hours and 14 minutes until the battery hit zero. That’s a pretty poor score, and wouldn’t see you through an entire work day without being plugged into the mains. 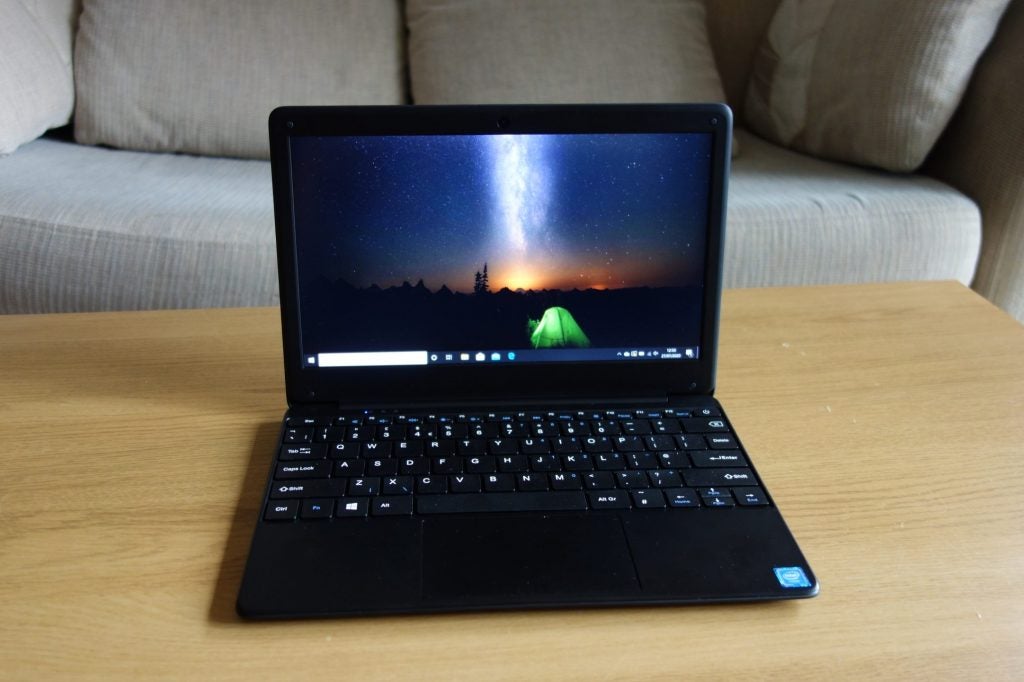 Such a poor battery life reinforces the idea that the Arka Book is best used for casual computing at home. If you’re hopping between lectures or commuting to the office, you’ll probably want something that’s a bit more power efficient.

Should you buy the Arka Book?

The Arka Book may be a tempting proposition considering its absurdly cheap price, but its performance is unfortunately so poor that it’s only realistically usable for young school children and casual users. Even loading up the likes of YouTube and typing on Google Drive can see the laptop slow down to a frustrating pace.

The 11.6-inch screen is at least nice enough for displaying Netflix, and it’s tiny size means it’s easy to store away or carry in a small bag, so there are some benefits for going with the Arka Book. If you just want a super-portable device for web browsing, and have a really strict budget you’re not willing to budge on, then the Arka Book can still do a job.

Otherwise, I recommend spending more to get the likes of the £269.99 Acer Chromebook 315. It may be double the price, but the extra performance power and more streamlined Chrome OS operating system will be well worth the upgrade. Alternatively, you could opt for a tablet instead if you’re happy to give up the keyboard, with the Amazon Fire HD 8 one of our top recommended ‘best value’ buys.