Preview: We try out the zombie shooter with Sony’s new Aim Controller

Sony has enjoyed a very strong first few months of Playstation VR, with a pretty decent and varied launch line-up of games. Since then, for me, killer apps have been surprisingly few and far between.

Thankfully, it seems as though Sony has recognized PSVR’s current software drought. Its answer? To wow gamers once again with another piece of immersive hardware. Last month, the publisher launched PSVR’s first major peripheral: the gun-shaped Aim controller. Sony claims the controller makes shooters more immersive, so I was curious to see what a piece of plastic could really add to virtual reality.

With the peripheral’s second compatible game – Arizona Sunshine – now only weeks away, I decided to get my hands (and head) on PSVR’s latest FPS.

To those who follow VR games closely, the name Arizona Sunshine will probably already ring a bell. Launched last December on both Oculus Rift and HTC Vive, this colourful co-op shooter sees players blasting holes through hordes of the undead while basking in Arizona’s glorious sun-soaked landscapes. Doing away with the photo-realism that PSVR games like Robinson: The Journey have attempted before, the first thing that struck me about Arizona Sunshine was just how good it looked on the standard PS4. 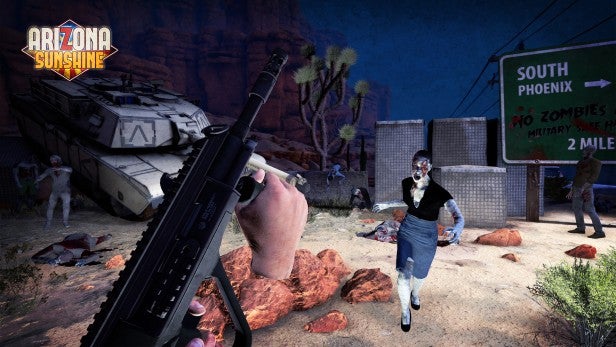 Putting on my headset, I was immediately transported to a bright and vibrant world, with clever pre-baked lighting helping to make up for the PS4’s slight lack of graphical power.

As well as looking fairly inviting, it’s a game that you can play no matter what your setup. Like most other PSVR games, players also have a few different options when it comes to how they want to do their shooting. With support for traditional DualShock 4 controls, dual Move controller aiming and, of course, the actual Aim Controller on offer, I gleefully picked up the plastic gun in front of me and prepared to kick some zombie butt.

As I clutched my brightly coloured plastic gun, I was put into the shoes of a lone human survivor trying to stay sane in zombie-infested Arizona. Thanks to a lack of human contact, it’s fair to say that our unnamed protagonist is losing his mind a little. As our hero wanders around searching for supplies, he attempts to make friends with every undead attacker he meets, affectionately naming each of the horde Fred. Yeah.

After striking up a slew of ‘wacky’ conversations with several zombies before I blow their heads off, I soon stumble upon an abandoned campsite. As I proceed to raid it for supplies, I discover a discarded radio – and more importantly, one with a human voice on the other end of it. 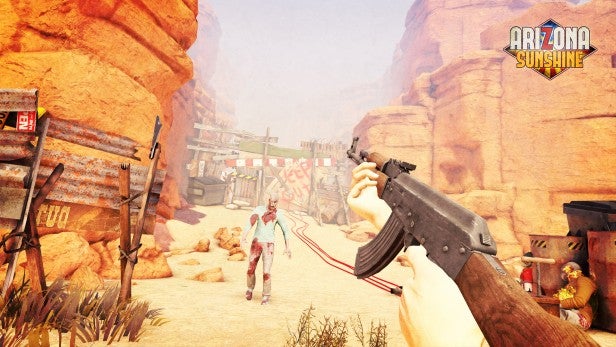 From there on, I’m told that the three-hour story mode sees players making their way across the desert as they attempt to  track down the other survivor. While my brief taste of the overly self-aware dialogue didn’t do a whole lot for me, thankfully the game’s shooting most certainly did.

For a game all about slaying zombies, Arizona Sunshine demands a surprising degree of marksmanship. Raising my Aim controller and looking down my rifle’s virtual sights, I was impressed by how realistic and precise shooting felt compared to most other VR FPS titles. Instead of just relying on a standard cursor, pulling off each headshot actually requires aiming down your barrel with pinpoint accuracy.

Admittedly, initially I struggled a bit to make clean headshots, but mercifully the early-level zombies were just slow and dozy enough not to chew my face off. Ten minutes after adjusting to ‘real’ aiming, I was blowing off heads left right and centre, getting into a satisfying groove with the sturdy-feeling controller.

Taking its cues from the ill-fated Wii Zapper, this motion-tracked gun-shaped controller doesn’t exactly look like the future of virtual reality. Yet, despite being reminded of a Wii-era gimmick, I was pleasantly surprised to find that the Aim actually lent a brilliant layer of immersion to my zombie-slaying. 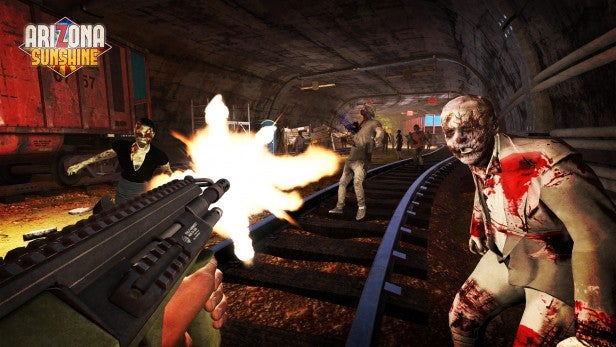 Yet, as well as just being a lot of fun to use, playing with the Aim Controller actually has implications with the weapons you get to use in the game. When slaying those lovable walking corpses on Rift, Vive or with two Move controllers, Arizona Sunshine gives the players dual weapons. With the Aim Controller, however, the whole game is balanced differently, offering players rifles, shotguns and various new two-handed weapons.

As a result, playing Arizona Sunshine with the Aim controller is a genuinely different experience.

Arizona Sunshine supports two very different types of movement styles. With the game’s story mode largely consisting of players walking through environments to find the next drove of zombies, movement is key. Doing away with the on-rails approach that defined many of the early VR shooters, here players can either opt to use the widely adopted teleportation style of movement, or go full analogue. 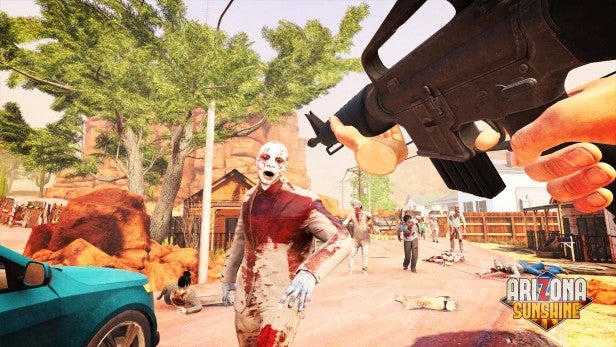 While using the analogue stick to walk around is certainly more immersive, it’s not for the faint of heart. Using your head as the right camera, the disconnect between analogue movement and physical turning can make some people incredibly sick. Thankfully, I found the traditional movement to be gentler than in most VR games, adding greatly to my exploration of the zombie-infested desert.

In a PSVR first, Arizona Sunshine adds several online modes to the traditional FPS. Supporting two-player online co-op and up to four players on its online horde mode, it feels surprisingly well-rounded for a VR game. Both fared pretty well during my demo. In fact, running around Arizona and going about the game’s story with another player felt like one of the platform’s most convincing online experiences yet. With most online PSVR games limiting you to a small arena, it was nice to be able to move around a less linear VR world with another player – even if it wasn’t exactly GTA. 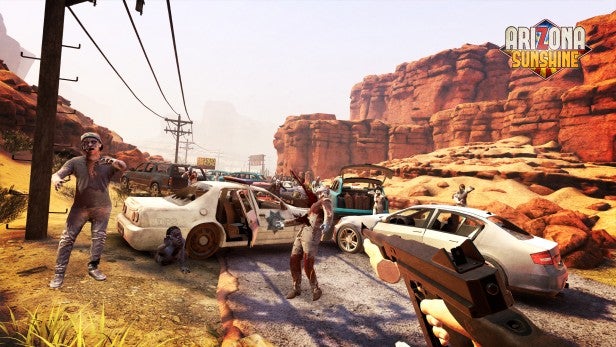 Arizona Sunshine’s horde mode was as described. Facing off against 10 waves of increasingly lethal undead felt fun if a bit basic, but unfortunately I only had the chance to test this with one other player. Upon release, up to four players will be able to gun down the hordes at the same time.

While the gun-shaped controller may look like little more than a gimmick, I was pleasantly surprised to find that the Aim actually lends a brilliant layer of immersion to PSVR shooters. In terms of gameplay, Arizona Sunshine doesn’t exactly look to be redefining the FPS, but there certainly seems to be some silly co-op fun here.

For PSVR owners itching for a spot of fun as well as some realistic shooting, Arizona Sunshine is worth keeping an eye on.