French firm Archos is well known for its all-singing, all-dancing media players, and its latest range of Personal Media Players (PMPs) includes some truly stunning products. The fabulous 605 WiFi, for instance, has a high resolution 800 x 480 resolution, touch-sensitive screen, and squeezes 802.11g wireless in as well. It’s so fully featured that you can use it as a home media hub, streamer and Digital Video Recorder (DVR) if you add the multimedia docking cradle to your setup.

So it seemed a natural progression when the company announced it was branching out, and adding a static set-top box-style network media streamer and recorder to its range. The TV+, as it’s known, does everything the 605 can do, but doesn’t have the constraint of portability and so is able to offer far more storage (250GB of it to be precise) to store all your video, music and photos on. 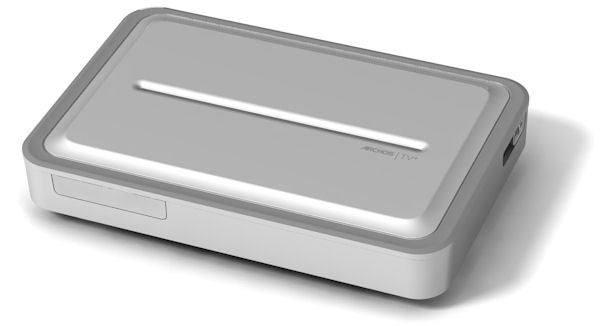 Sounds great, doesn’t it? Well it did until I hooked the TV+ up and began to play around with it. The thing is, what looks like a remarkable feat for a portable player simply doesn’t translate to a device designed to sit permanently beneath your telly. And that’s precisely what the TV+ is: a non-portable version of the 605 Wi-Fi, with the same user interface, menu system and an almost identical range of capabilities.

It’s a sleek-looking device to be sure, and at roughly a third the size of a standard Sky box should slot comfortably into even the most crowded of AV racks. At the rear is a decent selection of inputs and outputs too: as well as component input and output, you get HDMI output, S-Video and composite video, plus coaxial S/PDIF for audio and an ethernet port. An impressive line-up.

But it’s not the physical hardware I have a problem with. My first issue is that that the touch screen interface ported directly from the Gen 5 PMPs simply doesn’t translate well to a remote controlled environment. I’m prepared to put up with foibles such as a lack of dedicated play and stop controls on the remote if it means the same device will fit into a pocket. With the TV+ there’s no such payback.

The second problem is that it’s not a particularly competent wireless streamer. It’s UPnP compatible, which means that sharing videos, music and photos across a network is pain free, but the picture quality and stability of signal is poor. Using an episode of the Armstrong and Miller show downloaded via BBC iPlayer as a test video, I streamed from a Wi-Fi connected laptop via an 802.11g router and again over Wi-Fi to the TV+, with all the devices in the same small living room. The result? Regular picture break-up – something I hadn’t seen before when using the same setup to stream standard definition files from other media streamers – the Netgear EVA8000 or D-Link DSM-330, for instance.

Not only that, but when the image was stable, it was of poor quality, with over-saturated colours and a blocky, pixellated picture. The TV+ isn’t an HD device (despite the presence of HDMI and component outputs), and that tends to show up on an HD-capable TV. A bog-standard Sky tuner, external Freeview recorder box and the internal Freeview tuner in the TV all manage to produce better picture than that on the TV+. Again, other streamers I’ve tested, such as D-Link’s DSM-330, have had much better quality moving images.

And I was none too impressed with the TV+’s video format support. Out of the box you can play MPEG-4 AVI files, standard definition DivX files or WMV files up to DVD resolution – nothing more. You can playback ripped VOB files (MPEG-2), and standard definition H.264 files as well, but to do this, annoyingly, you have to pay extra (£15 a pop) for a couple of plug-ins.

Music streaming is a little more impressive, with the ability to browse during playback – a distinct advantage over most competitive media streamers. But the file format support is again unimpressive (just MP3 and WMA) until you add AAC via one of the aforementioned plug-ins.

Of course streaming is not the only feather in the TV+’s cap. It also boasts of being able to record TV. But the way this is achieved is very clunky. Instead of including a digital Freeview tuner with access to an over-the-air TV guide, it uses a combination of an online Electronic Programme Guide (EPG), called TVTV, and an infrared emitter on the box itself, which it uses to cleverly turn on your satellite box and change channel in preparation for recording.

This worked fine for me during testing, but it’s no substitute for a decent twin-tuner recorder, which can do all this, plus allow you to watch another channel simultaneously or even record two at once. To compound all this, after an initial year of free EPG, you then have to pay a subscription if you want to continue using it.

Perhaps more useful is the ability to transfer already-recorded programmes or movies from an external Digital Video Recorder (DVR) box to free up space. You can simply set it to record for however long the desired programme runs for and then leave it to record. The TV+’s ability to act as a simple Network Attached Storage (NAS) box is a nice extra here, allowing files to be transferred to and from the device without recourse to the awkward on-board user interface, but again there’s an aggravation: you have to manually switch the box into file server mode to access the files on it, and then switch it back to streamer mode to watch or record.

Archos is pushing the ability to synchronise the box with your Archos PMP (such as the 605 WiFi) using the device’s USB socket. But this is an unnecessary duplication of effort and money: why do this, when you can simply cut out the middle man and use a Gen 5 Archos player and cradle to transfer recordings directly?

You can also use the TV+ to download content from Archos’ own content portal. There’s a selection of partner websites to choose from, but there’s not yet a great deal in the way of recent movies or premium TV series to rent or stream. A search for Stardust and then Transformers returned no results on CinemaNow – Archos’ English language film partner. It’s also a pain to set up. You first have to register the device with Archos’ own content portal using your PC’s internet connection, then you have to sign up to each service individually – hardly a streamlined process.

Finally, you can use the TV+ to browse the web from the comfort of your sofa. Frustratingly, though, this is yet another feature of dubious value: for starters you have to pay an extra £20 for yet another plug-in, and even then it’s not the slickest experience in the world. The low resolution makes web pages feel cramped, and though entering addresses is made simple with the mini-QWERTY keyboard on the remote, clicking links with the mouse cursor is a slow and laborious process.

The TV+ has a lot of potential and is certainly stacked with features. But it has too many shortcomings to be worth spending £250 on. It’s not a particularly good media streamer. It’s not an elegant alternative to Sky Plus or a decent twin-tuner DVR. Its on-demand content is as-yet limited, and its user interface – borrowed from the Archos PMPs – is clunky and unintuitive to use with a remote control.

What makes this all the more galling, however, is that to get full functionality out of the TV+ you have to buy, download and manually install a handful of extra plug-ins. And that, unfortunately, is the final nail in this product’s coffin.