Kids these days… you only have to walk 100m down the street to see some nipper with an iPhone. If you have a child pleading for an iPad or iPhone, Archos’s new Arnova ChildPad may be of interest. It’s a sub-£100 Android tablet, making it a potential low-cost rival to Apple’s tab.

Design
What is the simplest way to make something seem kid-friendly? Make it colourful. The Archos Arnova ChildPad waves goodbye to the tablet-standard black body, swapping it for a much brighter combo of blue and white. 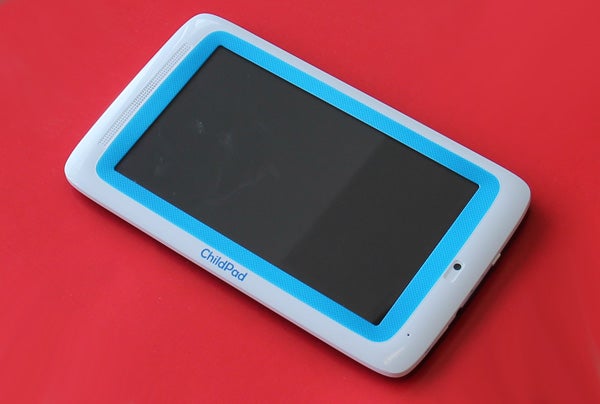 It’s an all-plastic body tablet, but the rear has a pleasant soft-touch finish – kinder on those little hands. However, aside from these small differences, the ChildPad is a dead spit for the Arnova 7b G2. It’s predictable, then, that this tablet isn’t any lighter than the 7in norm. 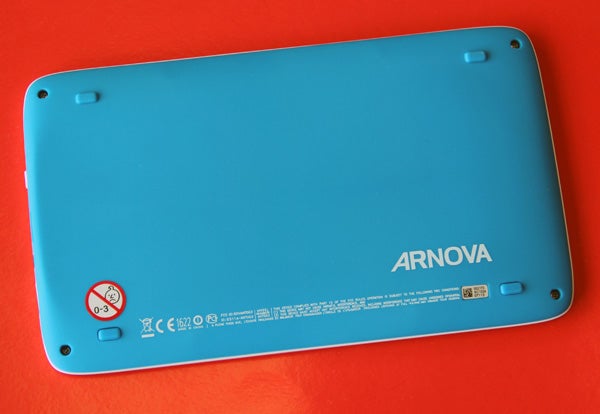 It weighs 341g, which is likely to be too heavy for very small children. A sticker on the back suggests the tablet isn’t for 0-3 year olds, and as teenagers are likely to want to migrate to something more serious, we’ve slotted this one into a mental 4-10 year olds category. The question is – what has Archos done to make the tablet kiddie-friendly in use?

There are few clues on its body. As with all of Archos’s current tablets, the connections are slotted-into one side, the right one. There’s a 3.5mm headphone jack, microUSB data and charging slot, and a microSD memory card slot just below. A dead giveaway that this is just a colourful version of an existing design, there’s a plugged-in port where a video output would be on another model. 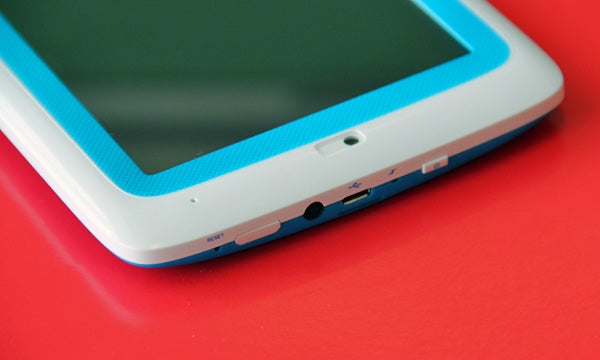 Wireless connectivity is similarly stripped-back. There’s Wi-Fi, but no Bluetooth, no GPS and no NFC.

Other on-body features include the standard pinhole microphone, mono internal speaker and a kiddie-facing VGA camera. So far, Archos isn’t really convincing us that much effort has been put into making the ChildPad kid-friendly.

Specs
That said, we can’t complain too much about the specs Archos has packed-in, given the £99 price. The Archos Arnova ChildPad has a single-core 1GHz processor, 1GB of RAM, and a capacitive multi-touch touchscreen. It’s obviously not a patch on the Google Nexus 7, available for £60 more, but then this tablet is aimed at those trying to spend as little as possible, as well as those buying for kids. But do the savings pay off? 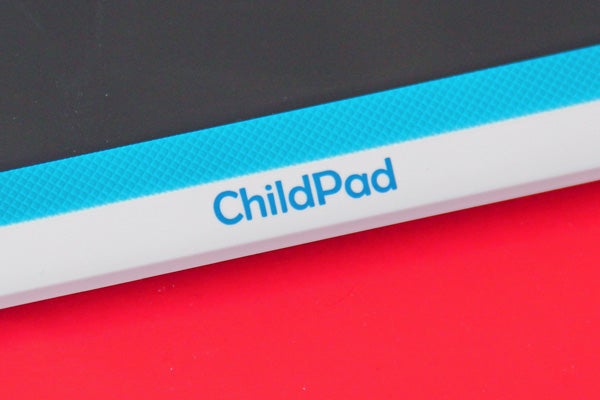 Interface, Apps and Games
This is the cheapest tablet we’ve seen to use Android Ice Cream Sandwich, version 4.0. It’s not the very latest version of the Google OS, but it’s not an old dog either.

If this was a tablet designed for adults rather than kids, we’d be a little impressed. The problem is that the learning curve of the OS is actually tricker than the older versions, and no big UI changes have been made here to help out. 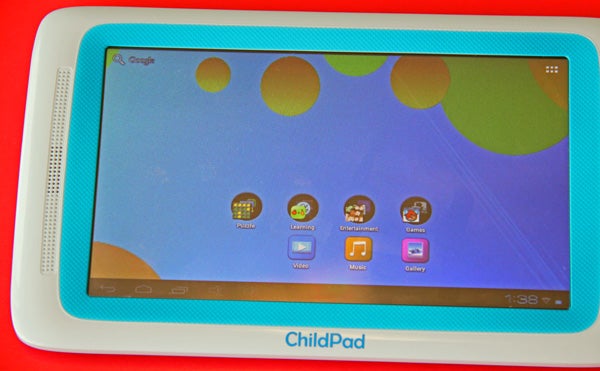 Ice Cream Sandwich brings hints of a desktop computer OSs, like Windows or Mac OS, to what was traditionally a smartphone system. That means more intricate menus, designed for larger screens. When first using the system last year, it took us long enough to realise you have to tap the top right of the home screen to access the main apps menu. We’re honestly not sure how a 5-year-old would fare. 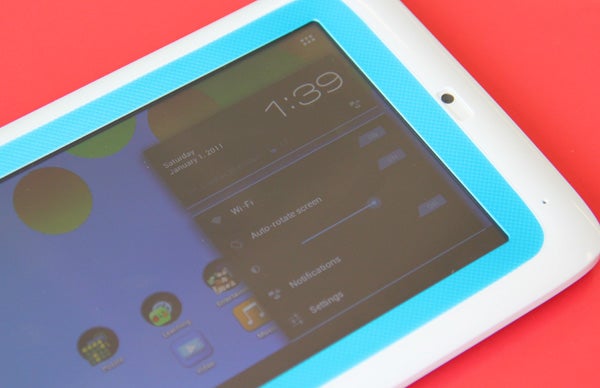 The beauty of an iPad is that its largely one-layer OS is accessible to just about everyone, from tech novices to grans, to babies, to curious cats. Android is a whole different game of “prod the screen”. 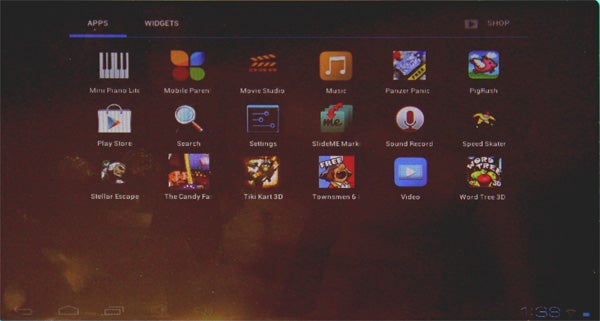 To try and get you started, Archos has installed a bunch of simple games and “edutainment” apps. There are more than 20 in total, ranging from virtual pianos to counting apps and the Mario Kart-like game Tiki Kart 3D. However, Archos shouldn’t get too much credit for any of these, as they’re all readily available to download for free.

But not from the Google Play app store, not here at least. The Archos Arnova ChildPad is not fully Google-certified, meaning it misses out on official Google apps like Google Maps and Mail, and Google Play store access. In its place, Archos has installed AppsLib. 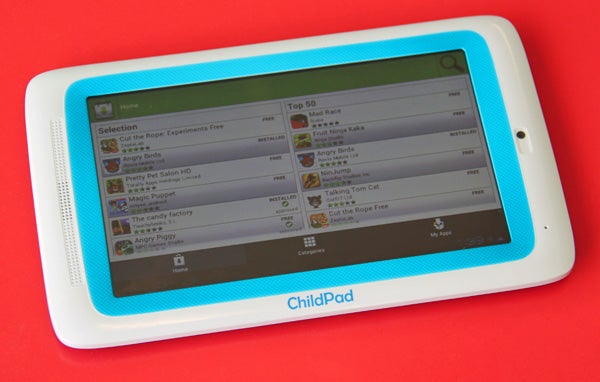 This is a third-party effort that supports a wide range of budget tablets of the last few years. It’s not as good as Google Play, with a poorer app selection and user interface. But it will let you grab favourites like Angry Birds, and has more than 30,000 apps in total.

Worried about what your kid might find when trawling the web in general? Mobile Parental Filter comes pre-installed too, blocking adult content from the Android browser. The Arnova ChildPad comes with six months’ use of the app, which is more than the 30-day trial offered by the standard Google Play download.

It’s only worth a fiver though – a year’s subscription costs £9.99. And it’ll be pretty useless in stopping any vaguely tech-savvy older kids as it won’t stop naughty content from loading on third-party internet browsers, and can be uninstalled easily enough.

Storage
The Arnova ChildPad’s main storage is comprised of 4GB of solid state memory. After all the initial apps and software bits and bobs are installed, you have just over 2GB to use. This is enough for several handfuls of casual games, or a couple of films. For a more voluminous media collection, you’ll have to plug in a microSD card.

Connect the tablet up to a computer using a microUSB cable and the tab will show up as a “media device”. You can drag files over to it without any additional software, making transferring files much simpler than with an iPad. 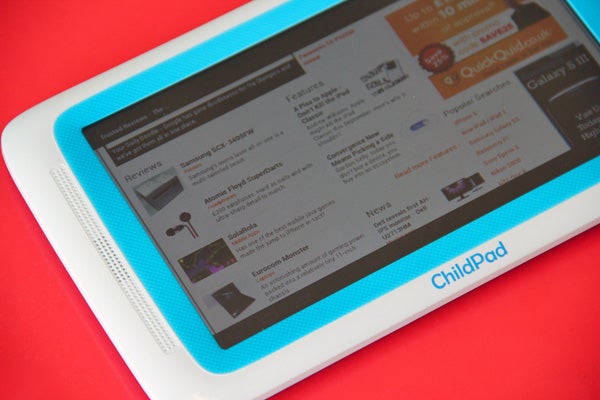 Performance
Assuming that the child blessed with the ChildPad manages to get to grips with the Android interface, the tablet puts in a reasonable performance. The 1GB of RAM and 1GHz processor can handle casual games like Angry Birds and lesser 3D titles without serious slow-down. And while there is some lag in the basic navigation of Android, it’s generally a good deal better than many of the older ultra-low-cost tablets out there. For example, the Archos Arnova 10 couldn’t even handle Angry Birds at a playable speed.

A few other ropey parts stop the ChildPad from being a joy to use, though. To start off, it’s a little buggy. Apps didn’t freeze up more than the budget Android norm, but the touchscreen would occasionally behave erratically, registering ghostly taps that never occurred. And this would lead to interface elements like the volume control sticking on-screen much longer than expected – an annoyance. This seemed to get much worse while the tablet was charging, making it virtually unusable at times. Next up…

Speaker quality
The tablet uses a single internal speaker that sits to the left of the screen, and it is not good. Not good at all. Its sound is reed-thin and it’s not capable of any respectable volume. In a noisy kitchen or a car, the ChildPad will struggle to be heard. 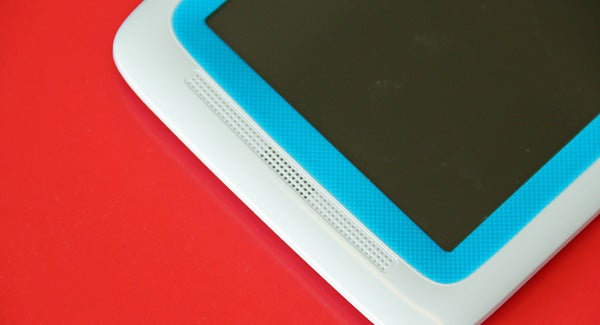 Screen
The screen is also fairly poor. It is 7in across and uses a pretty lowly 800 x 480 pixel resolution – the £60-more Nexus 7 brings 1,280 x 800 pixels to the table. These aren’t the most serious issues with the screen, though.

Its display uses a fairly low-quality TN panel. Unlike the screens of higher-grade tablets, the image loses much of its presence, its contrast, when the ChildPad is tilted backwards. One of the most obvious uses of a cheap tablet like this is to keep the kids occupied watching a film while in the car, but the poor screen quality takes the shine off this a bit. Colours look a little unnatural to boot, and the low pixel density of the screen is pretty clear in use.

Video skills
However, the Arnova ChildPad does benefit hugely from Archos’s heritage. Back before the days of smartphone ubiquity and tablets, Archos was one of the main producers of PMPs – portable media players. And as such, it’s a pro at packing excellent video support into its Android devices. 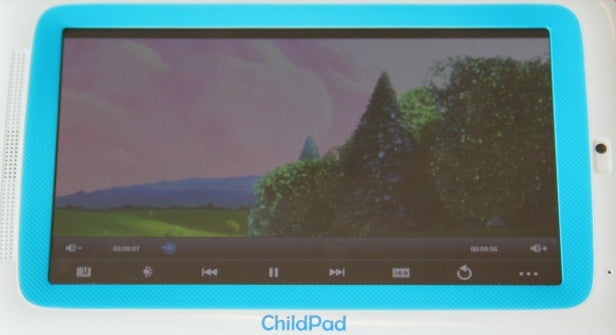 The ChildPad can play the majority of popular video formats, and even coped with 720p MKVs at full speed. That said, playing even a 720p video on an 800 x 480 pixel screen is a little pointless. The internal battery lasts for around five hours of video playback.

Will littluns be put off by the poor viewing angles of the tablet? Perhaps not, when the Google Nexus 7 is available for a “mere” £60 more, offering a much, much better screen, the upgrade is tempting.

Web browsing and social networking
The Archos Arnova ChildPad comes with a web browser pre-installed, but doesn’t have any social networking tools on-board – no Facebook and no Twitter. As must-haves for any slightly older children, it’s disappointing to see that the official apps are not available in the AppsLib app store.

As with any Android device, though, there’s usually a way around such problems. We tried manually installing the Google Play app store, but it crashed upon start-up each time. Another third-party store came to the rescue, though. SlideMe offers both Facebook and Twitter apps. The question is whether the intended audience should really be expected to – or be able to – jump through such hoops. We don’t think they should

Value
It has been said by many that the Google Nexus 7 changed the game for budget Android tablets. The problem is that for all its child-friendly claims, the Arnova ChildPad is playing the same game as virtually all the old budget tablets. There just aren’t enough kiddie-friendly optimisations to make it particularly palatable for younglings – certainly less so than an iPad. 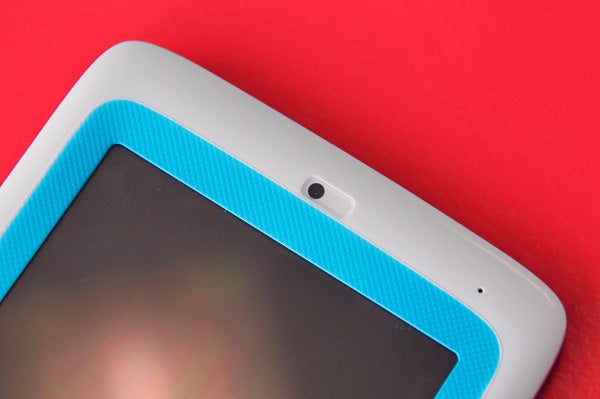 It’s also subject to many of the same restraints that shackle other budget Android tabs. There are no official Google apps, no Play Store access, flawed overall performance and the screen is poor. It costs less than a hundred pounds and is much more fun to use than a resistive touchscreen tablet (beware, there’s a resistive version of the ChildPad about too), but the value equation here no longer makes enough sense.

Verdict
The Archos Arnova ChildPad claims to be an Android tablet designed for children. However, its kid-friendly optimisations don’t go far enough to make this palatable for a young crowd. Android is not as accessible as the iPad OS, and the ChildPad does nothing to change that. And slightly older children with the nous to tackle Android may be frustrated by the poor screen, and lack of Google’s app staples and Google Play app store access.