Several manufacturers are playing a game of tablet limbo at the moment – trying to see how low they can go on price before they well and truly fall down on their posteriors. The Archos Arnova 10 is a sign of the manufacturer taking the bar dangerously low. It’s an Android tablet with a 10in screen that retails for just £150. Do the limbo!

Following in the footsteps of the budget but rather good Archos 101, the Arnova 10 takes the penny pinching a step further, shaving off another £100 off the price of the 101. The capacitive touchscreen has been ripped away, replaced with a resistive version. It has had its 1GHz processor torn from its belly and replaced with a much less powerful model (Archos hasn’t released the specs) and the build quality has been significantly – but not disastrously – downgraded. 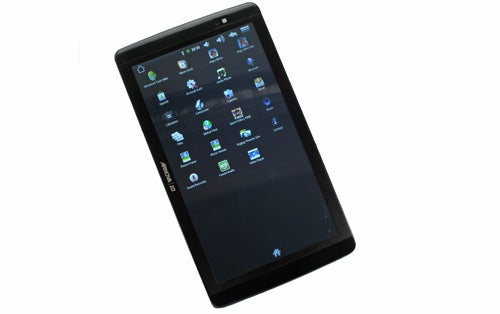 Where the Archos 101 was made of plastic and metal the Archos Arnova 10 is plastic all the way. Oddly enough though, it weighs almost a hundred grams more than the 101 at 570g. Start to think of the Arnova 10 as the slower, stupider, uglier version of the 101 and you’re on the right lines. We’re not trying to be mean to this poor old budget tab – it’s simply the truth.

The Arnova’s body is constructed of two main plastic plates – one for the front and another for the back. The front features a mock brushed metal central section surrounding the screen while the back is smooth apart from four small rubberised feet and the speaker grille. It lacks the panache of the 101, which only had a small share of the stuff to begin with, but build quality is more than acceptable, with only some minor flexing when put under pressure. It’s nothing like the creak-fest we saw in the Archos 70B.

All the Arnova 10’s ports and physical buttons are on its left edge. There’s a 3.5mm headphone jack, USB and microUSB slots, a microSD slot and the power jack. There is a gap for an HDMI slot in its body work, as this tab uses the same basic design as the Archos 101, but it has been filled-in with a piece of plastic. On this edge also sit the power and volume buttons.

With a user-facing camera slapped on its front, it initially looks like the Archos Arnova 10 isn’t missing out on a great deal of core features despite its cut-throat price. The kickstand of the Archos 70 and Archos 101 is gone, but it’s only in operation that the most serious shortcomings of this tablet start popping-up, just as the sound of scurrying rats only kick-starts once you’ve already closed the cellar door and locked yourself into darkness…

One of the cuts made to the Arnova 10 is the use of Android 2.1 rather than Android 2.2 or an even newer version. Android 2.1 doesn’t offer full Flash support and is a lot slower than its younger more dashing brother. Now that it’s more than a year old, Android 2.1 is positively ancient by Android standards.

Archos has dropped a custom UI onto the Arnova 10, in order to fill the void created by the lack of soft keys. It features a bar on the top of the screen, housing virtual home, back, menu and volume control buttons. Unlike the Archos 70 and 101 custom UI, it’s not optimised for thumb operation, instead demanding that you take a hand away from holding the tablet to prod away at these buttons. It’s simple enough, but by comparison doesn’t feel as considerately thought-out. 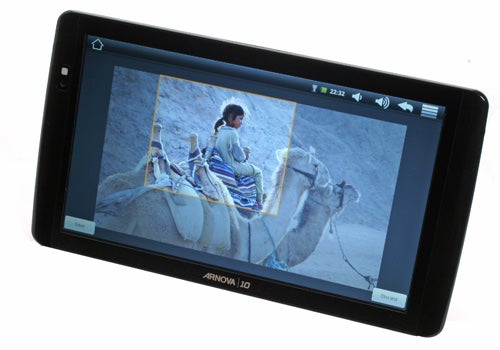 Too big and heavy to use or hold single-handed for long periods of time, a UI that encourages you to take your hands away from the standard grip position – one at each end of the Arnova 10 – isn’t doing it any favours. Like the Archos 101, this tablet is extra-unwieldy thanks to its widescreen aspect ratio.

The touchscreen doesn’t help matters either. It’s a resistive model, sensing direct pressure rather than conduction (as a capacitive touchscreen does), and is an unusually poor example of the technology. Some newer resistive touchscreens have almost fooled us into believing they’re of the more expensive capacitive kind, but not so here. It’s very unresponsive, requiring a concerted prod for every single tap, drag and scroll. Having to put so much effort in is a strain on your finger, but an even greater strain on your patience. 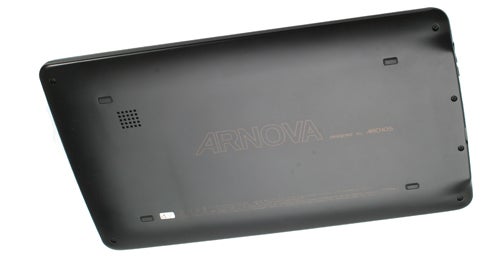 Day-to-day navigation is reasonably quick in pure processing terms, but it’s slowed down to a crawl by the terrible touchscreen. Switching to a stylus, and none is included, improves matters slightly but if you’ve ever used a touchscreen for any significant length of time before, that haunting sense of dreadful compromise will never leave.

The customisation of Android is some mitigation here. You have three home screens to fill as you see fit, and if you plaster them with widgets relaying much of the info you’ll need daily, such as tweets and emails, you will at least cut down on some of those taps. The number of widgets you have access to is naturally limited by the app selection though, and it’s not great here…

Like many early Android tablets, the Arnova 10 doesn’t feature the Android Market app store. Instead it uses a third-party alternative, AppsLib. This is slower and less well-stocked than the massive Android Market, but is a reasonable compromise. It covers most of the bases with favourites like TuneInRadio, Angry Birds and maps applications but isn’t – and never well be – a patch on the real deal.

Some of Archos’s other tablets can be tweaked to get the full Android Market installed, using the Arctools program, but this method didn’t work with the Arnova 10. For now at least, you’re stuck with AppsLib, and without Google’s own fine selection of Android apps. 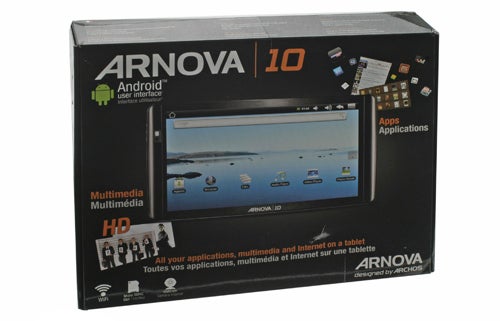 Pre-installed apps are very sparse, comprised of the bare-bones basics such as an email app, browser and video player. There are no impressive dedicated apps here – the Arnova’s only special move is being able to play plenty of video types including MKV, Xvid and DivX. Spend an hour searching through the AppsLib app store and it’s easy to get the Arnova 10 stocked up, but many apps – games especially – struggle on the tablet. Angry Birds for example is extremely slow, reduced to a frame or two per second instead of the 60 you’d get with a more capable tablet or smartphone.

Smartphones running a 600MHz processor have no such trouble keeping simple games like Angry Birds running at playable speeds, so we can only assume there are some serious software issues at the Arnova 10’s core or that its Rockchip 2818 processor has been seriously underclocked. This would likely be to maintain a decent battery life, but even in its current state battery performance is not all that impressive, languishing around the 4-hour mark when playing video.

It’s not good at running apps, its resistive touchscreen makes it a ropey web-surfing device, but is it any good at video? If the Archos Arnova 10 has a trump card, it should be video.

Playback quality is reasonable at the price and as mentioned codec support is very good. Indeed even though some HD content stuttered significantly in our tests, it makes us wonder why this tablet has such a problem with apps and games. Plus points aside, the low quality of the display stops watching video on it from being particularly pleasurable. Yes, even with video it ultimately fails. 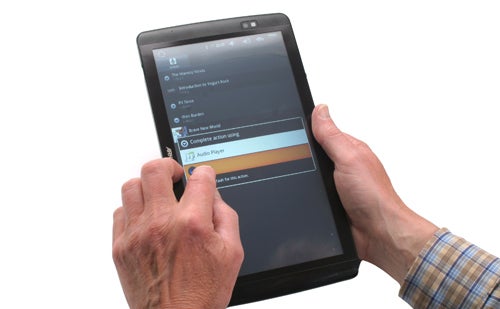 Viewing angles are very poor, contrast is below par and the half-decent brightness is tripped-up in real-life use by the contrast shift that occurs when the tablet is moved even slightly from the perfect viewing angle. 10in is a comfortably large size to be watching full-length TV episodes and even movies on, but we’d trade down to a 7in size if it meant getting a better-quality display.

In any case, that’s exactly what we’d suggest you do here, and not just for video. The Archos 70 is available for slightly more than, or even the same price as, the Arnova 10 but offers a better display, far better touchscreen, superior build and the potential to get the Android Market up and running. If you have to get hold of a 10in tablet, the Archos 101 is also a much better bet – patching up almost all of the key issues with the Arnova 10, if not quite to the extent to make it a must-have gadget.

Verdict
The Archos Arnova 10 has had so many of its corners cut to save cash that there’s almost nothing of worth left. A poor touchscreen, bad display and molasses-slow speed within apps team up to ruin the day of anyone trying to use the Arnova 10.