E Ink ebook readers like the Amazon Kindle dominate the market in the UK, but they’re not the only type out there. The Archos 70d offers a hardware design and software fully geared towards reading, but uses an LCD screen rather than a paper-like E Ink display. Best of all, it’s dirt cheap at £59.99. But it proves once again that if you want a ereader that can do other things too, you can’t scrimp quite this much.

Design
French company Archos was once the king of the personal media player (PMP). But now that smartphones have become so much better and tablets have well and truly arrived, it has had to diversify. The Archos 70d is an LCD screen ereader geared towards the budget buyer. Costing £59.99, it’s cheaper than the Kobo eReader Touch and the Amazon Kindle. 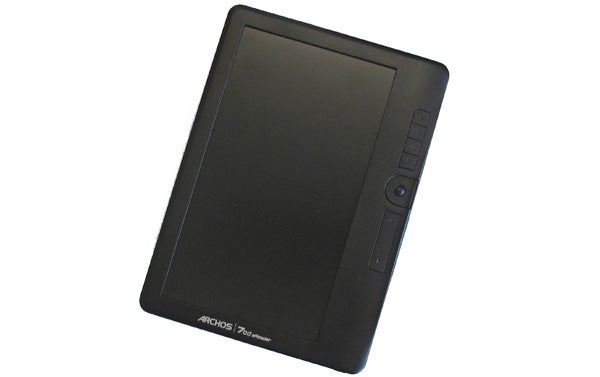 It has the ereader form down too – this isn’t just a tablet that calls itself an ereader. Along the right edge is a row of physical nav buttons, including a D-pad that can be used to turn pages, and a duo of dedicated page turning buttons below. Without a touchscreen to rely on, these buttons are all-important. There’s a neat ergonomic ridge along this edge of the ereader, which snugly cups your thumb making the 70d fairly comfy to hold. It’s not perfect, though.

The page turn buttons are a little spongy and aren’t optimally-arranged, the less-used “back” button given top billing near to where your thumb rests. The D-pad is also a little cramped and tricky to operate at times. What’s more the Archos 70d is significantly heavier than most current ereaders. At 279g, it’s comfortable enough to hold one-handed, but switch between it and the feather-light 166g Kindle and there’s no mistaking the difference.

Its body is made up of two slabs of textured black plastic, unceremoniously jammed together, leaving a guileless seam running along its edges. It feels solid enough, but lacks the carefully-designed feel and modern look of the Kindle and Kobo alternatives. 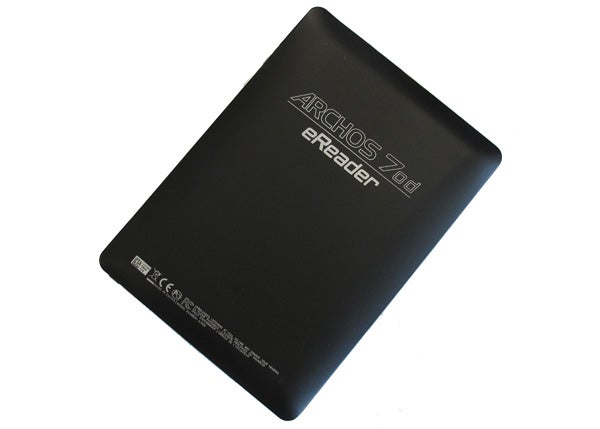 Connectivity
Connectivity-wise, there’s nothing to complain about, though. Along the right edge there’s an exposed microSD memory card slot and a microUSB socket. Plug the 70d into a computer and the 4GB of internal memory shows up as a disk drive, making it easy to drag and drop ebooks, videos or music tracks.

This is a device that’s not quite as intensely book-centric as most ereaders, with music and video players built into its interface. There is no internal speaker, but there is a 3.5mm headphone jack up top.

Like almost all ereaders, the Archos 70d uses a non-removable rechargeable battery. With an E Ink reader, not being able to carry around a spare isn’t much of a hardship as battery life can be measured in weeks rather than hours (stamina is more accurately described as X thousand page turns). However, the 70d conks out after 6-10 hours, depending on screen brightness and usage, making it more of an issue.

Screen
The Archos 70d uses an LCD screen. This doesn’t provide
the optimum reading experience – a backlight can cause eyestrain – but
Archos has made a few tweaks to improve things.

It uses a matt
finish, reducing the effect of sunlight by minimising screen reflection.
However, it’s still not a patch on an E Ink display to use outside on a
sunny day. The screen backlight ends up fighting with ambient light
sources, making the screen appear dim – paper-like displays use natural
light to their advantage, making ebooks look all the more vibrant.

The
screen finish also has the unpleasant effect of making images appear
mottled. When reading, this manifests as a hazy sheen across the white
part of a page. This and the low 480 x 800 pixel resolution makes ebooks
look quite ugly compared with E Ink readers, tablets with higher
quality displays such as the iPads. 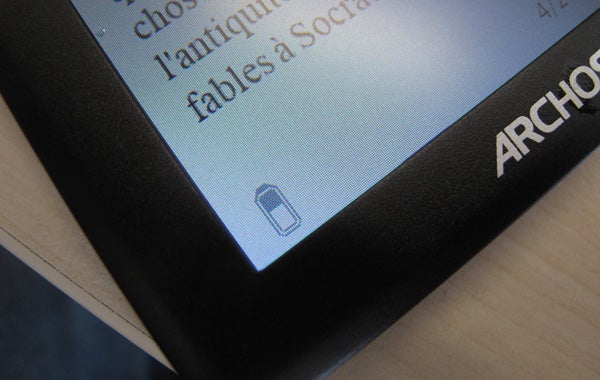 Whites are a little rainbow-like on the 70d

Fairly
low-quality screens like this are also more likely to cause eyestrain
and headaches following prolonged sessions, although we’ll admit we
didn’t suffer from such effects. The Archos 70d’s hardware buttons make
reading comfortable on your digits, but this ereader is not so easy on
the eyes.

Video playback
The LCD screen does come in
handy when you want a break from reading, though. Unlike E Ink readers
you can properly watch video. Format support is great, with popular
formats like MKV, DivX and Xvid able to play without any fiddling. The
underpowered processor struggled with HD-quality video, but breezed
through standard definition vids just fine. 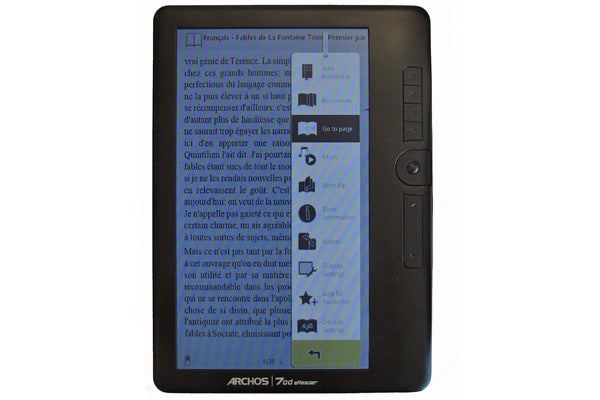 Video
playback is – of course – somewhat affected by the mediocre screen
quality. There’s significant loss of brightness as soon as you start
tilting the screen back and the mottling effect is clearly visible in
areas of block colour. However, it fares better than many a budget
tablet, which often suffer from much worse contrast shift – which robs
images of any shadow detail. Odd as it may sound for an ereader, the
Archos 70d’s video abilities are the best reason to buy it.

Interface
The
Archos 70d runs a custom user interface. Unlike some LCD-screen
readers, it’s not based on Android. This means you won’t be able to play
Angry Birds on it, but ensures it runs reasonably well – for a
bargain basement device. Aside from a few freezes that demanded a reset,
there is only a slight lag between menus and a loading pause when
opening a book or PDF.

A homescreen shows you the book you’re
currently reading and a half-dozen titles from your library, and other
options drop down as an animated overlay upon pressing the Menu button. 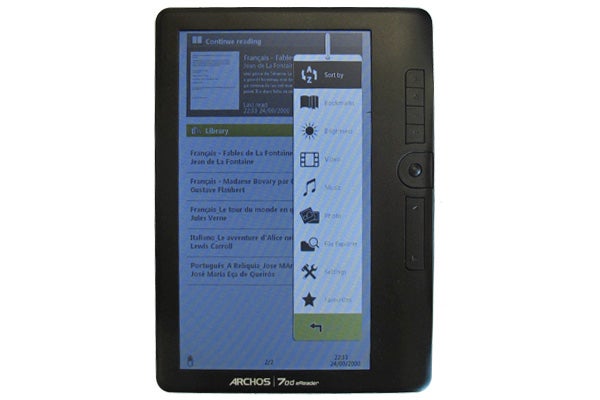 The
software is not feature-rich in ereader terms, but offers auto rotate,
bookmarks and control over the brightness of the backlight. You can
change the colour of fonts and the background too, but this only serves
to highlight how odd it is that the Archos 70d doesn’t give you control
over font size or style – you’re stuck with the default. There’s also no
Wi-Fi, ruling-out buying books directly from the device.

In
return for these basic omissions, the Archos 70d offers good format
support, including DRM EPUB and PDF files. However, not having full
control over font size and style will be a deal-breaker for many.

The
Archos 70d is cheap and can – in some senses at least – do more than
the more popular dedicated ereaders out there. However, it doesn’t do
any one thing well. Its screen sours the reading experience and limits
its desirability as a portable video buddy. When top-tier E Ink ereaders
are out there for just £10 or so more, we can’t recommend giving the
Archos a go.

Verdict
Cheaper than a Kindle and with far better movie-playing chops than any E-Ink screen ereader, the Archos 70d may sound like a good buy for under £60. However, the low-quality screen stops it from being a viable alternative to the better-known readers when it comes to its core task: reading. We’d suggest saving up a few pennies and getting a proper E-Ink ebook reader.