For several years now I’ve had a dream – a dream I’d like to call ‘Shed Cinema’. You know how it is: you spend years building your dream home cinema system, buying a big-screen TV or projector with surround sound speakers and DVD/Blu-ray player to match, and do you ever get to watch a movie on it? Nope. Instead, it gets wasted on kid’s films, home improvement programmes and sports you haven’t the vaguest interest in, while you slowly develop a backlog of must-watch films that you never get around to actually watching.


One day it dawns on you that what you need isn’t a living room system, but something portable that you can sneak out to the shed with and enjoy your feature presentation in blissful peace and quiet. Such a device would need a big, high-quality screen so that you can enjoy your films as they were meant to be enjoyed. It would need high-quality sound through headphones and – if possible – speakers, a capacious hard drive and Wi-Fi connectivity so that you could stream content direct from your PC. It also needs a battery that can last out a viewing of Return of the King: Extended Edition if need be. Some warm clothes and some smart excuses, and you’d be away.


Archos has just made this dream a reality. 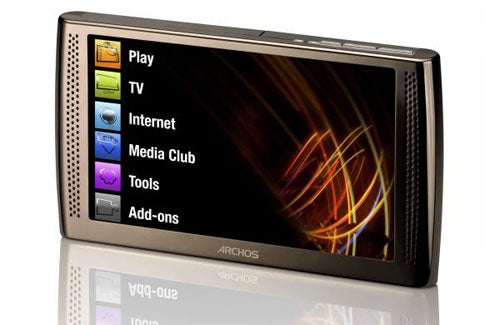 Of course, Archos doesn’t market it as ‘the complete shed cinema solution’ (though maybe it should). Instead, the Archos 7 is described as an Internet Media Tablet. Those of you without goldfish memories might also realise that it’s the larger cousin of the Archos 5, which we reviewed back in October. In essence, the Archos 7 is nothing more than the Archos 5 with a bigger screen, but that one change makes such a difference that such a description doesn’t really do it justice.


You see, the move from a 4.8in 800 x 480 screen to a 7in screen with the same resolution has two major consequences. The negative one is that it’s a struggle to describe the Archos 7 as truly portable. With the same elegant, shiny, gunmetal casing as the 5 it’s still a hugely desirable PMP, but it’s as large as a paperback book and, at 640g, over twice as heavy as its smaller sibling. It’s light enough and solid enough for you to take on a trip or use on the plane or train, but it’s not the sort of thing you’d want to carry around all day, every day. In fact, you’d have to be mad to use it as your main MP3 or mobile video player. I’m not so sure, however, that that’s really an issue; there are plenty of small, cheap PMPs that fill that need. The Archos 7 is all about two things, browsing the Web and watching movies, and in both cases that screen has serious benefits.

For movie watching those are obvious. This is about as big a screen as you can handle in two hands and it fits the supra-DVD 800 x 480 resolution perfectly. The image is bright, crisp and generally magnificent, the display handling rapid movement and vivid colours without any sign of ghosting or smearing. With a 600MHz ARM Cortex processor, a 32-bit DSP and 128MB of SDRAM, slowdown and poor frame rates are no problem, provided files are properly encoded. Normally, I’d watch a DVD rip of a blockbuster film like Iron Man on a mobile device with the feeling that I wasn’t even getting 50 per cent of the experience, let alone something approaching mobile home cinema. With the Archos 7, I can forget about the limitations of the screen and just enjoy the film. Decently encoded movies are a must, and if I was feeling really picky I might say that the black level response could be better – darker scenes lose detail and some impact – but this is still hugely impressive stuff. With a decent set of headphones the sound is equally immersive, with a nice, wide soundstage and power and clarity to spare. Admittedly the output from the built-in speakers is too tinny to be of much use, especially when you pump up the volume, but at least this gives you options if you want to share a film or TV programme with others. Nor do you have to worry about the batteries running out before the movie ends; Archos quotes a ten hour battery life, and we achieved a little under nine in tests. 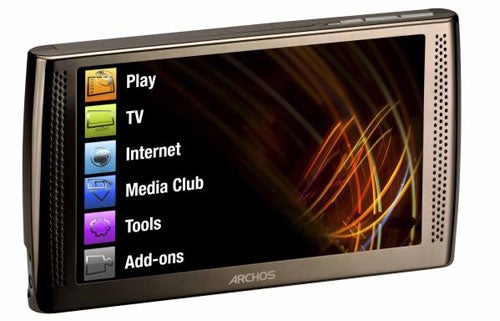 There’s more good news if you just want to relax and listen to music – the Archos 7 will handle your audio files in style. As with the Archos 5, the bundled earbuds aren’t actually that bad, but if you want to get the best from playback then you’re still advised to plug in some replacement ‘phones. Do so, and you’ll get a clean, warm tone with plenty of detail that can handle complex classical music, stripped-back fifties Jazz or thumping, bass-heavy pop with equal aplomb. From the sweet, high violin of Ralph Vaughan William’s ‘The Lark Ascending’ to the tense, rock-hard beats of Justin Timberlake’s ‘What Goes Around, Comes Around’ and through the ragged-edged guitar and vocals of Kings of Leon’s ‘Revelry’ the Archos 7 sounds superb. Only a handful of players I reviewed last year could better it. The quality of the output is backed up by strong format support. On an HDD-based player with a 160GB hard disk there’s room for the odd uncompressed FLAC file, while OGG Vorbis support is always popular with those who have adopted the excellent MP3 alternative. iTunes users should beware, however, that AAC playback demands an optional £12 plug-in.

This sort of miserly behaviour remains a bugbear for the Archos 7. As with the Archos 5, you can play SD MPEG-4 and WMV files, but if you want to play HD H.264, MPEG-4 and WMV files then you’ll have to pay for a plug-in which – at the time of writing – isn’t actually available to download. This isn’t a disaster for anyone with some technical know-how a decent video format conversion package (a description that covers anyone who can rip a DVD to their PC anyway) but if you’ve already encoded your files for HD playback from a media centre or HDD-based playback device, you don’t really want to have to re-encode them for playback on a portable player. It’s not as if it’s a particularly speedy process, after all. 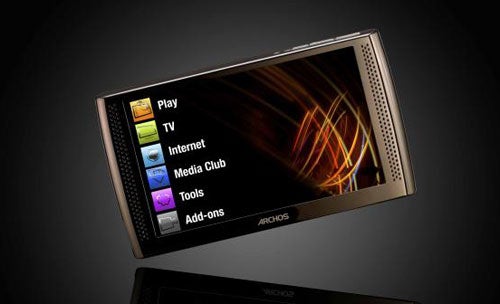 Other issues with the Archos 5 recur with the Archos 7. The good news is that the firmware seems much more stable this time, with only one crash or stall while I was using the player, but the touchscreen interface still seems less than ideal. The actual GUI isn’t bad at all; it’s easy to navigate to files or functions, browse media libraries and move forwards and backwards through the interface – all things that some of Archos’ Far Eastern rivals struggle to manage. Unfortunately, the touchscreen itself still isn’t that responsive or predictable in its activity. Sometimes it needs a good, hard prod, while at other times an unintentional finger movement sends you somewhere you don’t want to go. Basically, there are no guarantees.


Nowhere is this felt more than in what should be the Archos 7’s piece-de-resistance, Web browsing. The browser is based on Opera and is flash compliant, and that large, relatively high-resolution screen is ideal for a little light surfing. However, I just found it too difficult to accurately click on links or use the onscreen keyboard. For every time the Archos 7 did what I wanted it to, there was a time where it zoomed the screen in or out or navigated to another page instead. Use improves with practice, but it really shouldn’t be this hit and miss.

The other functions beyond movie and music playback remain a mixed bunch. Email support is excellent and easy to set up, and that lovely screen makes the Archos 7 a great photo viewer. On the downside, the games I sampled were laughably poor, the selection of movies and music available on Archos’ download service, Media Club, leaves much to be desired, and the ‘Widget’ applets aren’t too exciting either. Web TV is a nice idea, but in practice I couldn’t find much in the Archos listings worth watching beyond a few streamed BBC News programmes. To balance that, I should point out that the Archos 7 makes a good wireless media streamer, though with Wi-Fi limited to 801.11g, you need a decent signal to make the effort worthwhile.


It’s also worth mentioning that the Archos 7 provides a strong foundation if you want to explore Archos’ range of add-on modules, all of which plug into the two expansion ports on the base. The most desirable is the DVR station which allows you to connect it up to an existing set-top-box to record video and your TV (through HDMI, Component or S-Video) for output. Here again, however, the need for optional software plug-ins to playback HD video or use the built-in program, is an irritation. The fact that Archos also sells an add-on radio module only rubs in the fact that the 7 doesn’t include FM reception as standard, while also making you wonder why the module isn’t DAB. 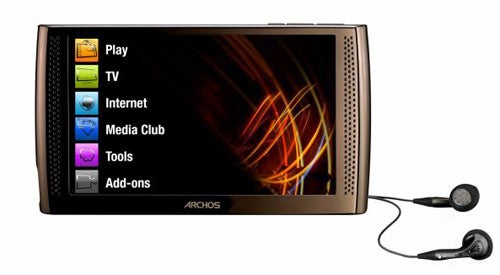 All of this comment seems a little negative, and I wouldn’t want you to come away thinking that my feelings about the Archos 7 reflect this. The Archos 7 might not be a great Web tablet, and I still find something penny-pinching about Archos’ approach, but this is still far and away the best portable video player I’ve come across, and one I’d happily purchase just for the pleasure of being able to take one box wherever I wanted to enjoy my flicks. Whether the bed, the bathroom or the shed, the Archos 7 turns your hidey-hole into your own personal cinema, and I can’t recommend it highly enough just for that. If the touchscreen interface and some minor irritations didn’t hold it back from greatness in other areas, I’d be rushing out to buy one myself. As it is, I’m just about holding back…. for now.


The best portable movie player around, albeit one that’s too big to be carried anywhere and everywhere on a regular basis. Unfortunately, the touchscreen interface and additional features don’t quite measure up.