Just when you think you’re getting too old and sensible for gadget lust, something like the Archos 5 appears. There it is, with its whacking 4.8in screen and its curvy, gun-metal body, and suddenly you don’t feel so old or sensible anymore. Archos likes to call it an Internet Media Tablet, but I’m not sure that does it justice. It’s tech-temptation incarnate – you only have to see it, and you want it.


Still, I guess Archos’ description wins on accuracy, the Archos 5 being a WiFi touchscreen tablet that connects to the Internet and plays nearly all your media (with a few caveats we’ll come to later). It plays music and video, browses the Web, handles email, displays photos, plays simple Flash games and can stream media from a UPnP enabled media server. It also supports Internet radio and – if you cough up for the relevant accessory – Freeview digital TV. Other optional add-ons provide GPS, PVR and 3G modem features. It looks like Archos has world domination in its sights.


With a touchscreen GUI Archos has been able to keep the physical design elegant and simple, with two (annoyingly) proprietary connectors at the bottom, power and volume controls on the top, a headphone socket on the left-hand side and a rather tinny little built-in speaker on the right. The unit feels extremely solid but be warned: both case and screen are fingerprint magnets, even if the coatings minimise the impact of such marks on the latter. 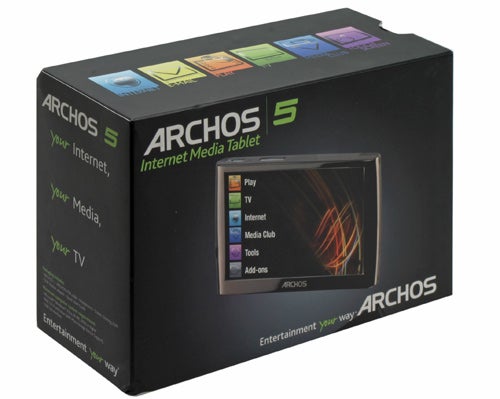 The GUI is based on a Linux platform, but Archos has tailored the front end to focus solely on the device’s Internet and Media capabilities. The Home screen breaks the functions down into Play, TV, Internet, Tools and Add-Ons, plus a shortcut to Archos’s Media Club where you can, if you’re minded to, purchase or rent and download a small selection of films and TV programmes directly to your Archos 5. Why you would want to spend £13 on Cloverfield when you can buy it on DVD for half that is beyond me, but I assume there are some suckers out there. Most of us will spend more of our time in the Play and Internet categories. 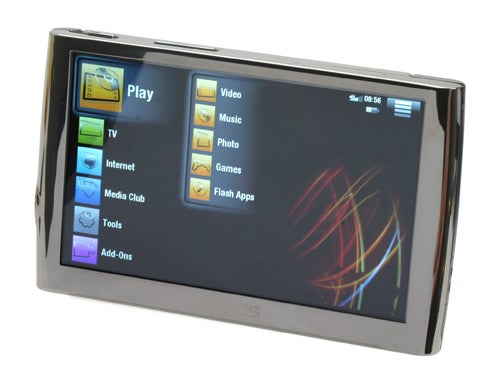 Music and Video files held on the Archos 5 can be browsed by folder or by tag, and you’ll also find shortcuts to Media Servers and Web Radio/TV services in the same space. The lists are primarily text based, with small image thumbnails, but as a whole the interface is clutter-free and easy to use.


The same goes for the Internet services. The email client is simple but functional, and connected to my Gmail account with the bare minimum of fuss. I’d rather it hadn’t tried to download all my several thousand messages by default, but really that’s all I can complain about.

The Archos 5’s Web browser is based on Opera, and features the sort of easy scrolling, zooming and – best of all – Flash support you might expect. Complex, Flash-enabled sites were reproduced accurately, though our own TrustedReviews homepage showed up some oddities. The Archos 5 also feels pretty nippy over my 802.11g connection. Maybe it’s the ARM Cortex processor and 128MB of RAM, but pages load rapidly and Flash content plays smoothly. Browsing on a screen this size should always be a pleasure, and that very nearly is the case.


Why nearly? Well, the Archos 5’s 4.8in, 800 x 480 TFT touchscreen has its good points and its bad points. On the good side it’s big, bright and really quite sharp. Definition is very good, and the reproduction of colour excellent for a portable device. Photos, when viewed, are as crisp and vibrant as you might hope for. Viewing angles are surprisingly wide. On the bad side, the actual ‘touch’ part of the equation needs some work, as the screen isn’t quite as accurate or responsive as (I hate to say it) that on the iPod Touch. 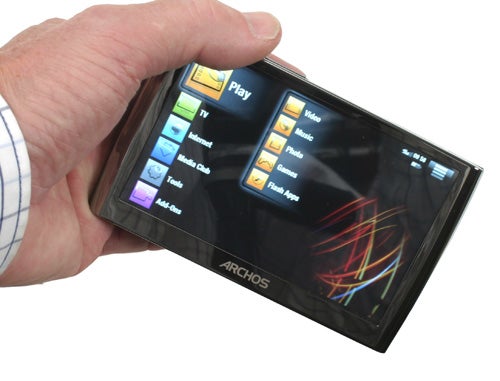 After a while you get used to the fact that the Archos needs a little more time and/or pressure than its rival, but it’s still a bit annoying. It’s also a shame that Archos hasn’t looked more carefully at Apple’s innovations in the touchscreen GUI. There’s little in the way of gesture recognition, even when there should be, and the onscreen keyboard – while perfectly decent – could really do with Apple’s little key-zooming trick to make typing that little bit faster. Hopefully Archos can deal with these complaints in future firmware updates. Doing so would make the Archos 5 every bit as nice to use as it is to look at.


Of course, when you’re watching movies the ‘look at’ bit is more important, and in this respect the Archos 5 is 90 per cent of the way towards being an excellent player. With good, well-encoded material it shines, the relatively high resolution and big screen meaning this is one mobile device you’d be happy to watch a whole movie on. The flipside of this is that it can show up the inadequacies of poorly encoded or low-resolution material, but you can hardly blame Archos for that.

MPEG-4 and WMV files up to DVD resolution are supported out of the box, but Archos has adopted a rather miserly policy regarding H.264, ASP, MPEG-2 and 720p WMV files; to play them you’ll need to pony up 15 Euros each for the Cinema, HiDef Video and Video podcast software plug-ins, or pay 30 Euros for the lot.


Archos’ defence is that users don’t pay for codecs they don’t need, but charging extra for what should be core functionality seems a little bit rich to us. At least format support is better on the audio side, with FLAC and OGG Vorbis added to MP3, WMA and WAV in a recent firmware update. It’s still a shame, though, that you’ll have to pay extra for an AAC and AAC+ in the event that you want to use those.

The Archos 5 doesn’t falter in the area where many previous Archos PMPs have fallen: sound quality. Even through the supplied earbuds the sound is vibrant and well balanced, with a nice line in instrumental detail and some power in the bass and mid range. Plug in some replacement earphones, like the Denon set I use for reference, and the sound rounds out nicely.


The mix of drums, strummed guitar and peculiar elfin vocals from Sigur Ros’ Gobbledigook has sounded better, as has the strident bass in the second song from the same album (you’ll forgive me for not even trying to type it) but only on players from Sony, iRiver and Cowon. Classical music and jazz are handled with finesse, and the choppy beats of Radiohead’s 15 Step had plenty of impact. If this were your main portable audio player you wouldn’t have anything much to complain about in terms of the output.

That said, you might have a little moan about other things. Given the high specification and big screen of the Archos 5 a little bulk and weight are acceptable, and 250g is the price you have to pay. However, battery life isn’t hugely impressive. Archos quotes 22 hours of music playback and 7 hours of video playback, and I’d put this a little on the optimistic side. My sample unit runs down after about 6 hours of mixed use, though that has included regular WiFi connections, which always drains cells. Personally, I don’t think a daily recharge is a big issue for a device of this type, but if you’re out on the road a lot without a charger (and note that one is not provided in the box) then you might want to consider something else.


All in all, the Archos 5 is very nearly a great product; a potential iPod Touch killer, if you will. You lose the wonders of multi-touch and the App store, trading off portability for a bigger picture, but you also get a higher capacity (between 60GB and 250GB depending on the model). Unfortunately, it’s all the little niggles that have run through this review that – taken together – give me pause before boosting the scores and slapping on awards. 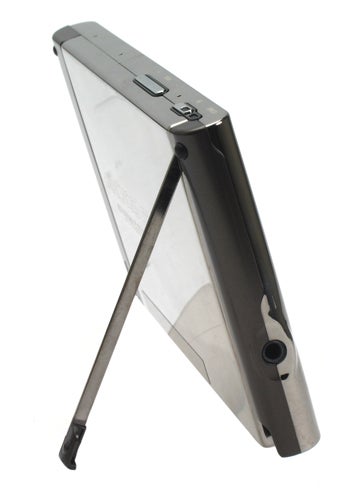 The touchscreen GUI isn’t perfect, the need to pay for add-ons is irritating and what you gain from the big screen for browsing and email in, you lose in ease of use. What’s more, the software seems a bit less reliable than I’d ideally like. I’ve had several freezes while working on this review, including one that could only be cured by a proper reset, not to mention intermittent problems with WiFi and USB connections. The most recent firmware fix didn’t sort these teething troubles out entirely, but I have hopes that future releases will.


Come on Archos, you’ve got a great piece of hardware here. Just iron out the bugs, polish the interface and stop charging for those vital plug-ins, and you might just have a winner on your hands.


A beautiful piece of hardware let down by a range of minor issues. If Archos can sort these out then it will have a great big-screen alternative to the iPod touch.