Best known for its premium, feature-packed PMPs, Archos made a determined effort last year to branch out, adding netbooks and tablets (including the Archos 5 Internet Tablet) at the high end, and a range of budget-conscious media players at the low end. The Archos 3 Vision we’re looking at (rather belatedly) today is arguably the most interesting of this latter group, going up against the likes of the iPod nano and Samsung YP-R1, but with a larger 3in, 16:9 format touchscreen and a very aggressive price point. Look around, and you can easily pick up the 8GB version for between £75 and £85. 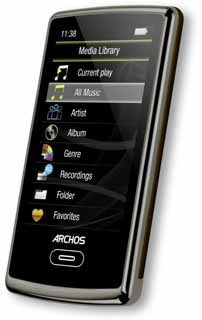 The good news is that, despite its price point, the Archos 3 Vision looks and feels like a very credible rival to the iPod nano – or even Apple’s more expensive iPod touch. With the Archos 5 and 7 Media Tablets, Archos ditched its old rather ugly, rather boxy style and embraced a curvy, sleek, minimalist design, and the Archos 3 Vision maintains this. From the front, it resembles a slightly shrunken iPod touch, with nothing bar the single menu button beneath the 3in touchscreen, and the glass panel covering the whole area. The edges are bare except for the headphone socket, power/hold switch and USB connector on the bottom edge. The back of the device is constructed from what feels like brushed aluminium.


The sample we have here comes in a cool, chocolate finish, but it’s also available in an eye-catching red, and in either colour it should draw a few admiring glances from kith and kin. While it’s impossible to describe any device with such a good sized screen as rugged, the Archos 3 feels very solid, and it’s also good to see that Archos has ditched its usual proprietary connectors in favour of a simple mini-USB socket. 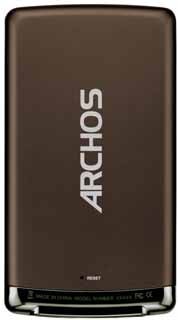 These positive impressions continue with the device switched on. The 3in LCD screen isn’t as startlingly brilliant as, say, the OLED screen on Sony’s X1060 Walkman, but it’s bright, clear and rich in vibrant colour, and the 400 x 240 pixel resolution is a good match for the size. When looking at photos or watching video there’s a sense that the screen hasn’t quite got the depth of tone and colour that some rivals offer, covering the extremes better than the mid-range, and horizontal and vertical viewing angles aren’t great. However, as a display for a single person watching video or browsing content on the train or plane, the Archos 3 screen is more than adequate. Let’s not forget: that X1060 Walkman is going to cost you more than double the price of this baby.


Unfortunately, things start to go awry when we come to the touchscreen – and the user-interface in general. The Archos 3’s resistive touchscreen isn’t exactly bad, but it can take a bit of prodding before it acts, and some basic functions – including changing volume or skipping from track to track – seem particularly hard to pull off. Physical controls might be a bit old hat, but at least they always work. Turning the volume up and down should never be a chore.

More seriously, the Archos 3 Vision is not the easiest device to browse content on. With no iPod Coverflow style system, all your content is organized into long, vertical lists, but while you can select an item just by pressing on it, there’s no facility to sweep the list up and down, or use scrollbars. Instead, a weird little circular device in the bottom right hand corner of the screen acts a bit like the old iPod scroll wheel, moving a selection bar and scrolling up and down through the list. To say this is imprecise is putting it mildly, and you often find yourself selecting the wrong option by mistake. It’s clear that Archos has put some thought into the UI, but on a basic level it doesn’t really work.

While, I’m moaning, there are other wrinkles. For instance, I dragged and dropped a selection of MP3, WMA and FLAC files over to the Archos 3. The MP3 files were correctly stored by album and artist, but the WMA and FLAC files were dumped in a folder marked ‘Other’. Worse, the MP3 files were listed by alphabetical order within their albums, and not in the running order the artist intended. This is really clumsy, basic stuff, and while the Archos 3 has a good-looking interface, with a choice of desktop backgrounds and a clean, modern feel, I’d rather have a more basic but effective UI any day.


The Archos 3 doesn’t come overstuffed with features, but that doesn’t really bother me. The voice recorder, FM radio, photo viewer and stopwatch are all simple but usable, and I can do without the low-quality games or notepad applications that some PMPs insist on packing in. The one ‘extra’ feature it does offer – a built in FM transmitter – is genuinely useful. It uses the headphone cable as an aerial, which means you need to keep your phones plugged in, but with the FM transmitter switched on the Archos 3 will transmit music directly to your car stereo or kitchen radio. 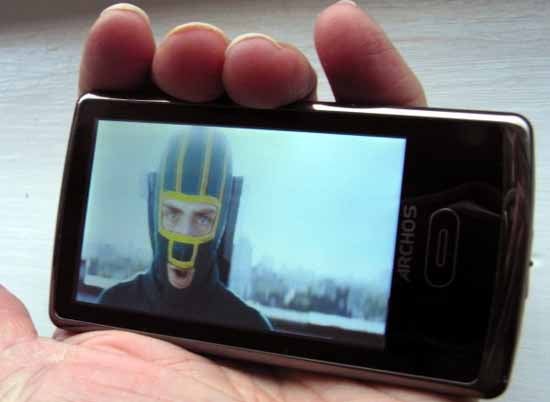 Most importantly, the Archos 3 delivers a good performance when it comes to audio and video playback. Now, to be honest I expected more in terms of video file format support. Archos doesn’t actually list which video formats are supported, but while DivX, AVI and WMV files at SD resolutions worked straight away, H.264 files in M4V, MP4 or MKV containers would not, and nor would the mobile WMV files downloaded from the BBC’s iPlayer service. On the plus side, this is still better than most PMPs on the market and, if you have ripped your DVD collection to DivX, then it’s great to be able to drag and drop files across without conversion.


Playback quality, meanwhile, is very good; smooth, glitch-free and perfectly watchable. In fact, the Archos 3 is one of the smallest PMPs I’ve come across where I could happily watch an hour-long TV programme or a short-ish movie on the thing.

Audio quality is even better. Once again, the supplied earbuds are virtually useless, though employing the bass boost preset in the MS equalizer will help a little, but with a set of wallet-friendly iGrados or Etymotic HF-5s the sound is punchy, rich and detailed. The Archos 3 has a few processing options, including a 3D sound option which widens the soundstage, though at the expense of mid-range depth, and a range of over-egged EQ presets. However, this is one of those players where you’re better off sticking with the flat ‘Normal’ setting or twitching the manual EQ settings to your taste. 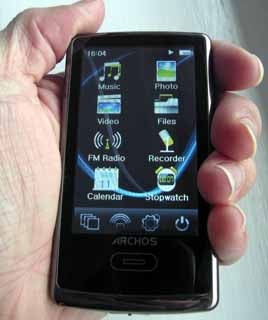 I’ve heard more clarity and sparkle from some Sony, Samsung and Cowon players, but the Archos did a great job with music ranging from The Dead Weather’s Horehound to Bill Evans’ Portrait in Jazz and Royskopp’s Junior, performing especially well with upfront, rocky material like Muse’s The Resistance or Pearl Jam’s Backspacer.


FLAC rips of Led Zeppelin’s Kashmir and Talk Talk frontman Mark Hollis’ single, self-titled album prove that the player can wring fine detail from uncompressed tracks, with an incredibly intimate, in the studio feel to the latter. As ever, though, I’m a little cynical about the benefits of FLAC on a small, limited capacity device. Is a negligible difference in audible quality really worth it? 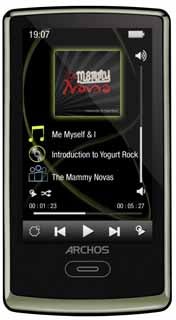 Finally, we come to battery life. Archos states 14 hours of audio and four of video, which isn’t great by today’s standards, and in actual use roughly ninety minutes of video and seven hours of audio was enough to drain the cells. This isn’t bad enough to be a deal-breaker, but it might affect the purchase decisions of anyone wanting to use a PMP for cross-Atlantic flights or long-distance train travel.


So what to make of the Archos 3 overall? Well, on the one hand it’s a player that looks, feels and performs better than you might expect given the price point, particularly if you want to watch video. Yet, on the other hand, it would be wrong to ignore the failings of the UI, the unresponsive touchscreen and the issues with H.264 files and iPlayer downloads. Sheer value for money could make it worth ignoring these if you want a cheap and effective video/audio player for your daily commute, but – much as I like the Archos 3 Vision – these things hold it back from a warmer recommendation.


A near miss for Archos. The 3 Vision offers a compelling combination of style, features and A/V performance for comparatively little money, but usability issues hold it back.