French firm Archos has been in the media player game right from the word go. Ever since the second half of the nineties it has championed not only portable digital music, but also digital video in a way that no other company has. And its most recent Generation 5 media players have set the standard yet again, with the 605 WiFi adding a touch screen, EPG and media streaming capabilities to the mix.


Which is why it’s more than a little surprising to find, alongside the all-singing, all-dancing high capacity widescreen Wi-Fi-equipped players, the firm has added a couple of mini, flash-based players to its line-up. It’s like Rolls-Royce suddenly deciding that it just has to produce a supermini. 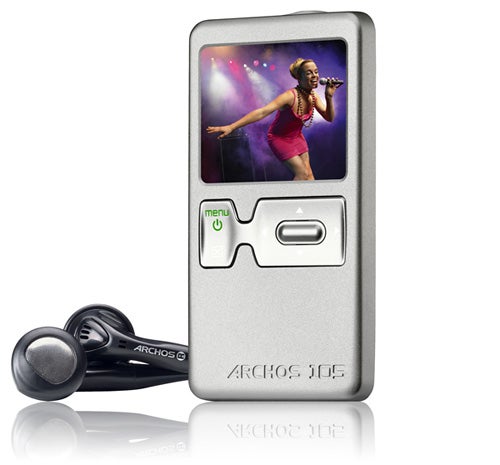 The smallest of these is the diminutive 105 and, once I got over the weirdness of it all and actually looked at the product, I was pleasantly surprised. It doesn’t look much in the screenshots and marketing images – it looks plain and boxy, and that odd X-shaped button in the middle doesn’t help matters – but in the flesh the 105 is actually a very nicely designed player. It’s constructed from soft-touch plastics which make it pleasant to hold and it’s remarkably thin and light too. At a mere 7mm thick, it certainly isn’t going to make a big bulge in your trouser pocket.


Other points in the 105’s favour are a bright 1.8in OLED screen and a user interface inherited from its bigger brothers and sisters. This means an attractive icon-driven interface, excellent on-device playlist creation and useful stuff such as the ability to switch between USB mass storage and MTP mode. Even the rather plasticky buttons in the middle of the player work better than first appearances suggest and make getting around the player surprisingly easy.

The controls are all clickable with a thumb for easy, one-handed operation and the unfussy approach means you’ll be skipping around folders, artist, albums and queuing up tracks in no time flat. It can’t quite match the elegance and simplicity of the iPod click wheel control, but it’s still pretty good.


But there’s a whole lot more to the flash MP3 player market than just looks these days. If your player can’t do everything under the sun except roast the chicken on a Sunday afternoon, then your goose is cooked…er…so to speak. And the 105, it has to be said, is a little underdone when it comes to pure feature count.


Let’s start with the capacity. Now I know that Archos isn’t used to producing flash based players, but 2GB is right at the bottom end of what’s acceptable for a video-capable player. There’s no chance of expanding this either. In terms of file format support it’s restricted too, with support for just MP3, WMA and WAV files for music – no OGG, no AAC, no FLAC – and it couldn’t play everything I threw at it either. 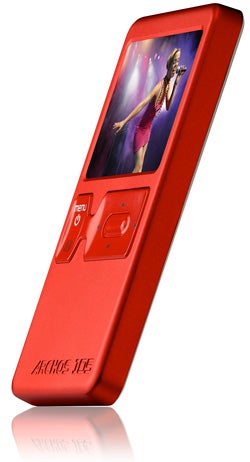 Video support isn’t brilliant with just WMV files supported, though this is less of an issue – you’ll have to re-encode video most of the time for the 160 x 128 resolution screen anyway. Finally, there’s no FM tuner and no microphone or line-in ability either.


All this would be forgiven if performance was good. But the 105 is clearly beaten by most of the competition on this front too. There’s nothing horrendously wrong with it: there’s plenty of detail on offer and enough balanced bass to satisfy most people – it’s just that there’s nothing particularly special about it either.


I kicked off the listening tests with Ayrshire rockers Biffy Clyro and noticed that everything just sounded a bit flat, with little drive and a disappointing maximum volume level. Moving onto Chicane’s bass-laden ”Behind the Sun” proved the point: there’s plenty of tight bass control here and a well-balanced sound, but no real punch.

Moving to quieter material and things don’t really improve much, with a low-level hiss becoming apparent that’s just impossible to ignore. This was most evident when listening to Pat Metheney’s atmospheric ”Map of the World” and you don’t have to have expensive headphones to hear it either. Anyone with a decent pair of noise isolating earphones will notice it, and it results in a top end that’s just a little bit over-harsh, with high hats and cymbals grating against the eardrum more than they should.


Compared to Sony’s NWD-B105 – one of the best sounding budget players I’ve heard – and Apple’s nano, the 105 lacks smoothness. Even SanDisk’s cheap-and-cheerful Sansa Express is a better listen. And the bundled earphones don’t help either: they sound ok in the mid-range and top end, but lack any kind of bass or coherence when the music gets complicated. 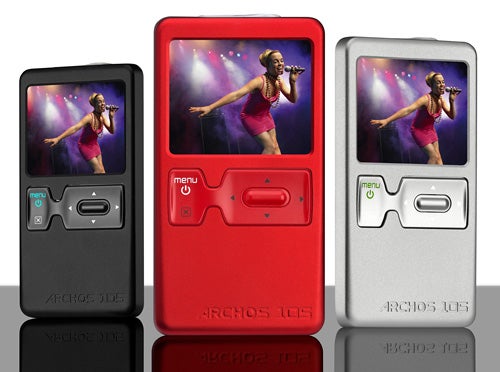 Of course one thing the 105 boasts that not many other sub-£60 players can is a colour screen and video playback. But again performance lets it down. Apart from the low resolution and small 1.8in size it has a slightly flickery quality that gave me a headache after looking at it for a while. It’s nowhere near as good as the iPod nano’s screen, for example, which boasts both higher resolution and rock-solid picture quality.


Archos’ 105 isn’t a bad player for the money. Just under £60 gets you an attractive, well-designed piece of kit, a reasonably-sized colour LCD screen and decent usability as well, all of which are hard to come by at this end of the market.


But it’s rather basic in terms of features and is a bit of a compromise too: it’s neither a brilliant music player nor a particularly practical pocket video player. If it was my choice I’d spend a little less cash and buy a music-only Sony NWD-B105 or Sansa Express, or stump up a little more cash for a player with a better screen.