The UDP411 is a high-end Blu-ray player from one of Britain’s most revered hi-fi brands. It uses high-grade components and luxurious build quality to deliver the very best video and music performance – a fact reflected in the hefty price tag.

The UDP stands for ‘universal disc player’, which means it’ll play Blu-ray, DVD, CD and SACD but not DVD-Audio. But discs aren’t its only concern – the network connection allows you to stream music and video from UPnP and CIFS devices too.

As expected the UDP411’s build quality is outstanding. At 6.2kg it weighs the same as three budget players put together, while the impenetrable all-metal bodywork feels like it could survive a nuclear apocalypse. Much of this heft comes from the critically damped top cover and chassis, which keep damaging vibrations away from the precious internal electronics. It’s rather chunky and will command more space in your AV rack than a budget deck, but that’s normal for a high-end player.

Looks-wise it has the unmistakable air of high-end esoterica – the moody black finish, thick faceplate, straight lines and minimal front panel controls. It’s a gorgeous deck, but in an understated way. That said, Arcam has gone to town with the logos, badge-checking nearly every format and feature on the front panel. A row of four buttons allows for up-close playback control, while a dot-matrix display imparts information in large green digits.

It’s surprising to find just a single HDMI output on the back – most high end decks provide two for users who wish to drive two displays at once (or, in a less likely scenario, for people whose AV receivers don’t support 3D/4K passthrough). The lack of multichannel analogue outputs is also surprising as many people still favour these over HDMI when listening to multichannel Blu-ray or SACD discs.

Still, you get two digital outputs – one optical, one coaxial – plus balanced XLR audio output, analogue phono out, USB and Ethernet ports, RS-232, a 12V trigger and remote input. There’s also a connection for the supplied Wi-Fi antenna if you want a wireless internet connection.

The UDP411 offers fewer eye-catching features than your average budget player, but that’s because Arcam focuses its attention on high-class construction and performance.

Its main claim to fame is ‘universal’ disc playback, which means it’ll spin Blu-ray (2D and 3D), DVD, CD and SACD platters. But the lack of DVD-Audio means it’s not truly universal.

You could argue that DVD-Audio is no longer relevant, but armies of audiophiles with stacks of DVD-A discs on their shelves would beg to differ.

The Arcam can upscale any video source to 4K, including video streamed from UPnP/CIFS servers on your home network. Supported files include AVCHD, AVI, MP4, WMV and XviD, but it won’t stream MKV and DivX files – MKV can only be played from USB drives. You can also stream MP3, WMA and hi-res FLAC audio files.

It’s slightly disappointing, if not wholly unexpected, that Arcam hasn’t thrown in any video streaming services like Netflix, YouTube or BBC iPlayer. While we admire Arcam’s desire to make Blu-ray playback its top priority, a couple streaming services wouldn’t have hurt at this price.

In fact, it’s worth mentioning here that the OPPO BDP-105D, the UDP411’s closest competitor, offers a decent range of smart functionality (Netflix, BBC iPlayer, YouTube), dual HDMI ports, multichannel outputs and DVD-Audio playback for around £100 less than the Arcam.

In terms of circuitry the deck takes a ‘short path’ approach from disc to output, which reduces the risk of unwanted artefacts, and uses broadcast-quality digital video clocks during the processing stage.

On the audio side the UDP411 employs a TI/Burr Brown PCM1794 192kHz/24-bit Delta Sigma digital-to-analogue converter, coupled with linear phase Bessel output filter and high precision re-clocking system. The drive, audio and DAC boards all have their own sub-regulated power supplies, allowing them to work independently and without interference.

Dolby True HD and DTS HD Master Audio soundtracks can be decoded and output as multichannel PCM, or you can simply pass the bitstream to your receiver.

Compared with new-fangled ‘smart’ players like the Samsung BD-J7500 with their flashy graphic-heavy menus, the UDP411’s simple operating system seems quaint. The main splashscreen looks nice enough, bearing the Arcam logo and slogan at the top with ‘Settings’ and ‘My Media’ icons at the bottom. A firmware update, which kicked in after we fired it up, jazzed things up slightly with fresh fonts and icons.

However, the Settings and My Media menus are bland grey text boxes that we’ve seen on countless players before. We know UDP411 is all about substance over style but we think Arcam could have made more effort at this price.

The ‘Settings’ menu lists the different setup categories – Display, Audio, Network and so forth. Each one covers a wide range of options, but surprisingly for a high-end player there are no video calibration tools. That’s probably a good thing though, as it means the deck delivers the purest pictures to your screen without unnecessary meddling.

‘My Media’ lists available network servers with an icon alongside each one – select one and work your way through the folder tree until you find your chosen album or song.

During playback, track details are listed but not artwork. Once a song is playing it’s not possible to skip back and browse the track list without stopping playback first. It’s all a bit clunky and old-fashioned but works well enough.

Arcam makes up for this with a terrific remote. It’s backlit so you can find buttons in the dark and the keys are placed exactly where your thumb goes instinctively.

The playback keys are coloured blue to make them stand out while the central direction pad is surrounded by frequently-used menu keys. Lesser-used buttons are clustered at the bottom, including volume and mute buttons for Arcam amplifiers. It looks nice, with slim dimensions and a brushed black finish. 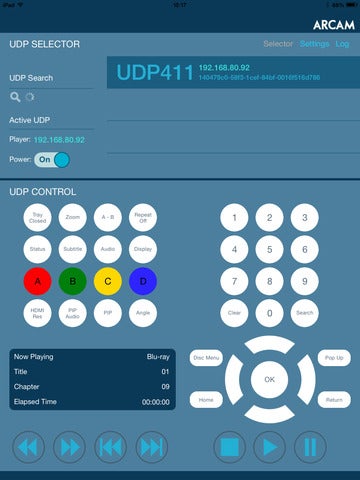 The deck can also be controlled using Arcam’s free iPad app, which looks simplistic but works a treat. The clearly-labelled buttons are squeezed onto a single screen, which means there’s no swiping between pages, and the deck responds to commands instantly. The presentation is clean and welcoming. The bad news is that the app isn’t available for the iPhone or Android devices.

In terms of disc loading, most titles took between 20-30 seconds to start playing although some, like Terminator Salvation, took almost twice as long. But in all cases the wait was acceptable.

The UDP411 knocks it out the park in terms of performance. We played Dawn of the Planet of the Apes at 1080/24p and the deck delivers the data to our 55in display flawlessly – the short path circuitry and lack of picture adjustments results in pure, unimpeded images.

And those images really are jaw-dropping. When the apes chase the deer through the forest at the start of the movie, precise CG detail punches from the screen and their quick, complicated movement is tracked with remarkable fluidity.

Later, when the apes descend on the humans’ territory to return the bag, the depth and three-dimensionality of the picture makes the scene look real. You almost want to reach out and ruffle Caesar’s fur.

There’s subtle nuance within blacks and skin tones, edges are crisply drawn and stronger colours look rich and vibrant. We know it’s doing exactly the same job as any other Blu-ray deck, but that doesn’t stop us being highly impressed by what we’re seeing. The same is true of 3D discs, which also make the journey from disc to screen without any unnecessary meddling, resulting in a sharp and immersive viewing experience.

DVD upscaling gives a more telling indication of a Blu-ray deck’s video processing power and as expected the UDP411 does a wonderful job. We loaded up Se7en – the scourge of MPEG-2 decoders everywhere – and when Mills enters the pre-credits murder scene, the deck tames block noise on the background walls effectively and keeps most other artefacts at bay.

Obviously the deck can only do so much with the low-res source material – particularly when blown up on a 4K screen – which means the image does look gauzy, but in general your SD disc collection is in safe hands.

The thing that really sets this player apart from budget decks is its first-rate audio performance. With the UDP411’s analogue outputs hooked up to our Onkyo AV receiver, we played a range of CDs including Michael Jackson’s Off The Wall and Graceland by Paul Simon and revelled in the deck’s smooth and richly detailed presentation.

Boy in the Bubble from the latter album bounces along with infectious energy – the tight, pounding kick drum and sweet hi-hats got our feet tapping. Simon’s voice has real presence as the joyous accordion, guitars and bassline dance around it. Individual instruments are purposefully placed within the stereo soundstage and conveyed with a sense of clarity that you rarely get from a Blu-ray player.

We had a OPPO BDP-105D on test at the same time as the Arcam and were able to do a straight comparison. There isn’t a great deal between them – these are clearly two audiophile decks operating at the top of their game – but we preferred the Arcam’s slightly smoother and more insightful presentation.

Should I buy the Arcam UDP411?

The UDP411 isn’t cheap, so does it do enough to justify the price? Yes and no. On one hand the deck’s superb audio performance is polished enough to put dedicated music players to shame, and it delivers pictures that’ll make your jaw drop.

And in terms of build quality and electronic design it’s an enthusiast’s wet dream, the epitome of high-end luxury. Network media streaming and SACD playback also make a welcome appearance on the feature list..

The problem is, Oppo’s BDP-105D does all this and more for a lower price, and given that there’s practically nothing between them in terms of performance we’d go for the Oppo every time. It offers a second HDMI output, access to online content, multichannel audio outputs and DVD-Audio playback, none of which are found on the Arcam.

The UDP411 is undoubtedly a top-drawer Blu-ray player but just doesn’t have the chops to topple its formidable high-end rival.

The UDP411 is a flawlessly built Blu-ray deck that offers sensational audio performance, but missing features and the brilliance of its cheaper rival denies it top marks