All-in-one systems are generally regarded as a low-cost, lower-quality alternative to separates, but Arcam is here to shatter that myth. Solo Movie is a complete high-end home cinema system in a single box, offering the convenience of an all-in-one without compromising on performance.

So what can it do? Well, inside this box of tricks is a built-in 3D Blu-ray/DVD/SACD/CD player, a 5 x 60W amplifier, HD audio decoders and DAB/FM radio. There’s built-in apt-X Bluetooth and Wi-Fi for network audio streaming, plus a range of connections on the back for all your other kit. It’s an all-singing, all-dancing entertainment hub – all you need to do is add speakers.

What sets it apart from lesser all-in-ones is its luxurious build quality and high-grade electronics, designed to deliver the best performance from any source you play. Solo Movie’s pre- and power amp stages are based on Arcam’s revered FMJ AV separates, while the disc drive and video sections are based on the UDP411 disc player. That’s a pretty good CV by anyone’s standards. 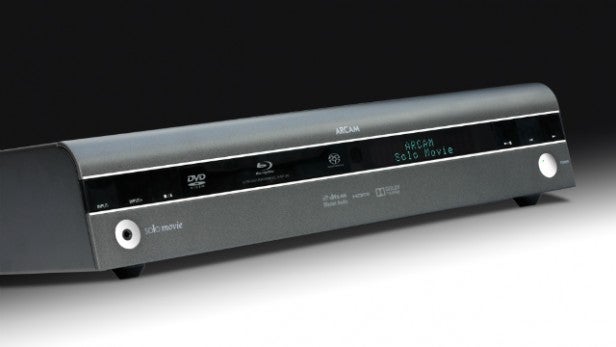 Solo Movie’s elegant, timeless design will look the part in any surroundings. The black all-metal bodywork oozes class with its curved top edge and gently angled fascia, while the silver buttons and stripes on the front panel inject a bit of glamour.

The Arcam’s build quality is exceptionally good. That’s to be expected at this price, but reassuring nonetheless. For starters, it weighs a back-breaking 11.5kg, plus the casing feels so solid and robust that you could probably drive a car over it without making a dent – but don’t try this at home, kids. Inside is a 300VA toroidal transformer and a huge extruded heatsink to keep the unit cool, as it doles out huge amounts of power.

Size-wise, it’s roughly the same width as your average Blu-ray deck, but its depth of 410mm means you’ll need a deep shelf to house it. On the front is a large dot-matrix display, which shows a decent amount of information without seeming cluttered. You can dim it or turn it off completely, which is good news if don’t want any distractions in a darkened room. 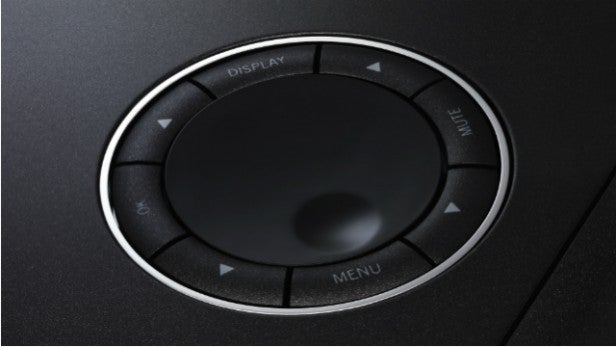 Either side of the display sit large playback and input selection buttons, while lower down you’ll find a silver-plated headphone port that looks like a posh Polo mint. On top is another cluster of buttons arranged in a circle, including a volume jog-dial and menu controls.

Socket spotters will find a decent selection on the back, including four HDMI inputs and one ARC-enabled output, but their v1.4b specification means there’s no support for 4K/60p, HDR or HDCP 2.2 – bad news if you want to pass through pictures from an Ultra HD Blu-ray deck.

It isn’t a major issue, since all 4K players come with dual HDMI outputs that allow you to pipe audio to the Arcam separately, but it’s slightly galling at this price.

They’re joined by optical and coaxial audio inputs, analogue RCA and 3.5mm inputs, a USB port for flash drive music playback, Ethernet and a subwoofer output. There are connectors for the Bluetooth, Wi-Fi and DAB/FM antennas, plus IR and RS-232 ports. Five pairs of sturdy binding posts are found on the right.

Solo Movie plays an impressive range of formats from disc, USB devices, or over a UPnP network. Starting with discs, it will spin your 3D/2D Blu-rays, DVDs, CDs and SACDs, plus the many variations of recordable CD and DVD. There’s no room on the spec sheet for DVD-Audio or 4K Blu-ray – although, to be fair, one of those is a rather niche, unfashionable format; and the other is DVD-Audio.

The Arcam will also stream FLAC, WAV and AIFF files up to 192kHz/24-bit over a network, plus MP3, WMA, AAC and OGG. You can also stream WMV, AVI, MKV and MP4 videos, all of which can be carried out using the Solo’s menu system and remote, or Arcam’s MusicLife app – more on that later. 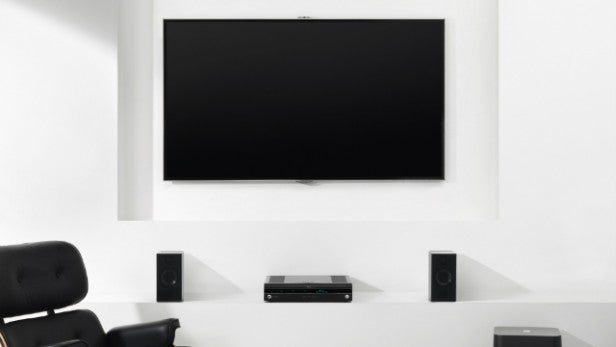 In a nutshell, it uses multiple power supplies rather than just one, so if the signal exceeds the capability of the first – during a big explosion or musical crescendo, perhaps – then the second one kicks in and takes it up to full power. Since it isn’t always drawing full power like a Class A amp, it’s a more efficient way of doing things.

There are on-board decoders for Dolby TrueHD and DTS-HD Master Audio, but as a five-channel receiver there’s obviously no Dolby Atmos or DTS:X, which are found on many cheaper AV receivers.

Fire up the Solo Movie and the on-screen menus have a distinctly old-school flavour. Most Blu-ray decks bombard you with bright colours and row upon row of flashy smart apps, but not Arcam.

Its homepage is a more sombre affair, with a simple splashscreen bearing the Arcam logo and four icons – Disc, My Media, Settings and Source. It’s clear and easy to digest, but feels like something from a bygone age. It even loads up a “BD Live loading” message when you insert a Blu-ray disc.

Select the My Media icon and a grey box appears in the centre of the screen, displaying available PCs and NAS drives on your network, plus connected USB devices and discs. The subsequent menus are painfully dull but logically arranged, listing tracks on the left, with cover art and metadata on the right. During playback, a full-screen display shows the track details against a grey background. 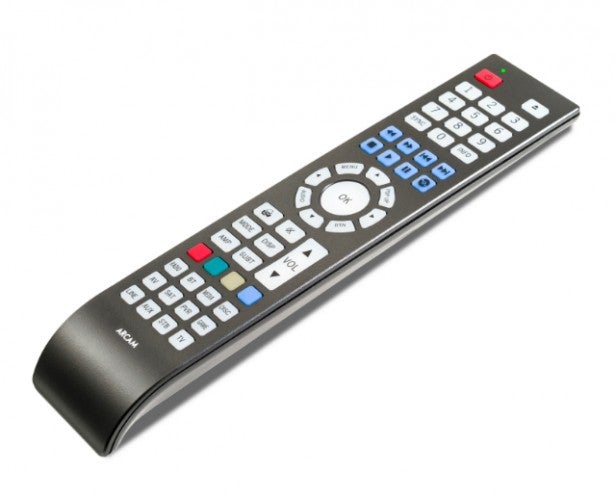 Presentation aside, the Arcam is an excellent streamer. Music starts playing instantly over a network, whether you’re using Wi-Fi or Ethernet. There were no drop-outs or buffering issues, and it searches through big libraries without any problems. As you scroll through the lists, you can jump 10 pages at a time using the track-skip keys, which is a really useful tool.

The Source option provides quick access to the entire range of inputs, while the Settings menu goes into a decent amount of detail. The lack of apps such as BBC iPlayer or Netflix is slightly disappointing – it would be great to see how Arcam’s electronics spruce up those video streams – but the licensing money is better spent on higher-quality hardware that boosts performance. And anyway, the lack of apps won’t matter if you already have those features in your smart TV.

The supplied remote is well made and weighty, with responsive backlit buttons, all clearly labelled to avoid ambiguity. The layout is spot-on – the direction pad falls right under the thumb with playback keys in close proximity, plus the-important volume controls are easy to spot. Each input gets its own key at the bottom, making it easy to skip to a particular source. Top marks.

Alternatively, you can use Arcam’s terrific MusicLife iOS app to control Solo Movie. The latest version offers integrated internet radio access alongside Tidal, Qobuz and Deezer, plus you can stream music from network servers. There’s even built-in Control4/Crestron control, making it suitable for custom install use. The only downside is that there’s no Android version. 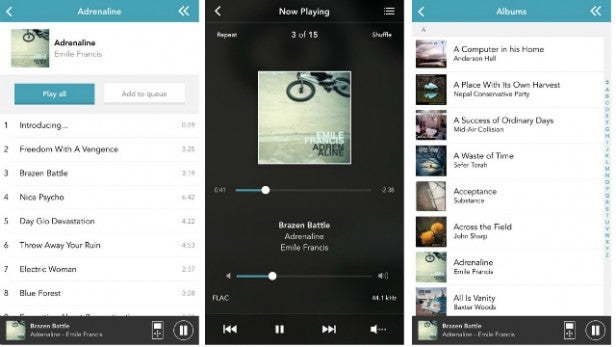 For all its quirks, the Solo Movie doesn’t mess about when it comes to Blu-ray playback. It delivers an intensely exciting performance with overblown action flicks such as Batman v Superman: Dawn of Justice, offering extraordinary dynamics, tons of detail, and the sort of monitor-like transparency you simply don’t get from cheap all-in-one systems.

The insane opening sequence is an absolute blast through the Arcam. As Bruce Wayne zooms round the city in his jeep as the city crumbles, it lends serious weight and attack to the explosions and toppling buildings. Mid-range effects are forceful yet well-rounded, side-stepping any brashness. The engine has a throaty rasp, while shattering glass sounds clear and crisp.

The use of Class G amplification has tangible benefits. The Arcam’s sound is effortlessly muscular and huge in scale, but never feels like it’s straining – even when driven at high volumes. Watch our superheroes scrap with Doomsday up loud and the Arcam handles the carnage with the utmost composure.

What’s most impressive is the sheer transparency of the sound. Bangs and crashes aren’t an amorphous noise – they’re detailed and layered. It teases out the high-frequency minutiae that goes missing through cheaper electronics. That extends to dialogue, too: Ben Affleck’s narration during the prologue is adorned with subtle sibilance and a soft rasp that makes it sound real.

Everything is beautifully integrated. The bass channel melds seamlessly with the other speakers, giving an impressive sense of solidity. And as Superman zooms through the skies, the swooshing effects are steered between channels with great fluidity and tonal consistency. That makes it easy to lose yourself in the action.

It’s a fabulous movie performer then, but given Arcam’s rich hi-fi heritage it comes as no surprise that it’s highly musical too. The system’s inherent transparency again comes to the fore, allowing you to hear every detail in the music. Superb transient response, metronomic timing and tight bass notes breath life into any track.

Agile and accurate, the Arcam keeps complex rhythms in its pocket. Its immense power and superb dynamics make Nirvana’s “Smells Like Teen Spirit” on CD feel deliriously exciting when the anthemic chorus kicks in. Stunning clarity allows every part of the song to be heard without clouding the melody. 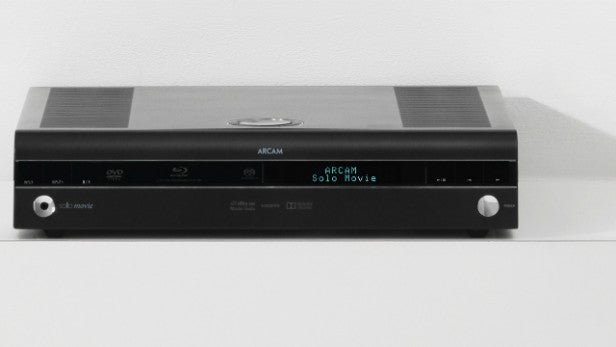 Should I buy the Arcam Solo Movie 5.1?

If sound quality is of paramount importance and you have little interest in cutting-edge bells and whistles, then Solo Movie could be a worthwhile purchase. It delivers a superlative 5.1-channel performance, belting out movie soundtracks with huge power, exquisite detail and a terrific sense of scale. Its excellent transparency, cohesion and insight also translates into dazzling music playback.

What’s more, design and build quality are of the highest order, it plays a wide range of formats, and is a joy to use – despite the old-school on-screen displays. Playback is smooth and hassle-free, whether you’re spinning a disc or streaming hi-res files from a NAS drive.

But there’s no getting round the fact that Solo Movie feels slightly dated. The absence of video-streaming services such as Netflix is forgivable, but the lack of future-proofing might put off some buyers.

The HDMI ports don’t support 4K/60p, HDCP 2.2 or HDR, which is no good if you want to pass through pictures from a UHD Blu-ray deck. There are ways round it, and many people simply won’t care anyway, but if you’re spending over two grand on a new system then it isn’t  unreasonable to expect the very latest spec. As a result, some people might be tempted you to check out cheaper AVRs that throw in a lot more.

Solo Movie’s feature list might be stuck in the past, but there’s no denying its mind-blowing 5.1 performance and extraordinary build quality – which mostly justify that wallet-busting price tag.