What is the Arcam Solo Bar Plus?

Solo Bar Plus is a modified version of Arcam’s debut soundbar, which launched at the tail end of 2014. Its astonishing feature list, stunning design and refined sound secured it a positive 9/10 score in my review, but I remarked that the Solo subwoofer designed to accompany the bar lacked power and punch over its wireless connection.

What’s more, when bought together the Solo Bar and Sub totted up to a bank account-bothering £1,300, which is a lot for even the most ardent Arcam supporter to swallow.

Arcam has taken this all on board and made some changes. It’s tweaked the software to improve bass performance in the system’s Movie mode and re-voiced the bar to improve high-frequency performance. But the best part is that Arcam has reduced the combined price to a more reasonable £995.

As you’d expect from Arcam, the Solo Bar Plus is beautifully built inside and out. It packs high-end circuitry and components from the company’s AV receivers into a rigid aluminium enclosure engineered to prevent and dispel resonance.

It’s effortlessly stylish, boasting a curved matte back-end and eye-catching silver trim dividing the front speaker grilles and central display panel. On the downside, it’s bulkier and taller than most soundbars – at 130mm high it covers up my TV’s IR sensor when placed on top of the stand. Thankfully Arcam has included an IR repeater function that passes on remote commands to your TV. Alternatively you can mount the Solo Bar on the wall using the keyhole fixings on the back.

On the front is a row of buttons and a large dot-matrix display that spells out inputs, volume levels and audio formats. It’s easy to see from the sofa and makes life easy when making adjustments.

The Solo Bar remains the best-connected soundbar on the market, offering four HDMI 1.4 inputs – still the most we’ve seen on a soundbar – and an ARC-enabled output. They pass through 3D and 4K signals and even support 4K up to 60Hz at 4:2:0 colour space, although the lack of HDCP 2.2 might prove problematic going forward.

You’ll also find coaxial and optical digital inputs, a 3.5mm minijack input and a subwoofer output should you prefer to connect the Solo Sub (or a third-party sub) via cable. A socket is provided for the supplied setup microphone and there’s a USB port for software updates. The connections are housed in an open recess that allows the cables to hang down when wall-mounted.

Arcam’s sub is taller than most, but it’s so stylish you won’t want to hide it away. Its classy grey matte finish and curved corners are easy on the eye, plus its wireless connection means you can place it anywhere (as long as it’s near a plug socket). Thick rubber feet on the bottom absorb vibrations and create a gap for the woofer.

A panel of controls on the back lets you optimise the sub for use with the Solo bar or a different amplifier. They include volume, crossover and crossover Q dials (the latter controlling the steepness of the low pass filter curve after it crosses over with the soundbar) plus a button to invert the phase.

A year on and the Solo Bar Plus still offers the best range of features on the market. There’s hi-res Dolby True HD and DTS HD Master decoding, ensuring the best possible sound quality when playing Blu-ray discs.

Built-in Bluetooth with apt-X allows you to stream music from phones and tablets, as well as sending sound from the bar to Bluetooth headphones – ideal for late-night listening.

The Solo bar uses four 4-inch mid/bass drivers and two 1-inch tweeters, which are angled outwards by five degrees to achieve a wide dispersion. The mid/bass drivers receive 40W while the tweeters receive 10W, resulting in a total power output of 100W. The sub is equipped with a 300W amp and a down-firing 10in woofer.

The Movie and Concert modes add ‘mild spatial effects’ and there’s Auto Loudness Control (ALC) too. It’s worth pointing out that anyone who bought the original Solo Bar and Sub can upgrade the software for free by downloading the v1.19 update from the Arcam website.

Don’t let its high-end status fool you – Solo is as easy to install and operate as any budget soundbar. The first thing you need to do after powering it up is run the Auto Setup system using the supplied microphone (another feature you won’t find on many soundbars). It runs a series of test tones to find the appropriate speaker levels and crossover frequency with the sub, as well as applying filters to rectify resonant frequencies in the room.

Day-to-day operation is simple thanks to a clear, informative display panel. It houses a full setup menu, where you can set the subwoofer level and check the EQ settings. An onscreen display via HDMI would have made things even easier (a la Yamaha), but thankfully the menus follow a logical sequence and work intuitively.

The subwoofer doesn’t pair with the soundbar automatically – you have to manually link them using the setup menu and a button on the back of the sub. You only have to do this once though.

The supplied remote doesn’t match the quality of the soundbar itself – it’s light and plasticky with insubstantial clicky buttons. Thankfully, the sensible button layout and clear labelling make it easy to use – there are direction, volume and input keys, plus buttons for ALC, sound modes and the setup menu. 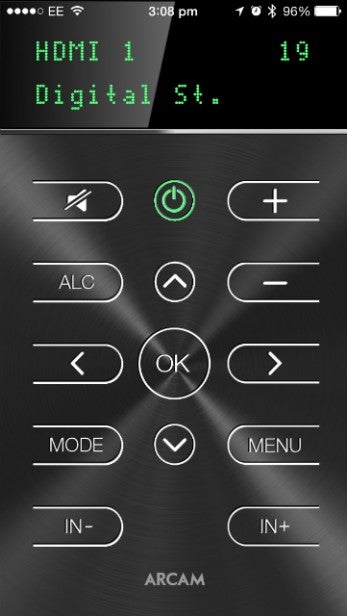 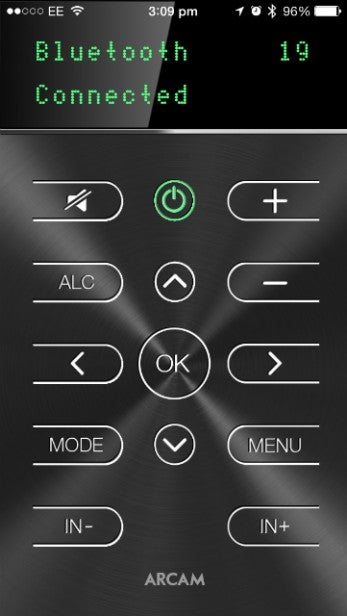 Arcam’s free Android/iOS smartphone app provides an attractive facsimile of the physical remote, as well as repeating the information on the front panel display. But that’s all you get – there are no visual tools for tweaking the EQ or changing sound modes, for example, and because it’s controlled via Bluetooth you can’t stream music while using it.

In action, there are distinct improvements to the Solo Bar’s performance, particularly when it comes to top-end crispness and attack, but some of the old problems still remain.

Playing Jurassic World on Blu-ray through the HDMI ports, the bar delivers a remarkably clear and open sound with sparkling high frequencies. Arcam has re-voiced the bar to give the sound more ‘life and air’, and you can hear this as the squawking pterodactyls burst from the aviary and in the ambient hum of the forest. The angled tweeters evoke a terrific sense of width and separation.

Detail reproduction is first rate. There’s a pin-sharp rustle as dinosaurs creep through the undergrowth and a raspy chug as Indominus Rex sniffs out its prey. The bar’s ability to tease out these small details makes for an insightful, absorbing listen.

Music really benefits from Arcam’s tweaking. Michael Giacchino’s score is a delight – the sweeping strings are lush and flutes have an airy, natural quality. CDs and Bluetooth-streamed music also sound superb, offering the rich texture, balance and neutrality of a good hi-fi system. 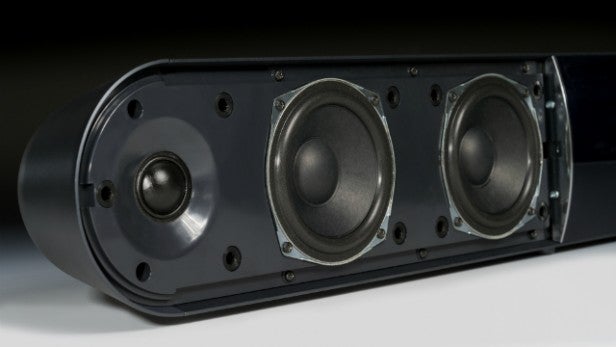 What’s more, Arcam’s re-voicing adds attack and dynamism to the bar’s performance, making things even more exciting when the action hots up. Aptly there’s plenty of bite when the raptors snap their jaws, while the security team’s gunshots snap fiercely. When Indominus Rex shakes the kids from their gyrosphere, shattering glass pierces the soundstage.

Impressively, the soundbar does this without a hint of stridency or colouration, not even when pushed to high volumes – a benefit of that rock-solid cabinet. What you get is a transparent sound with admirable drive, precision and clarity. There’s drama and excitement, smooth panning and lucid dialogue. Voices are laced with detail and remain easy to distinguish amid busy action scenes.

Last time round I thought Stereo mode provided the best overall balance but here I prefer Movie mode with its greater width and punchier bass. I still think the Solo Bar could muster more bass when used without the sub – the Q Acoustics M4 and Paradigm Soundscape offer a bigger, more muscular sound – but Arcam has certainly improved on its predecessor on that score.

However, the Solo Sub once again left me frustrated. When connected wirelessly, there’s a reasonable sense of weight as T-Rex and Indominus duke it out at the film’s finale, but it’s by no means the deep, floor-shaking bass I was expecting. Similarly, when the helicopter crashes into the aviary, the explosion is solid but underwhelming, struggling to compete with the dominant midrange and treble.

I tried a variety of crossover points and slope settings, played with the volume levels and toggled through the sound modes but couldn’t find a satisfying solution.

However, when I switched to a wired connection (using the sub’s LFE input), everything changed. Suddenly I could hear the ‘slam and impact’ that Arcam was talking about – bass notes go lower and punch harder, while integration and balance are better.

Of course, none of this is a problem if you don’t mind using a cable, but it might disappoint anyone hoping for the convenience of a wireless connection. 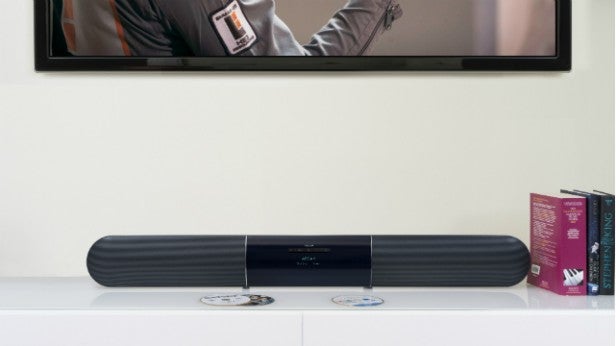 Should I buy the Arcam Solo Bar Plus?

The Arcam Solo Bar Plus remains an impressive soundbar thanks to its incredible feature list, jaw-dropping construction and polished performance – made all the more compelling by its new sub-£1000 price tag and sonic tweaks that add clarity and attack to movie playback.

There are a few caveats though, such as the sub’s wireless performance, which for some reason lacks the power and depth of a wired connection, as well as the limited app and lightweight remote. But on balance there’s still enough good stuff here to merit a grand of anyone’s cash.