The Arcam rPAC is a USB, bus powered DAC (digital to analogue converter) and headphone amplifier that forms part of Arcam’s new ‘R Series’ line of streaming music products – which also includes the excellent drDock. The rPAC has a very simple purpose: make listening to music from your computer better. How it achieves this is rather complex, but you wouldn’t guess that from the setup or design. 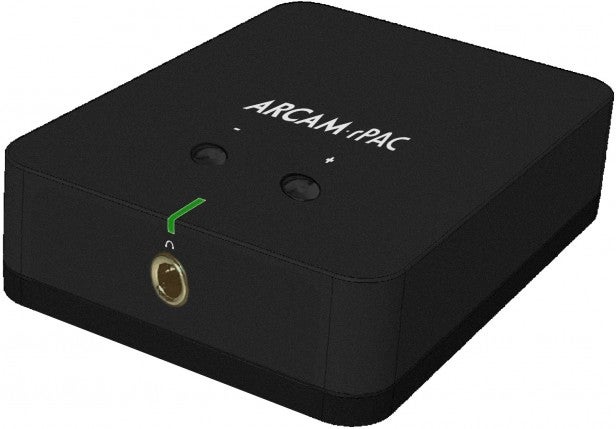 Out of the box the rPAC is perhaps the most basic looking device you will see this year. It is a 100 x 62 x 25mm rectangle with USB power and RCA sockets on one side and a 3.5mm jack on the other. On the top are plus and minus volume buttons and a discrete LED which is red when plugged in, switches to green when processing audio and flickers to acknowledge volume adjustment.

”’Construction and Setup”’
Despite this minimalism Arcam has continued the good work it started on the drDock as the rPAC is exceptionally well made. The exterior is heavy cast aluminium with a tasteful matt black finish and a damped rubber base. Much like a heavy bottomed glass, the weighty construction (it tips the scales at 300g) feels good in hand and, as the rPAC will most likely live on a desk, makes it mechanically stable and means it isn’t easily knocked over or out of place. We suggested the drDock paid homage to the design and finish of the Apple TV and this is even more apparent here.

You won’t need the instruction manual to get setup. The rPAC takes its audio source digitally via USB along with its power so there are no additional messy cables and no wall socket is required. The internal DAC then performs its magic and the audio can be output through either the 3.5mm jack to earphones or via a standard RCA lead (bundled) to an AV system. There are no drivers to install, but both PC and Mac users will need to change the settings in Control Panel (Windows) or System Preferences (Mac) which tells the computer to route audio to the rPAC instead of through the internal sound card.

All this is very nice, but as a one trick pony the rPAC lives or dies by its DAC so let’s take a look at the internals…

”’Specifications”’
At the heart of the rPAC is a TI Burr-Brown PCM5102 DAC chipset, the same one used to such good effect in the drDock. Arcam throws out numerous stats which certainly look good on paper (see below), but the highlights are the support for 24bit depth, sample rates up to 96kHz, a frequency response of 10Hz to 20kHz and headphone output power up to 138mW – enough to power the vast majority of headphones without issue.

On top of this is RF suppression which combats the interference created by high frequency radio bands inside a computer from the likes of the power cables, ports and the internal microphone. The cherry on the top is the inclusion of asynchronous USB which reduces the noise and jitter associated with USB music sources. This problem occurs due to the computer being responsible for the timing in the playback. Asynchronous technology bypasses that by using its own precision clock circuits to control the timing inside the DAC. 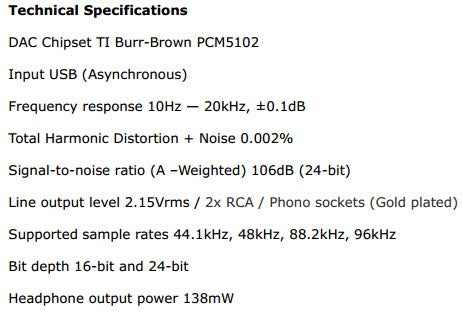 ”’Performance”’
Upgrading from a typical onboard sound card to the rPAC results in immediately obvious improvement across the board. Like the drDock, the rPAC brings greater clarity, depth and deeper, more resonant bass. Moreover, the general background hiss and audiological grime that poor quality computer audio is covered in is essentially eliminated. A crude analogy would like listening to music from behind a closed window then opening it. 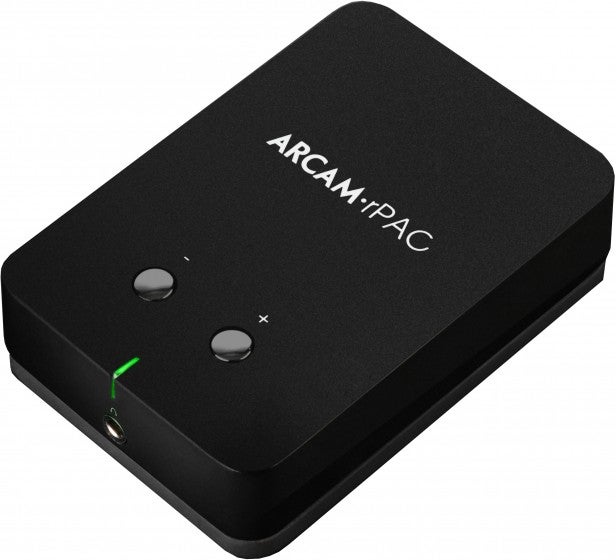 If we can level a criticism it is that the treble does occasionally sound a little shrill, but we found this only on tracks with particularly wild sonic make-ups such as A Lily’s ‘Lights Shone Brighter, My Delicate Sun Is My Sparklin’ Sun’ which is hardly representative of the vast majority of music!

It should also be noted that the rPAC isn’t only at home with music. Any audio emanating from your computer will be given the once over, so it will enhance everything from streaming video services like Sky Go, and BBC iPlayer particularly when watching good quality content like films on the former and nature documentaries on the latter (not to mention Later With Jools Holland). Internet Radio also receives a welcome and much needed boost whether it is music focused or simply conversation based like BBC Radio 5 Live. In short we found no situation where our computer’s audio output did not enjoy substantial benefit.

”’Criticisms”’
While we were hugely impressed with the rPAC’s overall audio performance we did find a couple of areas worth dwelling upon. The first is the lack of a mute button as we found ourselves having to reach for the pause button on whichever player we were using whenever we were asked a question by a colleague or thought we heard the doorbell or the phone ring at home. ”Correction: mute is available by simultaneously pressing both volume buttons, though it does require very precise timing.”

The second element is the limited nature of the functionality. The rPAC may be superb at its single task, but in doing so it is inherently and stubbornly inflexible. Take for example the Fiio E17 which not only performs the role of the rPAC, but also has a built in 1500mAh battery delivering up to eight hours of use on the move. On top of this it has SPDIF output and a digital display with (admittedly limited) adjustable equaliser all for less money. 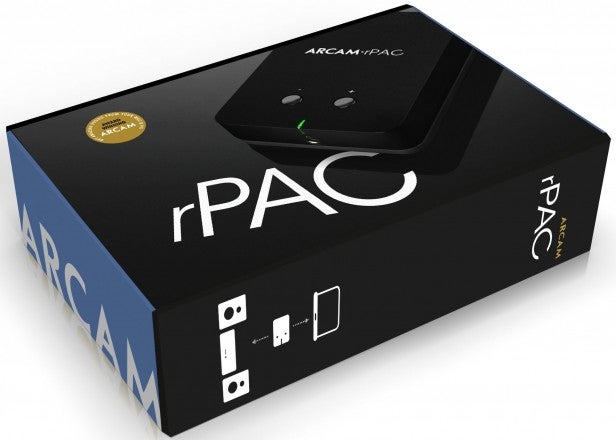 ”’Pricing”’
So the big question is whether the rPAC is worth the expense. Despite the arguments laid out above we would say a qualified, yes. While the rPAC does take a further step up the audio quality ladder, it’s going to be overkill for many users. Unless your computer is hooked up to a Hi-Fi costing thousands, or your headphones are of the £500-plus calibre, the upgrade to something like the E17 should be sufficient.

That said, while the price of the rPAC may look high it is worth noting it hits a new price low for a device incorporating asynchronous USB, a feature usually reserved for DACs at more than twice the price and streamers in excess of £1,000. Do you need it? Well, again it depends on the level of your existing audio equipment, but we’d certainly be tempted. Value is very much in the eye of the beholder, but from this perspective the rPAC is a bargain.

”’Verdict”’
The rPAC’s laser-like focus won’t be for everyone, even some looking for a DAC, but it ignores the jack of all trades approach to become a true master of one. Like all Arcam’s new R Series products the rPAC marries this performance with exceptional build quality and brings asynchronous USB to a new price low. You’ll have to be seriously into your audio to make the most of the rPAC but if your ears and equipment match up, it delivers in spades.