So does it work? Well tomorrow we are trying ketchup on our Cornflakes, double checking Linus Torvalds isn’t on the Apple board and putting a reminder in our calendars to camp outside our closest Ferrari dealership on Boxing Day. Because what Arcam has pulled off with the rBlink is a minor miracle.

In its optimum configuration streaming 320Kbps music from an aptX device sound quality is indistinguishable compared to a wired connection using lossless files to all but the most highly trained of ears. Music is rich, deep and there is a complete set of satisfying lows, mids and highs beautifully fleshed out by the PCM5102 DAC. 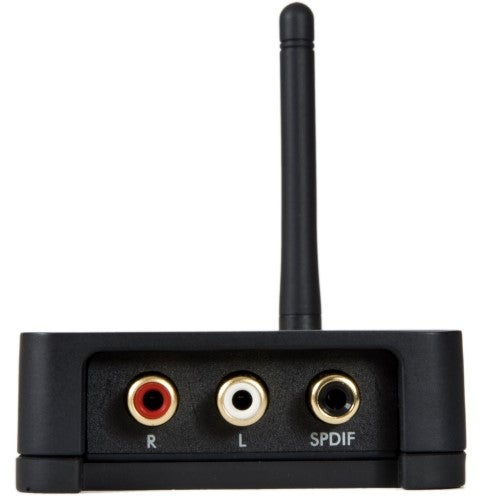 Furthermore, distortion and jitter are a non-event thanks to a clever failsafe. When a device is paired with the rBlink a small light on it turns blue. When you hit play on your device it tightly synchronises with the Bluetooth link and only then begins playback. This is near instantaneous and any time you pause music the rBlink light will turn purple to indicate this and then re-sync again for good measure.

Step down to AAC streaming (AAC being iTunes’ retail music format of choice) and the drop-off is surprisingly negligible thanks to the DAC’s wizardry. In fact we’d say when the rBlink is connected to mid-range speakers or even premium docks that is where your bottleneck will be.

Drop to standard 128kbit Bluetooth and the quality reduction does show. Bass is actually still well served, but detail starts to be lost and this is noticeable particularly on a decent set of speakers. Then again even at this setting it is Bluetooth unlike anything you have heard before aside from aptX. 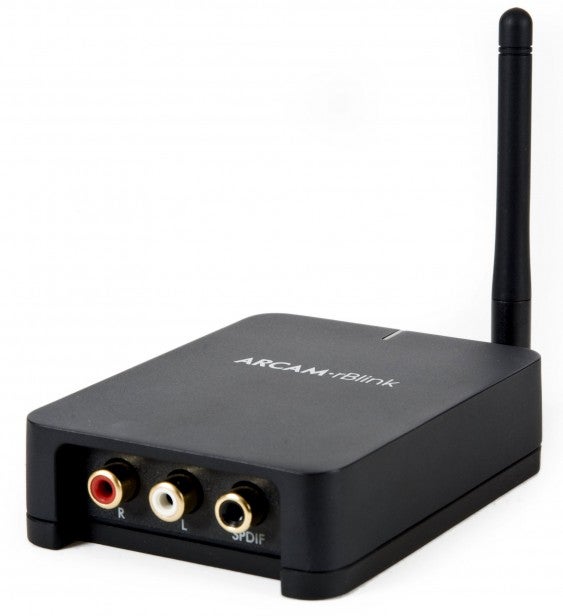 Given its performance it is no surprise to find the rBlink comes with a hefty £159.99 (which includes a two year warranty). This would seem a crazy amount to spend on Bluetooth audio were it not for the remarkable results. Crucially it also breathes new life into wired equipment, and while an AirPort Express will do the same for £80 with lossless AirPlay, Arcam’s solution isn’t restricted to Apple hardware and software, is far easier to setup and doesn’t suffer AirPlay’s frustrating two to three second playback delays.

If we do have a gripe it is a minor one and that is why with the launch of the rBlink that the other Arcam r-products need to exist. Both the rPAC (a USB-powered DAC between laptops and earphones), rLink and rBlink could be merged into a single product if just 3.5mm, coaxial and SPDIF input connectors were added to the rBlink. Yes each product does its job superbly, but at almost £150 apiece it would be nice to have a single multi-functional product.

The Arcam rBlink pulls off the impossible in marrying Bluetooth with ultra-high quality audio. The match is most show-stopping between aptX devices, but even humble 128-kilobit files over the standard SBC codec are given a jaw-dropping new lease of life. Happily the rBlink also looks good and takes seconds to set up. The £159.99 RRP is considerable, but it rejuvenates expensive wired-only setups using a standard with unmatched flexibility.