The Arcam drDock is the curiously named new addition to Arcam’s iPod dock lineup. Succeeding the irDock and rDock it greatly expands upon both, adding a host of useful features. Its raison
d’être is to be the quality interconnect between your iPod, iPhone or
iPad and a high end AV system and/or television. To do this it features a
built-in DAC as well as SPDIF, analogue and (for the first time) HDMI outputs. It will also charge your iDevice and
synchronise it with iTunes over USB. This is quite the feature list but, as with its award winning speaker dock the Arcam rCube, the company has delivered in spades. 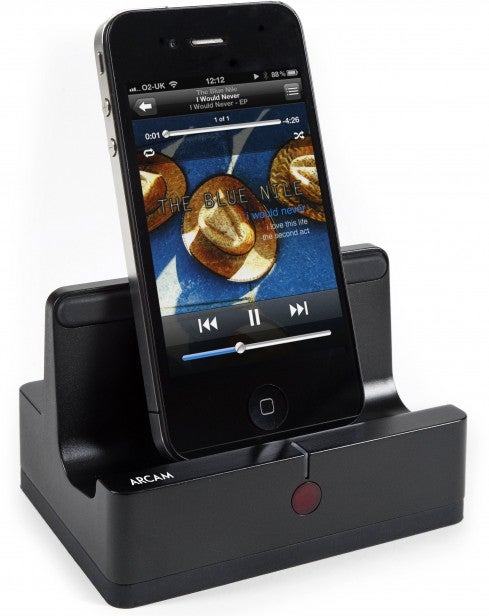 The
most obvious place to start is the design. The drDock is part of a wave
of new ‘R Series’ products from the company (which includes the ‘rDAC’
which we will review in a few days) and they feature a unified aluminium
construction and matt black finishes. In photos the drDock looks good,
but in hand the build quality is exceptional. Arcam has pulled out all
the stops to give the drDock a premium feel, and it succeeds. The
overall effect is a little akin to the
Apple TV with clean lines and a full rubber base (rather than cheaper
rubber feet) which adds solidity and a feeling of quality. The
connectors are beautifully carved out too with the SPDIF and analogue
connectors finished in signal-friendly gold.

The design has also
been radically altered. The sunken well connector of the irDock and
rDock have been removed so that iPod touch, iPhone and iPad devices can
all sit comfortably. Interestingly the irDock is also surprisingly heavy
(415g) which, while not usually a desirable quality in gadgets, is
ideal here as an iPad can dock comfortably without feeling like it may
topple over at any moment. 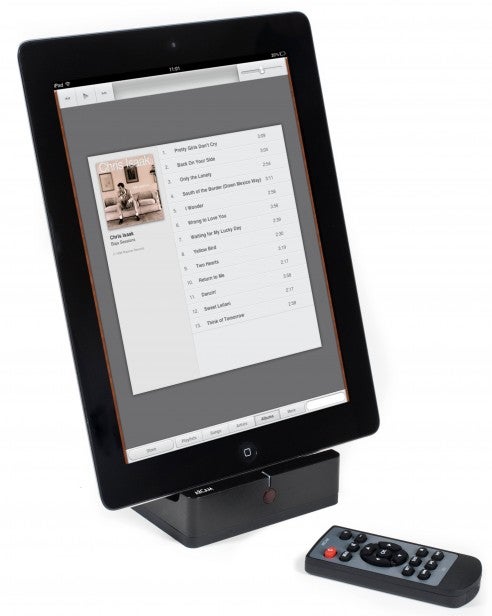 That’s the outside, so what about the inside? The beating heart of
the drDock is Arcam’s internal Burr Brown DAC, a model used across the
new R Series. The DAC takes any iDevice out of the equation by stripping
the digital audio before it hits their inferior circuitry and
processing it directly before sending it on to your AV system or TV.

Also
worth a mention is the drDock remote control which past models have
lacked. It isn’t much of a looker but is no bigger than a couple of
thumb drives and yet outdoes many larger remotes for functionality as it
has full support for the music menu system on iOS devices as well as
repeat and shuffle functions plus the usual power, mute, play, pause,
skip/seek and volume buttons.

In short, all the ingredients are there and we are pleased to report they come together impressively.

What must be said from the off is the drDock is a product for the mature audiophile. It assumes you already have the high end AV system and/or top notch TV (ideally) with surround sound system… and if you do you will be in dream land.

Arcam has a well established tradition for producing top notch DACs and here it again lives up to its reputation. By taking the circuitry of an Apple device out the equation the drDock’s DAC (try saying that 10x fast) is able to process the files without interference. Attach it to a good HiFi with some quality speakers and the DAC adds noticeable richness, drive and detail compared to the bog standard delivery from the iPod/iPhone/iPad alone. Most impressive is the boost to the midrange and bass which bring markedly improved depth and with it a keenly felt layer of emotional involvement. Certainly tracks with high quality encoding (lossless or 360Kbit and 256Kbit) benefit most, but even lowly 128Kbit files are transformed.

Use the digital SPDIF output and you’re of course reliant on whatever DAC you use further down the line in your AV setup, but it’s a useful addition for if you want to feed your device’s audio to multiple rooms, for instance. 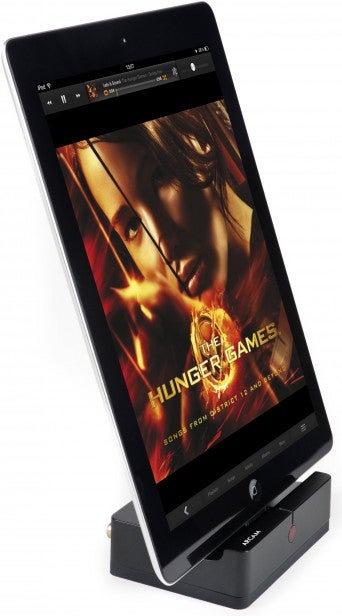 As for video you simply connect the drDock to a TV via an HDMI cable (the only cable not supplied by Arcam), select the correct TV input and start video playback. Here Arcam does no massaging of the picture (or audio unless you bypass your TVs audio and plug the analogue outputs straight into your Hi-Fi), but this is understandable as TVs do their own processing and combining the two would likely be messy. As such Arcam gets no specific brownie points as the quality will be
down to the quality of the original recording and the TV itself, but the
functionality is useful. For example it will output video from YouTube
and most video apps, including AirVideo which streams videos of any
format from your PC or NAS to an iPhone with live conversation making
the drDock something of a stand-in media player. There are exceptions such as Skype video calls and (sadly) Sky Go, but with both apps also not streaming over AirPlay their output is clearly locked down by the developer.

In terms of quality, the drDock outputs your iDevice’s natural resolution so pre-Retina Display output is low quality, but an iPhone 4/4S looks good and responds to double tapping on the iPhone to fill the TV screen. Meanwhile the huge 2048 x 1536 of the new iPad is scaled down to fit a 720p or 1080p screen automatically and here results are excellent. There is a gap between it and native HD or Blu-ray content, but it is certainly good enough to enjoy a movie or impress some mates. It may not be as complete as Apple TV (there is no Mirroring), but it is a handy and even faster way of getting video onto your big screen.

What about docking? It does what is says on the tin: connect the drDock via USB to a laptop or PC and it allows devices to sync and charge (excluding iPads which require mains charging). Arguably syncing is a secondary consideration for many these days given the wireless syncing and iCloud automatic backups which are a core part of iOS, but it remains nice to have. 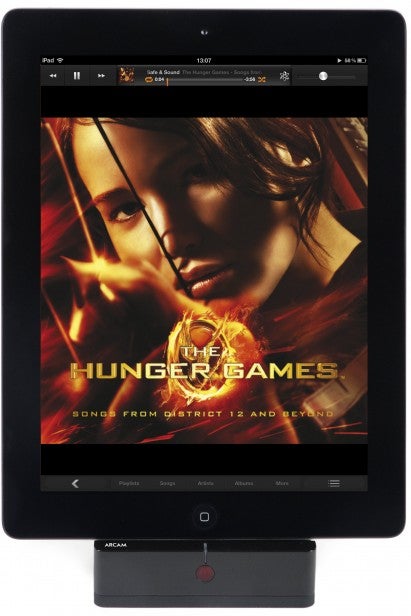 Grumbles? We have a few, but they are a little mean spirited. For example over HDMI the dock only displays video not images so it isn’t a complete Apple TV replacement and to hear just audio over your TV it will need to be connected via the analogue outputs meaning you need to switch between inputs for functionality. Then again, if you’re using this system to listen to audio through your TV’s speakers, you’ve got your priorities very wrong.

Ideally we’d also like to see a 3.5mm jack for outputting to headphones, though we can’t imagine many choosing this option with it plugged into an AV system or TV in the first place.

All of which leaves us with the question of price. The drDock takes a £50 jump from the irDock resulting in an RRP of £200. Casual listeners would no doubt opt for an Apple TV and £100 dock, but for those who value their music it is pretty competitively priced for the functionality and even more so for the performance. Do we recommend the drDock? Whole heartedly. 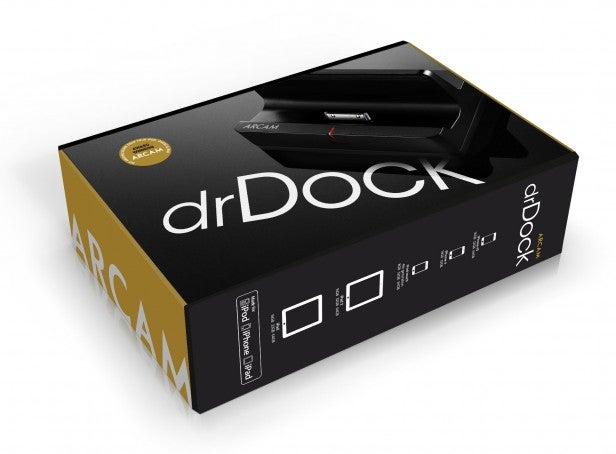 ”’Verdict”’
The Arcam drDock takes a major deviation from its predecessor, the irDock, and in doing so adds greater functionality, improved build quality and more universal docking options. The highlight of this iPhone/iPod dock remains its audio quality with the integrated DAC giving a master class in bolstering audio performance. HDMI will also prove useful for big-screen video playback, especially on Retina Display devices and works as a rudimentary media player. Still audio is the key focus and if you are into it then the drDock makes an ideal iDevice accessory.