Feed the AVR450 a Blu-ray soundtrack and it doesn’t take long to understand where your money’s gone. It’s an authoritative and insightful performer, blessed with an ability to expose the very smallest details of a movie soundtrack while keeping its eyes on the bigger (sonic) picture.

Don’t let the comparatively modest power rating fool you – the AVR450 is an absolute brute. We fired up Man of Steel on Blu-ray and Krypton’s destruction at the start has rarely sounded this epic. 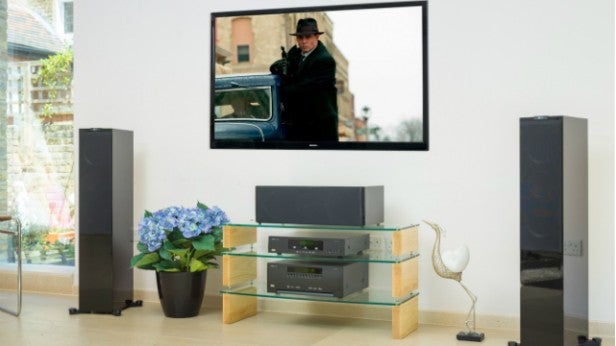 Five minutes in, when Russell Crowe escapes his captors and looks out over the ravaged Krypton landscape, the Arcam orchestrates the chaos brilliantly – huge explosions punch from the speakers then swell into the room, while spaceships roar past the camera with a visceral rumble and pan between channels smoothly. Its vigorous reproduction of the pounding score gives everything a sense of urgency and drama. This is home cinema at its most thrilling.

But what you get from the AVR450 that you don’t from most budget or midrange amps is a sense of poise and composure at loud volumes. Crank it up to foundation-shaking levels and the Arcam will slam effects into the room with extraordinary strength while maintaining a sense of sonic decorum. Most budget amps would start sounding comparatively uncivilised at this point.

When things come back down to Earth, the AVR450 gets a chance to show off its softer side. The exchange between Lois and Superman by his dad’s grave is accompanied by the chatter of insects in the background and the distant hum of traffic – all picked out with consummate ease by the Arcam. Its top-end is sweet and airy, resulting in an open sound that draws you in rather than closing you out.

This poise and attention to detail lends itself beautifully to stereo playback, living up to Arcam’s claims that the AVR450 is as musical as it is muscular. The warm jazz arrangements of Jason Rebello’s Anything But Look played from an iPod via USB (without the subwoofer engaged) are fluid and funky, benefiting from the Arcam’s clean, neutral tone and impeccable timing. Tinkling piano solos are crisp and sprightly, while walking double basslines are deep and agile.

It’s not all good news though – we tried playing a couple of high-resolution (24-bit/96kHz) FLAC and ALAC files via USB and the Arcam refused to play them, which is disappointing for a receiver aimed at audiophiles, particularly at this price. It happily played our lower resolution files, though.

Should I buy the Arcam AVR450?

The AVR450 is an expensive receiver, and that isn’t really reflected in the limited feature list or old-school operating system. With brands like Onkyo, Pioneer and Denon shoving all the latest tricks into their budget and midrange models, on paper the Arcam doesn’t look like great value.

But judging it harshly for a lack of cutting-edge features is missing the point. The AVR450 is aimed at buyers with big budgets who prize top-quality performance above all else.

And with outstanding build quality, plentiful connections and sublime sound quality, the AVR450 will be worth its weight in gold to cinephiles who want to experience movies in the best way possible. It’s one of the most musical AV receivers we’ve heard, although the lack of high-res audio support is hugely disappointing

Arcam’s sublime-sounding receiver will satisfy cinephiles seeking a first-class movie experience which is why we recommend it, but feature fiends and bargain hunters need not apply.